In a somewhat star-studded press conference involving industry stalwarts like Dibakar Bannerjee, Vishal Bharadwaj, Karan Johar, Anurag Kashyap, Vikramaditya Motwane, Rohan Sippy, Siddharth Roy Kapoor and Zoya Akhtar on the same stage with festival director Anupama Chopra, co-chairman Kiran Rao and creative director Smriti Kiran, the line-up of more than 175 films from all over the globe for the 18th edition of the Mumbai Film Festival — Jio MAMI MFF 2016 with Star — was revealed. New awards like ‘Best Film on Gender Equality’ and ‘Best Indian Female Filmmaker’ were announced, too, while the ‘Country focus’ this year will be on Turkish Cinema. The head of the jury was a pleasant surprise to many enthusiasts: renowned Portuguese filmmaker Miguel Gomes, whose last film, ‘The Arabian Night Trilogy,’ premiered at and swept Cannes. And it has also been announced that ‘Beasts of No Nation’ and ‘True Detective’ director Cary Fukunaga and Chinese legend Jia Zhangke will be conducting this year’s masterclass sessions.

But for most of us, (insert sponsor name) MAMI (insert next sponsor name) remains an annual pilgrimage — seven days of kid-in-a-candy-store-style film consumption, 4 or even 5 films a day, endurance, staying up late to whine and book next day’s show tickets on the website, bleary-eyed commute between two dangerously placed multiplex venues…the only week of utter and pure exposure to world cinema on the silver screen.

The programers have, of course, burned the midnight oil making sure our high standards and greedy expectations are met. There are, as always, much-anticipated titles that have made waves across all the prestigious film festivals, and a few that are missing (but we hope they’re squeezed in within the next week; our faith knows no bounds.)

Let’s get right to it then. Pardon the odd number but…
What are the 13 ABSOLUTELY DO-OR-DIE MUST-WATCH-AT-ALL-COSTS MOMENTUM-BURNING HYPED films this year?

World Premiere at Cannes, followed by well-received screenings at Telluride, Toronto and New York — which, in many ways, completes the holy quadrangle of festival-prestige in 2016. 100% rating on Rotten Tomatoes? Sure, that too. But more than anything, it’s Chilean filmmaker Pablo Larrain’s (remember ‘Gloria’? ‘The Club’?) SECOND film this year to make waves across the circuit. The other one, of course, is ‘JACKIE,’ the biographical drama about Jacqueline Kennedy (competed for the Golden Lion at Venice), whose star Natalie Portman has already been tipped for an Oscar for her unanimously praised titular performance. However, ‘Neruda,’ Chile’s official submission for the foreign-film Oscar category this year, is a powerful take on famous Chilean communist politician-poet Pablo Neruda, starring Luis Gnecco and Gael Garcia Bernal (need we say more?), who plays a fictitious police inspector on the trail of the great man of excesses.

Danish director Thomas Vinterberg returns to MAMI after four years (‘The Hunt,’ Denmark’s Oscar-nominated film in 2012 made a splash with a phenomenal Mads Mikkelsen performance) with this year’s Silver-Bear-for-best-actress winner at Berlin, ‘The Commune’ (Kollektivet). Though this wasn’t selected as Denmark’s official submission to the Oscars this year, the 1970s Copenhagen-based “melodrama,” based on his own stage play and experiences of growing up in a similar facility, explores the conflicts and adventures of a collective-living arrangement. It may remind many of how perhaps the founders of ‘Freetown Christiania,’ a real independent commune active from the ’70s on the outskirts of Copenhagen, may have come together and bickered to evolve their concept into a community that still stands today.

After ‘Clouds of Sils Maria,’ director Olivier Assayas returns (to MAMI, too) with a psychological thriller/drama/horror/hybrid that many critics this year have been unable to categorise into any single genre. Once again, the director re-teams with American actress Kristen Stewart (who he recently called “the best actress of her time”), to fashion an eerie narrative about an overworked fashion PA in Paris who attempts to get in touch with her dead twin. We’ll leave it at that for now. Mixed reviews and reception be damned. The trailer more or less confirms why this is probably the most anticipated film in festivals across the globe — and not only because Assayas shared the Best Director prize at Cannes 2016 with the next on this list…

Perhaps the most revered Romanian artist alive today, master filmmaker Cristian Mungiu returned to Cannes this year by snapping up the Best Director award with his latest — about a doctor and his efforts to enable his 18-year-old daughter on the verge of graduation and a long-planned scholarship. His last film, ‘Beyond The Hills,’ won the screenplay and actress award four years ago. But he is most remembered for his 2007 film that won the Palme d’Or, ‘4 months, 3 weeks and 2 days,’ the searing 1980s-set drama about two students trying to arrange an illegal abortion — dysfunctional and moralistic shades of which can be seen in ‘Graduation,’ too.

AFTER THE STORM (World Cinema; Japan)

The slow-burning contemplative relationship-dissolving Euro-arthouse style of Japanese director Hirokazu Kore-eda has found great success with Cannes over the years, with ‘Like Father, Like Son’ winning the Jury prize and ‘Our Little Sister’ competing for the Palme d’Or, too. ‘After The Storm,’ his latest family anti-drama, dwells on the complexities of melancholic equations and cross-generational tensions — about a once-famous novelist (Hiroshi Abe), now a petty private detective and gambling addict, whose father’s death and a typhoon forces him to get shelter in the same house and reconnect with his mother, ex-wife and son over a series of calm, subtle conversations through the night. As the Telegraph puts it in their review of this film, “No filmmaker today is watching ordinary life more closely than Kore-eda, or is more unfailingly generous with what they find.”

The Palme d’Or winner this year, and the Prix du Public winner at Locarno, 80-year-old British filmmaker Ken Loach’s latest populist masterpiece made him only the ninth director to win the Cannes award twice (after ‘The Wind That Shakes the Barley’ in 2006). This stark Newcastle-based drama — like most of his filmography — further tackles distinctly British and working-class social issues, this time telling the story of one disabled man’s battle against red tape to get welfare benefits. It stars standup comic Dave Johns in the titular (fictional) role and Hayley Squires as a single mother relocated to the cheaper town from big bad London. Perhaps many Indians will relate to the middle-aged man’s struggle more than most others, given the state of the similarly frustrating bureaucracy machinery here. Touted as perhaps the most moving and idealistic piece of cinema this year so far, this one’s at the top of most festival lists — much like last year’s Cannes-winning illegal-immigrant drama, ‘Dheepan.’

This year’s Venice Golden Lion winner is an expansive black-and-white 228-minute (nothing compared to his previous eight-hour saga, ‘A Lullaby to the Sorrowful Mystery’) moral deterioration opus by Filipino filmmaker Lav Diaz, who is known to consistently make cinema that explores the sociopolitical climate of his homeland. It tells the seething tale of a woman who, after 30 years in prison for a crime she never committed, gets increasingly disillusioned with the new 1990s system outside in pursuit of her missing son, and hatches a plan to exact revenge on a rich former lover who had framed her. Many have hailed this as a powerful and suitably restrained effort from Diaz, whose vast runtimes are stuff of legend though not quite outweighing the sheer immersive nature of his tales. Patience, though, is a must here.

THE LAND OF THE ENLIGHTENED (International Competition; documentary; Belgium)

This docu-fiction hybrid by photographer and debutant filmmaker Pieter-Jan De Pue won the Special Jury Sundance prize for Best Cinematography with footage shot over seven years with 16mm lens. It imaginatively delves into the mysterious land of war-torn and conflict-ridden Afghanistan, painting a dream-like landscape of the country through the drug-trade adventures and eyes of four groups of resourceful kids. The stunning topography and expansive visuals lend themselves to a big-screen 88-minute experience, though the jury is out on the combination and inconsistency of combining narrative fiction and voiceovers with non-fiction techniques.

One of the most absurdly surreal, thought-provoking, innovative and poignant feature-length evocations of recent times, this film about a lonely and suicidal man (Paul Dano) finding solace in the company of a farting corpse (Daniel Radcliffe) positions itself as a crass comedy but hits you smack in the face with its underlying themes of existentialism, mental illness, isolation and unrequited love. Bearing a very Michel-Gondry-ish energy of creative-play-acting and recreation-montages on a deserted island, the film has an undeniably optimistic soundtrack, making for the most unique and bafflingly emotional few hours at the movies this year.

Possibly the most intriguing of the independent Indian titles this year, debutant director Rohit Mittal’s ‘mockumentary’ is about a film crew shadowing an angsty, depraved and destructive auto-driver in Mumbai. So many of us have wondered what goes on in the frustrated minds of drivers who ferry the city’s commuters from one location to another; Mittal seems to have gone a step further and fashioned out the worst-case-scenario exercise in awry social realism, a visibly disturbing Raman-Raghav-ish atmosphere that doesn’t look like it will end well at all. How far can disillusionment drive a long-suffering soul? Can’t wait.

Another official foreign-language Oscar submission in the festival’s cap. But this time, the region makes all the difference. Touted as strict Saudi Arabia’s first ever rom-com, Mahmoud Sabbagh’s colourful and charming little first feature film explores the sizzles and pitfalls of love, between a simple civil servant and a social media celebrity, in the time of oppression and tradition. Working, both, as a sarcastic indictment of their times and a chaotic, verbose, multidimensional ethnography, this Toronto-selected film is a big leap forward for cinema in the country, and a miraculously upbeat product of ‘moderate’ censorship. Sure to be a crowd-favourite at most festivals, with audiences curious about the sights and sounds of modern Saudi.

Asghar Farhadi. That is all. The ‘A Separation’ and ‘The Past’ director’s latest is (again) his country’s official Oscar entry, and was not only nominated for this year’s Palme d’Or this year, but won Shahab Hosseini the Best Actor award and Farhadi the best screenplay trophy. Based on the life of a young Iranian couple — also actors (within the film) in the local rendition of Arthur Miller’s famous ‘Death of a Salesman’ — whose relationship is affected by moving into a house previously inhabited by a prostitute, this suspenseful and universally hailed film (read Owen Glieberman’s masterful Variety review) is bound to have desi delegates (including yours truly) slamming on the doors of multiplex halls and screaming for multiple+bonus screenings and extra queues.

A late but most exciting entry into the line-up. The minimalistic, beautiful, dialogue-less animated film about a marooned man trying to escape a deserted island by fighting a giant turtle took Cannes by storm this year, winning the Un Certain Regard special prize. Dutch animator Michael Dudok de Wit is best remembered for his Oscar-winning and all-winning animated short, ‘Father and Daughter,’ and his elegant first feature-length effort promises to be a hypnotic fable unlike any other at the festival this year. If his sense of music in his shorts, too, is anything to go by, this could just be the pick of the year. 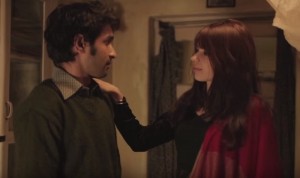 Other Titles that SHOULD NOT BE MISSED: