The meaty metaphors of Jallikattu & Aamis

Given a choice between the predictable and the prohibited, what would you go for? How far would you go to gratify your greed for the forbidden? Have you ever considered exhibiting your deepest desires in open uninhibitedly? Have you ever thought that what you are apprehending to be (ontologically) tabooed might just be a mere social construction or perhaps might have been the most normal thing to do in some other time and/or in some other place? What if, it is a desire for human flesh? Blasphemous! Isn’t it?

In Lijo Jose Pellissery’s film Jallikattu (2019), a group of villagers in Kerala form a herd to capture and kill a buffalo which managed to escape from the butcher shop. The hunt in medias res turns into havoc as in their lust for the pursuit of an animal, they themselves transform into one. In one such moment, a villager asks another in hushed tone:

“Do you know which is the tastiest meat in the world?”

The yearning for the buffalo meat, in that moment of orgy (from the Ancient Greek orgia meaning ‘secret rites’ for Bacchus), transcends into a yearning for the human flesh. This letting loose of the Dionysian impulse finally culminates into the formation of an esoteric geometrical shape resembling a pyramid. As both the beast and the butcher are sacrificed and buried underneath this human pyramid, the filmmaker juxtaposes and conflates the idea of the animal and the human, the prey and the predator, the society and the herd. In the film, meat is a metaphor of greed and gluttony, and also the latent anarchy which lurks beneath and haunts any so-called civilized society. 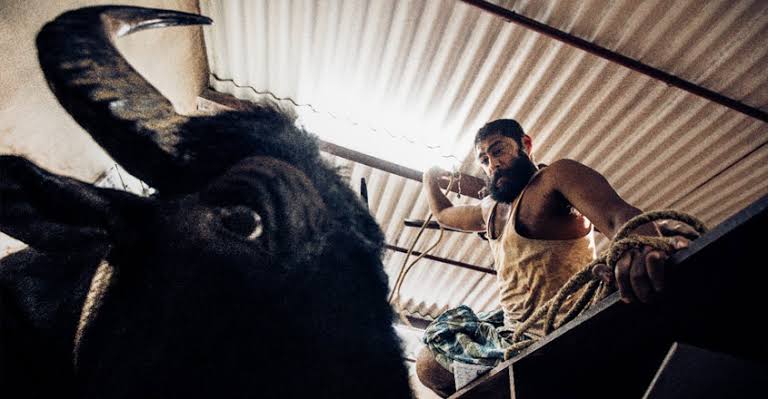 The word ‘cannibal’, in popular discourse, is attributed to Christopher Columbus in the mid-16th century. The origin is completely anecdotal. It comes from the Spanish Caribes meaning “Caribbean people” who were usually thought of to be man-eaters. The word, therefore, since its inception was meant to create a distance between the self and the other, the civilized and the barbarian, the European and the non-European. Not only were the cannibals considered as ‘others’, the ‘others’ were also believed to be cannibals.

It created a lot of stir in mid-18th century Britain when Jonathan Swift made a not-so modest proposal of children to be sold as meat to the English gentry as a possible remedy for Irish poverty in his quite (in)famous Juvenilian satire:

“I shall now therefore humbly propose my own thoughts, which I hope will not be liable to the least objection.

I have been assured by a very knowing American of my acquaintance in London, that a young healthy child well nursed is at a year old a most delicious, nourishing, and wholesome food, whether stewed, roasted, baked, or boiled; and I make no doubt that it will equally serve in a fricassee or a ragout.”

The fleeting reference in Jallikattu is very similar to another film which uses the phenomenon of cannibalism quite explicitly in its portrayal of metaphysical love. In Bhaskar Hazarika’s Aamis (2019), we find Nirmali, a middle-aged pediatrician, and a much younger Sumon, a PhD student working on the meat eating traditions in the North East and a bona fide member of the ‘Meat Club’, indulge in a collective quest for the forbidden. Although in love, they refrain from even the simple act of touching each other and consider anything physical to be a taboo. The boy in his effort to quench Nirmali’s appetite for meat, cooks every time with a piece of flesh cut out from his own body, and each time Nirmali devours the meat, she feels elated. The forbidden meat produces a kind of ecstasy, as we see in the film, running through her body. It is only after a mishap that they both are caught. This sudden discovery of the presence of a cannibal (a female Hannibal Lecter!) amidst the busy and mundane city life shakes everyone up from their complacency. A chill runs down the spine/streets of Guwahati. Finally, it is in the very last scene that we find the two lovers almost unflinchingly holding each other’s finger in front of a curious crowd.

The quest for meat and, in this case the human flesh, thus, becomes a manifestation (or what Sigmund Freud would call ‘sublimation’) of hidden desires: of love which is beyond any kind of societal definition, of a relationship where the self sacrifices itself part by part to the other without expecting anything in return, of a feeling which cannot be articulated through language. As opposed to Jallikattu, in Aamis meat is a symbol of selflessness and altruism. Whereas in Jallikattu, meat is a metaphor of hostility and aggression; in Aamis it is a metaphor of hospitality and tenderness.