There has been a lot to view in this decade. And a lot to resist. Stories keep the world spinning, they say.

Incessant storifying has made us momentarily enter and exit unseen microsomes and confront unfamiliar events, ideas, and lives. Which is possibly why our ever-changing fantasies of ideology, place, and identity keep jostling us around in pursuit of some new promised horizon and freedom.

Amidst this hustle and bubble, I am not sure how is one expected to know or see the bigger picture.

In times where the grandstanding idea of the nation rests in a faraway past or floats in an optimized future, Eeb.Allay Ooo! lays out an arrestingly uncomfortable view of present-day migrant life in the National Capital. For an hour and a half, it makes you exist in day-to-day quirks, anxieties, and struggles. The film is a rare immersion (sans saviour complex) of an unsettling India rife with monkey business, in perpetual conflict with its suffocating power structures.

Directed by Prateek Vats and written by Shubham, Eeb Allay Ooo! heads to the prestigious Berlinale this year. We speak to Prateek about the film, the response it has elicited and its socio-cultural significance. A graduate of the film direction course from Film & Television Institute of India (FTII), Prateek’s debut feature documentary, A Very Old Man with Enormous Wings, was awarded the Special Jury Award at the 65th National Film Awards. In addition to making films and teaching, Prateek has been involved with Ektara Collective in Madhya Pradesh and Collective Phase I in Kerala. 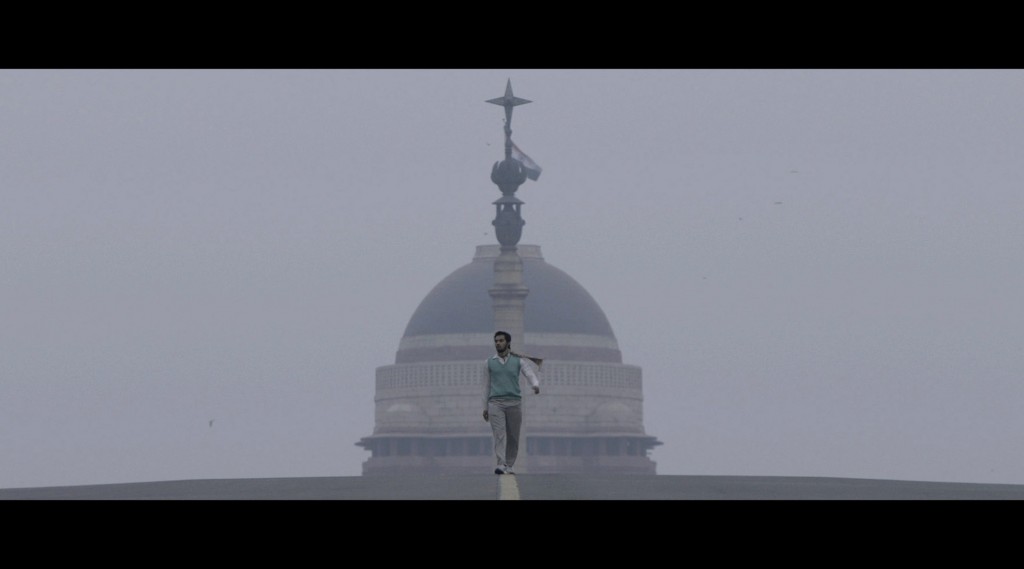 Congrats on Eeb Allay Ooo! making it to the prestigious Berlinale. It won the Golden Gateway at MAMI. Is it safe to assume, this film has a pertinent message to share?

The world we currently live in opens up many ideas for the fiction space. This film is a personal take by Shubham and me on various pertinent issues, laced with satire and humour – unfamiliar things in a familiar universe. In the film lies an excitement of the unknown, a sharp critique of the known. I believe that’s what the audience seems to have found in the film: a fresh perspective on the various societal issues as well as the cinematic craft used to articulate it.

What do you feel makes this film fresh?

It is the story of a young Bihari migrant labourer, set in the seat of power, Lutyen’s Delhi. By using the tropes of contractual labour, we’ve tried to offer a point of view of the Delhi migrant life and the power play that dominates it. The approach was not to be caught in the causality but to build a narrative that plays out the “small man” in a big system. Not many see Delhi as a migrant city. On film, it’s either the South Delhi excess or the nostalgia of the remnants of old Delhi. In all these years, it’s been Anamika Haksar, who has portrayed Delhi in a new way in her stunning film “Ghode Ko Jalebi Khilane Le Jaa Ria Hun.”

What makes Delhi a compelling subject?

It is a city that tried to hide its poor behind sheets of metal and tin during the commonwealth games. It is a city built on the labour of its migrants, but is too ashamed to even acknowledge their presence.

What inspired you to tell the story of a migrant in Delhi ?

Being a second-generation Bihari migrant, I have seen it from close quarters. My father came to Delhi at a young age. Growing up one learnt to negotiate the complexities and anxieties – how different the outside world you operate in is from the inside world you are raised up in. And after so many years, do you become a native or do you remain a migrant? Where to start? When does one being a native, a citizen, what does it mean? These were some of the questions that propelled us towards this narrative.

Shooting in Delhi, especially in the areas featured in the film, is no easy task.

We often get asked this question. I suppose Shwetaabh Singh (producer) and Neel Mani Kant (line producer) did a great job with arranging for permissions. I’m a great believer in the value of shooting fiction in public spaces. It was paramount the film was shot in the seat of power that it is situating itself in. Only permissions cannot ensure that. One has to move beyond the ideas that have come to define film shootings. It wasn’t an intrusive shoot where we were invading our locations, but rather a shoot where we learnt to negotiate consent and carefully consider the space and time we were shooting at. It was nerve-wracking experience that made us think on our feet and constantly question our ways. 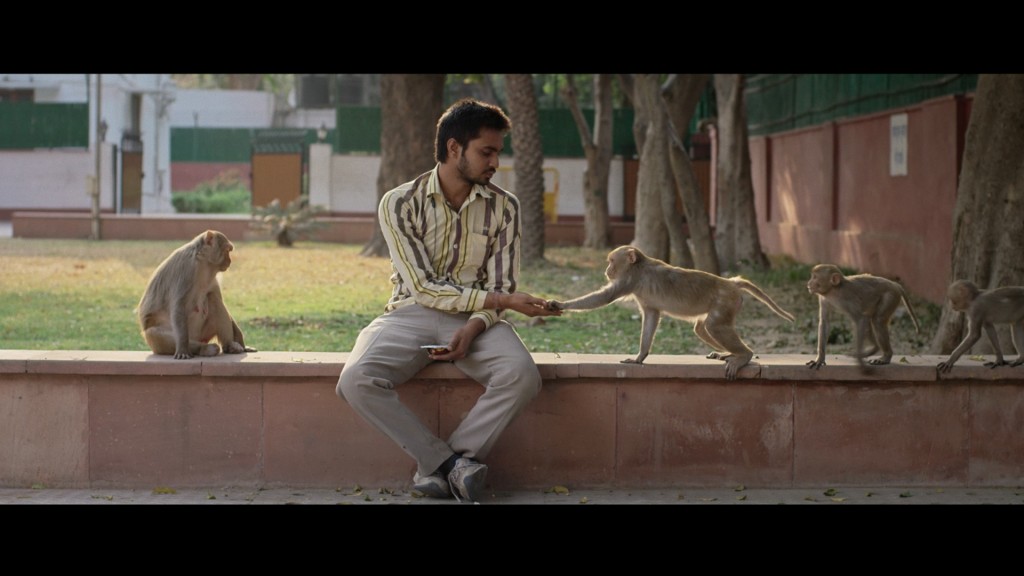 Shooting with the monkeys must have certainly kept you on your feet.

It surely did! They are not like cats and dogs. You can’t train them to act. So the only way for us to approach the filming was by letting go of the anxiety of being in control. We spent a long time figuring how to capture their coexistence with our human subjects. The collective experience of making documentary films helped immensely in this. We didn’t wish to force the fictional part, and were willing to wait. It wasn’t simply to capture the ‘nuisance value’ of the monkeys but to build a narrative around the entire universe they reside in.

The film has been on a screening spree. How do you think audiences has responded to the film?

The most heartening thing has been that varied audience has connected with the film on multiple levels – be it the overt satire or the portrayal of the class conflicts or the cinematic boldness of telling this story. The humour has worked very well across the various sections of the audience. One of the reviews called it – “the nearly un-filmable film” – that was quite special. Mentions of the film in the same sentence as films of Ken Loach have been humbling.

All of us ascribe to a certain idea of right and wrong, lean to the left or right. How does that influence you as a storyteller?

I feel as a society we are in the process of a transition. Post the 2008 credit crises, the cold war era nomenclature of isms – capitalism, socialism, and communism – need to be redefined. We can’t afford a one-dimensional viewing of the world that leads to other-ing and anger. We need an ism that deals with climate, labour, gender, and education proactively. These are investments, not subsidies, not co-curricular but essentials for a better society in the future.

In this film, we have tried to humanize the issues and struggles, rather than view them as concepts or labels. Our take is to show all that’s at play, how situations are created, how everyone can be a victim. Nothing is accidental; it’s all part of a larger design. Possibly, that’s how you try to reclaim humanity as storytellers.

What do you have to say about the current protests in Delhi? Do you think they can tackle the issues at hand, without viewing them as concepts or labels?

Protests are part of a process. They are not stand-alone events. A movement like Pinjra Tod has shown us the value of civil rights / students’ rights movement is not just limited to immediate and individual issues. The fact that women students have poured out onto the streets from countless universities is no surprise. It is the result of untiring work done by student groups over years.

It’s a great time to examine our idea of university education and our current attitudes towards them. These are institutions of high cultural capital, not a company where gains and losses can be calculated on an annual basis. If you do have to look at references from our past, look back at the figure of the ‘student’ in literature. The ‘student’ – the vidyarthi, the scholar was a well-respected figure. Today, instead of appreciation, there is a demonization of students for raising their voices and questioning the systems. The retort of “protest nahi, padhai karo” is ridiculous. Learning about democracy isn’t restricted to one civics class in primary school. You learn it through participation in public dialogue. In 2012, we all spoke of issues that a direct impact on our lives such as education, employment, inflation. Cut to 2019, what are our main conversation topics? Who is it that’s trying hard to talk about issues that affect us? Why is it such a big problem now?

As an alumnus of FTII, what do you have to say about its current climate?

The reports coming out of FTII for the past few years has left most of the alumni community very concerned. The latest in a long list of problematic steps taken by the admin is the unprecedented hike in the entrance test fee for FTII & SRFTII.

In most ways – whether it be this ill thought fee hike, systematic weakening of constitutional bodies like Academic Council or the constant harassment of students in the garb of “disciplinary actions” – is symptomatic of the larger problem of diluting the autonomy of public institutions like FTII & SRFTII. The government, rather than learning from the fiasco of 2015 student strike, is hell bent on using brute force and stonewalling constant appeals of the students and the alumni community. Hope, as always, lies with the student community who are resisting on a daily basis.

How did you benefit from film school, especially in the current filmmaking landscape?

It gave me a space to make mistakes, to get exposed to varied kinds of thought streams. I was exposed to various films and viewpoints, which I wouldn’t have found in the immediate universe I existed in. It helped in cultivating a worldview to engage with our own individual pre-occupations. One learns how to make films without the pressure of it being good or important. It offered a space to learn collectively. There are other aspects to deal with such as overcoming fears or how not to over-intellectualize the art. Film school for me was an important grounding experience. However, you’ve never had to go to film school to learn how to make a film. It’s not the case of a doctor who has to attend med school to become a surgeon. The filmmaking has been radically democratized. The traditional setup of producers, directors has been disrupted. Films are cheaper to make and this has led to collaborations and plurality of work being done.

In today’s times, what do you think is the impact of independent cinema vis-a-vis mainstream cinema?

We ourselves are trying to understand this. Independent films, no matter how good and relevant they are, are likely to be perceived as under-sale-able. As independent filmmakers, our skill-set is not distribution and funding. Eeb Allay Ooo! has been privately produced. Today it’s being talked about because it won at a prize at MAMI and is being screened at the Berlin Film Festival. For one such film, numerous equally good films do exist that don’t enjoy recognition or find audiences. Audiences need to proactively look for such films. As a society, we need to face these films. I hope that we can create a sustainable economic model for producing independent films.