Shlok Sharma’s ‘Haraamkhor’, which finally screened in India as part of the JioMAMI Mumbai Film Festival this year, has generated quite a bit of buzz over time. It won the SILVER GATEWAY award in the INDIA GOLD Section, behind Gurvinder Singh‘s hypnotic Punjabi-language ‘Chauthi Koot’.
Like Vasan Bala (Peddlers) and Neeraj Ghaywan (Masaan), Sharma too belongs to the ‘Anurag Kashyap School of Filmmaking’ – talented assistants who have gone on to make famous shorts, as well as stellar feature film debuts after being mentored by Kashyap.

Here, HEENA D’SOUZA speaks to him about this transition, the art of (assistant) direction, Anurag Kashyap and the story behind Haraamkhor. 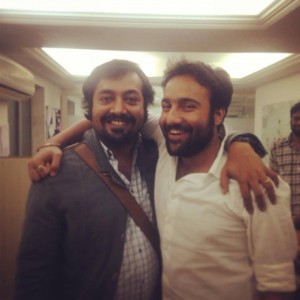 When there’s a transition from making a short film to making a feature-length film, there’s suddenly an increase in the scope of everything. Talk us through these changes you had to face while making Haraamkhor?

A. I started working from 2004 at the age of 19. I first assisted Vishal Bharadwaj for 3 years and then Anurag Kashyap for 6 to 7 years. Anurag sir always used to encourage me to make my own films. So in 2009, I made my first short film called ‘tubelight ka chand‘. Anurag didn’t like the film very much since it was mostly montages with no dialogues. What I learnt from that film was that I was only able to execute 40% of my vision of the film. That’s when I decided to improve my execution. Anurag told me that unless I make a proper film with characters, dialogues and a storyline, I won’t be able to prove my potential as a director. After that I made a film called ‘joy of giving‘, which was actually to be directed by Anurag Kashyap. But he was going to a festival, so he told me to direct it on his behalf. It is this film through which I learnt how to develop characters, and direct actors in particular.
The other important aspect of making a film is management. Hence one should always assist a good filmmaker to learn the management aspect of film making. As a first AD or associate director, you get to learn a lot because you are almost at par with director in terms of team management. Being an AD teaches you how to earn your respect on the set and how to lead a team. Also, to establish a stature where people bestow their faith in you and listen to you. So this experience helped me a lot.
And I also believe that a lot of people have this inherent quality to do something that is not taught to them. So my own passion and dedication towards the film is also something that helped me reach this goal. Also, I let my actors free to shape their character. I encourage them to give me feedbacks and inputs about their characters. I don’t control them too much because if you push them too much, it shows after a time that the acting is forced. Same is true for my writing as well. I try to be as organic as I can without forcing a story out of me. I try to complete my film in two drafts without prolonging it. I shot Haraamkhor in 16 days. So I didn’t have much time to invest. I used to shoot 17 scenes in a day, so there was not much time to think. It was also difficult for the actors because the graph of a character changes through the story and it is difficult for the actors to depict this transformation in such a short duration of the shoot. But thankfully, I had two very good actors, Nawazuddin Siddiqui and Shweta Tripathi. Apart from this, I enjoyed making this film overall.

You said that there are certain things that are inherent in you. So what born quality in you makes you a good director?

A. Anurag sir said in one of his interviews that ‘Shlok bahar ki filme nahi dekhta’ (Shlok doesn’t watch foreign films) A lot of people watch a variety of cinema and their stories are somehow inspired from one of these works. I, on the other hand, don’t watch too much international cinema, but I have their quality of absorbing things from my surroundings. I am a very keen observer. Most of my scripts seed from the things that I see around me. Hence you would notice that my films are very relatable and my characters portray real life characters in realistic situations.

And Haraamkhor is also based on a real life observation?

A. Yes, I had once read an article about such an incident – of a teacher having an affair with the student. And what struck me was the fact that we are very quick to judge people. When we read such things, the first impression of the people involved is ‘ kitni bigdi huyi ladki hai’ or ‘kitna badmash teacher hai’. We never try to comprehend what might be the girl’s background, her house environment or why the teacher is like that. And I thought that maybe I can show their side of the story through the medium of film. So we met a few girls who had such affairs, and what came out was that none of these love affairs had a happy ending. Secondly, even when we were looking for a location, we were a bit hesitant telling them what the film was about. But when we finally told the story to the house owner, he told us that there was one such music teacher who had an affair with his student and they finally got married. So this was the only story we heard which had a happy ending. 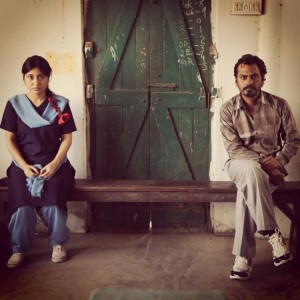 So what happens in your story – is it happy, sad or just a neutral account of such an affair?

A. Haraamkhor has two child characters and the whole love story between a teacher and his student has been shown from their perspective. For them, the relationship is humorous. How these two 11-year-olds perceive the relationship is what the whole story about. For them, the school teacher is the dark complexioned man in an affair with a fair-looking pretty girl. They don’t see the depth or the gravity of the relationship or the situation. Neither are they judging it in a stereotypical ways. Even the lead characters have not been shaped or made to behave in a stereotypical way.

I watched your short film – Sujata. How difficult is it to work with kids on a subject like this? There was a short scene where the boy had to pull up the girl’s frock. How do you direct such scenes?

A. 3 or 4 year olds are very curious and impressionable too. And incidents like these are very common at this age. So it is even more difficult to deal with kids on a subject matter like this. Even though it was a split second shot, I had to tell the boy pull the girl’s skirt and you don’t know how the kid understands and how will he interpret the shot. So yes, it is very difficult. And not just kids. Even when I had to direct Shweta to do an intimate scene, it was difficult for me. You have to achieve a certain level of comfort with your actors to be able help them with such roles and scenes. There are a whole lot of processes that goes behind such performances. Having a lot of discussions about the film and about the role definitely helps.

A. I have 5 to 6 feature film scripts ready – all bound and registered. I am just waiting for someone to produce them.

A. My very good friend Vasan Bala – I really like his work and sensibility. I have learnt a lot from him. I really like Harshwardhan’s ‘Hunter’ – that released earlier this year. I have also heard a lot about Avinash Sharma and Kanu Behl as well. I like Alia Bhatt a lot; she is going to do dhamaal someday. I just know it. Her potential hasn’t yet been unleashed onto the world. If given a chance, I would definitely like to work with her.