“A director must help everyone achieve their dreams.”

FTII graduate Ruchika Oberoi won the FEDORA award for Best Young Director at the 72nd Venice Film Festival earlier this year for her debut feature, ‘Island City’. Produced by NFDC, the film had its Indian Premiere at the JioMAMI Mumbai Film Festival 2015, and received a fair amount of praise for its restraint and balanced narrative, which alternates between three disparate stories in the city of Mumbai.

Here, she speaks about her film, its process and the importance of being able to write your own films. 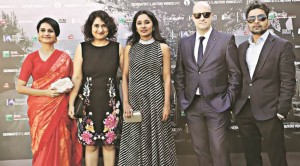 How did you make ‘Island City’?
A. The process began with the writing – which took quite some time, after which the film was taken to the Screenwriter’s Lab (2012), where I had talks at length about the script with my mentors. Post this, I started looking for the right producers to make this film and NFDC stepped in to produce. The experience of making the film was very interesting as it made me re-discover the city through the lens. It is a film which has been shot outdoors on the streets as well as inside the big glass monoliths of corporate Mumbai. From the time I have come to Mumbai, the city has changed a lot. So re-connecting with the city via our process of recce was an exciting experience.

What is it about?
A. Two of the stories are black comedies and another one is a tragic love story. Mumbai can be an alienating place for people who come from outside to work or for singles living in the city; it can be daunting by its sheer sprawl and magnitude. It has a different texture, which tends to alienate. Mostly each story is talking about loss of agency i.e. you not being able to control your destiny, or not being able to do what you want to do, and being dominated. Each person is battling being controlled and thereby trying to re-gain control. There is a different type of rebellion in each story. There is a hint of absurdity. Sometimes you find a release, other times you don’t. I have tried to bring these forth by using black comedy elements. Also, I find contradictions interesting and have explored them thematically in my film.

Coming from a film school, do you think you have an inclination to concentrate more on content rather than feeding on tested formulas of the commercial format?
A. There can be no generalization. There are people doing commercial work. There are also people doing work that is not just commercial but also intelligent and story-driven. There are interesting film makers like Vinil Mathews (Hasee Toh Phasee) and Harshvardhan Kulkarni (Hunterrr). There are many of them into advertising and documentary-making. So there’s a wide variety of people. Because we watch a lot of world cinema, we do tend to gravitate towards it. But again there can’t be any generalisation.

How do you think getting a formal educational training in cinema has shaped your sensibilities as a film-maker?
A. Firstly, we managed to see the best of world and Indian cinema. Just to be able to watch those films was an incredible experience. Secondly, filmmaking is a highly equipment-intensive work. Being in the film institute (FTII) helps you get all that. Plus – we have teachers who guide us and workshops with eminent filmmakers. One advantage of being here is that you get to have a style of your own, to have the time and space needed to experiment on your own and to discover something new. You get to write what works for you and find your own concerns and voice.

You are also the writer of your film…
A. I was always interested in writing. Right from my school days, I would write articles, poems etc. From the beginning, I had this idea to write and make my own film. For me, the writing process really helps me grow, and not just professionally. Coming up with something original, and fleshing-writing-exploring it is an interesting and valuable process. I still consider myself to be a writer-director. For me, I was a little more confident with my writing because writing gives you that space. You can keep reviewing your work and spend months on it. There are no definite rules. In terms of directing, you don’t have that luxury, as a lot of decisions have to be taken in the moment. So film-making is essentially a combination of both.
However, it should not be necessary for a director to also write his/her own stuff; there are so many famous directors who never wrote. Also, another thing is that in the industry, there isn’t incentive for writers to write. They are not well paid or encouraged enough. Everyone thinks they can write. If you are a director who wants to make his film and don’t want to write, it becomes a little difficult to come across the perfect script you would like to make. It’s not easy. It would involve matching perspectives and visions, which isn’t always possible to do. It’s not necessary for a writer to direct or director to write, but there are people who prefer to do that.

What do you think is the most important quality a film director needs to possess?
A. I would say that it is very necessary for a filmmaker to be courageous. Every individual has his own way of thinking and has his own quirks. One must not as an artist, try to emulate anyone else’s style or repress your own originality in order to be in line with accepted forms. So, it is necessary to keep that individuality alive. That’s the one thing that will distinguish you from a hundred others. Another important aspect is to be able to work in a team and to be able to see and recognise the dreams of everyone else attached with the film. To know that it holds meaning for everyone and help them achieve their dreams is very important.

What are the challenges you faced while making the film?
A. Creatively, it was a challenge to find right faces and actors who would be able to embody the kind of acting style I was looking for. The second and third story required a very natural style, so we had to find people who would play it realistically. Vinay Pathak’s story needed a deadpan style, which he brought out beautifully. We had a small television serial bit in the second story. Here, the challenge was to do a parody without being too self-aware. Also, there were budgetary restrictions, so we were fighting that as well. Also, for me, it was challenging to balance the three stories out so that each story has its own space and did not dominate the film. The structure is very important.

And the casting?
A. I always had Vinay Pathak in mind. He was the first person I sent the script to. When he liked the script and was willing to act in it, it gave me a lot of confidence. He also suggested Tanisha Chatterjee’s name for the third story and I found her to be perfect for the role. For the second story, we did extensive auditioning and found Amrita Subhash. She has the vulnerability that was needed in her character. A lot of people who acted in the television serial parody are television actors, yet they managed to catch the meter very well.

Do you think being a woman film-maker brings added responsibility to showcase the female sensibilities in an otherwise male dominated scenario?
A. I don’t feel I have to bring out the female sensibility in an overt manner. I am a woman and that has shaped my consciousness and will pervade into what I write or do. So, for me to do anything extra will ruin what I am trying to say. It comes out naturally.

What next?
A. I have a couple of scripts. One of them is a children’s film. As soon as I am done with Island City in totality, I will start working on my next project