Every summer, the king of fruit mango returns to satisfy the palate of the Indian people. Its return also restarts the debate on social media if it is overrated. Mangoes are quite popular in pop culture as well. They find a place in non-political interviews where Akshay Kumar asks the prime ministerial candidate about his preferred way of eating mangoes. Hari Kondabalu talks about the love Indians have for mangoes in his Netflix Specials. Katrina Kaif romances mangoes in her (K)amasutra ads in the gorgeous backdrop of Orchha.

Like other things, Hindi cinema has also portrayed its love for mangoes in films. One of the earliest instances of mangoes in cinema is in Dadasaheb Phalke’s silent film Kaliya Mardan. The film depicted the story of Lord Krishna’s victory over the snake god Kaliya. In a particular scene, a young Krishna is given a gift of mangoes which he gives them away to someone else. Thereafter, the screen shows a message that says that the particular act foreshadows Krishna’s benevolent nature. The biographical film Mirza Ghalibshowed the poet’s immense love for mangoes. At one point in the film, Ghalib and his friends are discussing the merits of mangoes. Ghalib prefers them over sugarcane because they offer a contrasting tartness that balances the sweetness, while sugarcane is too sweet. He then goes on to speak a couplet in praise of the fruit. One of his friends points to a donkey who does not eat them when offered and says even a donkey does not eat mangoes. Ghalib cheekily replies that it is only the donkeys who do not eat mangoes. 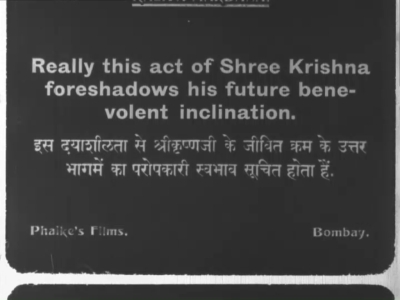 In the iconic Sholay, Veeru (Dharmendra) teaches Basanti (Hema Malini) how to shoot mangoes in the grove as she needs them to make pickle as asked by her aunt. However, she realizes that he is more interested in physically harassing her and ends up admonishing him for his behavior. In Mere Apne, after the death of her husband, Anandi (Meena Kumari) lives a quiet life in her village. She has a small house and a mango orchard. When a relative asks her to move to the city, she refuses as she feels the mango trees have grown old with her and she does not want to leave them.

Mangoes have been used to express love in many films. In Waqt: The Race Against Time, Ishwarchand Thakur (Amitabh Bachchan) tells his son Aditya (Akshay Kumar) that mangoes are known by their smell. At a later stage in their lives, Aditya is miffed with his parents as they want him to become responsible, so, he stops talking to them. Ishwarchand still sends mangoes to him through someone and tells them to not disclose the same to him. However, Aditya can easily guess that mangoes are sent by his father which he then goes to return to his father. Ayan Mukerji shares a particular fondness for mangoes. In both of his films, parents express love for children by bringing them mangoes. In Wake Up Sid, Sid (Ranbir Kapoor) loves mangoes. His mother (Supriya Pathak) brings a box of mangoes when she visits Aisha (Konkona Sensharma) when he starts living with her after a feud with his father. In Yeh Jawaani Hai Deewani, Bunny (Ranbir Kapoor) comes back late to his house again and his father (Farooq Sheikh) who was waiting for him says that he has bought mangoes for him. 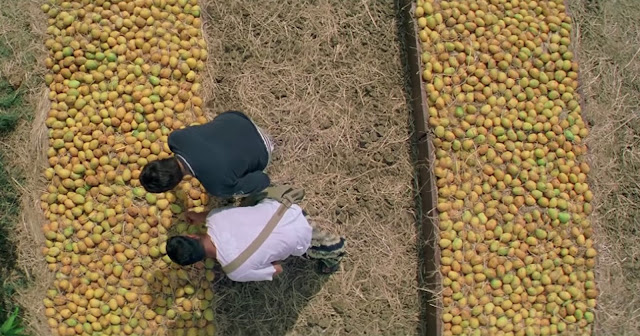 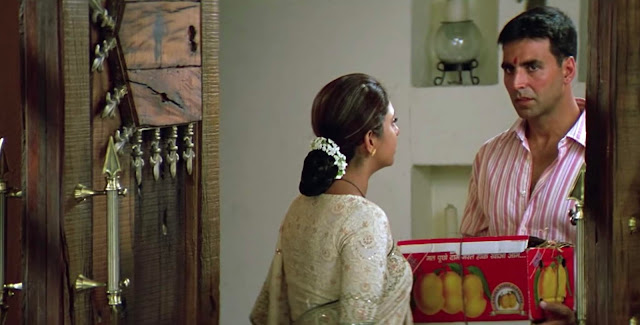 In Qarib Qarib Singlle, Yogi (Irrfan Khan) asks Jaya (Parvathy) about her choice of mangoes, whether she likes Safeda or Dusehri. Safeda mangoes are eaten after cutting them in pieces, while Dusehri mangoes are eaten after squeezing and slurping. But his recommendation is that the opposite should be followed as Safeda mangoes when slurped, they become divine. He says that she is missing out on the enjoyment in life if she has not slurped the mangoes. In a way, he is making her aware of the things she is missing out in life. Thereafter, he gifts a box of mangoes from his home garden to her on their second date. In Secret Superstar, Chintan (Tirth Sharma) brings Insia (Zaira Wasim) to his home and his mother brings them mangoes to eat which they happily enjoy. 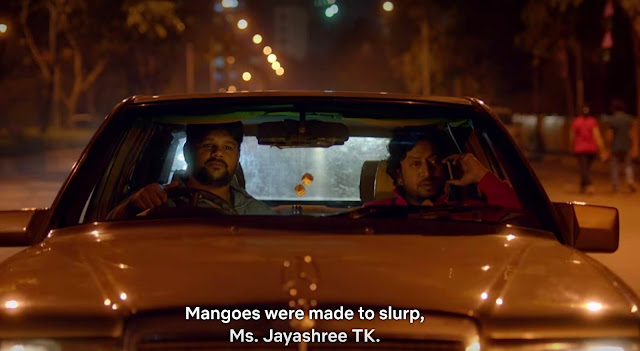 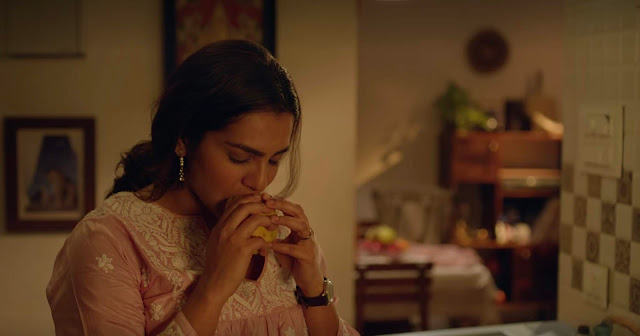 In Yes Boss, Rahul (Shah Rukh Khan) hatches a plan to spend time with Seema (Juhi Chawla) in Switzerland where he entices his boss Siddharth (Aditya Pancholi) with a lucrative business deal. He calls his boss and pretends to be a big mango businessman named Abus Aamwala looking for advertising agencies. He calls him for a meeting where they will identify each other by carrying two mangoes in their hands. Siddharth turns up with mangoes on the streets but Abus Aamwala never shows up and Rahul’s plan, like always, succeeds. In Dabangg, Makhanchan Pandey (Arbaaz Khan) agrees to do anything for Chedi Singh (Sonu Sood) to get money for his father’s treatment. Chedi Singh orders him to deliver a crate of mangoes to Dayal Babu (Anupam Kher). But, unknown to Makhanchan, there is a bomb in it. After he leaves the house, the bomb explodes, killing Dayal Babu and his workers.

In Badhaai Ho, Jeetender Kaushik (Gajraj Rao) brings a box of mangoes for his family which he does not share with either his neighbors or subordinates. His family members enjoy the mangoes while praising the Langra variety of mangoes. In Aashayein, a cancer-stricken Rahul (John Abraham) meets people from different backgrounds in the rehabilitation center. One of them is a young boy named Govinda (Ashwin Chitale) who loves comics and mangoes. After a health incident, Govinda offers Rahul mangoes becomes his aam vale dost. In Ishaqzaade, Zoya (Parineeti Chopra) loves to eat mangoes and calls her smile mango-sweet when she wants to something from her father. Himesh Reshammiya gave us a song Mango in the film Damadamm!. In the said song, he claims that he misses his lover like mango.

In the upcoming Meghna Gulzar film Chhapaak, Deepika Padukone will portray the role of acid-attack survivor Laxmi Agarwal. Reports say Deepika jokes that she agreed to do the film because of a scene where she gets to eat kairi (raw mangoes) with salt and red chilli powder in the film.

Mangoes have been used in films where they have been exported to other countries. In Cocktail, Meera (Diana Penty) arrives in London along with a box of mangoes. In Parmanu, the Indian bureaucrats advise the minister to stop the export of Alphonso mangoes to China after the neighboring country conducts another advanced nuclear test. Happy Bhaag Jayegi opens with an India-Pakistan conference where it is announced that India will start exporting mangoes to Pakistan.

The town of Malihabad is internationally renowned for its mango plantations. There have been many instances where films talked about the mangoes from there. In Lakshya, Captain Jalal Akbar (Sushant Singh) is from Malihabad and asks Karan (Hrithik Roshan) if he likes mangoes. As per him, one can really enjoy eating mangoes only in a mango orchard. Akbar asks Karan and his friend Captain Sudhir Mishra (Abir Goswami) to visit his mango orchard. Fate, however, had different plans as Akbar dies in the war. Dhobi Ghat opens with Yasmin (Kriti Malhotra) introducing herself to a taxi driver where she says she is from Malihabad, the place known for its mangoes. Although it is not shown in the theatrical version, the film’s script mentions that Arun (Aamir Khan) decides to visit Malihabad after he learns about Yasmin’s identity. Shyam Benegal’s Junoon was shot extensively in Malihabad and in the song Sawan Ki Aai Bahar Re, the women sing about rain and love while surrounded by the mango trees. 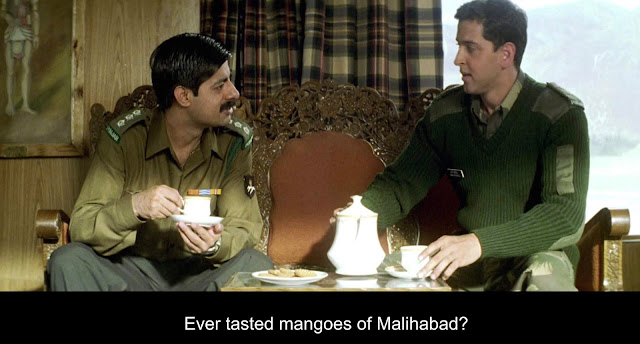 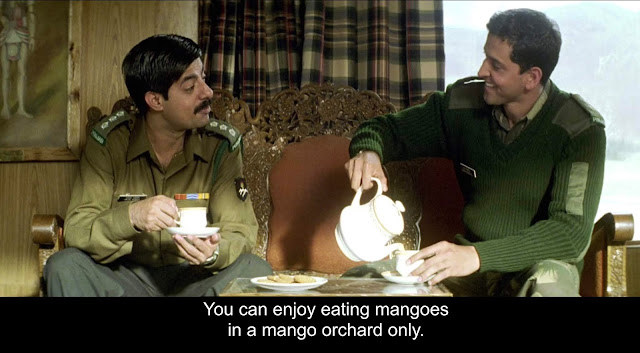 There have been other mentions of mango as well in films. In many films, a woman asking for raw mangoes was construed as a sign of pregnancy. In Love Aaj Kal, Jai (Saif Ali Khan) says that the lovers of today are the mango people, another term for aam aadmi, and their love stories are not immortal. These mango people want to live with their lovers in this lifetime. In Piku, Bhaskor Banerji (Amitabh Bachchan) compares the color of his shit with that of the mango pulp. In Bajirao Mastani, Maa Saheb (Tanvi Azmi) compares the life of royals to a mango tree. She remarks that even though mango might be the king of fruits, but it is the one that has to bear the most stones. In Bunty Aur Babli, Vimmi (Rani Mukerji) wants to run away from her house because she does not want to make mango pickle all her life. Films, such as Kairi and Mango Soufflé, have been titled after mangoes. Other films, such as Quick Gun Murugan, Out of Control, and Paying Guest, have characters named after mangoes.

The above were only a few instances of mangoes from films. I am sure I am missing a large swathe of other such instances from films, especially, those from the seventies and the eighties. If there are any of the memorable mango moments, write about them in the comments. Till then, keep eating more mangoes and eat one more on my behalf.