Law and courts have been a staple theme in films. From the early days, courts have been shown frequently in films. Cinema is also abundant with lawyer characters. Since law is a significant part of our daily lives, it has had an impact on cinema. Conversely, it is worth investigating if films had an impact on law. The following paragraphs try to explore some real life court cases which involve some kind of inspiration from a film. There are numerous cases, often frivolous, involving films, but the following include only those where the judgement referred a film or a character from a film to make its point clear, while the case has little connection to that film. To clarify, this is not about films that are based on real life cases (there are plenty of those), but about those where the judgement used a film to make its point. 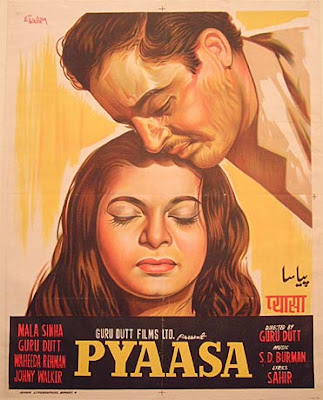 In 2011, the Supreme Court bench of Markandey Katju and Gyan Sudha Misra dismissed the appeal of a man, accused for brutally murdering a sex worker, in the case Budhadev Karmaskar v. State Of West Bengal. The Supreme Court converted the appeal into a public interest litigation on the rehabilitation of sex workers. The judgement asked for the compassionate treatment of sex workers. It gave examples of characters of prostitutes with a golden heart from literature. It, then, also cited Sahir Ludhianvi’s poem Chakle sung in Guru Dutt’s Pyaasa (1957). The judgement said, “In the novels and stories of the great Bengali writer Sharat Chandra Chattopadhyaya, many prostitutes have been shown to be women of very high character, example, Rajyalakshmi in Shrikant, Chandramukhi in Devdas, etc. The plight of prostitutes has been depicted by the great Urdu poet Sahil (sic) Ludhianvi in his poem Chakle which has been sung in the Hindi film Pyaasa, Jineh Naaz Hai Hind Par Wo Kahan Hain.” It is a thoughtful judgement, and also quotes a sher by Mirza Ghalib and Fyodor Dostoyevsky’s Crime and Punishment. Justice Katju refers Pyaasa again in another similar case involving some women who were asked to vacate their house because of indulging in singing and dancing as the police believed they were prostitutes. The court directed the police to not forcefully vacate the women, and again asked for humane treatment of prostitutes. The court, in its order, said, “The plight of prostitutes in India has been vividly depicted, and this poem has been sung (with some modifications) in the Hindi film Pyaasa. Hence, the approach of society towards the prostitutes must change, and sympathy must be shown towards them as it must be realized that they are not necessarily women of bad character but have been driven to the profession due to acute poverty in their family.” Sahir’s poem is also referred in other cases, such as the one involving the death of a man while in custody of the Delhi Police, that also caused a political controversy.

Sahir Ludhianvi makes another appearance in two other cases related to dowry harassment. The cases involved women complaining against their husbands, and in both the cases, the women lost. Dr. Kamini Lau gave the judgement in the cases. She quoted Sahir, and advised the women to get out of discordant marital relations. The court said, “Taaruf rog ho jaaye to usko bhoolna behtar; Taalluk bojh ban jaaye to usko todna achcha; Wo afsaana jise anjaam tak laana na ho mumkin; Use ek khoobsoorat mod dekar chhodna achcha.” It is better to forget one’s particular identity if it becomes diseased and to break one’s relation if it becomes a burden. The story which cannot be concluded properly, should be abandoned at an honourable stage. It is a beautiful message on letting go. Though the court does not mention the film, these words are from the famous song Chalo Ek Baar Phir Se from the film Gumrah (1963), directed by B.R. Chopra. The movie is about the conflicts of a married women, when her lover comes back to her life. There is an interesting personal connection of Sahir Ludhianvi with the song, and is beautifully explained here. 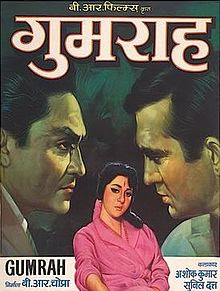 In 2016, there was the highly controversial case Kanhaiya Kumar v. State Of NCT of Delhi. Kanhaiya Kumar was arrested and charged with sedition for raising anti-India slogans at Jawaharlal Nehru University in New Delhi. The Delhi High Court granted bail to him, and made critical observations on the people who indulged in the alleged sloganeering. The order began by quoting the song Mere Desh Ki Dharti from Manok Kumar’s Upkar (1967) to describe the love for motherland. It reads, “This patriotic song from Upkaar by Lyricist Indeevar symbolizes individual characteristics representing by (sic) different colours and love for motherland.”

“Rang hara Hari Singh Nalve se,
Rang laal hai Lal Bahadur se,
Rang bana basanti Bhagat Singh,
Rang aman ka veer Jawahar se.
Mere Desh ki Dharti sona ugle
Ugle heere moti mere desh ki dharti.”
In 2004, Gauhati High Court gave a judgement in the State Of Assam v. Holiram Bordoloi. The case involved the brutal killing of three persons by the said accused. The crime involved a scene similar to Ramesh Sippy’s Sholay (1975), and the judgement cited the scene of the amputation of the arms of Thakur by Gabbar Singh in the film, It said, “Other victim was pulled out from his house and he was cut in such a cruel manner that both of his arms were amputated as if the accused was trying to re-enact the scene played in the famous Hindi movie Sholey (sic).” In 2005, a judgement described the atrocities committed on a woman by her family using the example of the film Sargam (1979). The court wrote, “She (the appelant) was threatened that she would be assaulted with firewood as shown in Hindi movie Sargam.” Sargam, directed by Kasinathuni Viswanathis, is the story of Hema (Jaya Prada) and Raju (Rishi Kapoor). Hema is ill-treated by her stepmother, who wants to sell Hema in the guise of getting her married to a much older man. Raju, a musician, comes to her aid out of compassion, and assists her achieve her goal of becoming a dancer. The film also had the popular song Dafaliwale Dafali Baja. 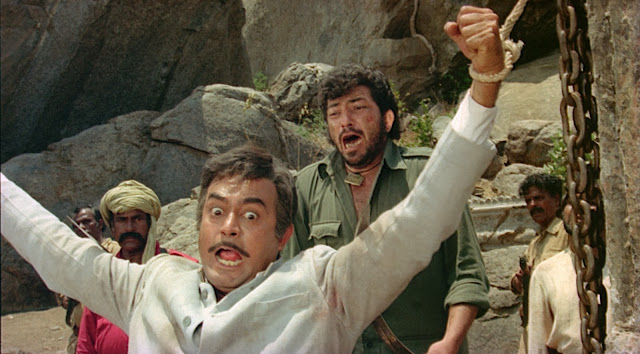 In 2007, the Madras High Court gave judgement in a case involving cheating in examinations using technology, in a teacher training college. The court wondered if the students got new ideas from films or if it were the films that depicted real life moments. The court cited Raj Kumar Hirani’s Munna Bhai M.B.B.S. (2003) as an example where cheating using technology was depicted. The Madras court began its order by saying, “The facts projected in the writ petition herein depict the modus operandi of the heroes of the films Vasool Raja MBBS (Tamil) and Munnabhai MBBS (Hindi). One begins to wonder whether our youth gets ideas from the movies or the movies are portraying the real life situations. While such debates may continue, the degeneration to which the petitioners have descended to, will shock one and all.” In another similar case in 2012, involving a medical college, where a similar cheating methodology was used, the Madras High Court cited the film again in its order. The order’s first paragraph read, “Whether the movies like Munna Bhai MBBS and Vasool Raja, MBBS is based on fact or fiction? The question in this case reflects the story line of the film in which the hero of the film uses a hi-tech device for copying in the examination and get his MBBS degree. The present case also showed that the petitioner and seven others have used similar techniques for writing their examinations.” Munna Bhai must be feeling proud that he has inspired many a student by his shenanigans. In a highly frivolous case that has to be only read to believe its absurdity, the order mentioned a film of Shah Rukh Khan. The case concerned the release of Homi Adajania’s Finding Fanny (2014), that starred Deepika Padukone in the titular role. The petitioners sought a ban on the film because they believed the word Fanny will hurt the feelings of citizens of India especially immature brain of minor children. The court disagreed with the petitioners and cited other examples where the word Fanny had been used, such as Fanny Price (in Jane Austen’s novel Mansfield Park), and Aunt Fanny (in Enid Blyton’s The Famous Five). It goes on to mention King Uncle (1993), starred Jackie Shroff, Anu Agarwal, and Shah Rukh Khan. Anu Agarwal’s character was named Fenni. The order said, “In the Hindi movie, King Uncle, released in the year 1993, the name of the lead female character was Fenni Fernando pronounced as Fanny only and the said movie also had a song with the lines of Fenni Ne Mujhe Bulaya. It is, thus, not as if the Indian movie viewers would be exposed to the name Fanny for the first time.” Not sure about people, but the court remembered the film and the song.

One of the most thought-provoking judgements by any Indian court is by the Calcutta High Court on the issue of copyright in 2003. The case involved Karisma Kapoor’s television series, Karishma—The Miracles of Destiny, that aired on Sahara One. The suit was filed by Barabara Taylor Bradford, author of the book A Woman of Substance claiming that the show was a copy of her book. The court ruled that her lawyers had failed to establish conclusively that it violated copyright law. In a detailed judgement, the court explained the meaning of copyright and cited Satyajit Ray’s film Ganashatru (1990) to make its point. The film, starring Ray’s favorite actor Soumitra Chatterjee, was based on a play called An enemy of the people, written by Norwegian playwright Henrik Ibsen. The title Ganashatru also means enemy of the people. Ibsen’s play is the story of two brothers. One, a scientist, who discovered that the new baths built in his town are infected with a deadly disease and instructs the town to close the baths. However, his brother, who is also the mayor of the town, did not believe the report and refused to close the baths as it could cause the financial ruin of the town. Ray adapted the play to an Indian setting where a doctor discovered that the serious illness befalling the citizens of his small Bengali town may be due to a contamination of the holy water at the local temple. His brother who looks after the temple refused to take action as it would threaten the temple. The court compared the play and the film in the judgement, and underscores that the central theme might be the same in both the play and the film, but they are based on an idea, and an idea can be borrowed. It said, “A superficial examiner would say from a comparison of the play and the movie, that the film has been copied. That might be the reaction of the layman, no doubt. But it is not a copy, according to the copyright lawyer. Although the central theme is the same, it is but an idea. The idea is novel and no doubt the idea is central to the creation of a dramatic conflict. Once the idea of this conflict is conceived by a dramatist, it becomes much easier for a future dramatist to write a play on the same theme.” It is a really fascinating judgement explaining the intricacies of copyright law, and also refers Shakespeare’s Othello. 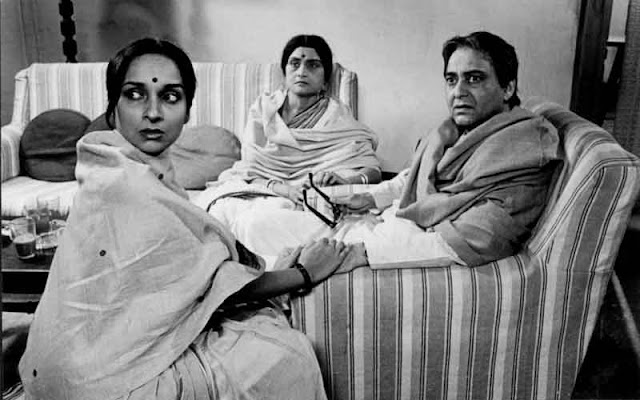 The above citations are by no means exhaustive. They are plenty of other cases, but challenges in search make it a little harder to find the relevant ones.

As a court order mentioned, it is often worth wondering if it is art imitating life, or life imitating art. Even judges are not immune from the magic of films, after all, they are humans, too.