Somehow, even today, if one has to get nostalgic about school days, Rockford is the one film that immediately springs to mind to garnish those simple memories. If one has to identify a memorable and relevant Rajasthani tale out of the millions of ‘rustic’ stories shot there, the woman-centric ‘Dor’ is near the top of the list. If one looks deep within the annals of Hindi films to identify a genuine, original underdog sports film, it’s Iqbal before all the glossy Bollywood biopics. You’d think such distinct films – based in vastly different environments and eras – can’t have been made by the same guy. But that’s what Nagesh Kukunoor has done through the years, through all his successes, risks and failures. He is anything but a ‘comfort-zone’ director with a fixed genre. Change is the only constant in his vivid world of stories. Even his failures are far more fascinating than the industry’s most obvious hits.

Dhanak, his latest, a charming little tale about two siblings traveling through Rajasthan, was honoured with the ‘Grand Prix of the Generation Kplus International jury’ for the best feature-length film at the 2015 Berlin International Film Festival.

Here, HEENA D’SOUZA chats with the man, who was one of the first contemporary filmmakers to bring the spirit of Independent cinema to India. 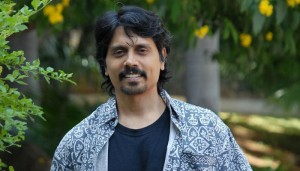 A. You can approach a character in different ways. I don’t set any rules. I write most of my stories organically, and through that process, the characters emerge. Yes, there are certain instances where you do envisage a certain character which might trigger the whole film, but most of the time, I have a general story, and I just go with the flow. The kind of story writing that I like do is not predominantly plot-driven. I just start writing it and let the process dictate the plot and its characters. So, even the characters emerge out of the process.

Where do your stories come from? Are they a product of your observations, or do you like imagining a whole new world?

A. Stories come from a variety of sources. Sometimes, it’s the articles you read or things that people say. Sometimes, they are about several things that you want to write about or express. There are certain kinds of stories I want to do. Iqbal is a classic example of a story I always wanted to do. I always wanted to write an underdog sports saga. ‘Teen Deewarein’ happened because I always wanted to write a prison film. You know, it can sometimes arise from the point of wanting to write a certain kind of film, and through this process, you develop the story. But otherwise, there are examples like ‘Lakshmi’, where a real-life incidence can trigger a story. No rules here.
If you see my filmography, I have never stuck to a certain kind of film. I just write about any genre or topic that interests me. Needless to mention, all these don’t get made into films. Many of them just get stuck at the script level. So that’s what I tell a lot of writers – you can’t approach writing in this way “I have written one script and I am waiting to make a film out of it”. You have to keep on writing as much as you can. The process itself will lead to a lot of stories.

Don’t you get an overwhelming urge to see your stories become finished products?

A. Absolutely, you are right. That’s the intent, always, specially for a screenplay writer. The intent is to finally get the story upon the screen. But reality has to be dealt with – specially in the arts. This is a serious combination of commerce and art, where the commerce dictates the art. There are a lot of stories that will find no takers. So they fall by the way side. It’s part and parcel of being a writer anywhere. You must pick yourself up and write another story.

So where did Dhanak came from?

A. Dhanak actually is a story idea that a friend mentioned in one line for an ad film years ago. And that one line: a boy and a girl living in a small village and the sister was trying to get the brother’s eyesight. So this was for an ad. I just loved the idea and it stayed at the back of my brain. About a year and a half later, I saw this lovely image of a boy and a girl walking in the dessert. The girl was holding the boy’s hand, walking alone. That image just spurred the memory of this idea, and that’s when I decided to make a film out of it. 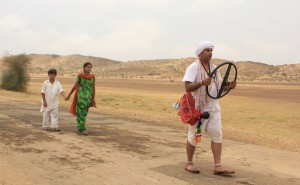 You’ve shot a lot in Rajasthan over your career.

A. Most of India has become featureless. One city blends into the other; it’s the same haphazard picture with no real value. Given that there are very few places that have their charm intact, Rajasthan is one of those places that has hung on dearly to its glorious past. So it’s one of the truly beautiful places to shoot at. For me, the desert has that extremely dramatic feel about it and somehow, for me, isolating the characters against the periphery seems to be very exciting. So yes, I constantly keep on going back to that imagery.

How was your experience working with kids?

A. It was a very very harsh shoot. Rajasthani deserts can get very hot. But these kids, without any choo-chaa, just kept working and working, and we worked some long hours. I can take credit for casting good actors but I can never take credit them for turning out to be good human beings. That is just my good fortune. They were tremendous. It was one of the most enjoyable processes.

Your films are quite well balanced in terms of emotions…

A. It is basically a reflection of how I view the world. Every director brings his/her sensibility to the table. For me, the drama is there, but it is always muted or balanced. Plus melodrama is something that I don’t relate to, so, essentially, it’s a personal choice. It is based on the ground rule that nothing in the film happens by accident. Everything is designed and everything is pre-thought. So, my films reflect my sensibilities.

You have acted in few of your films too. And not just cameos. Have you ever thought about pursuing acting full-time?

A. The irony is that I studied acting for three years, but I never studied direction. I have a much longer training as an actor, but having said that, direction is something that I enjoy more. I step out to contribute if necessary, and during those days, I have enjoyed it, but that’s not my number one priority. Never has been.

And when others offer you a role in their film?

A. I have been approached many times in the past. Most of the times, I haven’t liked the script. And mostly, there is no script there – just the outline of the character. I have never actively said yes, but I have been approached and yes – if someone approaches me with a good solid role, and if I think that I can do it correctly, then why not?

Any advice for aspiring directors?

A. The first thing is to recognise that there is no right or wrong. All of art is just a choice that you make. So if you believe strongly enough in your own voice, then stick with that vision. Don’t allow 50 people to give their opinions because there will be 50 different opinions, and you will end up making a faluda of your film. Have strong conviction about the story you want to tell, and then be strong enough to face the consequences because it’s not necessary that it will lead to success. If you make a crappy film, then own up to it.