Actress Konkona Sen Sharma has been around. She has challenged convention, and reached a stage in her acting career where simply her name in a film guarantees a certain “kind” of cinema, and raises expectations.

However, this is a different innings. She is now a director — her first feature-length film, a thriller called A Death In The Gunj, premiered at the Toronto International Film Festival (TIFF ’16) this year to favourable reviews. Here is our review from its world premiere.
A simple one-liner: An undercurrent-heavy Indian family get together soon turns into a tragedy.

It has now come home, as the opening film of the prestigious 18th Mumbai Film Festival.

SNEHITA KOTHARI has a quick chat with her, as she gears up for the Indian premiere:

How did you come to direct A Death in the Gunj?

It’s a story that I was familiar with — a story that I had heard as a kid from my dad. And it’s just that at one point of time, it fascinated me so much that I developed the idea further, and eventually I had the whole structure ready. So I came to it very naturally and organically; it’s not like I had planned to do this film.

Please elaborate a little about your writing process.

My grandparents used to live in McCluskieganj in the 70s. My parents would visit them often. They would go on road trips with family and friends. There were many stories born out of those trips — some fun stories, some not-so-fun ones. This particular story is more of the latter, with a certain circularity to it, an eeriness about it. In fact, my dad later wrote a 3-pager short story on it as well. I didn’t start writing until I knew every single thing in my head. I knew my characters and what was going to happen to them. In my script, I have even described the shots I wanted visually. I wanted to present the story in a way that captivates people. So I wrote the first draft and sent it to the (NFDC script) lab. They helped me polish and tighten the script, and also helped me weed out unnecessary stuff. It was a very important process, to spend some time on and with it. We ultimately shot the seventh draft of the script. 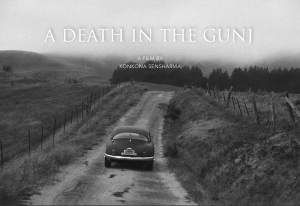 Nervous for the Indian opening?

Do you plan to direct more in future?

Let’s see. I hope I find an idea inspiring enough, because you need something that sustains your attention and passion over a period of time. If I come across, or think of, anything like that, I will direct. Why not?

Any challenges you faced during the shoot?

Time and money. It’s a cliche, but it’s true. It always is, when people make films. There’s much more to the process than simply executing your vision. Lack of money means lack of time. And lack of time — you know. We shot in 31 days, so it was like a raging war against time!

‘A Death In The Gunj’ will open this year’s Mumbai Film Festival on October 21st, 8 pm, at Regal cinemas (Colaba). Delegates can book their tickets here.