FTII graduate Gurvinder Singh has been in the news lately for his Punjabi film Chauthi Koot, one of two Indian films selected at Cannes 2015. His first feature film was the National award-winning Anhey Ghorey Da Daan (2011); a bitter pill to swallow, but a necessary one, writes Aniruddha Guha 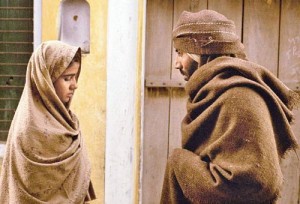 A scene in Anhey Ghorey Da Daan shows a group of villagers huddled around a family that is mourning the razing of its home. It’s a misty winter morning. Everyone is draped in either a shawl or a sweater. Standing among them is an old man, impassively taking in the scene around him. Later, the owner of the demolished house gets into an argument with the authorities. They whisk him away. The old man watches all this with deadpan eyes.
Large parts of the Punjabi film show the old man and his family going about their lives. This is interspersed with repeated shots of textile mills in the village’s vicinity. There is little happening in terms of story, but it all leads to something.

Gurvinder Singh’s debut film, which won him the Best Director National award (2012), presents a cold, bleak picture of life in a Punjab village, a far cry from the mustard-field-spotted and boisterous Punjab we are used to watching in Yash Chopra’s films. Anhey Ghorey Da Daan is made up of long, sweeping shots of the rural countryside, with minimal dialogue and a slow-moving plot. Singh takes time establishing context, letting you take in the film’s surroundings at a leisurely pace — the creation of mood gets precedence over storytelling.

Filmmaker Mani Kaul, who made such offbeat and celebrated films as Uski Roti and Ashadh Ka Ek Din, is credited as the film’s creative producer; Singh considers Kaul to be his guru in filmmaking and had asked him to mentor the project while it was still at a development stage with NFDC, the film’s producer.
Not surprisingly then, Singh’s work mirrors Kaul’s style, even if the themes are different.

The film isn’t easy to watch.
A large part of the runtime does not contribute to the central plot per se, but every scene is integral to the world Singh wants us to be in. The camera once follows the old man and shows him walking from one part of the village to another. In another scene, the camera pans to a window and stays on the view outside for a couple of minutes; you hear the sound of a train approaching and then see it pass in front of the window.
The film is made up of such frames, captured painstakingly by first-time cinematographer Satya Nagpaul, who too won a National award for his effort.

The inhabitants of the village shown in the film are mostly old, implicating the migration of the village’s younger crowd, with the older citizens left to fend for themselves. As a contrast, Singh then takes us to Bathinda.
The old man’s son Melu is toiling to earn a living in the city, far away from friends and family, lonely and lost. He rides a cycle-rickshaw through the day, with no reprieve or motivation. Displacement is the common factor — Melu’s father’s fear of it, and Melu’s difficulty to grapple with it.

The film ends on an unexpected note. The time and patience devoted to the nearly-two-hour film pays off. But the investment required is daunting.
Anhey Ghorey Da Daan, which means ‘alms for a dying horse’, is more in the mould of the art-house genre favoured by filmmakers like Kaul in the ’80s, which found a limited audience. The theme dealt with by Singh isn’t new — displacement and the urban-rural divide was a staple tool used by filmmakers in the ’50s and ’60s. However, lately, rural issues are rarely addressed in our films even though the very problems persist.
What makes this film relevant is that Singh is dealing with contemporary issues, those which go unnoticed by a large part of the country nestled in the metros. And it makes for compelling viewing.

Singh’s handling of the subject is commendable. His cast is made up from regular people in villages, not actors. While that does lead to some inconsistent performances, Singh might otherwise not have been able to capture pain and pathos quite as successfully as he does.
The story is adapted from Gurdial Singh’s novel of the same name (he came on board to write the film’s screenplay too), and Singh’s decision to start his filmmaking career with this subject is praiseworthy.

Of course, Anhey Ghorey Da Daan is an unlikely film to be put out for mass consumption. Those who venture in might be left wondering if there really is need to take as long as Singh does to make his point, and without the need to infuse some ‘entertainment’ in the story.
The film may not be everybody’s cup of tea.
But it exists. Just like the problems it talks about.

Aniruddha Guha (@aniguha) is a film critic and journalist, formerly of DNA and Time Out Mumbai. His video reviews can be seen at Dedh Minute Review.