Keeda for All Seasons

We have a quick chat with Amit Masurkar, director of last year’s homegrown indie ‘Sulemani Keeda‘. 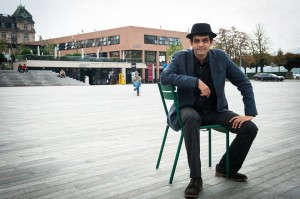 Your Keeda is done and dusted. Do people now look at you primarily as “that cool indie director”?

A. I don’t know what people actually think of me!

Neither do I, actually. You will at some point graduate budget-wise and scale-wise. Ironically, it were these physical constraints that made Sulemani Keeda look very authentic. Will you be able to handle a sudden abundance of resources?

A. The budget of Sulemani Keeda was so little that anything I do next will appear big! Sulemani Keeda was a 3- 3.5 Cr film made in 1/10th the budget. This is because people worked for free or for very little. We didn’t spend on locations, hair and make up, vanity vans, generators, lights, grips. We were a passionate cast and crew with a good story to tell. I had a very clever producer in Chaitanya Hegde, who managed everything very smoothly. Whether the budget is less or more, everything depends on the story and the team.

How was your time writing for mainstream TV and Bollywood? It seems you gained a lot of perspective out of it…and perhaps learned what not to do?

A. Television is an easier world to break into. My first real job was writing sketch and standup on ‘The Great Indian Comedy Show’. It was the coolest show to work on in 2004, and we were studying acts such as ‘Monty Python’, ‘Kids in the Hall’ and ‘Upright Citizens’ Brigade’. I have done some very bad TV as well, but that afforded me the luxury to take long breaks and work on my film scripts. I also got to hone my directorial and editing skills, thanks to the episodic work that I shot for Channel V, and the various corporate films I produced. So, in a way, everything you do teaches you the do’s and the don’ts!

There’s a very laid back air about you – like you feel at peace after finally making your film. Is too much importance attached to releasing a film, rather than actually concentrating on making the best possible film? So many get sucked in to the long process and stop bothering about the outcome…

A. As a filmmaker, you are never exposed to the distribution side; this was a new terrain for me. I was just enjoying learning the economics of the trade, understanding new terminologies and helping out in all ways possible with the release. Four people are responsible for the release and the buzz that was created during the release of Sulemani Keeda – Sailesh Dave (and his team) who spearheaded it, Shiladitya Bora of PVR Director’s Rare who not only fought for good show timings, but also gave us a lot of free advertising space in the theaters. Arunabh Kumar (of TVF), who promoted and released the film online, and Mauli Singh, our publicist who worked very hard to get the right people to watch and write about the film. So I was lucky.

You worked with two fine experienced actors in Tannishtha Chatterjee and Pankaj Tripathi for your short film “L” for Terribly Tiny Talkies.

A. While I had met Tannishtha socially and knew her from her body of work, I first noticed Pankaj in Gangs of Wasseypur and loved his performance in it.  ‘L’ was written with the purpose to work with them. On the set, I didn’t have to do much. They are both very spontaneous and their chemistry is evident on screen.

Are there any Indian filmmakers that inspire you or influence your work?

A. I filmed Dibakar Banerjee and his team when they were making ‘LSD’ and observed his process closely. I used some of his workshop techniques with actors on Sulemani Keeda. So that’s a direct influence. Also, I enjoy the company of Kamal Swaroop, whose film, Om-Dar-Ba-Dar, has been an inspiration to a whole generation of filmmakers. Indian films from the 70s that I love are ‘Arvind Desai Ki Ajeeb Dastaan’, ‘Garam Hawa’, ’27 Down’. I love the black and white films of Raj Kapoor.

How difficult is it to be a young screenwriter in Bollywood and try to get an original script picked up by a good director? Every production house keeps saying they’re looking for scripts…

A. Production houses are always looking for scripts, but the people there who are your first filter are not talented enough to judge a good script from a bad one. Also, most writers don’t polish their drafts and send half-baked concepts to producers, and thus lend a bad name to the entire community. While my original scripts never got made, I was lucky to collaborate with some good directors very early in my career. I’m grateful that Shashanka Ghosh (whom I cold-called) signed me as a writer when I had no prior experience. I then co-wrote scripts for Shoojit Sircar, Aditya Bhattacharya and Sekhar Kammula. I also wrote a couple of other spec scripts which I would shop around. However none of these films got made. But it taught me a lot.

Networking seems to be a large part of your work. When you go to pubs, casual events or parties, do you always have an agenda?

A. It depends. There are networking events like NFDC Film Bazaar which have benefitted filmmakers like me immensely. But at casual parties, most people are there to unwind and relax. The kind of film people I am friendly with have other interests too, and so the conversation is rarely about work.

What do you think of the current independent scene here?

A. It all depends on how ‘independent’ is defined. Internationally, independent films are defined as films which are produced outside the studio system. In India, most films are made by independent producers. The filmmakers whom we define as “Indie” are all making films with studios. Unfortunately, films which don’t have lip sync songs seem to be categorised as “Indies”. However, with films like Court, Labour of Love, Aankhon Dekhi and producer-financiers like Manish Mundra, Navalakha-Kajaria and Sohum Shah, the Mumbai independent scene will thrive.

What are your views on the current film criticism scene here?

A. It’s a mix of good and bad. While I have met and interacted with some brilliant minds who are in the criticism business, there are others who see writing film reviews as a way to fast-track their career in Bollywood as filmmakers, or even to settle petty scores.