Film Critic Rahul Desai looks back on a brave film that raised the bar for non-fiction storytelling in India.

A LESSON TO REMEMBER

Nisha Pahuja’s 2014 documentary “The World Before Her” juxtaposes two universes that are, at first glance, as cosmetically apart as possible.

The film begins with the unsettling male gaze. This is not so much due to nosy film cameras in their midst; their eyes are instead fixed upon a pretty young girl walking down a crowded Jaipur street. They don’t exactly mind this invasion of space.
The girl is unaffected and contemplative.

She doesn’t quite fit into this rustic setting; she knows it, and portrays a put-on sense of indifference. She’s pretty, or at least she hopes she is. 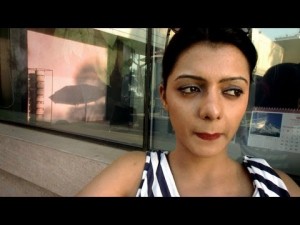 Ruhi Singh, 19, is about to participate in a month-long beauty boot camp at a Suburban Mumbai hotel, as preparation for the annual Miss India pageant. For her, this is the ultimate curtain-call of independence.

This is her destiny, and also perhaps the shortest cut to the big, glitzy world of Bollywood.

Not too far away in Aurangabad, we join another type of annual camp. This too is for impressionable young girls, who aren’t quite sure of their calling yet. Their views are shaped by the houses they’re brought up in; these aren’t quite homes, but breeding grounds of radical ideologies and boredom. 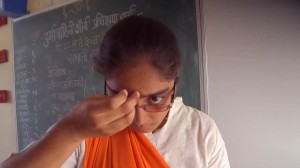 Prachi Trivedi, 22, is the youth leader of the Durga Vahini—the women’s wing of the militant fundamentalist group Vishwa Hindu Parishad.

She is refreshingly ‘bindaas’ and straight-talking despite her roots, and immediately endears with her unapologetic views on womanhood.

In between teaching her to hate Christians, Muslims and the ‘evils of Westernization’, her father wants her to get married. Prachi doesn’t argue because she is thankful that he “let her live” at birth.

Not many girls in her region are so fortunate.

She knows this, and isn’t fussing about the fact that she needs to be beaten physically at times, to be reminded of where she belongs. After all, she doesn’t want to end up like one of those superficial girls at their shallow pageants. Her father abhors everything they stand for, and therefore Prachi (sort of) detests it too.

Later, they discuss the essence of true Hindu women, domestication and motherhood, eyes transfixed on the final moments of Ruhi’s pageant on the TV screen.
Prachi, for a moment, is seen admiring the young lithe bodies that stand before her on screen. Before she gets caught in this moment of weakness, she notices that her father is doing the same.
They nod their heads absent-mindedly, before Prachi’s mother slips in a comment about the winner’s dress.

The filmmaker presents these paradoxical moments in perfect rhythm, without judgment or scrutiny, raising subtle questions without attempting to answer them for us.

No silly voiceovers and shabby verbal exposition; just an expert construction of real sequences across three regions, with characters who are not quite as self-aware as they believe themselves to be. For everyone, including Ruhi’s proud parents, this is a perfectly normal world they function in. If you tell them otherwise, they will change the topic.
The picture these images paint is far from vague.

In fact, Miss Pahuja’s audacious documentary had me exasperated for a different reason: Typing down my observations forced me to shift my attention away from the screen for a few seconds.
There is not a moment in this film that is redundant or unimportant.
Even when the voices, dreams and faces on screen momentarily dim, an incredible sense of craft takes over. There isn’t a transition out of place, or a filler shot unnecessary; each sequence leads to its metaphorical equivalent in the corresponding parallel world.

There are numerous such examples of perceptive filmmaking: the sight of a lone Muslim man at his shop while Prachi leads her slogan-chanting extremist army, the strategic presence of a Chetan Bhagat novel next to Nehru’s biography on Ruhi’s shelf, her parents unable to locate her face in a glossy photo-shoot cover (“they look same”), ex-Miss India Pooja Chopra’s brave mother and her poignant story on domestic violence, and Prachi’s rather pure perspective on terrorism (“Only bombs”).

More importantly, Miss Pahuja and her team construct an engaging and thought-provoking snapshot of time.
Its victory lies in an unerring ability to make us uncomfortable, and almost laugh at the sheer insolence of their worlds before us.

Even if stripped off its social and cultural relevance, this is a genuinely entertaining account of two absorbing personalities in environments that supposedly define them. There are highs and lows, minor victories and colossal disappointments, beginnings and ends, irrespective of their places on a larger moral scale.

A traditional drawback of documentaries is the transformative power a camera has on its subjects.
Here, this is not a weakness; Ruhi’s facade works well within the context of the bootcamp, and Prachi’s brainwashing is a big part of her existence. If they pose for the cameras, it is because they are trained to. This is an intrinsic part of them.
The purpose is defeated if the characters become self-aware while filming, and this invariably affects their integrity. It is in the viewers’ awareness and education that their stories must find a resolution.

That this film prompted Ruhi, now 23, to gasp upon watching herself and exclaim, “What an incredible woman!” during a festival screening is perhaps Nisha Pahuja’s greatest achievement as a documentary maker.

I thoroughly recommend “The World Before Her”— easily one of the finest films of 2014, documentary or otherwise.
The drama lies somewhere between seemingly unconnected stories, much of which is felt while these very real people go about formative phases of their lives; lives that are unique only because they exist and thrive among us.

All you need to do is, observe.

(This film was made in 2012, and has won numerous awards on the festival circuit before entering India for a successful theatrical run in 2014)