The Circus of Cinema

It is rightly said that films record human history. As time passes, the changes in society are visible in the films as well. For some time, I have been thinking about how certain professions are not seen anymore in our movies, just like it happens in real life. Characters of postmen in films were quite common earlier but we no longer see them. Instead, these days WhatsApp and Twitter find a place in the lyrics of songs. Likewise, circuses were wildly popular in the earlier decades. However, as new modes of entertainment come in, circuses lost their charm. I thought to document the instances in Hindi cinema where circuses have made an appearance.

One of the earliest appearances of a circus in Hindi films is in S.S. Vasan’s Chandralekha (1948). The film tells the story of two brothers named Veer Singh (M.K. Radha) and Shashank (Ranjan), who are fighting with each other over their father’s kingdom and for marrying the village dancer Chandralekha (T. R. Rajakumari). Shashank’s aides imprison Veer Singh in a cave and seal its entrance with a boulder. Chandralekha rescues him with the help of elephants from a passing circus troupe. Later, Veer Singh and Chandralekha join the circus to hide from Shashank’s men. However, they are found out by spies when Chandralekha performs at the circus after which they run away again. The film was originally made in Tamil but was later remade in Hindi with a few changes. It was considered to be the most expensive film made in India at the time. 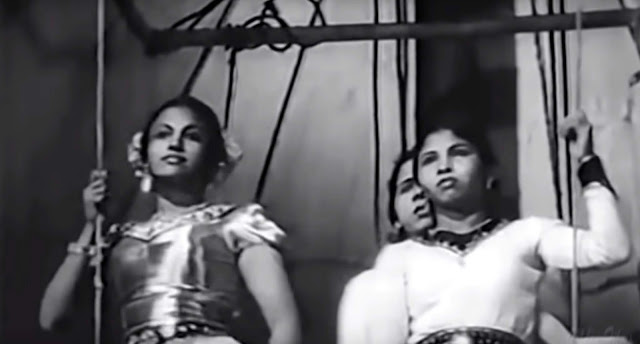 The circus was also an important part of the film Circus Queen (1959). It starred Fearless Nadia along with the action hero of the time John Cawas. Directed by Noshir Engineer, the story of the film is based in a circus called The Great Punjab Circus. A five-year-old child enters the lion’s cage and Usha Devi, the star performer of the circus famous globally as Circus Queen, rescues the child. Later, it is found that the lost child is the son of a wealthy father and is also a part of a kidnapping plot. Usha Devi and Detective Kishore save the child and help him return to his family. 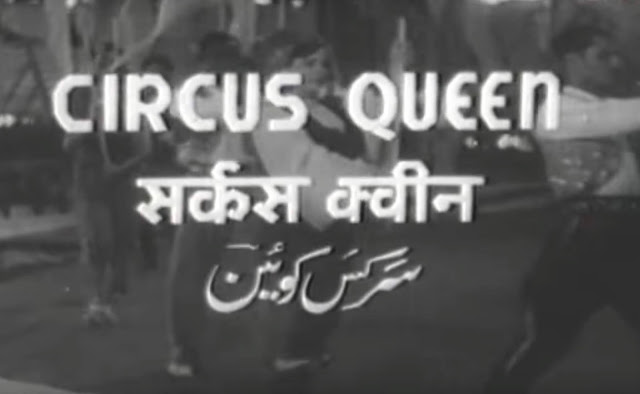 In K. Mishra’s Yeh Dil Kisko Doon (1963), Shashi Kapoor plays Raja, a rich man, who leaves his home and roams the town as an aawara man. He meets and falls in love with a girl Sherry (Ragini) who works at a circus. With Sherry’s help, Raja finds work at the same circus. Murder In Circus (1971), directed by A. Salam, is also based at a circus where a string of mysterious murders is taking place. The murders revolve around a stolen case of diamonds, with many possible suspects. Jaymala plays the star trapeze artist and shares her name with the character. She solves the crimes with the help of Gopal (Sujit Kumar), the lion-tamer and fill-in trapeze man at the circus. The film’s plot was inspired by the Anglo-German international co-production thriller Circus of Fear (1966). 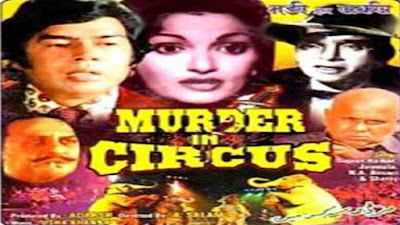 Perhaps, the most popular movie that comes to mind when thinking about a circus in Hindi films is Raj Kapoor’s Mera Naam Joker (1970). The film traces the story of Raju (Raj Kapoor), a circus clown who works at Gemini Circus, from his childhood days to his final act as a performer. Raju’s father died during a trapeze performance which made his mother averse to anything related to the circus. However, as fate would have it, Raju follows the footsteps of his father and he becomes a clown. In his final act, the three women whom Raju fell in love with at different stages of life, come to see his performance at the circus. The film’s underlying philosophy is similar to Shakespeare’s All The World’s A Stage. The film was a critical and a commercial failure that led to a financial crisis for Raj Kapoor who had mortgaged his family assets to release the film. However, over the years, it has slowly gained acceptance from the audience and is now considered to be a cult classic. 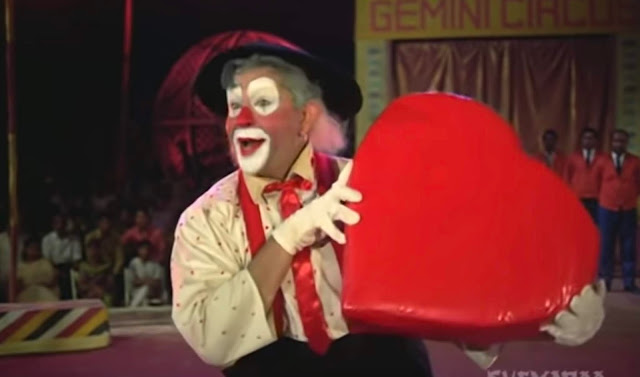 In Ashok Roy’s Kalabaaz (1977), Vijay (Dev Anand) and Radha (Zeenat Aman) play trapeze artists in a circus called Rayman Circusthat is managed by Radha’s father G. D. Sapru (Pradeep Kumar). During a risky act called shadow jump with no safety net, Vijay is unable to catch hold of Radha who falls down to the grown and suffers serious wounds on her face. After a surgery, her face is disfigured. Disillusioned by the events, Radha leaves Vijay and moves abroad. The film takes a turn in the second half where it becomes more of an adventure story where Vijay travels to the mountains to retrieve the stolen idols of Radha and Krishna that were of huge importance to Radha.

In Chandra Barot’s Don (1978), the character of Jasjit (Pran) plays a tightrope walker at a circus who was forced to conduct a robbery at the instructions of Don’s henchman Narang (Kamal Kapoor). In Ramesh Sippy’s Shaan (1980), Rakesh (Shatrughan Sinha) was a shooter at a circus who used to shoot targets blindfolded which led to Shakaal asking him to assassinate Shiv Kumar (Sunil Dutt). In Appu Raja (1990), Kamal Haasan plays a dwarf named Appu who grows up in the circus with his mother and falls in love with the daughter (Rupini) of the circus owner (T. S. B. K. Moulee).

The circus plays a pivotal role in Rakesh Roshan’s Krrish (2006), the sequel to Koi… Mil Gaya (2003), which narrates the story of Krishna (Hrithik Roshan), a man who has inherited superpowers from his parents. He is the son of Rohit (Hrithik Roshan) and Nisha (Preity Zinta), the leading characters of the previous film. Krishna falls in love with Priya (Priyanka Chopra) and follows her to Singapore. A friend invites him to the Great Bombay Circus, where a fire breaks out. Many children are trapped in the blaze. Krishna wears a black mask and rescues the children. It was at the circus where Krishna becomes Krrish, the superhero. The film also has a circus song Dil Na Diya that shows many colorful antics.

Neeraj Vora’s Phir Hera Pheri (2006) is about three men, Raju (Akshay Kumar), Shyam (Sunil Shetty), and Baburao Ganapathrao Apte (Paresh Rawal). The film tells the story of the shenanigans of these three men who have to return the money of the gangsters that they borrowed after they are duped in a financial investment scheme. The film ends in a circus called The Great Royal Circus where the three of them dress up as jokers to save themselves from the gang members and end up performing some trapeze acts. The film’s story is inspired by Guy Ritchie’s Lock, Stock and Two Smoking Barrels (1998); however, the plot of the circus was adapted from Charlie Chaplin’s The Circus (1928). 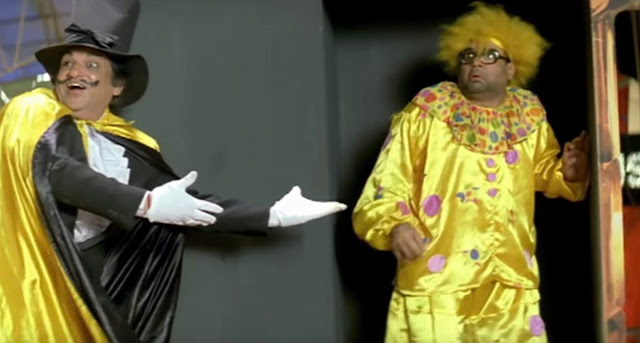 Zoya Akhtar’s remarkably insightful Luck By Chance (2009) is the story of two struggling actors trying to get a break in the Hindi film industry. In the film, Armaan Kapoor (Hrithik Roshan), the current top-ranked star of the industry, shoots the song Baware with Nikki Walia (Isha Sharvani) in a circus-setting for Romi Rolly’s Dil Ki Aag. After Armaan gets an opportunity to work for another producer, he leaves the film and Vikram (Farhan Akhtar) gets a chance to fill in his shoes. He reshoots the song Baware and Dil Ki Aag goes on to become a big hit. The song Baware is quite colorful and fully utilizes the skills of Hrithik Roshan and Isha Sharvani who are known to be terrific dancers. Baware was shot at an actual circus called Rambo Circus, whose website mentions other films, such as Mujhse Dosti Karoge, that have been shot there.

Vijay Krishna Acharya showed a contemporary circus in Dhoom 3 (2013), the third installment of the Dhoom franchise. The film opens in 1990 at a circus called The Great Indian Circus that performed in Chicago. The circus is run by Iqbal Haroon Khan (Jackie Shroff) who is struggling to keep it afloat due to financial difficulties. The circus is shut down by the bankers who are not convinced even when Iqbal shows his most spectacular act—The Boy in a Box—in which his son gets inside a box and comes out from a different place. The circus is shut down and Iqbal commits suicide. Years later, his son Sahir (Aamir Khan) restarts the circus and performs the same trick of his father that was inspired by Christopher Nolan’s The Prestige (2006). The film also has a song Malang in a circus setting with many aerial acts performed by Aamir Khan and Katrina Kaif and is considered to be the most expensive song ever shot in the Hindi film industry.

There have been reports that Ali Abbas Zafar’s next film Bharat, starring Salman Khan, is going to have some daredevil sequences and a grand song based in a circus. All the three Khans—Aamir, Salman, and Shah Rukh—have a circus connection as well. Remember, Shah Rukh Khan in his early days starred in Aziz Mirza’s television series called Circus. 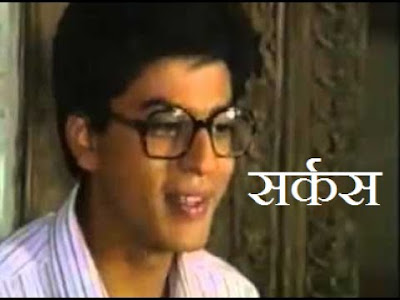 Colombian figurative artist and sculptor Fernando Botero once said, “The circus allows one to be logical and unreal at the same time. In the circus, all is possible, there can be a man with two heads or a character with a green face.” The same can be said for our films as well, after all, films and circuses have a special relationship as they share the same underlying purpose of entertaining and engaging with the audience.
[To read more of the author’s work, log onto his blog here]
By IIF|2020-04-28T08:48:20+00:00December 15th, 2018|Analysis, movies we loved|0 Comments