The unbridled chaos of a crime thriller and the twisted beauty of gore are captured perfectly in the album’s first song, Qatl-e-aam. Although I still cannot figure out why the voice of Sona needed processing, the overall vibe of the song is deliberately sinister, and those menacing synths only elevate this aura.

The unplugged version of this song is understandably calmer, and you can chew on the lyrics – those with an element of murderous tease – a bit more. Also missing in the unplugged version are those spooky vocals of Yash Divecha. What is however not absent is the playful guitar by Pawan, that relaxes the overall setting.

Behooda is a dark song done up beautifully. The lyricist explores the gore of ‘phaphoond, nakhoonon se phoda chhala, zeher ki naali etc.’ and Ram Sampath takes the help of simple beat pattern so that we can hear these words clearly. At one point, I wanted to shout out to no one in particular – I GET IT, HE IS A BAD GUY, STOP IT ALREADY!

Siddhartha Basrur excels in Paani ka raasta. It is not a happy song, but then I wish it was a bit longer. After setting the premise so beautifully, the song hits the peak fairly quickly. The star of the song for me is Shon Pinto’s guitar; it adds so much to the song in terms of setting the reflective mood just right in the beginning, before going all complex by the end.

Raghav theme is peppy and has a trance-like grip. When it plays out, don’t be surprised if you find yourself bareling down a long smoky corridor with flickering lights and an overall dimness, indulged in a chase where you forget if you are ‘the chaser’ or ‘the chased’. That is the role of a soundtrack, after all: evoking elaborate visions and imagery in context of the film and atmosphere it belongs to. That one can imagine this before even watching the film yet is quite a testament to its role as, both, a storytelling device and an individual entity. Additionally, those sarangi samples are reminiscent of the (underrated) soundtrack of ‘Let’s Talk’. A fantastic theme piece that soars and how!

In Bollywood, or more specifically, the Hindi film industry, it’s quite fashionable to attach the tag of ‘dark’ to your subject and then ignore the music completely. This album, right through, tells us how to approach music — in treatment, tone and arrangement — for such subjects. It is disturbing, chaotic, fearless and has an undeniable air of confidence.

VERDICT
Pick this one up if you would like to get a sexy peek into the feral world of Raman Raghav 2.0, without really seeing it at all.

For embracing the actual feel of the film, puncturing it at the right spot and spraying devious pus all over my speakers (pardon the metaphors, but all is fair in love and music), Ram Sampath and Raman Raghav 2.0 get a big thumbs up!
* You can listen to the full album HERE. 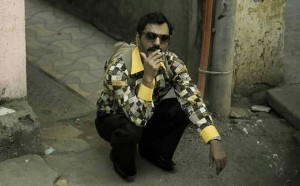 ALL LYRICS by: – Varun Grover

RECORDED and EDITED at OMGROWN STUDIOS by: – Yash Divecha and Nitesh Bisht

MIXED at OMGROWN STUDIOS by: – Yash Divecha and Nitesh Bisht