IIF was recently invited to partake in a small round-table discussion with “The Reluctant Fundamentalist” Director Mira Nair and cast members Riz Ahmed, Kate Hudson and Kiefer Sutherland. IIF as well as a few other writers and outlets discussed everything from South Asian culture to perception in this day and age. Here are a few highlights from the conversation with Mira Nair. IIF’s question is highlighted in green while the regular bold questions are from other members of the press. 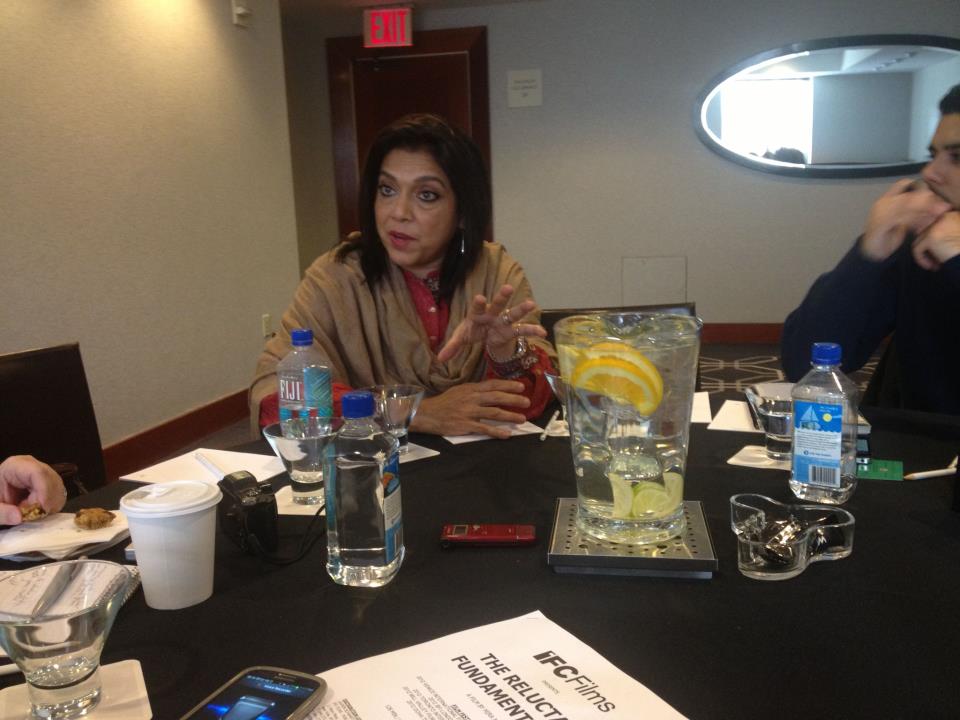 IIF: There is a relationship in this movie, I’ve noticed, with the artistic and the creative. Changez’s father was a poet and he falls in love with an artist. And I’ve noticed, especially with out culture of South Asians, sometimes I feel like our parents might not foster that growth of being an artist. So can you talk a little bit about that relationship in this film?

Nair: Good question, because of course like any community, there are many kinds of us. Like my father would tell me, “Just sit for the Indian Foreign Service Exam. Reject it if you don’t want to be a diplomat but just sit for it. And I would say that I have absolutely no interest in being a diplomat. But I understand, it’s just that desire of something palpable that you’ll never have to risk. But of course, being an artist is to be full of risk. You love risk. But I tell you the people I love most are the older generation of artists like Faiz Ahmed Faiz. And so Changez’s father, played by Om Puri in the film, is so much from that ilk where really the word mattered much more than the dollar. And I love that generation and it’s such a great thing to be able to bring that person to life because I actually think that there is no greater healing in the world and no greater inspiration in the world than to interpret the world through art.

IIF: You could sense the tension when he is kind of seen as destroying the work of the publisher in Istanbul and that was his father’s work. You could just see it there. That was great.

Nair: And this family [is] unlike the cliche where you’ve got to go abroad and make your fortune young man and come back and bring ourselves back to the higher class where we used to be. We don’t need this. They’ve never asked him to go away. In fact, his father is the one who asks, “What do you really do?” He demystifies and he reminds his son, very beautifully really, to ask him the core question. Who are you serving in life and what are you doing? By one stroke of your pen creating unemployment for many of the faces that you will never see. Ask yourself. It’s very interesting because it’s not what you expect. Life is much stranger than fiction. Life will tell you that this person exists. That this is what happens.

Should we get the most obvious question out of the way then about the timing of your film coming out with everything that’s going on [in Boston] at the moment? How do you feel about that?

Nair: Boston is where I went to school and it’s very very tragic to add Boston to the list of cities that have experienced terror. But it’s also a terrible reminder brought to our local eyes of the suffering that is global and that happens everyday in other parts of the world of which we don’t see. So it’s humbling in that respect.

It’s also one of the reason why I made my film because we so often do not see the consequences of our reaction on people. You know? Post 9-11, the same thing. The quickness to racially profile. The quickness to hold a whole community responsible for what could have been a bunch of individuals. The unfairness of that and more than that. [It’s] the repercussions of that. Because I haven’t seen in the last 12 years, any glimmer of peace. I’ve actually seen a one-sided conversation. A monologue when what we desperately need is a dialogue.

And this film, that’s why I made it. It’s a way to see beyond who is always shown as the other and to show it in a way that is like life is. That it’s complicated. It’s not just good guys, bad guys, us and them. Which is how it’s often shown. If it’s shown at all. If the other side is shown at all. So I really think it’s a sadly timely film. But it will always be a timely film unless we pause to understand the human being on the other side or those that we affect with our actions.

I’m wondering for Changez’s character, the idea of assimilation seems to be something that’s very negatively charged. You’re someone who’s spent a significant amount of your life in New York. Is there such a thing as healthy assimilation?

Nair: Of course there is. Of course there is. And for Changez, it’s not only negatively charged. I mean he is in love with a dream and he achieves the dream in a very deep way. He’s actually in love with this country. He’s in love with a person who is American. And he’s hugely lauded. That’s the best of America, what Jim Cross does to make him a junior partner before anyone else. Post 9-11. A Muslim boy with a beard. Wrong name. Wrong time. But it doesn’t matter because the guy has merit and the guy has a brain that can yield profit and do what they need him to do. Which is also my America.

But you know, I came to America with this vision. I was asked to speak at the White House last year at the National Medal for the Arts. And they were in the audience, the medal artists, from Robert Brustein to Sonny Rollins to Meryl Streep to James Taylor. So many people, Joyce Taylor and Phillip Roth. And these were the visionaries who brought me to America. This was the land where art reigned and when you spoke of America you came for that vision. Today you ask America or mention the name in other parts of the world and a young child is more apt to draw a Kalashnikov and that is terrible. And that is what I spoke about.

The America I came to is here in front of me but we have to ask ourselves what has it become. For instance, you asked about lessons. Racial profiling is an immediate lesson. Just last week a LaGuardia Airport, which was unbelievable, I won’t get into it. And so, I question this overt response. I want more understanding. I want more dialogue. I want for us to know each other in our complexities. Not as good and bad. Not as reductive categories of black and white.

Because the great beauty of this country is, I mean look at this table, there are people from everywhere who are American. And America has prided itself on not looking like one person. And so if we start making these divisions in this way or prism of seeing, which we are. Because we are in our policies, we certainly are in our films and the media. You know we never hear from the other side.

Mira I have a question about how you’ve really arrived at the point you are. I mean about childhood and about your dad. I believe he had an Indo-Pakistan friendship society. The scars of the partition must have been there with your family. So how have you arrived at the point where you think this way?

Well my father grew up in Lahore. Meaning he was educated there. He went to college and law school there. But he came from the other side. He came from Punjab in India. He returned there before the partition and he joined the administrative service, the IAS, which in Nehru’s time, which was the first counter of Indians to run what the British had run before in our country. And the first thing that Nehru did to promote a secular India was to take the North Indians and move them to East India. We were posted to Orissa, which is this remote state in the East where I was born.

But I grew up speaking kind of Urdu, Hindustani, and knowing this music and the language and so on. So when I went to Pakistan years later, when I was 47, you know it was like going home in a “deep-ish” way, which I never expected. And I never saw it like Moshin [Hamid, author of novel The Reluctant Fundamentalist] says, I’m an Indian director making a Pakistani film and I appreciate that. But for me, there was never a border. And I really didn’t feel it. Otherwise I would be daunted and paralyzed. But I kind of in my bones feel it is one.

But anyway, I guess living in multiple worlds as I do and yet feeling very rooted, being a fierce Desi in my soul, I understand that I’ve always taken courage in being distinct. [I’ve] taken courage in knowing and remembering where I come from but being totally open to the world. And I wanted to bring that sensibility and the way I see to the screen. Because I think in this day and age and the polarities of our world and how we see each other, we need that. I hope to be speaking to many, about this.