IIF was recently invited to partake in a small round-table discussion with “The Reluctant Fundamentalist” Director Mira Nair and cast members Riz Ahmed, Kate Hudson and Kiefer Sutherland. IIF as well as a few other writers and outlets discussed everything from South Asian culture to perception in this day and age. Here are a few highlights from the conversation with Kiefer Sutherland, Riz Ahmed and Kate Hudson. IIF’s questions are highlighted in green while the regular bold questions are from the other members of the press. 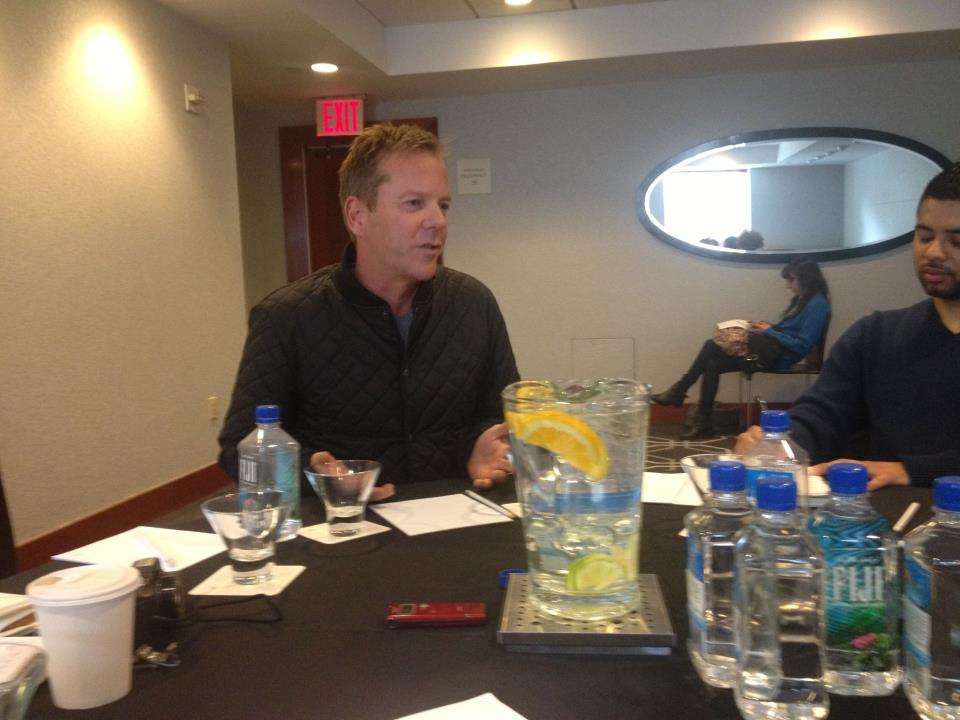 What’s it like working with Mira as a director. What’s different about her?

Sutherland: She’s the mom you’ve always wanted. Someone asked me what was it like working from the feminist point of view. Her point of view is actually very asexual. She’s got a point of view period. It’s not feminine or masculine. But her nature on the set is very motherly. She creates an environment for you to try things. Doesn’t mean that she won’t crack the whip to get the day done. But there’s a real nurturing quality to her that I don’t normally run into and I mean I love her to death.

Can you give an example of cracking the whip?

Sutherland: Yeah. We had a 15-hour day in New Delhi and it was a great line. “Enough is Enough!” And this was her crew there so they knew what that meant.

You know in the film, your character seems to see a lot of parallels between Changez and himself even though he doesn’t come out and express it. What do you think struck a chord with Jim about Changez?

Sutherland: He saw an opportunity. My character is an opportunist and he’ll nurture you and he’ll take care of you as long as you feed him. And when you don’t feed him, he’ll cut you lose and you’re dead. And it’s exactly what he does in the movie. He saw an opportunity. The manipulation is we have all this in common. The reality is you’re gonna help me and I’m gonna take you for everything that you got.

IIF: Do you think the moment, I think it was a great scene in the movie where Changez finally decides not to do it and you’re yelling at him right there in the lobby in front of the elevator, and do you think your character was upset the opportunity was gone now?

Sutherland: It was a mirror. If you’re chasing the American dream full throttle like Jim is and then your protégé says I don’t need it. There’s a dynamic power shift. He can’t handle that.

In the press room they talked about how 9/11  really impacted you as a father. How you had a different perspective.

Sutherland: There’s not a day that goes by where I don’t think about it. I don’t have a computer so I can’t speak to the internet but I have friends who have gone on, half-drunk, late at night and looked up something that they wish they hadn’t.  And they see something that really throttles them. It was 5:45 in the morning and I was on my way to work at “24” and I got a call saying I don’t know if we’re going to work today. Turn on the news. So I flipped on the TV and the first tower had been hit and the second one had not. And then literally five minutes later, the second tower had been hit. And like everybody else, I was mesmerized; I just sat there watching, waiting to find out if I had to go work. And I watched these two people; you know how you make stuff up in your head. I had decided, for whatever reason, that these two people didn’t even know each other. They shared an office for a year and half and here all of sudden, they’re standing at a window and they made a choice to hold each other’s hands and jump. And I think about that. My life would be very different had I never seen that and it was for real. I called my ex-wife and asked if she was watching this. She was crying. We had probably the nicest conversation of our entire marriage and we weren’t married. And it brought my whole family really closer together. Nothing was to be taken for granted after that. And I think everybody felt like that. When you hear the stories about New York and how it changed this city and it’s had a profound, very lasting effect. So yeah, I think about it all the time.

So in the movie, how did that impact you?

Sutherland: Well it’s not so much in the movie; it’s when I read the script. My focus had always been clearly on those two people first and then imagining the suffering and the fear of all the other people in the towers, then the people on the planes and their families and their great losses. I didn’t spend much time thinking about the ripple effect that people of a different faith, i.e.: Muslim, that people of a different color [that] their lives were massively impacted. And I was kind of embarrassed that I hadn’t thought about that. I consider myself relatively progressive and I think I was so angry after 9/11, like many people, that the better part of me probably didn’t surface right away. So when I read the script I was profoundly impacted by that. 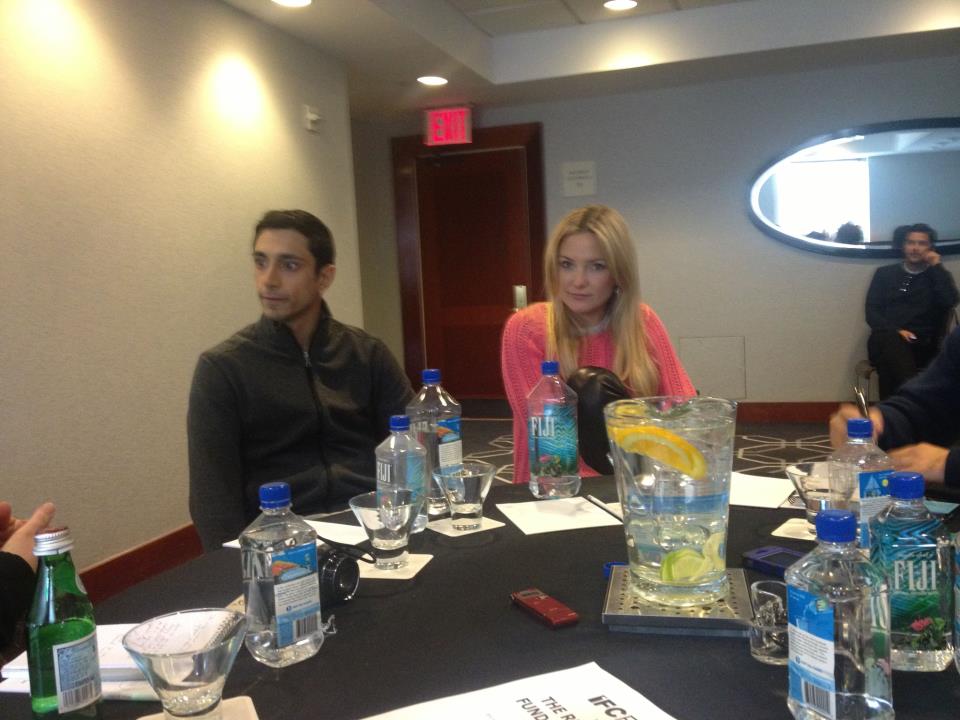 Kate you said that taking on this role was a no-brainer. Could you tell us why?

Hudson: Well Mira. I mean for me, I met with Mira and I was very pregnant. I was like 8 months pregnant. I knew that I wasn’t going to be able to do the movie because I was pregnant. Mira somehow had no idea that I was pregnant and walked in and was really excited to talk about the movie. She walks in and says “You’re so pregnant! You can’t do this movie.” And I said, “I know I thought you knew that. I just wanted to talk to you. It’s such an interesting script.”

So we talked about the story and we fell in love with each other. She felt very familial to me. I don’t know if its cause my mother’s been going to India since the 70’s and I’m surrounded by so many of my mother’s Indian friends that I just felt like it was meeting, you know, a soul mate. And I just felt like if it wasn’t this that whatever she would want me to do I would be there to do with her. And fortunately, they pushed and we were able to do it. I just had Bing [my baby] and I showed up and more than just Mira, when I read it I had to read it two times in a row because there was just so much material. It was so rich in its themes and I really wanted to know how Mira was going to tackle it. It felt like a really brave project.

When I heard her talk about using these themes and this sort of political thriller backdrop as a way to tell a story about a young man’s journey in finding himself and human connection and the human spirit and where do you find it? How do you get to that place in your life where you’re being authentic to yourself? I just thought that only Mira could tell this story and so I’m happy I was able to be a part of it.

Ahmed: Well I think the important thing in the film for the characters is that they don’t go into or at least they don’t consciously go into it looking at each other as a collection of labels. They don’t think OK, white, Upper East Side, from money and she doesn’t think Pakistani, Muslim or whatever. I think what emerges down the line is that maybe there is a hint of exoticism in the attraction. And the extent to which that is healthy just to investigate what is previously unknown to you and to the extent to which it is actually objectifying. Like turning someone into this like fashion accessory or something. I think there is that tension in this relationship but I don’t think that’s one that’s common to all interracial relationships. I think the kind of prevalence of interracial relationships is one of the beautiful things about modern cosmopolitan societies and I think there are many that are like totally healthy and just grow and blossom.