That Feeling Of Pina

The first would actually mean that the film is alright, and can’t really be watched more than once. It has served it’s purpose, and this phrase is commonly used worldwide in order to brush aside all further analysis.

The second perception is carefully poignant — much like the ‘experience’ I will soon describe, or attempt to, at the very least. Here, when I say that a film is a bloody good ‘one-time watch’, it means that, of course, the film should not be watched more than once. But why, if it’s so good?
My answer: You will NEVER experience that feeling again, even if you watch it 10 times over. That sheer joy, that moment when you gather that you are truly part of a mesmerized audience, part of a once-in-a-lifetime second (or hour or two)…you won’t ever feel that again. Savour it, because that tingling, untamed, hair-raising excitement will stay with you long after you’ve watched the film.
Why, again? Because you’ve watched it only once. It is pure. It will remain with you, unless you commit a mortal sin and watch it once again. Hence, according to me, no beautiful film can be watched more than once. The moment has passed. The flavours have been devoured. Memories are ripe. And let them remain just that — memories. Memories of that experience. Because, face it, you’re never going to make love for the first time again.

On that note, I will now begin a…I can’t call it a review, really, or even an opinion…
In 2011 at a film festival, I fought my way into a jam-packed screening of German documentary-film ‘Pina 3D’: a savagely personal tribute by famed visual crusader Wim Wenders to a widely-known avant-garde choreographer of our time, Pina Bausch. Now, to be honest, I have never been aware of this particular famous artist, to an extent that I didn’t even know if it was a man or a woman the first time I came across the splendidly-constructed trailer. And, much to my relief, this tribute was not one-dimensional and not targeted at loyal fans or die-hard dancers. If anything, I felt like this film was wondrously assembled by Wenders…specifically for me.
Also, I was thankful for the fact that, by the end, I knew Pina Bausch none the better as an individual, or as the fiercely passionate soul that she was. All I knew was that she immersed her entire other-worldly dance troupe (later to be known as ‘Tanztheater’) into every single crease of a dangerously intense form art form that she had created and then mastered, with unparalleled passion and precision alike, over the years. I don’t want to know more. I don’t need to, really. 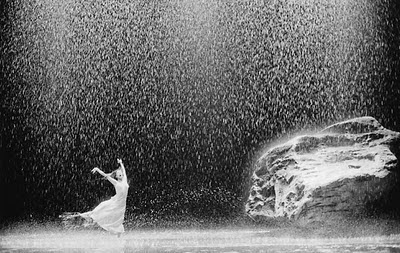 Before I go on, I must bring to your notice that the word ‘art’ has been used ever so often lately, and abused, too.
But has anyone stopped to wonder what the definition of that word actually is?
If not, it doesn’t matter. You don’t need to know it in words, really; all you need to do is experience a certain sort of submissive feeling while watching a performance, a feeling that need not be described for the want of keeping it silent and extremely intimate. A feeling that makes you want to jump with joy and weep like an infant at the same time. A feeling that you know, for a fact, that is as rare as an IQ-challenging blockbuster. If you watch an old beggar run across a signal like a hare, it is art. If you watch a dog mourn the death of a master, it is art. If you watch a baby jump on one leg, it is art. If you watch a good M. Night Shyamalan film ever again, it is art. You see, there is NO thin line between minor miracles and art.

Similarly, if you watch a serene performance-artist (not a dancer as much, mind you) abruptly break rhythm and jump through a hand-created vertical hoop…it is ART, in it’s purest form possible.

Because you’re never going to feel that sigh, that sudden stunned exhalation of breath at that exact moment, ever again. You will never be touched by that memory in its freshest and most virginal form again.
No, I did not digress: I am still talking about Pina, the experience. More importantly, I’m sure that most of us, at some point everyday, feel an urge to do something unusual, you know, to give into instinct and emotion. In our more frustrated moments, we daydream about doing something that we’d rather be doing, subject to mood swings and quality of days at hand.

I, for example, often think of playing tennis and hitting the sweetest crunchiest crosscourt backhand ever. I want to feel the sheer cleanness and timing and brilliance of the shot, and I want to experience it once again. Earlier, I’d think about running and hopping, bird-like, across car tops when I was stuck in traffic…or even swimming right into the ocean during a stormy, dangerous evening. These feelings defy logic, emotion, or any sense of practicality or order ever programmed into us. It is the power of the mind winning over the brain — and a careless, carefree almost-reckless urge to immediately dispose off that particular instinct- overcomes us.
It could sometimes be something as routine as twisting your face into weird expressions or even as suicidal as standing at that very edge of the terrace and test your pole-vaulting skills, or even grinding your teeth irritatingly until you’ve had enough. Whatever it is, you feel the inexplicable animalistic urge to not only test, but push yourself to your very defined limit or even beyond. A moment like that occurs every single day, for as long as you live.
So what do we do? We restrain ourselves. We reason with ourselves. We forget about it, as a sleight-of-hand trick by our bored brain. In short, we just let it go. We don’t go with it.

Now, the only difference between us and the hundreds of artists (dancers, ballerinas, performance-artists, expressionists) that have been clearly touched by Pina’s form, is that this single woman has managed to channel these spectacularly illogical moments into something ever rarer: a performance. Into a spectacle that soothes your eyes just enough to leave you wanting for more. Into a form that resembles four different art forms, riddled with imperfection, ugliness and beauty.

That urge, very squarely, has been converted into an expression that oozes longing, energy, sadness, madness, impulsiveness, obsessiveness, love, lust, caution, recklessness and pure submissiveness.
Art is recreated to an extent, and what follows is a scenario where the artists don’t display to us their unique skills as much as nature presents to us it’s ultimate disguise: the human body. 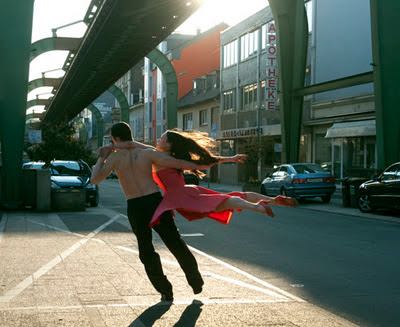 Performance, it seems, is nothing but an extension of nature- and life is but a million instinctive moments put together. Because instinct, impulse and dogged desperation- in them, too, is an art of forgotten times gone by. When Pina conjured up in her mind, not-astounding images of ordinary dancers anti-dancing in the midst of nature, little did we know that the simplest of images could turn into something so venomously teasing, so enormously seductive- so much so that we’d want to instruct those ‘artists’ ourselves, and do things with them ourselves. Energy is utilized in the most non-creative manner possible, presenting to onlookers the most artful oxymoron that ever existed…because there is always a degree of ugliness in beauty, and vice-versa.

So, instead of letting that pent-up nervous energy build up in them till they reach a point where they start daydreaming about tennis rackets and skateboards, all they do is…move. They move till it is chaotic, and till there is a certain order (created by Pina, herself) in that chaos. They do things that are most unconventional, in the most unusual setups possible, all the while scrutinized closely by a judgmental world bereft of any sense of desperation or passion. The boldness that accompanies their actions and the serene nature of the world around them, is the base on which their brittle stage takes form.

All this while, for every such performance, a live audience is a must — with every single ounce of tackiness and  beauty lying in the simple dimensions of the space that they consume. The space and the area, are most important, with every dimension playing an equally crucial part as the ‘dirty’ dancers. A simple 2D film camera, whether shoved up the wooden planks on stage or at every nook and corner of the 30 feet high ceiling, will NEVER do justice to the visuals meant to be displayed on screen.

What Wenders has done here, with shockingly significant success, is present 3D to us not as a tool to improve the depth of the images on screen, but merely as an ordinary process that helps us place ourselves bang in between the piercing gaze of our desperately beautiful protagonists. The distance between the two men in the foreground and the tragically pathetic figure of a lonely woman rolling in dirt in the background is just as important as the very concept of hitting us with an image so provokingly devoid of convention. It is the space between them that matters, it is the illusion of the difference in body-lengths that adds that much-needed humanization to such a physically-demanding and relentless form.
The 3D doesn’t look fancy here, and doesn’t pretend to either — all it does is add one more dimension when needed, and brings their stage to us. Simple, unglamorous and perfectly in tone with the chaos unfolding before our bewildered eyes. Detractors and fence-sitters of 3D alike, sit up and take notice- for you will never find a gentler, more appropriate bastardization of technology in any of those machine-creature-orgy blockbuster movies. If you still insist on trivial issues like loss of light and image quality in a live performance, there is nothing and nobody that can convince you otherwise.

Pina, could, maybe, if she were alive, and if she told you exactly what she kept telling her faithful, emotion-stricken dancers: “Keep searching…keep searching till you don’t find it…,” with this timeless phrase much evident from her superbly incomplete nature of work.

As far as recommending an experience as desperately calm as this goes, all I can really say is: Either you feel it, or you don’t.