Every now and then, after a drink or two, my mother begins to drop the distinctly upper-class ultra-urban endearment ‘babes’ – one I’ve never quite understood, not least because of its grammatically incorrect connotations – into her phone conversations.
I snigger at her. “Stop using that fraudulent term. It doesn’t suit you at all”, I tell her, rather condescendingly. And then, as is the way of most fickle, cynical 20-something writers, I go on to make sweeping generalisations, “People who use ‘babes’ and ‘bro’ don’t have a genuine bone in their body. They crave social acceptance and feel the need to fill the void in their lives by bastardising languages”, I rant to her, reminding her that she is already a cool, liberal mom who doesn’t need to resort to such witless neon-signed banter.
Later, I realise that the friends she talks to are also incessant users of the term. And many more.

In a way, it’s the same kind of inferiority complex that compels most Indian travellers to ape the accents of foreign lands they visit. Or like me, a guy who picks up the quirks and tones of the people I’m closest to. It’s not only because we think our grasp over the language isn’t good enough; it’s also a momentary window we create, to escape our own dreary existence. Or at least, an existence we think is dreary and ‘routine’, and not quite exciting or experimental enough. These are the few times in a week we get to be someone we’re not – or perhaps convince ourselves, through the wistful lens of melancholy and age, that it’s what we were meant to be.

Since happiness is almost always equated to status and wealth in today’s India, it’ll always be the middle class that wants to be, or ape, the upper classes, and never the other way around. It’s the image of richness – which is often represented by stranger faces with expensive cars, jewellery and foreign holidays – rather than the concept of richness itself that is strived for. That’s the essence of human psychology – the grass always seems greener on the other side. Whether it is or not is irrelevant, once we finish the conversation and cut the call.
So when my mother goes into ‘babes’ mode, I realise that she’s gone back in time for a while – feeling part of a class she had once frequented with gusto. She had quite enjoyed the promise of money, and being the giver for a change. Her gait, aura and spirit had considerably changed. Invariably, she reminisces about the days when she’d go out with these friends to 5-star lunches. Like Nayantara (Konkana) in Jaydeep Sarkar’s intricately detailed short film, she loves the distinct aroma of these hotels – one that oozes capitalism under the garb of comfort and poshness. In a sense, it promises a bigger – and not necessarily better – life. Unlike Nayantara, she doesn’t drag the term ‘babes’ in a drawl; hers is a more clipped, I-slipped-it-in-there-casually tone. And more notably, unlike Nayantara, she admits to ‘missing’ that life, instead of pretending to still be living it. She knows it’s gone, and perhaps forever trapped in her memories. For those few moments, the babes and darlings and sweeties will flow, lest she feel like those glorious phases were dreams. Many like her, who had once seen money before being yanked out of the life due to factors beyond their control (mostly, their husband’s control), still insist on being in that zone. It’s not so much denial as it is a hapless wish to regain control of the life they had once envisioned. 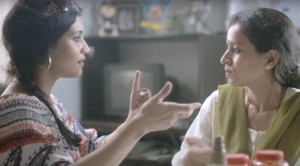 Which is why, when Alka (Tillotama Shome) gleefully learns about life and Chardonnay from the regal-sounding Nayantara (Konkana), I see a bit of my mother in both of them.
Alka is the middle-class housewife whose days are restricted to discipline, routines and chores. Life never happened to her while she was busy making other plans. The filmmakers reveal shots of her flat – an extension of the personality she has had to adopt. A fluttering calendar on the wall, the whistling cooker, crumbling wall paint, an old desktop computer, a murky fish tank (which is perhaps the most adventurous part of the house)…it’s no coincidence that Nayantara coaches her only in the confines of these surroundings.
My mother absorbs – and wishes – with the giggly fascination of Alka; she’s made her peace with being this woman. There’s the frustration and restlessness of boredom, which automatically points her to a physically larger (way of) life. But she also invokes her inner Nayantara while gossiping with the household help. And this is what the filmmakers set out to convey in 20 minutes: it’s easy to mistake one’s own lack of satisfaction as a sign of inferiority, there by positioning anything different on a pedestal.

One line of thinking suggests that Nayantara, unlike Alka, wants glimpses of the life she may end up living, very soon. She isn’t fascinated like her friend; she’s afraid, and seems to be treating it like practice – like she’s sizing up the more unfortunate way of living. She wants to get a taste of this environment, one that she isn’t quite prepared for. More often than not, these interactions are studded with rhetorics; both questions and answers seem to be part of a conversation Nayantara is having with herself. In hindsight, it’s clear that she begins to use her own persuasive powers on herself, to hear what she wants to, by using Alka as the wide-eyed medium. She lavishly drops in hints of her lifestyle to the one person completely ignorant about it.

Another line of thinking suggests that perhaps Nayantara craves for what Alka has – nothing. No pressures, no excitement, low expectations, no experiences, and not an ounce of pretension. No need for the mask she puts up every morning. The filmmakers also suggest, through flashes of vintage tea sets, ill-fitting glares and Japanese hand fans, that maybe it was the life she once lived, and promised never to revisit. While domineering playfully over her new neighbour Alka, she finds herself torn between these two worlds. Only, we don’t know which one she’s reluctant to revisit, and which one she’s desperate to depart. Perhaps, even she doesn’t know. Hers is a classic case of humans forever looking to escape their own miseries by projecting their wisdom on others. Konkana lends her character an eagerness and need to be heard – one that comes hand-in-hand with the knowledge of being ‘that’ couple. The ones that insist on being everybody’s eternal sweethearts and sounding boards. The ones that find solace in others’ interpretations about them, if only to escape the closing walls of their own bedrooms.

Konkana excels in this awareness of different kinds of vulnerability, and an ability to enact a persona that is already a result of playacting. It has to be said too, that Tillotama Shome – in this writer’s opinion, one of the finest living actresses in India – has this unique power of being able to look as if she can see herself from a director’s chair, as well as the cinematographer’s lens. As Alka, she is hypnotic in her simplicity; the way she innocently reacts to music, technology, tales and even a street-seller from the confines of a car; she paints an entire portrait of her life without having the filmmakers spell it out for us. Eventually, when she finally puts to practice her eloquence and makeover lessons, the resemblance is uncanny, and almost disturbing after taking into consideration what is to follow. 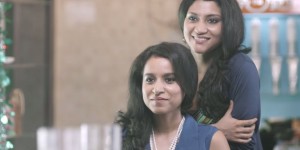 Together, they make Nayantara’s Necklace a resounding triumph in acting. Their command over the craft is absolute, and one that automatically results in an amplified attention to details, blocking, cutting, spaces, design and framing – which, in turn, makes their story a well-made film, instead of just a character-driven commentary on society. What’s even better is that they perhaps don’t realise how good they are, and this reflects in their character’s insecurities. I suspect they arrive at a set every day wondering about how to start again, become better and prove themselves more with each project.
Filmmakers like Sarkar will evolve faster than most others, if they continue to choose and work with such high-calibre artists. And the art of short filmmaking, which is being generously restored by various avenues like this one, Terribly Tiny Talkies and Humaramovies, will find its resurrection as it should: as an equal-faced alternative, and not just a stepping stone, to feature-length movies.

Thanks to them, the next time, I may just smile – and not mock – my mother’s post-8PM barrage of strange endearments. Because, in many ways, I’ve understood her better.