Talvar: An Inescapable Act Of Faith

‘Talvar’, directed by Meghna Gulzar and written by Vishal Bhardwaj, haunts like no other Indian film in recent times. It is not so much a film as it is an elaborate, methodical and frank deconstruction of justice. To expect to case to be reopened on basis of a strong, well-crafted film is a bit much, but it does make many Indians – most of us overzealous voyeuristic followers of a sordid saga we really knew nothing about – question their sensationalist, media-fuelled ideas about crime and corruption.

It revolves around the famous 2008 Noida Double Murder case, in which 14-year old Aarushi Talwar and the household help 45-year old Hemraj Banjade were found dead at the Talwar residence. Until Hemraj’s body was found a day later on the terrace, he was suspected to be the killer. Then, the blame automatically shifted onto the mother and father – Rajesh and Nupur Talwar – the only two people in the house, other than the victims, present that night. Many of us, including the impulsive lower middle-class UP cops that had first arrived on the scene, had pronounced the Talwars guilty simply because they looked quiet, and their angle suited our debauched interpretations of Delhi and its criminals: impulsive daughter-killers who perhaps stumbled upon the victims in a compromising position. We obviously didn’t go further into it, as to why Hemraj was killed on the terrace instead of in the room, and how empty beer bottles in his room suggested the presence of three other male servants in the house.
In our minds, we pronounced the parents guilty, because it was Noida, and because they didn’t fight these accusations. We conveniently overlooked the fact that their bodies were probably numb with grief at the brutal murder of their little girl, and that they had no strength to even bother fighting such ludicrous theories. They may have expected the storm to quieten down once the real culprits were nailed, but unbeknownst to them, the authorities – everyone from the bungling cops, the forensic teams, the CBI hierarchy, lawyers, judges and state heads – were playing their own game of nailing the donkey. It’s understandable that many of us took a blind shot in the dark, aided by the media and newspapers, aided by our preconceived prejudices and egos – because we’re citizens, who know no better. We will go where the news takes us. It is unfortunate that the news played a tug-of-war battle with us, but we didn’t mind. We’re all inherently conspiracy theorists, and it’s everyone’s secret fantasy to play real-life detective with lives that were none of our business. It’s not our job to protect other citizens.

But the people in charge of protecting us – and ensuring that justice is served in a balanced and competent manner (at least based on evidence or lack of it) – shockingly reacted just like we did. They let their instincts and pride guide them, and threw the rulebooks and procedures out of the window, subject to which news channel they watched at night, or subject to which boss they worked under. There’s a reason they’ve been put in charge of maintaining law and order; they’re trained, and the first thing they’re taught is to never get swayed by vague accusations and media stories. But time was ticking, and they couldn’t find what they were looking for. So, they became like us. Only, they were perhaps the only people on Earth who couldn’t afford to become like us. Instead of telling us why it doesn’t make sense to jump to conclusions, they jumped to their own – and shot the dying birds. Various class divides were exposed as they gave the three prime accused a clean chit, and put the blame on the parents again. 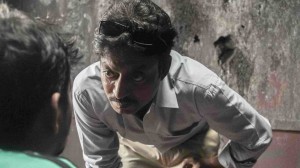 Now, as filmmakers, Bhardwaj and Miss Gulzar are absolutely in their right to show us these amateur mistakes, and to show us that, at times, the people in charge of our nation are weak enough to represent the sentiments of the nation instead of defining them. They dug up dirt on the Talwars, which isn’t difficult to do on anybody in this day and age, given that none of us are saints, and none of us are perfect. Connecting extramarital affairs to crimes of passion, and connecting old unsettled scores to a schoolgirl’s life; it all seemed uncomfortable even when we were convinced that the parents were guilty – even when we, like blind hypnotic mice led by the pied pipers of this country, were led into a dark, diabolical leap of faith. But it provided pieces to an unfinished puzzle, even though the pieces were blunt, had no edges at all, and were perhaps not even part of the same puzzle.

The mind boggles if one is to watch authorities act on deadlines and conjure up theories simply because they have to, and simply because they can’t solve a tough case; the enigmatic disappearance of the Malaysian Airlines MH-370 airplane had also initially compelled authorities to sound like they’re on a witch-hunt, but they reigned themselves in and practiced restraint, because there were hundreds of mourning devastated families that had to be respected. That’s human instinct, which the Noida authorities seem to have forsaken at the alter of incompetence. Many investigators of the plane incident did jump to conclusions too, with many unofficial theories and wild speculations – but none of them were declared as the ‘solitary’ reason. These were initial knee-jerk emotionally invested reactions – books were written and shows made about various conspiracies of governments behind this disappearance. There will always be people like that, but imagine if the official teams had pinned the blame on one of the country’s governments, or on the sleeping pilots, because at the time it may have seemed most convenient, and perhaps the easiest theory to sell. That’s not how it’s done. People simply can’t be disgraced without an ounce of evidence, least of all people that are somehow involved in some capacity with an unfortunate, eye-popping tragedy. Even if they’re caught with their pants down with a knife in their hands, it doesn’t necessarily mean they’re the killers; there could be some outlandish theory behind that too, but not the kind of easy, straightforward storyline that we prefer to dissect.

It’s not easy to construct a fictional representation of real events. Anything that raises questions without answers, and raises doubts without agenda, is treated as blasphemous and a direct attack on humanity.
But this film is perhaps the closest to how things actually unfolded – physically, visually and even in context of emotional continuity of the nation’s sentiments. You feel it, because it shows you everything the way you imagined it to be, except that it tells you these things from every angle possible. It then leaves you to decide – which is a farce of sorts, because it’d then be a educational documentary. The reason ‘Talvar’ has jolted us is because it is a restrained, elegant argument in favour of the parents. It doesn’t beat its chest and blare drums; facts are presented, while the performers let pre-conceived notions about their faces, gazes and reputations do the rest. 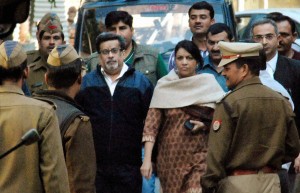 Usually, when one sees an impactful terrific film, one feels like celebrating it. But this can’t be celebrated; this film is so powerful that it makes us hang our heads in shame as we exit cinema halls. It depresses us, and makes us never want to re-visit and wreck our consciences again. Moreover, it’s an angry film – and not in the conventional sense of rage and anger, but in the passive-aggressive, mind-screwing sense – arguably far more adult representations of this emotion. It’s another matter that it might make us want to beat up many known faces in Delhi. This isn’t something new, but for once, we’ll be an informed bunch of blood-thirsty ranters – something that, thankfully, the filmmakers aren’t.