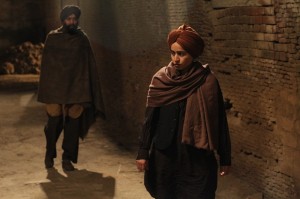 Independence came at a cost. A concrete hierarchal chain of bitterness exists, even today, in partition-affected families, led by old patriarchal heads that bore the brunt of being uprooted from generational homes. The psychological scars cut the deepest, repercussions of which are still felt decades later.
Qissa, directed by Anup Singh, gives a disturbing face to one such aftermath.

This Punjabi film doesn’t venture into the actual partition; it stops short of showing Sikh Umber Singh’s (Irrfan) struggle in relocating his young family to Indian Punjab. Like many other patriarchal heads forced to uproot their families, he becomes a distracted, pensive-looking man burdened with authority. We’re left to contemplate his ordeal, as he begins to construct a chilling, dysfunctional future for them. All through, he resents his own inability to have a son; we don’t know of his unhappiness until he looks, or refuses to look, at his three daughters.
They are of little significance to him, as is his wife (Tisca Chopra; remarkable), who has become little more than a device to procreate. Her voice, though muffled and frustrated with her delusional husband, remains within those four walls- or sometimes, three.
His fourth daughter is named Kanwar Singh (Shome), and is brought up as a son by him. Things spiral out of control when Kanwar’s identity crisis is compounded further by forced marriage to a naïve gypsy girl (Dugal). Instrumented by Kanwar, this move obviously isn’t thought through.

Anup Singh goes where few Indian filmmakers have gone before, forcing us to dive face-first into an uncomfortable 20-year tale of social, moral and ethnic disintegration.
We see, with full and abstract force, with authenticity and lifelessness, a gradual descent into madness and self-destruction.

There is a bizarre tilt to the metaphysical in the final act, a portion that is meant to make no sense in order to make sense. This indulgence is unfortunate; Mr. Singh gets carried away in his quest to unsettle us, but his accomplished group of actors almost justifies the strain.
Tillotama Shome stuns in an androgynous avatar, and along with an utterly radiant Rasika Dugal, gives an intuitive performance that will stand the test of time. Their chemistry is far more complex and believable than most mainstream heterosexual on-screen jodis. And then there’s the formidable Irrfan Khan. When his 12 year-old ‘son’ informs him about her first period, his eyes oscillate between dread, realisation and utter delusion. That very moment, the enormity of what he has done seems to have hit him. He visibly struggles to accept evolution; the man actually manages to evoke sympathy for his mental condition.

Singh’s frugal use of a brooding score, limited to a creepy one-note crescendo, makes for the mood of an existential horror film. You know doom is just around the corner. An exact sense of lighting, combined with minimal production design, contributes to this tone. Transitions are executed without slates, instead recognised by the evolving face of young Kanwar. Shome ages mostly through her mannerisms, which is quite something, given that we’re supposed to forget that she is a girl.

On the writing front, it must have been tempting to let her identity remain a secret, or to let her shocked wife melodramatically discover the truth naturally on their wedding night. But this is a story that isn’t satisfied with sleight-of-hand tricks. As soon as Umber Singh holds his fourth child, it becomes clear that the director isn’t out to so much as narrate a story as to trap us in its stifling silence. And he does, like rarely before, until he is trapped by an urge to over-philosophise grief into a rather aimless finale.

That the two girls elope with each other, determined to carve their own destiny in a society yet to define its moral conflicts, is in itself quite the impulsive route. Their love is born out of desperation, out of an urge to break free from the lie forced upon them, and out of an instinct to perhaps conform to domesticity and ‘normality’. Their secret only adds to their naive excitement in a forbidden-fruit manner.

Qissa bears a sinking stigmatic framework similar to Pakistani filmmaker Shoaib Mansoor’s groundbreaking ‘BOL’—perhaps the highest compliment a social drama can be accorded these days.
Be a strong viewer. Acknowledge this brave film.

(Qissa was completed in 2013, and released in India in February 2015 after a successful festival run)