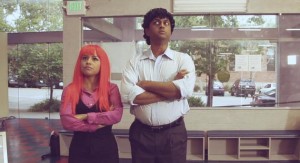 It’s difficult to be brutal about how below-average most Indian independent films are, what with blind passion driven by an obvious lack of budget and resources.
However, there’s a drive associated with independent filmmakers that’s hard to understand; they don’t give up, and work for years without light in sight, even if their project isn’t panning out too well. In such cases, existential protagonists and artistic verve is used as an excuse to cover up out-of-focus shots and bad sound.

Therefore when I heard about this small movie shot by a guerrilla crew of three across two continents; a film that forsakes mainstream distribution in favour of a worldwide pay-per-view online release (April 2nd); and worryingly, a director (Sandeep Mohan, ‘Love Wrinkle-Free’) who has held informal ‘traveling cinema’ screenings across cafes, colleges, offices and houses—I could be forgiven for being a wee bit skeptical.

Surprisingly, and thankfully, Hola Venky, Sandeep Mohan’s little labour of unconditional love, is a breezy rom-com that not once reminds you that you’re watching a financially compromised effort.
I suspect that the final product is exactly what the filmmaker hoped it would be. Or perhaps even better; which is why I don’t need to use constrained ‘ifs’ and ‘buts’ while judging his work.

Over the years, Desi crossover films have been of two kinds: One involves an NRI returning and struggling to absorb ancestral Indian-ness, the second documents coming-of-age misadventures of a sturdy Brahmin chap on his first trip abroad. Both make for mildly entertaining fluffy little novels, the kind more and more NRI authors have created in order to get ‘closer to their roots’. And earn some money.
When translated to screen, much is lost to formula and bad casting.

Tonally reminiscent of Anurag Mathur’s cult novel ‘The Inscrutable Americans’, this film invokes the second kind. In a good way.
Tamilian divorcee Venky (Narayan), a frustrated coder by profession, travels to San Francisco on a career-boosting leadership program. What happens in SanFran must stay in SanFran; an unmentionable night out results in him hiring an attractive Mexican sleuth (Balcazar; enigmatic) to find a randy Chinese girl who stole part of his manhood, quite literally.
His obsession with his ‘instrument’, even prior to this event, is a bit unnerving, especially because he is already a divorcee who has come of age sexually. This trait is something you’d associate with an ambitious virgin, a nerdy teenager or a man suffering through his tenth mid-life crisis. Venky, in spirit, is probably a bit of all three.

As with most comedies resulting from drunken debauchery, much of the plot is outlandish, but Mohan introduces a bunch of believable supporting characters.
Quirk is the name of the game, but none of them try hard to be quirky; Venky’s school gang and their obscene banter are relatable, and his eventual fascination with Mariachi music is not unnatural. After all, cultural similarities between Indians and native Indians don’t stop at spicy food and immigration issues.
Mohan’s treatment of low-budget camerawork and lapel-mic sound is visceral, notably Venky’s psychedelic ‘coded’ dreams fuelled by his fondness for marijuana (yes, existential, I know, but it works for once)

The end of Venky’s story is a bit rushed, and though it lacks a happily-ever-after punch, his graph is quite logical.
Sonia Balcazar’s is an enigmatic character, what with the coloured wig and lack of detective-client ethics. But she’s sincere, and just about carries a crucial emotional-hook scene in her car, where she’s supposed to convey much of her backstory just by listening to and enjoying a particular Mariachi piece on radio. The filmmaker’s selection of this nostalgic theme is another important element. Cinematography wise, the natural-light technique has its burnout moments, the only moments where the whole home-video feeling takes over. But Venky is the kind of guy who looks the part of many grainy home videos; at least that’s what the director has designed him to be like.

Eventually, it is Roger Narayan’s take on this bumbling Indian export that makes the 88-minute film worth your time; he makes sure that he looks—for lack of an appropriate term—screwed. He makes you feel for him in a ‘bechaara’ way, if not with his silly lines, then with his perpetually pained face.

It is perhaps a blessing in perverse disguise that complexities of the Central Board of Film Certification are turning young filmmakers away. This leaves them no choice but to think of other innovative avenues. Who’d want to go through administrative hell, only to have viewers endure anti-smoking ads and variations of a national anthem before a perpetual ‘Smoking Kills’ sign ruins his/her vision?
Is the future of ‘online’ here yet? Only time will tell. The freewheeling avenues Sandeep Mohan has explored here certainly provides some food for thought.

Hola Venky may sound iffy at first, and there’s nothing extraordinary about it. But it is precisely this ordinariness and blithe style that makes it a lazy Sunday afternoon watch. Put away Mathew McConaughey’s old dated rom-coms; this one’s far more relatable.

(This film is now available for FREE VIEWING on Youtube) 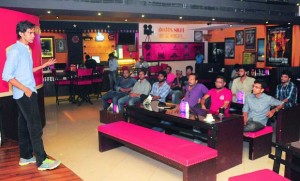