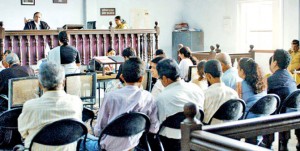 By the end of Court, it’s hard to tell if the case being argued is about a victim or a criminal; such is the apathy of a judiciary that thrives on prose and pointlessness.
Chaitanya Tamhane, 25 when he made Court, could have chosen to make a propagandist Michael Moore-style documentary on the Indian judicial system, complete with pointed voiceovers, hidden cameras and hardened criminal interviews. It’s difficult to be subtle about the functionality of a system with players that thrive on public scrutiny, as learned recently through the infamous ‘biryani-gate’ revelations. Somehow, Tamhane does just that, with a restraint that makes you wonder: if a 25-year old filmmaker can muse over its obsoleteness, how transparently prosaic must this framework be?

He constructs, with stunning authenticity, a grassroots trial that lays bare the follies of a profession subject to eternal cinematic exaggeration: Dalit folk-singer Narayan Kamble (Sathidar) is tried for allegedly abetting the suicide of a manhole worker through provocative lyrics.
Centered about a Session’s judge (Joshi), public prosecutor (Kulkarni) and young defence lawyer (Gomber), Court pokes and prods with the routine matter-of-factness of its rabble-rousing ‘criminal’.
A fire burns in Kamble’s heart; a fluctuating ball of passion seen in the eyes of soldiers fighting for a future even they aren’t sure about. This is only visible when he sings—nay, sermonises aggressively against generic forms of injustice. You’d think he spends days penning fierce lyrics and organising marches, as mainstream social-commentary sagas have led us to believe. But he can do this in his sleep; his activism has a switch, a green button, and a practiced-veteran air about it. It’s impossible to tell if years of fighting have worn him down into a robotic drone, or if he’s doing it because he genuinely cares.

Tamhane creates an illusion of going behind the scenes; everyday lives are captured with the murky pragmatism of a docudrama. The jokes write themselves; they aren’t so much made as observed wryly in every procedural detail, every middle-class Maharashtrian and prosperous Gujarati trait.
In combining this unsettling level of realism with fiction, in telling a story without having to read it out, the mirror he casts on Indian law-keepers is unsparing, almost patronizing. Court is the movie equivalent of a film critic sitting back and smirking, quietly bemused, at the waves of mediocrity unfolding on screen.

This is not a courtroom drama, but a startling representation of how there is perhaps no drama behind and within courtroom proceedings.
Lawyers are heard discussing the speed of judges in gossipy tones. Judges—personifications of facts over superstition—are seen advising relatives about auspicious evil-eye rings. After probably having poor innocent sods sentenced to years in prison as part of their 9-to-5 jobs, veteran female lawyers are seen cutting vegetables in the train, before serving their husbands and enjoying fierce anti-migrant plays on the weekend.
As extraordinarily natural as the performers are (especially Miss Kulkarni, her lived-in routines and her rambling opening statements), one poignant face stands out: Usha Bane as the widow, when interrogated; her deer-in-headlights face, framed with a desolateness reserved for guilt, hints at a tragic household story. A blank look betrays years of suffering and domestic violence at the hands of the ‘victim’ in question.
She somehow finds a disconcerting voice outside court during her brief interaction with Gomber—who, despite a questionable townie Gujarati accent—gets the entitled flappy walk and gait down pat.
His family members are perhaps the most authentic part of this film; like most wealthy Gujaratis, they dine on weekends at the same old ‘pure veg.’ upper-class thali joint, and follow a routine that revolves around food and property.

Gomber deserves credit, as another independent producer-actor in recent years (after Sohum Shah in Ship Of Theseus), for the gumption to back an original voice.

Tamhane and his team haven’t merely been granted permission by authorities for their cameras to freely roam institutions. They actually recreate, from memory and considerable research, the physicality and lifeless bustle of lesser courts through unobtrusive long static shots.
Time stands still when a robotic judge dismissively fines a bunch of huddled embarrassed Mumbaikars arrested for traveling in a train’s handicap compartment, or when an incompetent lawyer presents a hopelessly ill-prepared argument about a stolen watch. Even his client, clearly a thief, is too sheepish and embarrassed to look.

This is all far too unfamiliar for viewers brought up on a staple of decisive ‘Mi-lord!’ monologues and background scores that punctuate the judge’s eternal sledgehammer of justice.
Tamhane, unlike most directors, doesn’t feel the need to celebrate his culture and craft. He creates a self-explanatory portrait. His views are there for everyone to see.

The painstaking strength of this film could also be misconstrued as its weakness; ‘Court’ is perhaps so good a movie that it doesn’t look like one. It is unyielding, funny, mundane, occasionally boring and thought provoking, if only in hindsight. Just like life.
Live it.