Monica, O My Darling: Of Snakes and Ladders

The poster of Vasan Bala’s Monica, O My Darling shows three characters standing next to each other. There is Vijayashanti Naidu (Radhika Apte) holding a kulfi. There is Jayant Arkhedkar (Rajkummar Rao), wearing a shirt with a dead man. And then, there is the eponymous Monica Machado (Huma Qureshi) standing in a red dress. Behind them lies a board of snakes and ladders, which points to the film’s premise. Monica, O My Darling is about people trying to climb up the social mobility ladders but are bit by snakes (literal and metaphorical) in a game of chance. The film opens in a robotics factory named Unicorn, where a worker, Dev Prakash (Shiv Chauhan), is murdered by one of the robots. Six months later, a corporate worker Jayant is promoted to the board of directors by Chief Executive Officer (CEO) Satyanarayan Adhikari (Vijay Kenkare). Jayant is engaged to Adhikari’s daughter Nikki (Akansha Ranjan Kapoor), but he is also having an affair with the CEO’s secretary Monica. Jayant soon finds out that Monica is three-timing him with Adhikari’s biological son Nishikant (Sikander Kher), and the financial officer at Unicorn Arvind Manivannan (Bagavathi Perumal). All three men then decide to kill Monica. Things, as expected, do not go by plan, and someone else is murdered. Then, police inspector Naidu is called upon for investigation.

Monica, O My Darling has been adapted from the 1989 Japanese novel Burutasu No Shinzou (Heart of Brutus), written by Keigo Higashino and made into a film in 2011. Writers Yogesh Chandekar and Vasan Bala also take inspiration from Sriram Raghavan and some of their other favorite filmmakers to create a film reminiscent of the Hindi films of yore. In the opening credits, Sriram Raghavan is thanked, and it becomes clear why because there is a lot of him in the film. The plot of the murder, where Jayant travels to Devlali and then comes to Mumbai via train to dispose of Monica’s body and then return to Devlali, has been adapted from Raghavan’s Johnny Gaddar (which itself took it from Jyoti Swaroop’s Parwana). In that film, Johnny (Neil Nitin Mukesh) traveled to Goa and Pune via fight and train on the same day to steal a huge sum of money. At some other point in Monica, O My Darling, Johnny Gaddar is also seen playing on the television. Jayant is also called Johnny by his friend Gaurav (Sukant Goel). There are other references to Raghavan’s films: Ek Hasina Thi, Badlapur, and Andhadhun. At one point, a blind lady calls Jayant by the name of Yogesh (also the writer of Monica, O My Darling, and Andhadhun).

Apart from Sriram Raghavan, there are countless references to other films. Some of these films include Baazigar, Caravan, Hum (a character is called Captain Zattack), Maqbool, Mard Ko Dard Nahi Hota, My Cousin Vinny, Nagin, Psycho, Teesri Manzil, and Trapped (the whole sequence where Jayant comes down from the building). There is also a dialogue related to an old Nirma advertisement. The film’s most popular scene floating on social media is the one where the names of directors and characters are written as residents of an apartment building. What is interesting about the scene is that it mentions, “Thank you for pausing to read the names.” This, to me, feels like an instance of breaking the fourth wall where the film director is directly conversing with the audience. Vasan Bala’s first film, Mard Ko Dard Nahi Hota, also had many such references related to films, but it became difficult to care for them after a point. Did those really add anything to the film? I was unsure, and I am saying this as someone who loves finding these references. That film became pretty much unwatchable for me due to its boring storyline. On the other hand, Monica, O My Darling is a far better film and is a lot more fun.

Beneath the veneer of musical murders, Monica, O My Darling is a story of class and aspiration. Jayant grew up in a middle-class family in Angola, where his father worked as a mill worker, and his mother stitched fall on the sarees. Jayant wanted to escape the hopelessness of his middle-class origins to make it big in life. He studied to get into the premier Indian Institute of Technology and got a job at Unicorn. He then worked his way up to become one of its board of directors. Satyanarayan treats Jayant like his own son, often ignoring his biological son because Jayant is the unicorn in Unicorn. Jayant is reminded by Nishikant that he does not belong there and is a pretender. The perfume he wears does not make him one of ‘them,’ which also comes back to haunt him in the end. Jayant is even called a parasite, reminding one of Bong Joon-Ho’s class conflict film Parasite. Monica, O My Darling hinges on this premise that Jayant will do anything to protect his stature and will go to the extent of killing others. In a wonderful moment towards the end of the film, when Jayant and Monica are fighting each other, Jayant sees his reflection in the mirror, and it hits him how vile and vicious a person he has become.

The story of Jayant’s friend Gaurav also brings to the fore a similar element. While Jayant moved on to become Jay from Johnny, Gaurav was left behind. He becomes invisible to Jayant. Even at the time, when Jayant comes up with possible names of suspects who could have murdered Monica, Gaurav does not figure even once in his imagination. He gifts a watch to Jayant, who immediately dumps it in the dustbin (it is Jayant’s own watch that saves him in the end). On the other hand, Gaurav is treated as an equal by Nishikant, which is why he agrees to do whatever he is asked to do so initially.

In this aspect, the presence of robots and mills also adds to the element of being left behind. One of the crucial scenes in the film occurs at Inaamdar mills. These mills used to employ hundreds of workers and even used to appear in films in the 1970s and 1980s. However, they have now been relegated to history as machines and robots have taken over a lot of manual work. In an early telling moment in the film, Jayant displays robots acting as bartenders. It is a matter of time before robots can do almost every task, widening the class gap between people. We saw a bit of mill-related politics in Anurag Kashyap’s Bombay Velvet, which Vasan Bala wrote. In that film, too, the lead character is named Johnny, who wants to become a ‘big shot.’ 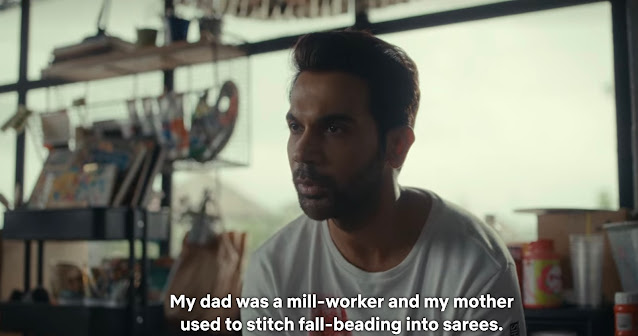 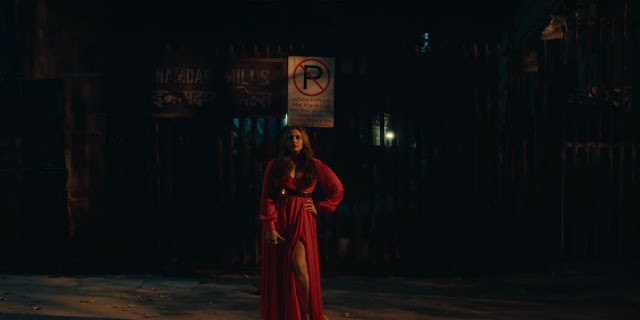 The most intriguing part of Monica, O My Darling was its connection with animals. There are animal-related references throughout the narrative. Jayant calls himself a horse. He is also called a unicorn. His sister Shalu (Zayn Marie Khan) gifts him a frog. Later, when Monica’s truth is revealed, she is shown butchering a leopard. After Nishikant’s death, a leopard is also shown walking. These animals symbolize the relationship between the film’s characters to mirror the one that is like between the predator and the prey. When Arvind and Jayant find out that Monica is alive, the song that plays is about the hunter getting hunted. The fight between Monica and Jayant also gave primal vibes, as if two wild animals were fighting. Post the fight, Monica comments that she has dealt with several bhediyas before in her life. This aspect is also seen in the film’s meticulously designed artwork. The paintings on the rooms and the walls of Hotel Prince Amar, where the three men plot the murder of Monica, show animals being hunted. One of the paintings is Dogs Attacking Fallow Dear by Frans Snyders. Another one is the same setting is Dead Lion by Frans Snyders. And the most hilarious of them is So You Wanna Get Married, Eh? by William Holbrook Beard, which shows three bears talking among themselves and replicating the same painting are the three men in the room discussing the plan to kill Monica. Finally, there are the snakes that make an appearance at crucial points, as also depicted on the film’s poster. 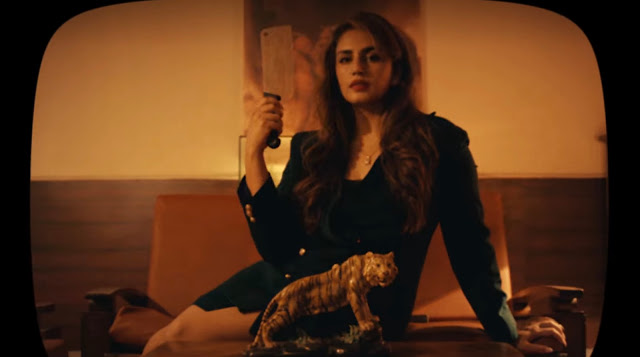 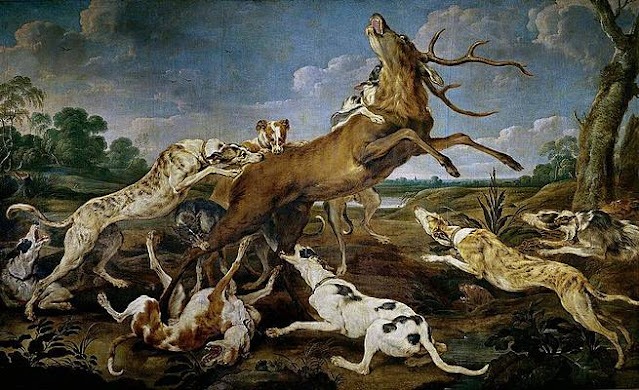 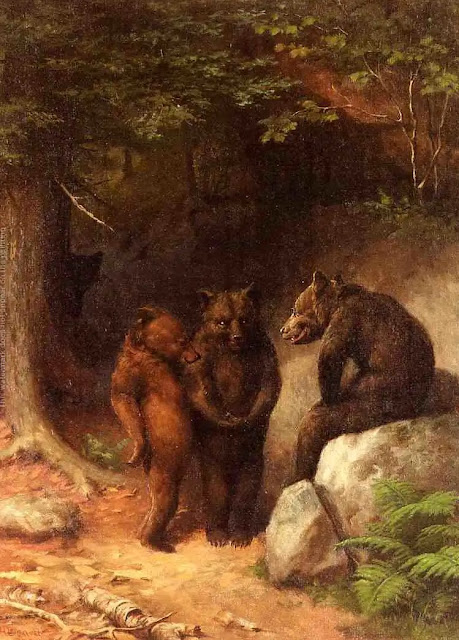 Monica, O My Darling is elevated by its music, adding to its retro feel. The songs composed by Achint Thakkar and Varun Grover feel like they are from an older Hindi film and that we have heard them before, but, in fact, they are totally new. Love You So Much was my favorite, and it reminded me of a Goan folk song. In terms of performance, Sikander Kher was the best. He should do more films. And it is the first time I have actually liked Radhika Apte. She is hilarious in some scenes. Rajkummar Rao and Huma Quereshi are good. It is worth mentioning that Rajkummar Rao’s character Jayant is the other end of the character of the one he played in Ramin Bahrani’s The White Tiger.

Monica, O My Darling has a lot of style. The film is not about who did it but how it is done. There are some questions it never really answers. For instance, it is never revealed who the mysterious woman was in the car? Or, what happened to Jayant’s bicycle? But it did not bother me much. Because, as Naidu tells Jayant at one stage, the more perfect the background story is, the more it seems doubtful. Giving some slack to the story and giving it some feelings is better.