Titli: The cycle of violence

Films with violence are difficult to watch, but I mustered some courage to watch Kanu Behl’s Titli. It is the story of a family living in a colony in Jamna Paar, which, as Pataal Lok also told us recently, is nothing less than hell. There are three brothers—Vikram (Ranvir Shorey), Bawla (Amit Sial), and Titli (Shashank Arora)—living with their father (Lalit Behl) in a cramped house that reeks of claustrophobia. The two elder brothers Vikram and Bawla go on a gasht where they rob cars during the nighttime. They involve their youngest sibling Titli in their business of stealth and violence. However, he decides to rebel and plans to escape the nether world of Jamna Paar by opening his parking lot in a mall in Meerut. 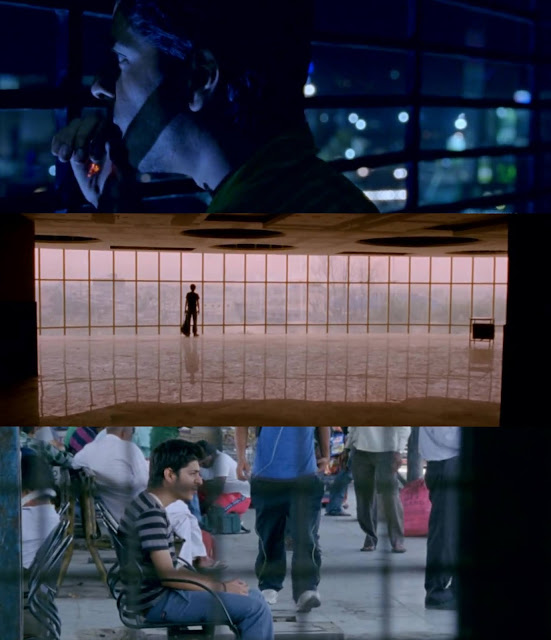 Titli’s mother wanted a girl when she was expecting him. But when her child turned out to be a boy, she still kept the name Titli—a butterfly—an unusual name for a boy. Titli is about Titli’s quest to fly away from the circumstances he was born into, but it is also about his emasculation. His brothers felt that a woman in the family would be rewarding for their business. They decide to marry him off to Neelu (Shivani Raghuvanshi), aiming to keep him in check from escaping. Neither Titli nor Neelu is given a choice in the matter. On his wedding night, his wife resists all his attempts to get physical with him. Later, he also takes her to her lover Prince (Prashant Singh) and stands outside when they get intimate with each other. Most crimes, including sexual, are often about power. Titli is powerless in front of his brothers, and he gradually tries to control his wife through violence, just as his brothers did. Earlier in the film, when a dining table is delivered to the family, the delivery guy keeps addressing Vikram’s wife Sangeeta (Sarita Sharma), instead of Vikram, which triggers him. He, then, beats the guy black and blue. It again depicts the role of power in triggering crime. The authority of Vikram was challenged. 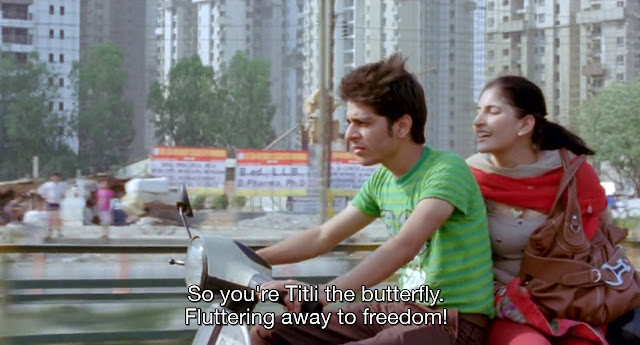 Titli is co-written by Sharat Katariya, who also made Dum Laga Ke Haisha. In terms of structure, there are quite a few similarities between the two films. Both depict that men can be victims of patriarchy. A 10th-Class-fail Prem (Ayushmann Khuranna) is married off to a well-educated Sandhya (Bhumi Pednekar) against his wishes by his family because she will be able to find a government job in Dum Laga Ke Haisha. The couple eventually decides to be together, but there is violence in both films. Titli focuses more on the physical aspect of violence, while Dum Laga Ke Haisha scores more on emotional violence. Is marrying someone to whom one feels no attraction less than violence? In addition, Prem is also emasculated where his father beats him for not agreeing to marry Sandhya. He is treated like a child. On his wedding night, his father gives him a pack of condoms and advises him to have a kid only when Sandhya finds a government job.

Titli is about the cyclical and hereditary nature of violence that passes through different generations. The father reveals that he has not hit anybody after his last trip to Vaishno Devi. Vikram was given the baton to continue the family tradition. After that, Bawla joined their business. Now, Titli has been asked to do the same as well. Vikram tortured Titli through beating. Gradually, Titli does the same with Neelu. He was becoming like his own brother. The same violent streak in the way they treat their wives. The way they both use the hammer. Their father keeps a photograph of his own father who was, perhaps, in the same field. At another point in the film, Titli sees a dream where he goes upstairs in a skyscraper building, and his grandfather’s photograph keeps falling on every floor. The scene is shot in a way that shows the top view of the stairs of a building in the form of a cyclical loop. There are more symbols related to their connectedness, especially seen in the end. The four steel glasses. The four toothbrushes. The four chairs on the dining table. The same type of discolored vests that they wore. They are all the same. 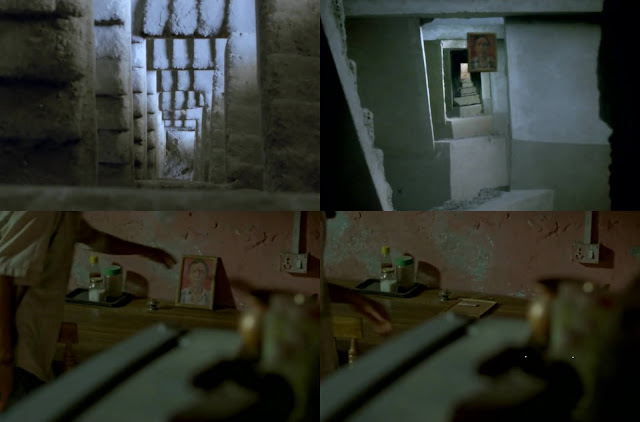 The cycle of violence 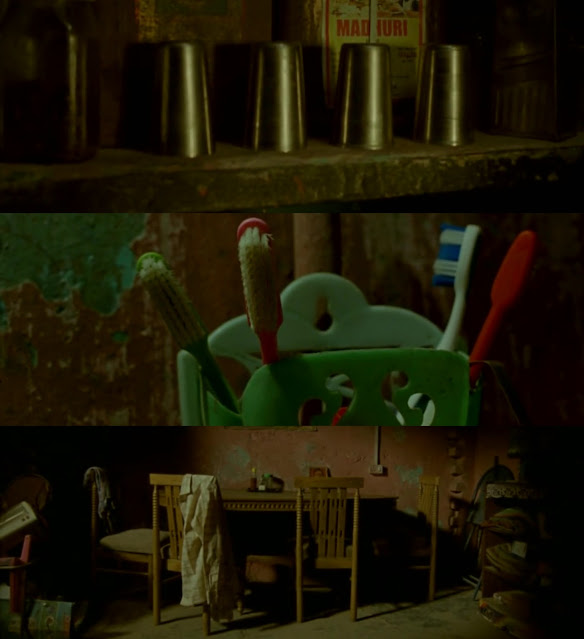 The film further uses the retching sounds made by the characters while clearing their throats to depict this cyclicity. The father, Vikram, Bawla, and Titli—all the men in the family are depicted making the same sound while brushing their teeth. It is as if something is stuck in their throats. When Titli gets his parking space, he cannot stop throwing up. His continuous vomiting was a signal that Titli could take out that streak of violence stuck in him. He gets back his money and comes to his house. He then puts down his grandfather’s picture on the dining table, which he also saw in his dreams, symbolizing his initiative to cut off his with his family’s occupation. We don’t know if he was successful later in life, but maybe Titli could escape and start afresh with Neelu. 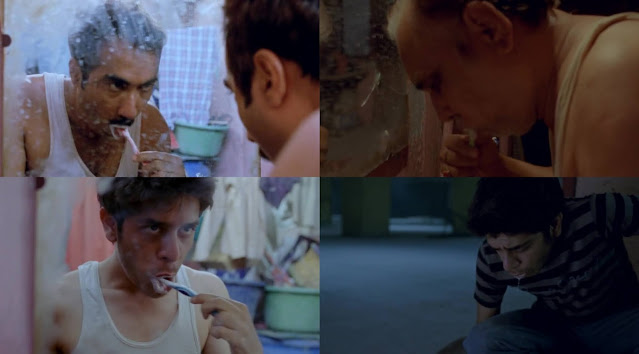 Vomiting
The most horrible character in the film was the father. He might not have actively participated in the violence, but there is a sinister streak in him. Early in the movie, when a dining table was delivered to their house, and his sons beat up the delivery people, his expressions belied that he enjoyed it. When Vikram is beating Titli, the father is standing there casually enjoying his tea. He is always in the background. While the violent brothers expressed emotions (Vikram is seen crying, Bawla is seen crying), something was menacing about their father, like the scar on his chest. In the end, Titli whistleblows the plans about his brothers’ robbery plans to the police; the father senses something and changes his tone with him. He becomes nice to Titli, while earlier, he kept blaming him for their family’s issues. Vikram’s wife Sangeets rightly calls him a pig. 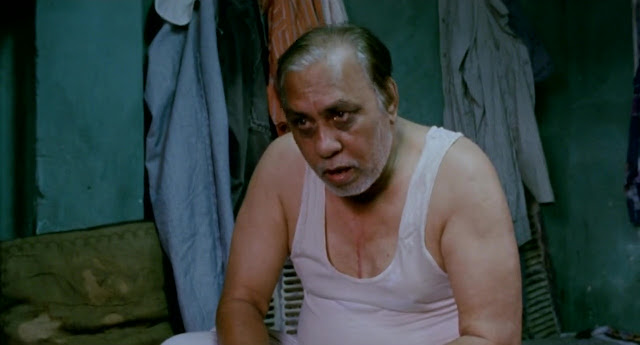 When Bawla suggests that Titli should be married, I wondered why he did not offer his own name to get married. It is later hinted Bawla that is gay. He was in a relationship with someone who used to visit their house. In another scene, Bawla is also crying after a break-up. All the family members know about it, but they kept silent. The film does not make a big deal about it. 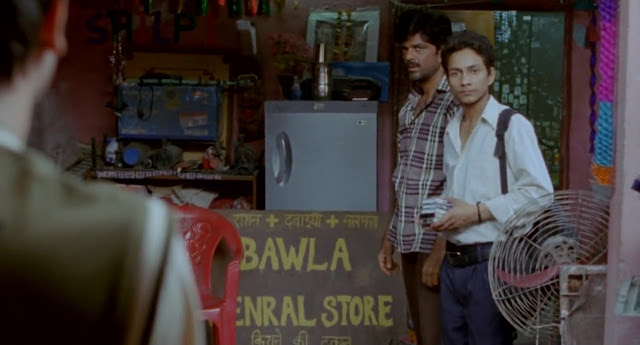 Titli also shows interesting imagery trying to capture the state of the characters. A bird flies in the sky. A wasp moves towards the light. A spider weaves its web (this occurs when Titli decides to make his plan to escape). Titli is also often shown trapped in cages. All through the film, the characters are eating. Other bodily functions, including retching and peeing, also make their presence felt. There is also the irony of playing religious songs, such as the Gayatri Mantra and Paayo Ji Maine Ram Ratan Dhan Paayo, in a family that propagates violence. Delhi is shot in a grainy dystopian manner. Everyone is corrupt. However, in some scenes, it became tough to follow the dialogue. It was not clear what the characters were saying. 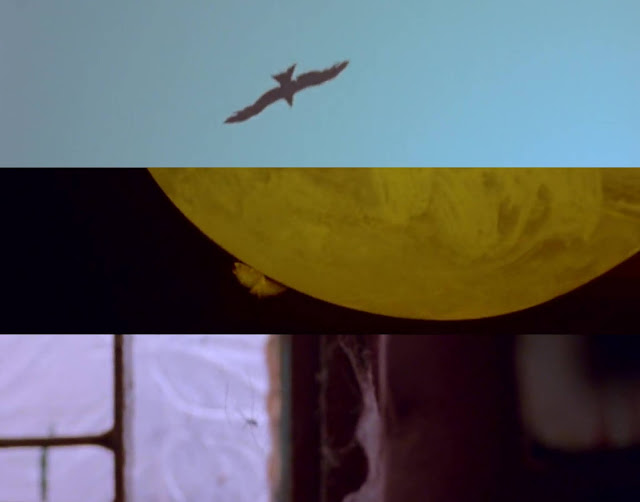 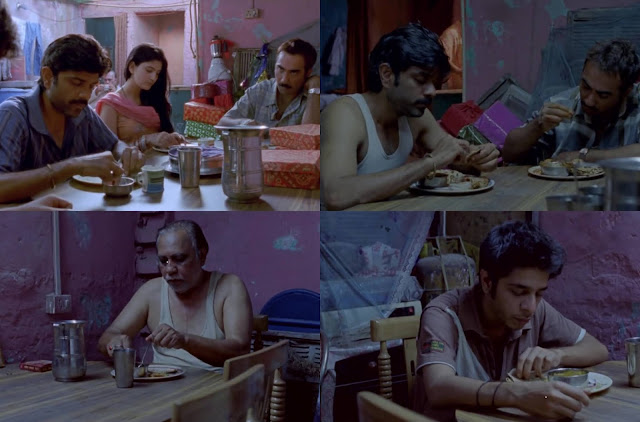 Ranvir Shorey is terrifying as Vikram. He is a hot-headed guy who lets violence and emotion take over him. He does not do it by choice, but there is no way out as he has to do it for his family. In Konkona Sensharma’s A Death in the Gunj, he again played Vikram, the testosterone-loaded man on one end of the spectrum, and there is Shutu (Vikrant Massey), the sensitive man, on the other end. The film was also about how society treats men who cannot mold themselves into a traditionally masculine role. 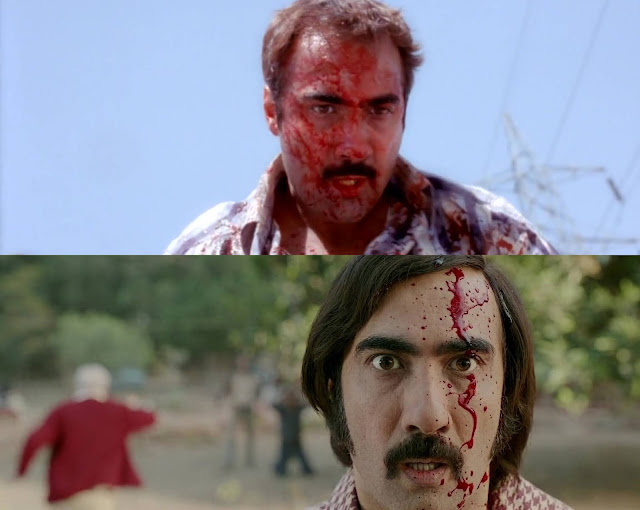 Like Titli, Neelu too is stuck and dreams of escaping with her lover Prince; however, she is unaware that Prince has no such plans. The film does not explain why Neelu’s family agrees to marry her to Titli, given the observable differences in the economic status of the two families. At multiple times in the film, Neelu keeps bringing the topic that she belongs to a good family. She keeps mentioning that her lover also belongs to a good family. Titli warns her about his horrible family where the entire neighborhood is aware of what they do. The often repeated word ‘dysfunctional’ is too light to describe his dark and terrifying family, which feels more ironic as the film Titli has been produced by a cinema house known for its family-oriented mainstream films. “Har family, family nahi hoti,” reads its tagline. Titli depicts the intersection of crime, power, and family, in a rapidly changing urban India. It is not an easy watch but is a memorable one for its anti-utopian portrayal of families. 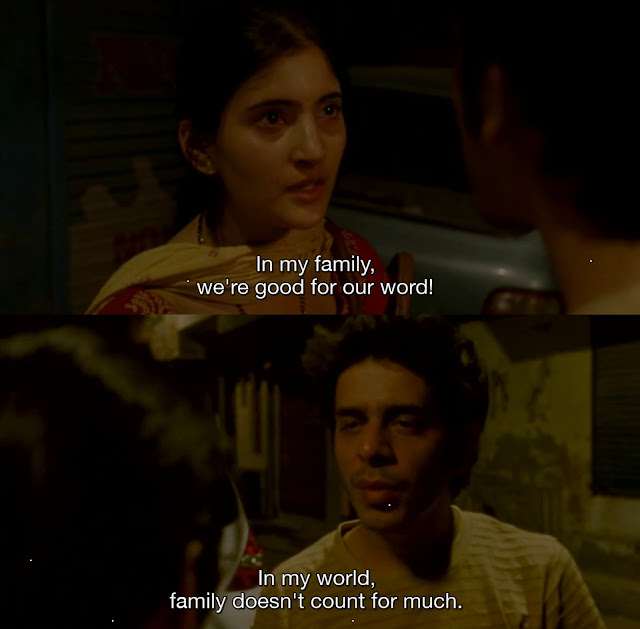