By Pankaj Sachdeva
There is a moving scene in Ritesh Batra’s The Lunchbox that has stayed with me all these years. Ila (Nimrat Kaur) rushes to her parents’ home. Her mother (Lillete Dubey) is sitting nonplussed as her husband (unseen) has died. She tells Ila that she always wondered as to what will happen when she becomes a widow. Now that the moment has come, the only thing happening to her is that she is feeling hungry. She felt love for her husband in the initial years but gradually it turned into disgust—she uses the graphic ghinn to describe the feeling. Caring for Ila’s father all his paralyzed life drained everything out of her. She now craves food. Paraathen khaane ka mann kar raha hai. The starved souls of The Lunchbox yearn for food representing the desire for the missing love in their life.

In Umesh Bist’s Pagglait, Sandhya (Sanya Malhotra) has lost her husband (unseen). She is locked in her room making her relatives think that she is in mourning. Sandhya’s parents come rushing to meet her but she is irritated at her mother’s crying. Bas, Mummy. Kitna ro-ogi. She asks her mother-in-law Usha (Sheeba Chaddha) for a Pepsi. Moments later, her friend Nazia (Shruti Sharma) turns up who is also a bit perplexed at Sandhya’s lack of emotion. Like Ila’s mother, Sandhya tells her friend that she is feeling hungry. Rona bhi nahi aa raha aur bhookh bhi daba ke lag rahi hai. Pagglait, which as we find out subsequently, also uses the yearning for food to represent the desire for love but its form is love for the self.

Sandhya’s husband Astik has died. The cause of death is never revealed. He is never seen in the film. There is neither any flashback nor any photograph. But his presence is felt throughout. The word Astik means a theist; someone who has a belief in the existence of god. In Pagglait, Astik is more a representation of Sandhya’s belief in her own self. All her life, Sandhya was made to go against it. She never learned to love herself. She was made to do things that took away this love. When Sandhya fell from a bicycle in the sixth grade, her mother returned it because if an accident happens, no one will marry her. Her mother made her follow superstitions because she believed those helped her score well rather than Sandhya’s own talent. Sandhya was forced to do an arranged marriage. Five months into it, she has still not adjusted to it.

When Astik dies, Sandhya finds out that he was having an affair with Akansha (Sayani Gupta). She wants to meet her. Sandhya pours her heart out to Akansha and reveals that she did not speak much to Astik. She thought things like love happened earlier in life and she never had the courage to love. She further adds, “Hamari tarah, Astik ko bhi pyaar karna nahi aata tha.” Like herself, Astik also did not know how to love. She never loved herself. She wants to now know what Astik was like. She is surprised to learn about the innate romance between Astik and Akansha. It is an affair between two individuals but it is also an affair between two emotions—Astik (meaning belief) and Akansha (meaning desire). In her quest to know more about Astik, Akansha becomes Sandhya’s akansha. Sandhya is completely enamored of her. She copies the way she uses her hands, the way she dresses, and the way she looks. When Sandhya visits Akansha’s home, she learns that she lives all by herself. She sees her own reflection in Akansha’s photograph. In the beautiful poster of the film, Sandhya sees Akansha in the mirror. In the café, Sandhya orders the same thing as Akansha. The belief was always missing in her life but she has now found a face to her desires. 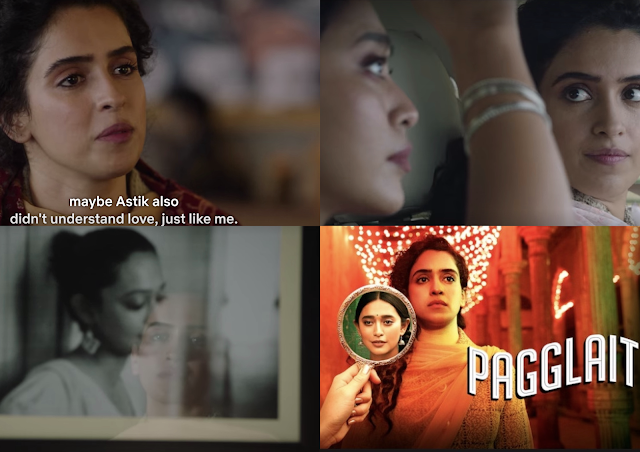 In the thirteen days after death, the soul liberates from the body and prepares for a journey to Yam Lok. In those thirteen days, Sandhya’s soul liberates her and prepares for a journey to meet her desires. Pagglait juxtaposes these two journeys splendidly. An earthen pot is kept outside the house with food to feed the soul during this time. Sandhya is forced to eat the bland flood during this time. On the fourth day of mourning, Astik’s ashes are dispersed in the river. Side by side, there is Sandhya eating gol gappas again underscoring that she is taking steps to fulfill her long-suppressed desires. On the tenth day of mourning, the soul becomes whole again. Pind daan is performed for Astik. The earthen pot is broken and the soul is released. During this time, Sandhya learns more about Astik and Akansha. She goes through a plethora of emotions. Like the soul is without a body in this period, Sandhya is seen in shadows and reflections in this period. On the tenth day, Sandhya forgives Astik and, finally, cries. On the thirteenth day, all rituals are completed for Astik. The soul moves away from the family. Sandhya runs away from her family forging a new path for herself. For me, these were the best scenes of Pagglait. 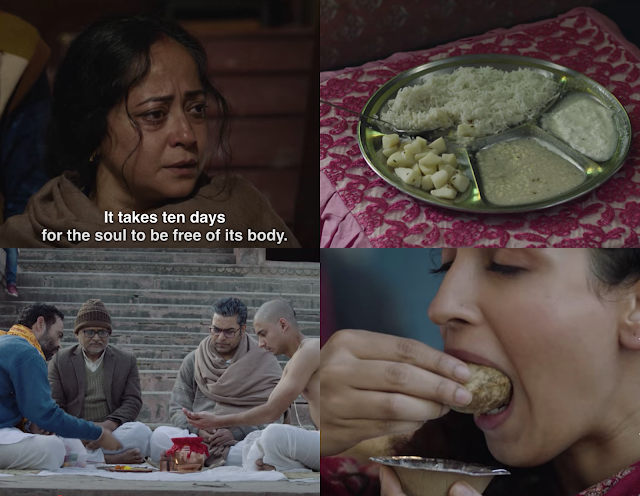 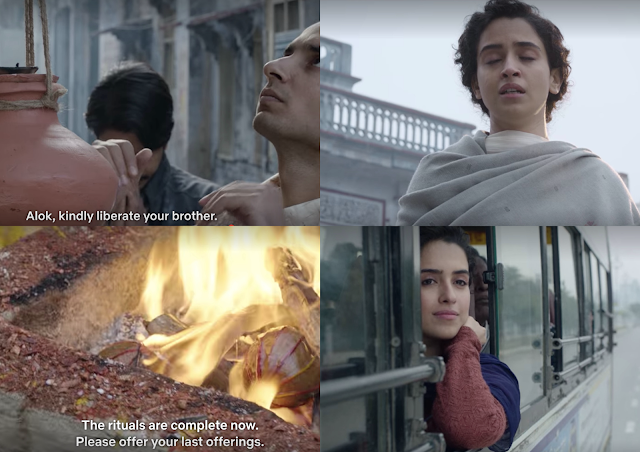 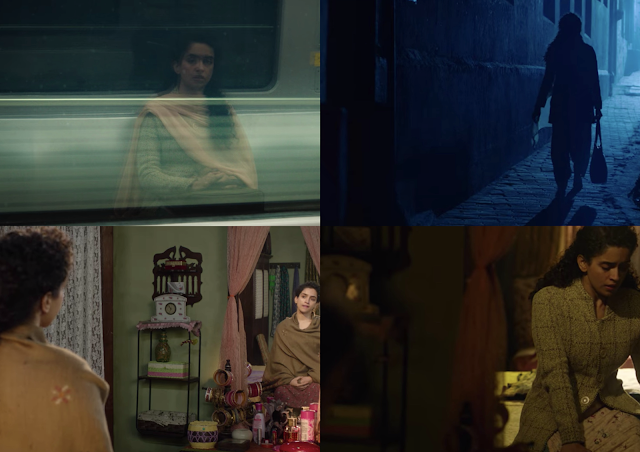 The film is not afraid to call out the hypocrisies, superstitions, and stereotypes of its people. Early in the film, Tayya Ji (Raghubir Yadav) is seen reading the book Atoot Bharat, a euphemism for the term Akhand Bharat, a pipedream of the Hindu nationalist. Later, he is seen reading Aryo ka Aadi Desh, another book with a similar ideology. He forces his nephew Alok (Chetan Sharma) to eat bland food during mourning but secretly enjoys a drink himself; which Alok also points out to him. He takes pride in having an open-minded family but when Nazia who is a Muslim comes to the house, all this openness turns to hesitation. She is served tea in a different cup. She is made to eat outside the house. Parchun (Aasif Khan) offers to take her out for biryani but she says she is a vegetarian. “Har Sachin, Tendulkar nahi hota.” This is something that many progressive and urbane shows also espouse. In the recent Bombay Begums, the top shot executive Fatima (Sahana Goswami) has lunch and the camera pans to show that she is eating biryani; the implication being that she is a Muslim. At a later stage in Pagglait, Astik’s father (Ashutosh Rana) goes for his son’s last rites and a bunch of Pandits almost harass him while offering their services. Death is a business. Even the family members are more interested in the insurance money. The only people grieving are the parents of the deceased. It is precisely the way it works in life. Even the attitude of Sandhya’s mother (Natasha Rastogi) undergoes a change when her daughter gets the money.

Pagglait creates tension in some scenes using noise and silence. When Astik’s uncle (Rajesh Tailang) arrives with his family, he starts a war of words with his brother. While the people fight, the uncle’s daughter keeps on banging the toilet door, adding more tension to the proceedings. And, the other scene is when Sandhya gets the insurance money. The entire family is gathered quietly but the tension was so thick that it could be cut with a knife.

The film also weaves tiny details in the narrative beautifully. It opens with the squeaking sound of the spring in the cycle seat. The house is named Shanti Kunj. The grandmother used to take Usha’s name throughout but she starts taking Sandhya’s at the end. Usha stands for dawn and Sandhya stands for dusk. Sandhya was doing embroidery throughout which turns out to be a smiling face as revealed in the end. When she goes to the bus stop, there is an old woman who is driving the rickshaw. It is rare to see someone like her in films. I was thinking of Tumhari Sulu that also showed all the drivers in the film to be women. At different stages in the film, Sandhya keeps looking at Astik’s nicely lined shoes, perhaps, another hint of her plans.

Pagglait uses other films to add humor to its situations. Early in the film, Parchun mentions Alok looking like Ghajini from Ghajini. The doorbell at their house is a character of its own and plays Ooh La La from The Dirty Picture. Bua mentions Dolly Ki Doli after learning the life insurance money given to Sandhya. Finally, the film’s funniest line is spoken by Tayya Ji where he invokes Pad Man during a discussion on Sandhya’s pregnancy.

One thing about the film was that it relies too much on exposition. I wish there was less of it. For instance, when Sandhya finally cries, she also says to her friend, “Mujhe rona aa raha hai.” One cannot see her hunger, but one can see her tears. There is no need to explain it. In another scene, Astik’s father talks to his mother about the meaning of the word Astik. These details can be discerned by the audience. When she runs away, Sandhya spells out her motivation in letters (accompanied with a voiceover) to her relatives. And, then, there was the music. Beautiful on its own, but here, it becomes a way to explicitly voice Sandhya’s inner feelings. I also felt the music did not get along with the tonality of the film. Phire Faqeera is gorgeous though.

In Pagglait, there is a focus on Sandhya’s hands. She sees Akansha’s perfectly manicured hands and becomes conscious of her own, and tries to hide them. At the doctor’s clinic, she stops Nazia from fiddling with her hands. This was reminiscent of Ritesh Batra’s Photograph, where Sanya Malhotra played a quiet Miloni and there was the focus on her feet. Whenever she seemed to be nervous, there were shots of her twitching her feet. As Miloni does not articulate her thoughts and prefers to be silent, these images of her feet indicated her nervous state. Sandhya is an extension of Miloni in some ways. They both are obedient pliable people who have followed whatever has been told to them. They always acquiesced to their parent’s choices. In an early scene in Photograph, Miloni decides to buy what her family thinks looks good on her. The time she is asked about her favorite color, she is unable to answer. In Pagglait, Sandhya sees Astik only had blue shirts. He never wore anything else. After a heated meeting with Akansha, she comes and wears one of his blue shirts. Towards the end, she reveals that her favorite color is blue. When she runs away, she wears blue. She was struggling to embrace it but with Akansha, she has found Astik—the belief in self—and is ready for a new journey. An ending also signifies a beginning. In death, Sandhya also found life. 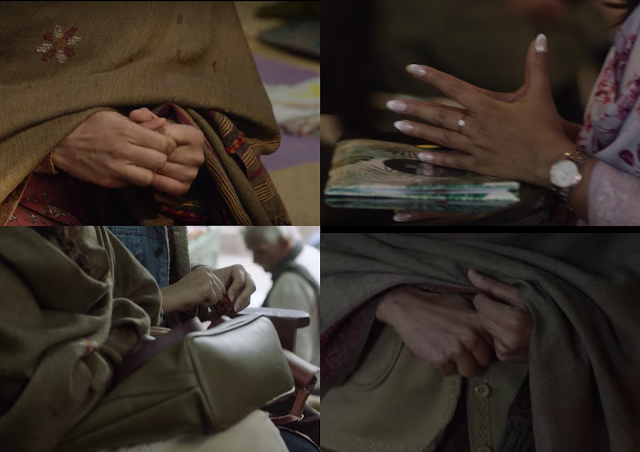 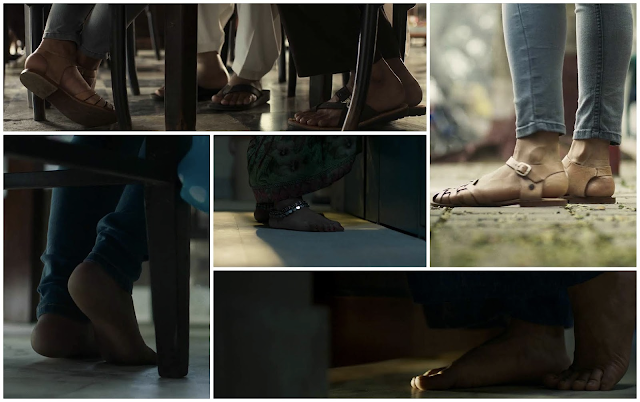 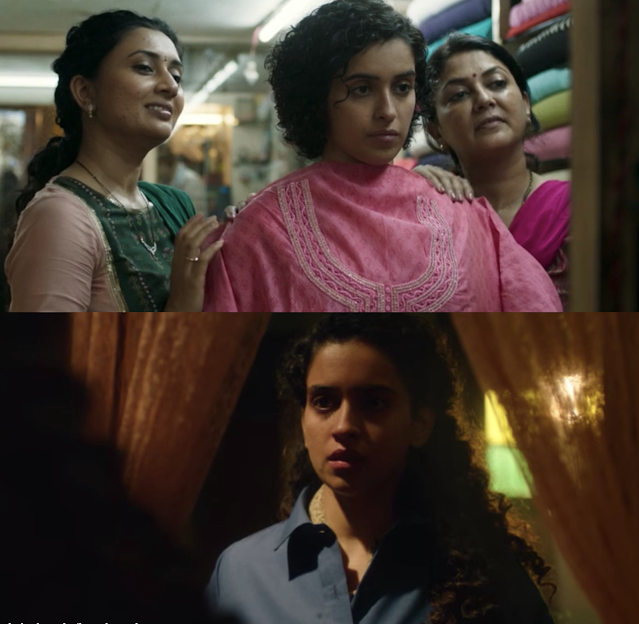 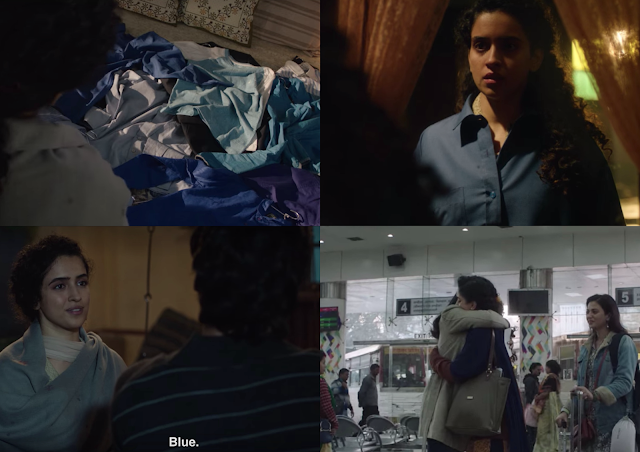