It was perhaps the second week of the second month of lockdown in Toronto – so sometime around mid-April in 2020. I was sprawled out on the bed, staring at the ceiling, when a thought appeared unbidden into my mind – I wonder when I’ll go to Delhi next.

From the beginning, when initial news of a global pandemic had started to filter through our collective consciousness and its enormity had started to settle into our bodies, I had a sense that life was going to come to a pause for a few months – at the very least. But it wasn’t until April 2020 that the full ramifications of that idea had started to sink in. When will I travel next? How long will I need to quarantine, if I do travel? Is it even worth it?

As someone who often lives in limbo between Delhi and Toronto, and has many destinations within India and around the world that I hope to visit, it was a puzzling thought. There’s no particular reason for me to visit Delhi in the near future, other than the desire to be in my former hometown, whose neighbourhoods and bylanes I can still mentally map without a Google search. But the pandemic had me second-guessing any travel plans. Conversations with relatives in India often ended with them sighing, “Ab kya pata kab aana hoga,” the uncertainty crackling through the airwaves between us.

As well, like everyone else, I found myself calling up old friends or messaging them out of the blue. High school friends. College friends. Neighbourhood friends. The whole world seemed to be catching up with one another, checking in. “How are you? How has life been? Are you OK?” When I was messaging one friend, who like me lives outside of India, he asked, “Do you miss Delhi?”  I didn’t even hesitate. “All the damn time.”

As I lay on the bed, considering the ceiling, weighed down by unanswered questions, another thought came to me. What if I made a podcast about two people walking around Delhi? Two friends? No, what about two people who dated briefly in high school, lost touch with each other and then decided to reconnect – in Delhi. What if they revisit old haunts, as they catch up with their present lives. As the idea started to take shape in my head, I started to think of the ways in which I could recreate the city through sound.

Whenever I’m in Delhi, I try and record as much sound as I can. You could call them field recordings. But for me, most of the time, it’s just a matter of pulling out my phone and hitting record on a voice memo app. The start of an auto. The long creak of a rusting iron gate. The rhythm of a sweeper’s broom on a dusty road. I especially love recording crows – I rarely hear their long croaks among the chitter-chatter of blue jays and cardinals in Toronto. 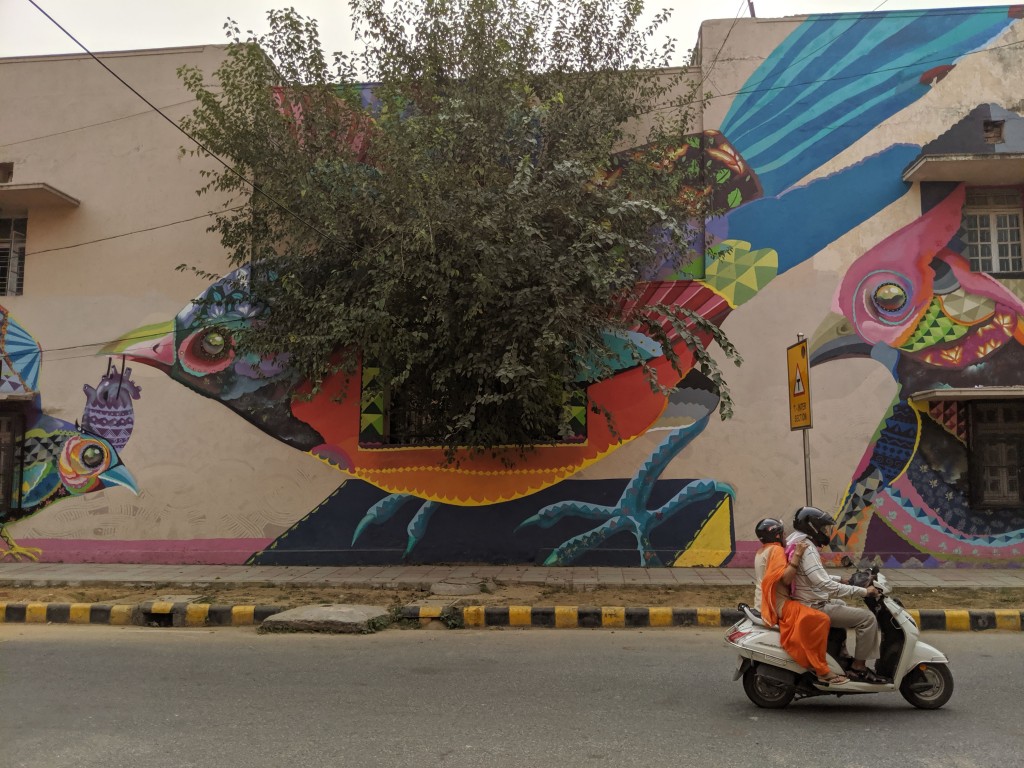 Sometimes, when I am watching a YouTube video or Zoom interview, and hear the flourish of the horn of a truck or bus passing by, it thrills me; when it happens during an interview I’m recording, it annoys me to no end. I stumble across my sound recordings on my phone from time to time. And for a brief spell, they take me back to that moment, that memory of me trying to capture time.

It took me a few days of thinking through the story and the sounds I could play with before I messaged Ali Kazmi. He’s a well-known Pakistani-Canadian actor, with several prestigious films and TV series under his belt. We had spoken, laughingly in the past, about potentially doing a project together. I sent the message almost on a whim. What’s the worst that could happen, I thought. He’ll say no. To my immense surprise, Ali was interested in the idea from the get go. “It’s like Before Sunrise,” he said in our first phone call. I hadn’t made that connection. It would be more like Before Sunset, I mused, but different.

I started writing the podcast in May 2020, and had a draft ready pretty quickly. The story of Aditi and Akash, who first met in the mid-90s and reconnected via LinkedIn more than 20 years later, wrote itself. I borrowed a little from real life – stories of first loves, missed connections and ongoing regrets I’d heard over the years – and made up the rest.

I brought in my skills as a radio documentary maker to the script. You write for the ear, not the eye. Shorter sentences, writing in images, keeping the audio in mind. Since I was writing fiction, I didn’t have to worry too much about facts, and could have relied on my personal memories of Delhi. Even so, I researched details, looking through images and videos of neighbourhoods as I wrote scenes and characters.

Performing the script with Ali Kazmi was a breeze. We met on a weekend in August 2020. There had been a brief lifting of lockdown measures in Toronto, and we made sure to take pandemic precautions. We’d already done a read through over Skype, and I’d incorporated Ali’s many improvisational suggestions. Plus Ali is a pro. With the most minimal of voice modulations, he can deliver completely different takes to the same lines. He’s also a perfectionist. Since we’d ironed out most kinks in the read through, all that I was really listening for was that we didn’t pop our p’s. (But I still couldn’t catch all of them; this is where a sound engineer/studio tech is indispensable.)

Although I had a small library of Delhi sounds, I needed specific audio backgrounds to create a soundscape for Aditi and Akash to walk through. I hired a local journalist to trace the paths that Aditi and Akash would take over four chapters – walking around Connaught Place, the Chanakya Mall, South Ex and Khan Market. I am from the “Let the tape roll” school of audio reporters, which usually makes for long sessions of editing nightmares later on. But you also discover little gems in all that tape you gathered: a giggle here, a sigh there, a brief exchange the microphone happened to pick up in the background. There were long nights of listening, clipping and mixing. Slowly, it started to come together.

It wasn’t all just smooth sailing. Like many creatives, I was reluctant to share my work-in-progress with others. When you’re working on a passion project, that instinct to hold all your cards close to your heart can be ever more intense. But then I remembered Gursimran Datla, a young filmmaker/critic I had conversed with a few times in Toronto. I needed help with mastering the audio, and figured he might be interested in being an extra set of ears. Gursimran and his colleague Vinod K. Ram, who lives in Chandigarh, came on board.

Both added their own sets of expertise: Vinod added foley sounds, besides mastering the podcast. (It was quite difficult to get some very specific sounds that were missing such as a swanky coffee shop in a mall, especially due to lockdown restrictions.) Vinod also enlisted some of his actor friends to voice small lines of dialogue that were necessary, sometimes subbing in himself. Gursmiran proved to be the sensitive editor I didn’t know I needed. His insights into human exchanges were deeply meaningful; the edits he suggested were seamless. I especially appreciated the sound breaks he recommended in the final episode, where Aditi and Akash are having a complicated conversation in a bar – at times terse, at times deep, with equal parts of regret and acceptance mixed in.

Then there was the theme song. I’d asked Pakistani-Canadian music composer Haniya Aslam (of the famous Zeb and Haniya duo) if she could suggest some music. Since Haniya was busy with a bunch of projects, she pointed me towards a Pakistani group I’d never heard of before: Poor Rich Boy. When I Googled them, I came across their SoundCould page and clicked on the song “Samandur Ki Teh Mein.” I immediately fell in love with it. I couldn’t explain why, but it felt to me like this was the perfect song for Darmiyaan. Haniya put me in touch with Zain Ahsan, one of the founding members of the band, and he agreed to let me use Samandur Ki Teh Mein. 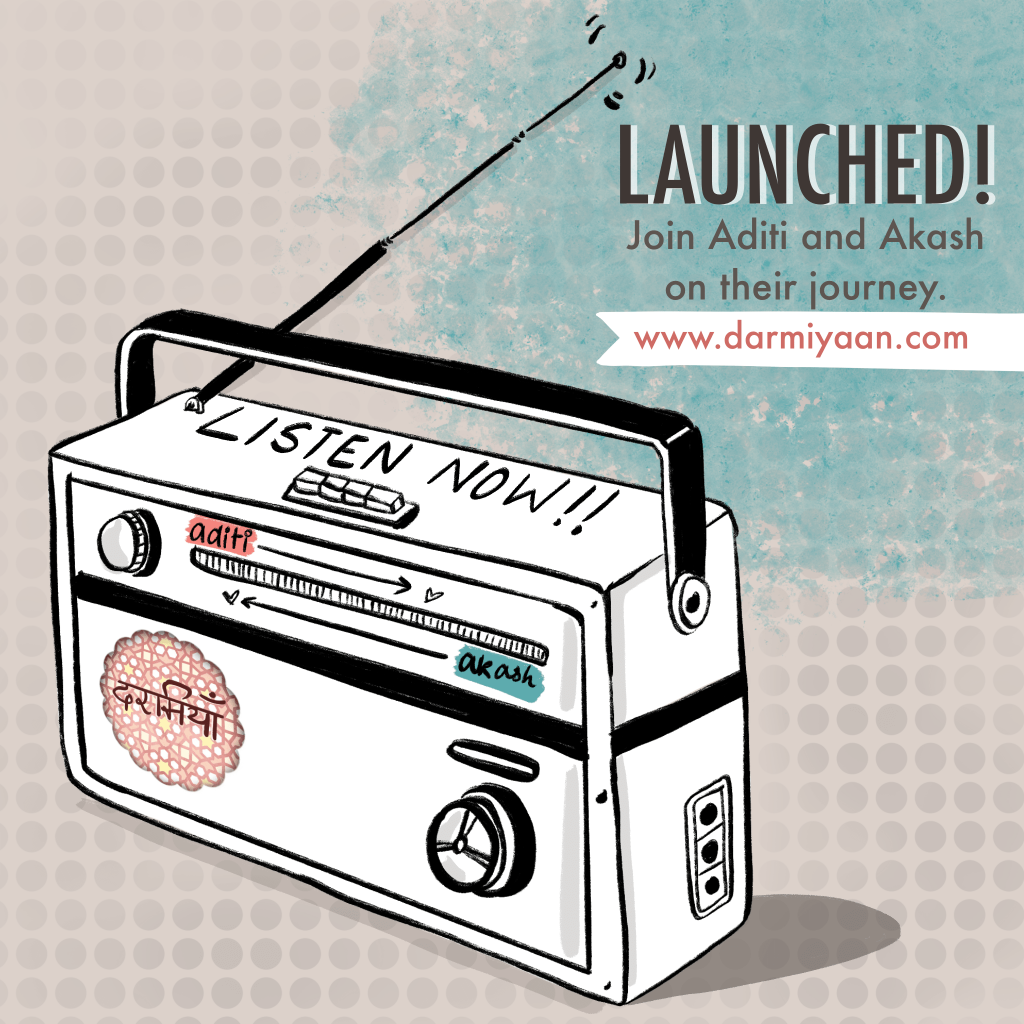 Like I said before, Darmiyaan is a passion project. It’s a story about immigrant life and living in between imaginary lands. It’s also about modern day relationships, and navigating those tricky terrains in between your past, present and possibly your future. It’s also told from a decidedly female perspective, from Aditi’s point-of-view – although I did try and also do justice to Akash.

It’s a story that I likely couldn’t tell as a reporter. Fiction allowed me to give it a kind of intimacy. At the same time, I wanted to keep things real. Real life is messy. There aren’t many neat conclusions; instead, you often find yourself at the beginnings of yet another journey. 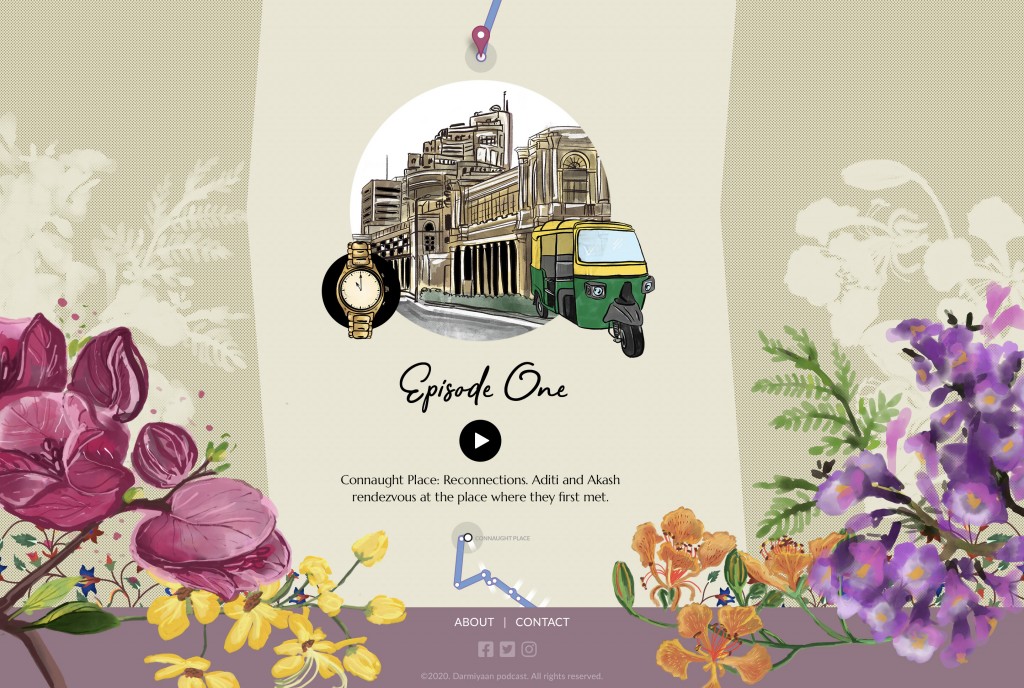 I am hoping I get to go on many other journeys – with Darmiyaan, and beyond. I hope you listen to it, and let me know what you think. Maybe you have a story to tell me.

You can listen to Darmiyaan on most podcast apps, or on the website itself.