At the end of a glum year overall, film enthusiasts finally have a reason to smile.

On the back of the global Coronavirus pandemic, the Sundance Film Festival officially announced the line-up of its first-ever virtual edition running from January 28th to February 3rd next year. Usually a ten-day festival across Utah’s Park City and Salt Lake City, Sundance 2021 will be only a week long, and will include 72 feature films and documentaries, 50 short films, 4 independent series and 14 tech-expanding projects in the New Frontier Section. The full program is available here.

More importantly, it’s big news for Indian cinema. Two Indian features will compete at Sundance 2021. Last year, there were none.

One of them is Ajitpal Singh’s debut feature, FIRE IN THE MOUNTAINS, which is the only Indian title to compete in the World Cinema Dramatic Competition section of ten films. According to the official press statement, the 82-minute intense family drama is about a mother who toils to save money to build a road in a remote Himalayan village to take her wheelchair-bound son for physiotherapy but her husband believes that a shamanic ritual (Jagar) is the remedy. The film stars Vinamrata Rai in the central role of the mother along with Chandan Bisht and Sonal Jha, introducing first-time young actors from Uttarakhand, Harshita Tewari and Mayank Singh Jaira. The Jar Pictures production, Fire In The Mountains is produced by Ajay Rai and Alan McAlex and co-produced by Amit Mehta and Mauli Singh. Ajitpal Singh’s short film Rammat-Gammat won ‘Special Mention’ at International Short Film Festival of Oberhausen 2018. 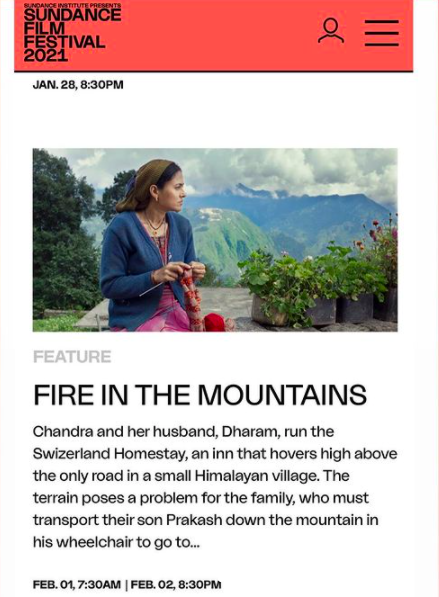 Also selected at Sundance 2021 is Rintu Thomas and Sushmit Ghosh’s WRITING WITH FIRE, the only Indian title in the World Cinema Documentary Competition section. The synopsis reads: “In one of the most socially oppressive and patriarchal states of India emerges a newspaper run entirely by rural women belonging to the Dalit or ‘untouchable’ community. Meera, its popular political reporter, decides to magnify the local paper’s impact with an audacious move – to transform from print to a digital news agency. Working in media dark villages, mocked and discouraged, this is the story of a visionary woman’s feisty spirit in building what will probably be the world’s first digital news agency run entirely by rural Dalit women.” 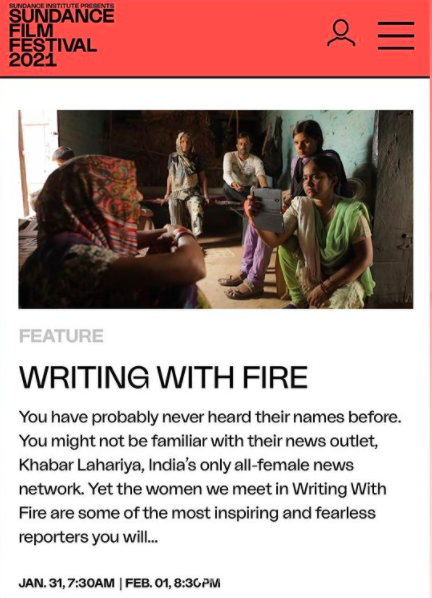