Hermione has been my muse for the last two years.

She is my pet dog.

She shares the co-writer credit on the screenplay of my new film, my fourth one – Nirmal Anand ki Puppy – which is complete and will be out next year. You might ask how can one share the writing credits with a Dog. But you know, I have never been a big fan of logic in real life. And to answer your question, no, she is not registered with the Film Writer’s Association. I would love to if they agree to have her in the union. I can arrange for a passport-sized photo too. But let’s be honest, at the end of the day, a writer is on his or her own – lonely, sitting somewhere fighting his own demons and figuring out a way on how to expose his/her innermost feelings. She is a good co-writer/ideator.

In the case of Nirmal Anand ki Puppy, she had me for company and we enjoyed collaborating in our own way. It is tough to explain in words the process, but what matters is the end result. I remember feeling extremely good when the news came in that Hermione and me had won the Best Screenwriting Award at the Washington DC Film Festival (DCSAFF). I informed her about it too, but being the cool dog that she is, I heard her say, “Relax, it’s not the Oscars or something right?”. I was super excited though, because we could possibly be the first Man-Dog writing combo in the world of films, I don’t know…

I also don’t know many other things.

For instance, how did this fourth film of mine get done?

Because very few independent filmmakers sustain themselves for this long in our industry, with most of them making the move to mainstream bigger films, or into the world of advertising commercials where there is good money. I understand why they don’t stick around. The independent scene is kind of weird. As for me, I really don’t have a clue as to why I am still here. The only thing that I can think of is that I really don’t know how to do anything else. So I am sticking to something that comes naturally to me – telling dramatic stories of urban Indians my way. Also it is quite possible that I need the medium of films more than films and the industry needs me! Most of the time, I notice that I am exploring ideas that are very close to my heart, themes and issues that I am unable to grasp clearly because they are way too subtle. So it is a need for me. You take this away from me, and I could possibly die. Ok, that is way too dramatic, but I will be lost for sure.

After the release of my previous film Shreelancer in 2017, I was super exhausted as only an independent filmmaker can be. Also I went into a strange phase where I was questioning whether I should stick to this path of filmmaking or do something else. I realised that when you make independent films, you are pretty much on your own. No one wants an independent voice to survive for too long. They want you to do one or two such films and then move into the mainstream to help them make some money. Anyway, I gave some serious thought of giving it all up. Also around this time, I noticed that the very few friends that I had in Mumbai were also drifting away from my life. All have their own reasons. So I was feeling more and more lonely. I am so focused on getting the film made that maybe I don’t make a good friend. Many days went by with me not uttering a word to anyone else except my family. Or maybe to the Starbucks girl when I ordered for “One short green tea”. I used to sit alone in cafes, watching people, wondering whether any one of these people will ever watch my films in the future at least. Strange phase.

It is around then that my daughter Amelie convinced us that she needs a pet dog. I don’t remember when I said Yes, but it seems I did. Since I had virtually no experience with pets, I was always wary of them. I was that kind of guy who would quietly make fun of people tailing behind their pet dogs carrying their poop. I used to feel superior to them. I never understood them. I used to think of these people as idiots who have too much time and money to spare.  But a few months with Hermione and I fell in love with her. She became my new muse. Suddenly I had a friend in this city apart from my family. A filmmaker like me needs a good friend. I am an introvert who needs to open up at times. I needed a friend with whom I can have a conversation with (monologues are also considered conversation in my dictionary). I started talking to her about many things including ideas that I had which I wanted to make into films. She used to lovingly look into my eyes, wag her tail at times, or at times ignore me and go back to sleep. I developed a method of my own by which if she looked long at me without closing her eyes or feeling sleepy, I would consider the idea as strong. If I am talking and she walks away or is shifty, then I would reconsider the idea. I had made a few more ways to communicate, with her tail coming in handy to understand her opinion. And no, I don’t smoke up nor am I an alcoholic if you are thinking I’ve lost it!

Spending time with her gave me a new perspective about life. I started to figure that we humans are way too preoccupied with our dreams, and stress about it too much. I loved this life of a dog. I really wanted to be dog-like (I am still trying). Thinking so much about life through the point of view of the dog gave me a germ of a story. Which eventually became Nirmal Anand ki Puppy. It is not a dog movie, but a movie created by a Dog and me. It is an urban relationship drama. 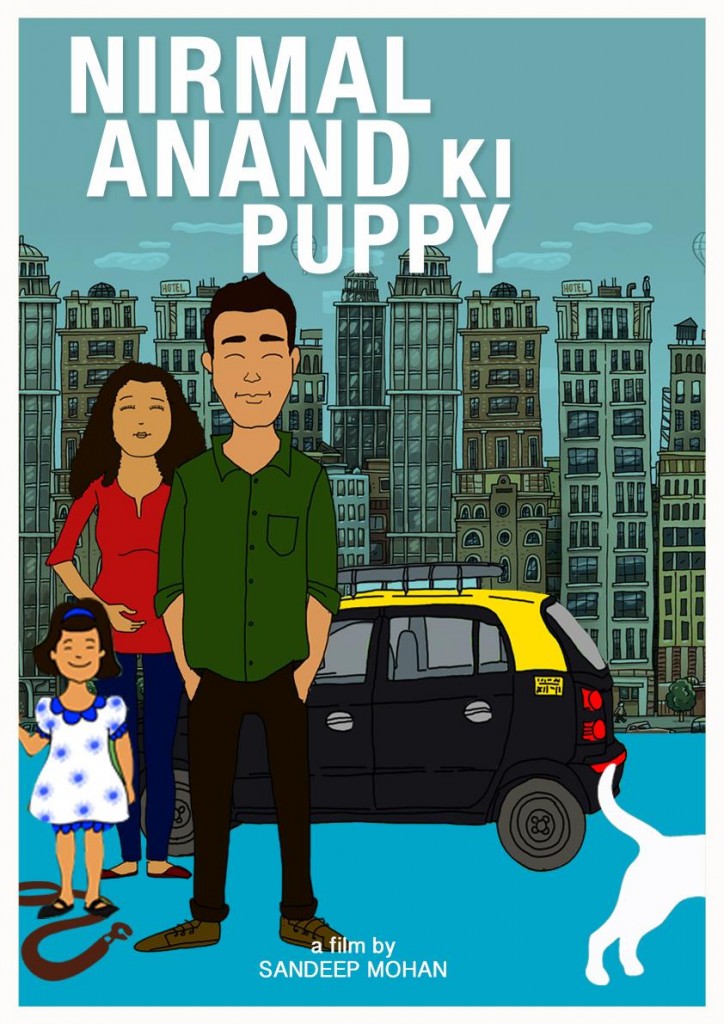 The actual writing process: the act of putting pen to paper was fast since it was clear in my head after countless discussions post midnight with Hermione, when all at home were asleep. As I say at home, “While the world sleeps, Sandeep Mohan is plotting with Hermione”!

As always, I write a film in such a way that I should be able to make the film even if no one finances it.  With the script done, I hunted around, and luckily got 3 to 4 investors interested, and I put together the project, got the film done fast. It was shot entirely in Mumbai – so this becomes my first film that I shot entirely in Mumbai. The three previous films of mine were shot in Goa, San Jose and then Bangalore/Manali.

Nirmal Anand ki Puppy was shot in 21 days and I cast some wonderful actors: Karanveer Khullar, Gillian Pinto, Khushboo Upadhyaya, Salmin Sheriff and many others. I am so glad to have had a wonderful crew too who understood what I am attempting. I am glad with the way the film has turned out and I cannot thank Hermione and the rest of the folks for trusting me wholeheartedly. Making a film and getting it sold is a tedious process, but there is a joy in it too. I try to keep myself excited as much as possible during this process. 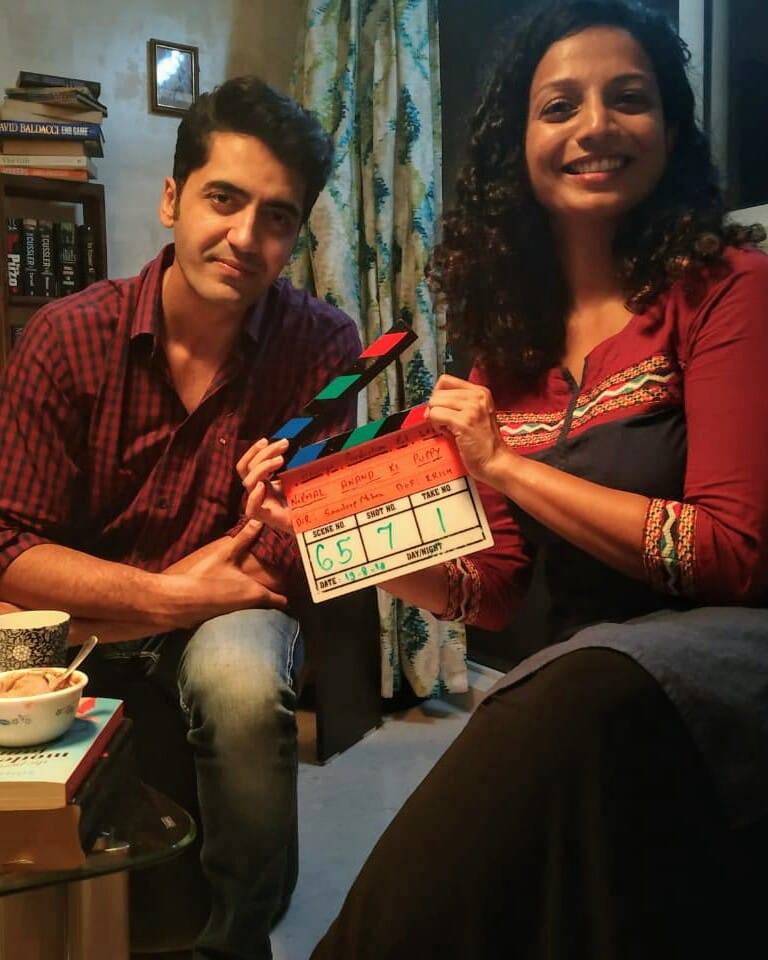 As for the future, I don’t know whether I get to make one more film my way, but I have ideas. So I don’t know. I do get told to scale up, cast big actors and move up the filmmaking ladder. Honestly speaking, it definitely is a temptation. But then I look at Hermione and her relaxed approach to life. She is very clear about her priorities. She just wants to be happy doing what she likes – eat, walk, run around, sleep, bark at times (the equivalent of Facebook posts for humans), and a few other basic things. For me to work with big actors or scale up, they will have to work according to my terms. Which I am sure is not possible because I am no big-shot filmmaker. Yes, I can give them a good film: a film that they will be proud about when they are about to die, but then that is not how the system operates. I understand that. Also I don’t have the patience to raise that kind of money to afford them and their tantrums. I also have the apprehension that the energy and the momentum that I build up within myself while writing the script will dissipate if I take too long to make the film. I am totally an energy guy. I safeguard my energy and try to concentrate my entire being towards getting things done.

So in short, I love being independent.

I just want to be happy doing what I like.

Sometimes a dog can teach a human on how to proceed with his life.

So thank you Hermione, my muse. Thanks for coming into our life.

Nirmal Anand ki Puppy will release in 2020 and the trailer is already out.