The poetic solitude of Antaheen

A red kite is stuck in an antenna outside a house. It is trying to escape but it cannot. If it goes away, Brinda (Radhika Apte) will miss it, says Abhik (Rahul Bose). Aniruddha Roy Chowdhury’s Antaheen is the story of people who are stuck. Unable to move on. Unable to let go. Unable to relinquish their past. The Mehras (Shauvik Kundagrami and Mita Vashisht) are stuck in a marriage burdened by the ghost of their daughter’s death. They are together but not really together. Paro (Aparna Sen) and Ronno (Kalyan Ray) are separated but not officially divorced. They are still dependent on each other even though they live apart. Ronno narrates the story of the captain of a sinking ship who is so much in love with the ship that he would rather sink with it instead of escaping it. Like the captain, Ronno is also unable to leave Kolkata after his separation because love to him is like a sinking ship. Likewise, Paro is also unable to decide if she wants to leave Kolkata and move to Mumbai and compares her state of indecisiveness to living in exile. She is in two minds and struggling to escape the city. Like the red kite. Like the captain of the ship. Like Constantine Cavafy whose poem The City Ronno quotes where the poet talks about his beloved city which he cannot escape as it haunts him wherever he goes.

You tell yourself: I’ll be gone,
To some other land, some other sea,
To a city lovelier far than this,
Could ever have been or hoped to be. 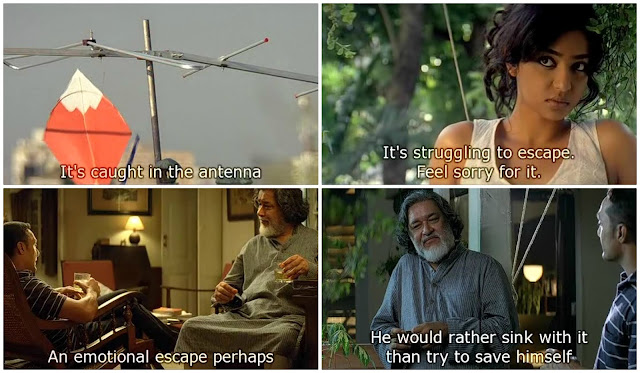 Antaheen is made from two words—ant (end) and aheen (abundance). It stands for an endless wait. Like its title, the denizens of Antaheen are not only stuck but also living in a state of perpetual waiting. Pishi (Sharmila Tagore) remembers someone special from her past with whom she had shared an emotional connection that started through a wrong number. The stranger called her every day on the phone. A bond developed between them but somehow they never wanted to meet each other in person. One fine morning, his calls suddenly stopped. She kept waiting but the call never came and till today, in her heart, she is waiting for the call to come as she has not been able to move on. Life comes a full circle when something similar happens to Abhik. The daily phone call in Pishi’s story is replaced by the daily online chat in his story. Abhik develops an emotional connection over an internet chat room with a stranger Brinda where they share the most intimate details of their life. They have met in real life but are unaware of the other’s online identity. When the truth about Brinda is in the vicinity, life decides to move them even further apart, putting them in different worlds. Like his Pishi, Abhik is waiting and hoping against hope for the ping to come again but knows it will never come. While Pishi talks on phones and Abhi chats online, Paro uses books to deliver her messages. Like the others, she is also waiting for Ronno to call her back in his life, waiting for him to tell her to not go to Mumbai, waiting for him to convey that she is needed. People at different stages of life—old, middle, and young—are bound by the strand of antaheen—the endless wait. 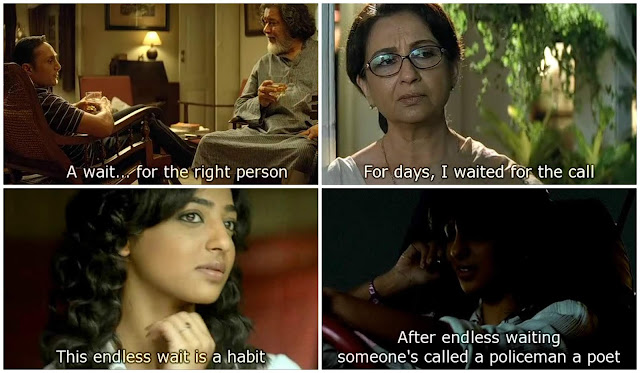 On Ronno’s birthday, Paro gifts him Rumi’s Bridge To The Soul and quotes a passage from the same book, “The closer you get, the more you become elusive, the further you go, the clearer you become.” This succinctly summarizes another aspect of the film. Distance brings clarity while closeness leads to obscurity. When people are together, their relationship falls apart. All the couples in the film spend time away from each other. The only couple, the Mehras, who stay together is not happy. Perhaps, the state of the Mehras is what the state of Paro and Ronno were when they were together. Love and adoration for the other have not dissipated from their life. Bitterness and animosity have not fully crept in for the other. Like Mr. Mehra asks the domestic help to give medicine for migraine to his wife even if they have problems in marriage. Ronno and Paro share a relationship where they are both married and unmarried at the same time. Later, Paro remarks, “Distance matters. Sometimes absence is required to feel a person’s presence more intensely.” At another stage, Abhik breaks a glass to which Brinda replies that things and relationships often break when they are together again underscoring the sanctity of distance in relationships. The closeness is some kind of a mirage, perhaps, that is why the film has umpteen shots of character reflections. And, this is why Brinda’s death did not come as a surprise to me because the film warned us about it by its philosophy. 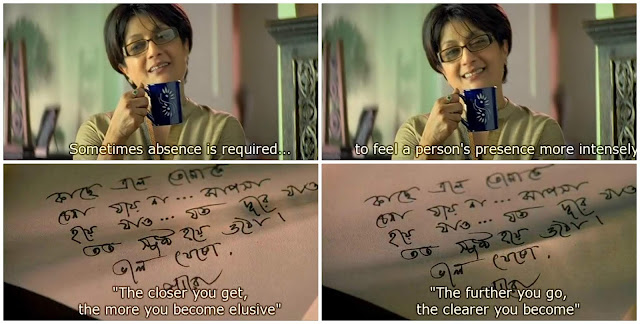 Antaheen stresses on the unsaid and the unspoken in relationships. All things do not need to be explicitly told. People can communicate without words. This is also seen in another Rumi poem Music and Silence from Bridge To The Soul which is written on the mirror in Brinda’s home.

Music begins.
Your silence deepens that.
Were you to put words with this

We would not survive the song. 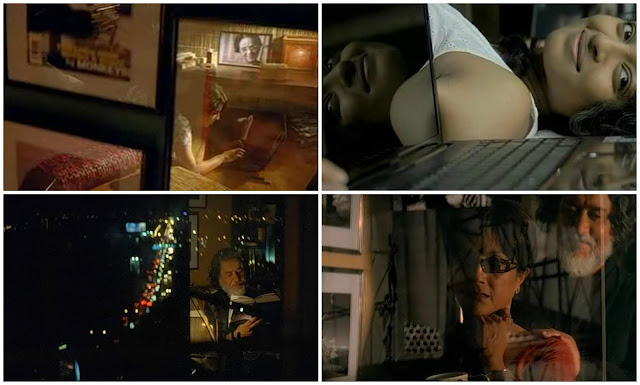 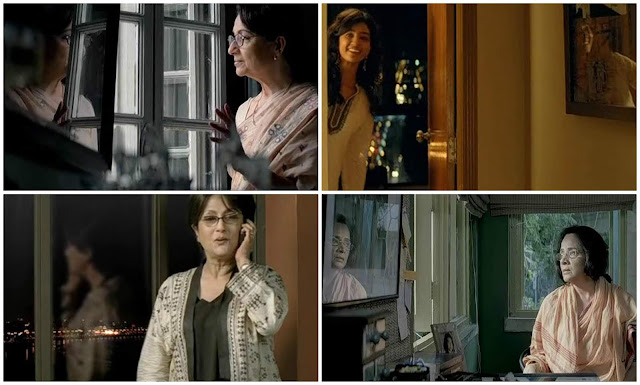 The film does not make any grand claims on the idealism of relationships. It says that no one really knows what they want in life. It argues that there is no such thing as a perfect relationship. Throughout its length, the characters discuss the same. At one point, Paro quotes poet Sunil Ganguly’s line that there is no ideal job in the world. Likewise, there are no ideal relationships. Later, Brinda also questions if there is something like a perfect relationship. What perhaps is needed is letting go of ego and trying a bit of compromise to make them perfect. Antaheen understands the complexity of human relationships. We are often in two minds about the things we want. It has the maturity to understand that love and marriage are separate things. One can love someone without the need of getting married. For marriage, one has to feel a bit needed. 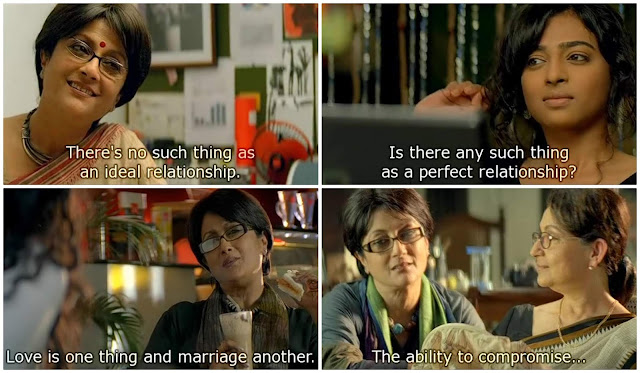 In Ritesh Batra’s The Lunchbox, serendipity leads to an epistolary romance between two strangers. The people in the film were bathed in the feeling of devastating loneliness. In Antaheen, too, the characters develop a romance with strangers and are also dealing with loneliness but by choice, also known by solitude. The people of this film are loners. They have reached a certain comfort with being alone. Pishi tells Abhik that she is ‘deprived’ by her choice. Paro calls her husband ‘Sensex Sadhu‘ as in his life, he only needs three things—stocks, alcohol, and books. There are also many scenes in the film where people eat and drink by themselves in the film. Antaheen also tries to connect the people by putting them in similar situations. They also have similar thoughts about issues at different stages. At some point, Paro mentions that Ronno blamed her for his father’s death, just like Mrs. Mehra blames her husband for their daughter’s death. Later, Mr. Mehra tells Brinda that she would have been just like his daughter when she came to interview him. What happened to Pishi happens to Abhik as well. 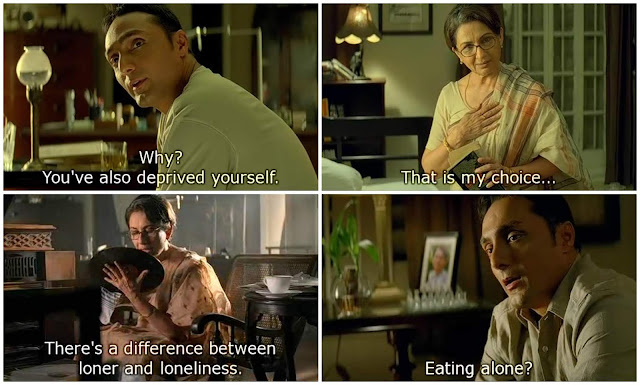 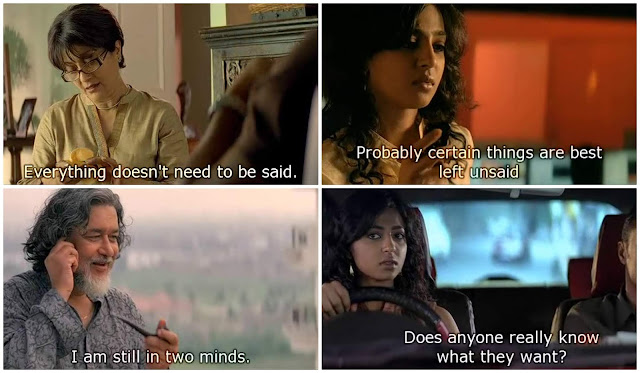 Even though they are separated, Ronno still reaches out to Paro when he cannot find his personal items. At one point, he calls her as he could not find his raincoat. It reminded me of Rituparno Ghosh’s Raincoat, another lovely tale of biraah where the separated lovers reminisce about each other. Biraha ke aansoon kab ke, ho kab ke ponch daali phir kaahe dard jagaao. I was also reminded of Karan Johar’s Kabhi Alvida Naa Kehna and Revathy’s Mitr My Friend during the scenes where Brinda and Abhik talk about sharing a comfort level with strangers. 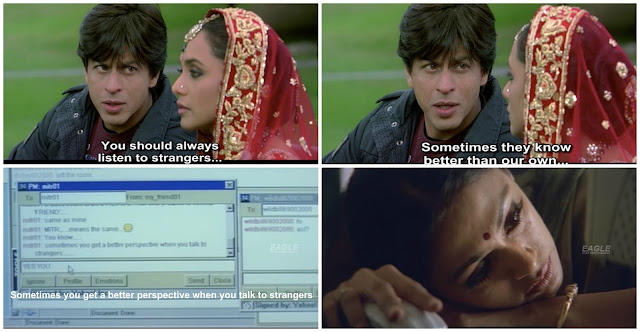 The film is brimming with beautiful images of raindrops on leaves, and the mist on the glass panes. There is also a special focus on telephones and cellphones. Pherari Mon also mentions telephones. Beje gechhe kakhon, se telephone. Even though I relied on subtitles for the lyrics, the songs are just lovely. There is a certain dignity, or as Paro says, graceful composure, about the film. The performances are heartfelt. 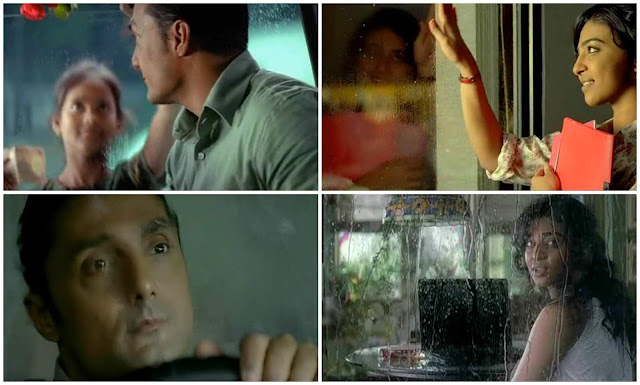 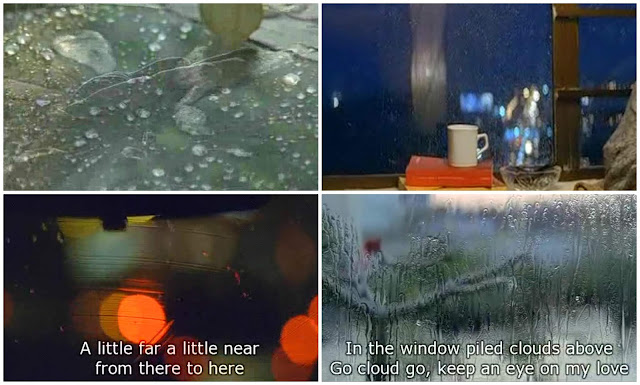 Rain on glass panes in Antaheen

Early in Antaheen, Abhik arrests a man who wanted to shoot his brother as he separated him from his girlfriend. Love makes people do crazy things, says Pishi. Some take to the gun, some take to the bottle like Devdas, and in today’s world, some take to the internet to escape. In the online world, Abhik becomes ‘Boy In The Box’ and chats with Brinda who is ‘Raat Jaaga Tara’. The real life mimics their online life and like her name, Brinda becomes a night star after her death in another far world, leaving behind a mournful Abhik, stuck in a box of her memories. All he can do is call out to his raat jaaga tara and plead her to turn into sleep in his eyes on his nights of depression. Ghum hoye jao choke, amar mon kharaper rat e.