Judgementall Hai Kya: Can Sita save herself?

Prakash Kovelamudi’s Judgementall Hai Kya is a dark thriller film about individuals with mental health issues. The film is the story of the eccentric Bobby (Kangana Ranaut) who develops a condition of acute psychosis after undergoing trauma related to her parents’ death in her childhood. She works as a dubbing artist and vicariously lives the life of her characters. She rents her apartment to Keshav (Rajkummar Rao) and his wife Reema (Amyra Dastur). Circumstances lead to Reema’s death where Bobby believes Keshav is the murderer but no one believes her because she is bawli. The action then shifts to London where Bobby again runs into Keshav who is also not what he claims to be. Written by Kanika Dhillon, the film also cleverly incorporates themes of domestic abuse, Me Too, mental health, and Ramayana. Initially, called Mental Hai Kya, the film’s title was changed to Judgementall Hai Kya because of objections from the Indian Psychiatric Society (IPS) which filed a complaint to the Central Board of Film Certification (CBFC) claiming that the title is insensitive to patients with mental illnesses.

Early in the film, a young Bobby sits in front of a split mirror displaying three images on the screen. Later, the same scene is repeated with Bobby often found near mirrors giving an impression of multiple identities. This leitmotif is seen in various aspects of Bobby’s life. She is the daughter of parents who belong to different religions. As her name Bobby Batliwala Grewal suggests, she is half-Parsi and half-Punjabi. She prays to both Guru Nanak and Ahura Mazda. In her professional life, she works as a dubbing artist for films and imagines herself to be the characters for whom she lends her voice. She suffers from a dissociative identity disorder, which was previously known as multiple personality disorder. She has multiple characters living in her conscience who talk to her in different situations. The film ends with Bobby walking with these colorful characters. There is the blurring of lines between reality and fiction for Bobby. The film further blurs the lines between the two by introducing meta themes from Kangana’s real and reel life. Bobby’s house is full of pictures from Kangana’s previous films, such as Tanu Weds Manu, and Queen. The lyrics of Para Para say, “Yeh queen shaitani.” At some point, Bobby enacts the role of Rowdy Rani which sounds similar to Kangana’s Revolver Rani. At another stage, Bobby talks about nepotism and exposing people; issues which Kangana has often spoken in the past and continues to speak about them. 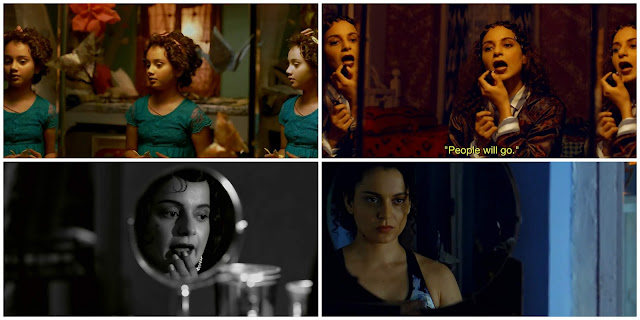 While Bobby was living with the multiple characters, there is Shravan, who as is eventually revealed suffers from the same disorder, and goes a step further than her where he actually plays those characters in his life. He takes identities of not just Keshav and Shravan but also Yusuf, Aakash, Adheer, Priyanshu, and John. Like her, Shravan is also seen near mirrors. In the end, he is also shown standing in front of a split mirror with ten images suggesting that he is a bigger psychotic than Bobby. Shravan’s multiplicity is seen in some little moments as well. When Bobby visits his factory, the tone and the accent of the way he speaks with his workers is noticeably different from the way he spoke to Bobby.

Judgementall Hai Kya presents both Bobby and Keshav as unreliable narrators. Bobby’s acute psychosis makes her a candidate where people do not believe her stories. In addition, Bobby often narrates some stories from her past and then dismisses them as a joke. Even in the case of Shravan, his unreliability was established quite early in the film. He is seen smoking and eating non-vegetarian food, both of which he had mentioned that he does not indulge in life. Later, Bobby searches his items, there are cassettes with names of different people in the desk which again pointed out that something was not right. However, there is a scene in the second half where the tattoo on his arm is visible which reads Aham Brahmasmi, made popular by Sacred Games, which kind of confirmed the twist that was coming. These are the same words that Shravan speaks in the end when he reveals his truth.

Just like its characters, even the film takes an altogether new identity in the second half where it moves to London. Bobby visits her cousin Megha (Amrita Puri) and is asked to play the role of Sita in a futuristic Ramayana play with a stunningly designed set. Sita fell into Raavan’s trap and was abducted by him. After she returns, she had to pass through the agni pariksha to prove her chastity. Like Sita, Bobby is trapped in the web of lies of Keshav where no one believes what she says. There are no people like Ram or Hanuman who will come to rescue her. The ones that are there exist only in Bobby’s head. Thus, she has to save herself. In the final moments, Bobby dresses up as Sita while Keshav stands in front of a mirror with ten images reinforcing that he is the ten-faced Raavan. Sita eventually triumphs over Raavan where Keshav is killed and Bobby was proven right.

Judgementall Hai Kya is filled with a lot many quirks that are actually funny and creative. The film has one of the most beautiful opening credits using the art form of origami with newspaper cuttings. Bobby has a black cat named Panauti meaning bad luck because black cats are often associated with bad luck (sorry for explaining the joke). The shirts that are worn by Bobby’s boyfriend Varun (Hussain Dalal) have hilarious captions. At some point, Keshav jokes with Megha that Bobby is Surpanakha (whose nose was cut off), but early in the film, it is Bobby (unlike Surpanakha) who cuts off her producer’s nose for touching her without consent. If Bobby sees a cockroach, Shravan owns a pesticide company (that kills cockroaches). The film starts with Bobby doing Yoga where she sees the world upside down again adding to her eccentricities. There are frequent conversations in the film about fuse udna because mentally-challenged people are often (insensitively) referred to as those with uda hua fuse. The film starts at Holi in a riot of colors but there are also crackers bursting as it happens on Diwali in the background when her parents fall to their death. The film symbolically ends at Diwali (or Dussehra) but those events also happen among a riot of colors. The scenes in London are shot at places with stunning and colorful graffiti as if the locations mirror the psychedelic themes of the film. In the London scenes when Bobby walks along with Ram, Hanuman, and Jatayu, the film is almost reminiscent of Alejandro G. Iñárritu’s Birdman or (The Unexpected Virtue Of Ignorance).

The film has an absolutely stunning art direction and there are two discernible themes related to the same. First is the presence of animal motifs in the film. In addition to the cockroach, there are a lot of other animal figures shown in different places quite imaginatively. Some of these include cat crafts, frog statues, and monkey figures at Bobby’s home. At some other place, Bobby is sitting near a penguin-shaped dumpster. There are also animal-like figures on costumes. The film’s posters also show Bobby and Keshav with a cat and a mouse, respectively, underscoring the cat-and-mouse game between the two characters. 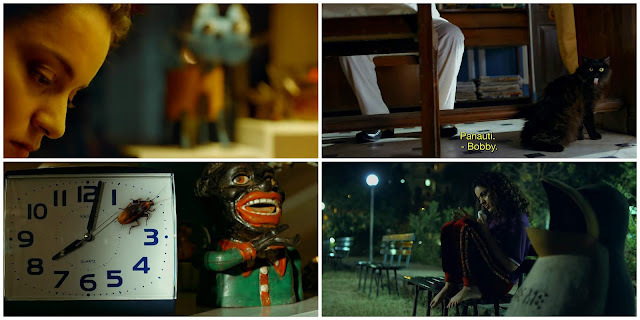 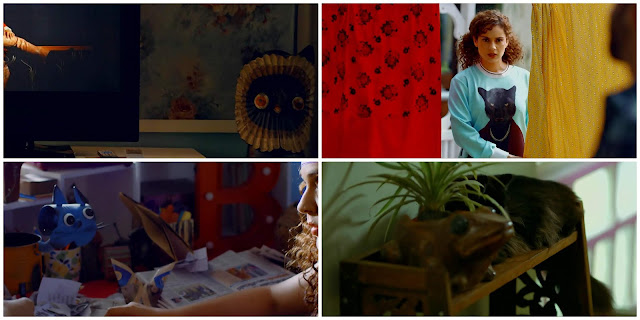 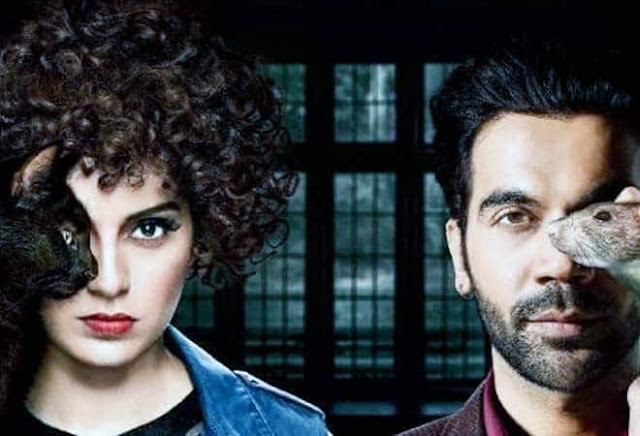 The second noticeable art theme in the film is its color palette. The scenes in the film are shot in mélange of bright colors, such as red, blue, yellow, and green. As we saw in Thiagarajan Kumararaja’s Super Deluxe where the entire film was painted in three primary colors—red, blue, and green; in Judgementall Hai Kya, there is a focus on primarily red and blue. I lost the count of the scenes where something or the other was shown in these two colors. It is definitely visible if one looks closely. I am not sure what it represents. It could be another representation of the film’s psychedelic themes given that these colors form the ends of a spectrum. The following images show some of the red and blue combinations in the films. The lights are also added in these colors.

There is also Satish Kaushik who plays the investigating cop. He is always eating snacks. What struck me was that he has a striking resemblance to Shammi Narang who was the news anchor on Doordarshan. Also, his character is always munching snacks, something we also saw in Abhay Chopra’s Ittefaq where the investigating officer Dev (Akshaye Khanna) and other policemen kept eating something throughout the film. Actually, the interrogation scenes in Judgementall Hai Kya reminded of similar scenes in Ittefaq as both films present its protagonists as unreliable narrators where also the man turns out to be culprit while the woman was suspected initially, like here. 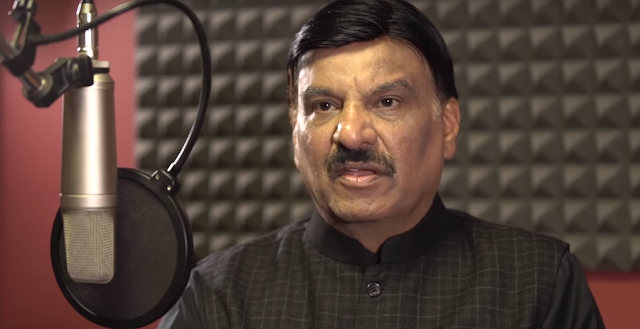 In Imtiaz Ali’s Tamasha, Ved became a mechanical robot displaying traits of bipolar disorder. He is saved from falling into the throes of insanity by Tara who helps him find his dil ki aawaaz which he had lost. In Judgementall Hai Kya, Bobby also often talks another aawaaz—pet ki aawaaz. Sridhar (Jimmy Shergill) asks her that he has heard about dil ki aawaaz but he does not know about pet ki aawaaz. Bobby replies, “Jab koi haadsa hone vala hota hai, dil silent rehta hai, aur pet se aawaaz aati hai.” When it is about survival, and everything else is silent, it is our own gut that comes to our rescue. Because if we do not save ourselves, who will?