Nearly six years after The Lunchbox released, Ritesh Batra turns letters into pictures in his second Hindi film Photograph. The film is the story of a quiet Miloni (Sanya Malhotra), who as her name also suggests, is an academic achiever studying to become a Chartered Accountant in Mumbai. On a trip to the Gateway of India, she meets a photographer Rafi (Nawazuddin Siddiqui) who asks her to get a photograph clicked as years later, it will remind her of the sun in her face and the wind in her hair. Circumstances lead to a situation where Rafi asks Miloni to pretend to be his girlfriend for the days his grandmother (Farrukh Jaffar) is in town. She agrees and an unlikely bond develops between them.

Miloni and Rafi belong to different backgrounds yet they are similar in some ways. They both are living their lives for others. They are obedient pliable people who have followed whatever has been told to them. Miloni always acquiesces to her parent’s choices. She wears what her family thinks looks good on her. When she is asked about her favourite color, she is unable to answer. Rafi, too, is living for his family. He is working hard to pay the debt of his house in his village. He was the one who bore all the expenses of his sisters’ wedding. He cannot say no to his grandmother’s wishes. At the post office when he sends the money order, the lady at the counter also advises him to sometimes keep some money for himself instead of sending it all away. Apne liye bhi rakha karo, Rafi Bhai. In a wonderful scene, while chatting with his friends, he says he told his grandmother, “Dekh Daadi,” after which his friend starts mocking his assertiveness and then Rafi corrects that he said, “Dekhiye Daadi.” Dekh becomes dekhiye. Even in her absence, he feels shy about being authoritative. When he finishes his letter, he signs it off as ‘aapka accha vala bachcha‘. At one stage, he even tells his grandmother that he has to go pee when he is at the restaurant. He does do anything without telling her.

Miloni and Rafi’s obedience, perhaps, will soon turn into rebellion if they took their relationship to the next level. They belong to different religions and social classes. She is a Hindu. He is a Muslim. She belongs to an upper-class family. He is struggling to make ends meet. Like it happened in the films of the seventies and the eighties, their differences will eventually give rise to opposition from their family members. People already taunt Rafi and make offensive comments for choosing a girl who is different from him in every way. He is a gulab jamun while she is a rasgulla. Photograph does not show us their future and it cleverly ends with Miloni and Rafi chatting outside a cinema hall when they go for a movie. Rafi says that the stories of all the movies are usually the same; their life will soon turn into a movie as well, but the film is primarily focused on building their unlikely relationship.

One interesting thing that is clearly visible throughout the film is the repeated focus on the feet shot of the characters. This is most evident in the case of Miloni. Whenever she seems to be nervous, there are shots of her twitching her feet. It is hard to discern the exact meaning of these feet shots; it can be only be conjectured. As Miloni does not articulate her thoughts and prefers to be silent, the film uses these feet shots to indicate her nervous state. When she is watching a film with Rafi, a rat jumps across her feet making her squirm. When she speaks to Rampyaari (Geetanjali Kulkarni), Miloni asks about her payal as she also got a pair from Rafi’s grandmother. 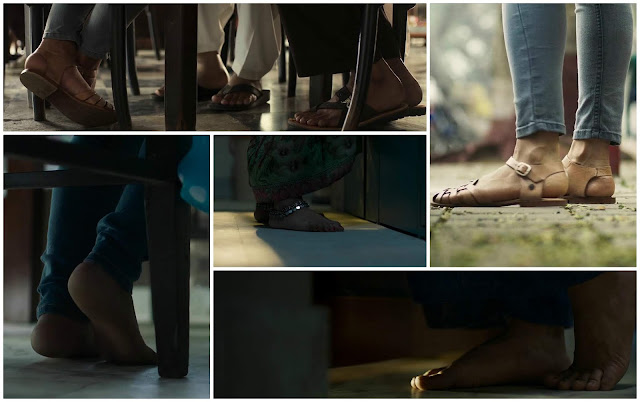 The world of Photograph is not different from the one in The Lunchbox. To start with, the title of the two films is in English. Old-school elements, such as letters and pictures, form the crux of the stories in them. The two films are uniquely Bombay films. Loneliness is a supporting character of its own in the two films. Chance encounters lead to unlikely friendships and undefined relationships in both of them. An accidental delivery of a lunchbox leads to an epistolary romance between Ila (Nimrat Kaur) and Saajan (Irrfan Khan) in The Lunchbox. Kabhi kabhi galat train bhi sahi jagah pahuncha deti hai. A chance encounter at the Gateway of India leads to a pictorial romance between Rafi and Miloni. 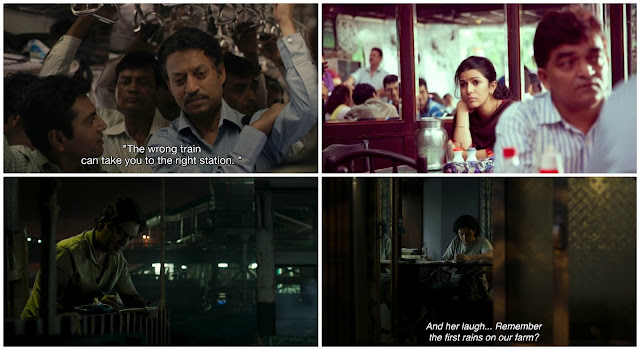 In terms of film style as well, Ritesh Batra uses similar tropes as he did in his first film. The Lunchbox opens with a shot of two trains running in opposite directions. Photograph opens with a shot of traffic going in opposite directions. In The Lunchbox, there was Deshpande Aunty whom we never get to see but only get to hear her voice. There was Ila’s father whose body we only get to see from the outside. In Photograph, Rafi sends a money order from the post office and there is only the voice of the lady that can be heard. She knows him well but we do not get to see her. The lady in the bus who asks Miloni if she is on the billboard is again an invisible face. When Miloni’s teacher is introduced, his face is shown only when the scene is about to end. During the scene where a potential suitor’s parents come to see Miloni, the faces of all people are blurred except that of Miloni. There is more a focus on voices rather than faces. 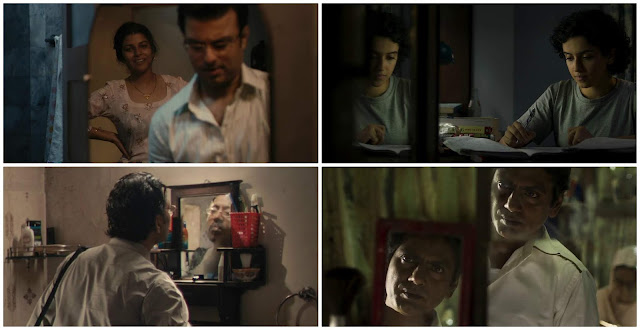 In The Lunchbox, Ila writes that Deshpande Uncle kept looking at the fan all day long as he believed that his life was in it. Deshpande Aunty purchased an inverter to make sure the fan never stopped running. The sight and the sounds of the ceiling fan are present throughout Photograph as well. Scenes are shot from the perspective of the fan. Tiwari Ji committed suicide by hanging himself on the fan. 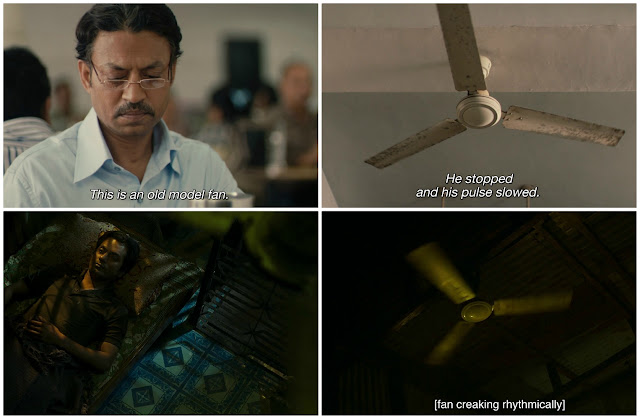 In The Lunchbox, Saajan writes that he spent his whole life standing in trains and buses, and he will have to stand even when he is dead as there are no horizontal burial plots left and only vertical burial plots are being offered. There is no rest even after one leaves the world. This finds resonance in Photograph where Rafi’s friend Zakir (Saharsh Kumar Shukla) comments about Tiwari Ji, “Latak ke bhi chain nahi milta Mumbai mein.” No one gets peace in Mumbai, not even in death. The door of Rafi’s house opens upwards making it feel like he is living in a box. A woman jumps along with her daughter and commits suicide in The Lunchbox; Tiwari Ji also hangs himself and dies in Photograph. Some other sequences, such as making of roti/papad, and mirror scenes are also present in both the films. Delicious mouth-watering food also makes its presence in the two films. 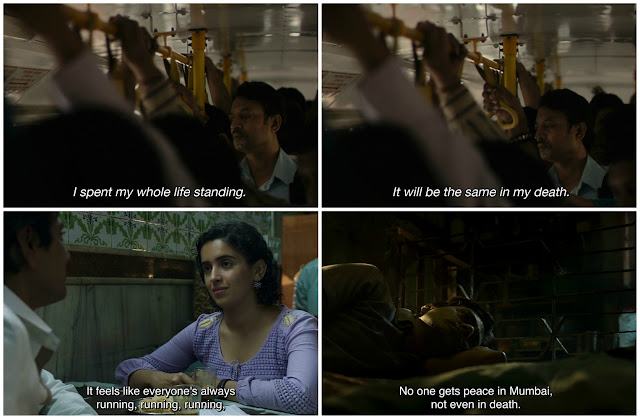 The search for a utopian land continues in Photograph where Ila’s desire to move to Bhutan is mirrored in Miloni’s desire to live in a village. The quest to find the elusive inner peace by living in Bhutan due to its adoption of Gross National Happiness is similar to the thrill of farming in the villages. Miloni connected more with people who came from villages, whether it was Rampyaari or Rafi. 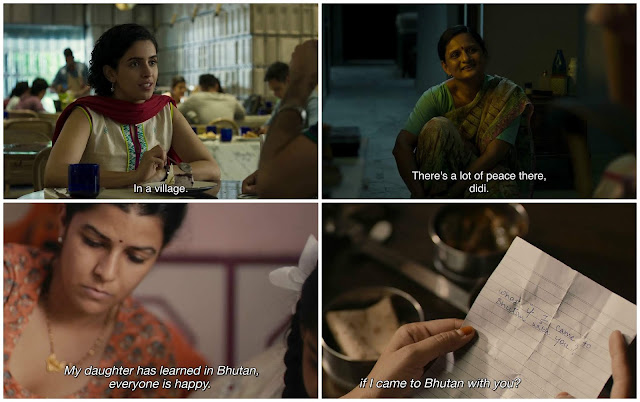 Hindi film music also plays its integral part in both films. The Lunchbox‘s protagonist is named Saajan evoking memories of the movie Saajan (1991) which also had two characters Pooja (Madhuri Dixit) and Sagar (Sanjay Dutt) communicating through letters most of the time. At one stage, Ila is also listening to Mera Dil Bhi Kitna Pagal Hai from Saajan. In another scene, the young boys in the train sing Pardesi Pardesi Jana Nahi from Raja Hindustani (1996). Likewise, Photograph‘s protagonist is named Rafi after the legendary singer Mohammed Rafi. His song Tumne Mujhe Dekha from Teesri Manzil (1966) plays during the scenes of longing between the two characters. Rafi writes a letter to his grandmother where he mentions that the name of his (imaginary) girlfriend is Noorie which comes to him when he is listening to the song Aaja Re O Mere Dilbar from Noorie (1979).

Recently, noted film critic Baradwaj Rangan wrote a thoughtful article on the importance of exposition behind the narrative events in screenplays. He says that the audience cannot be expected to answer ‘Why?’ by extrapolation, especially, in mainstream films. While Photograph‘s aesthetic is different, the issue with the film is that a lot of stuff happens behind the scenes. The film neither shows us a crucial event nor does it give an explanation for some changes. Events, such as Rafi’s grandmother coming to visit him or the confrontation between Miloni’s teacher and Rafi, are also shown ex post facto. For instance, Miloni agrees to play Rafi’s girlfriend but the film never explains her reasons for the same. Miloni’s character is inert at places which makes it difficult to read her motivations. It is as if the extremely quiet daughter of Ila from The Lunchbox who hardly spoke one or two words grew up to become Miloni.

The film’s pace is, at times, languorous. Scenes have a long take. There is roughly a minute-long shot of Miloni when she is sitting on a ferry. Some of her scenes with the maid are repeated. Yet, there is some poignant calmness about the film. One can feel the loneliness of the characters. The bond between Miloni and Rampyaari is beautiful. I heard the name Rampyaari after really long, which is also my late grandmother’s name giving me a moment of nostalgia as well to remember her. The performances are splendid with Farrukh Jaffar in terrific form.

As recency plays a strong role in memory, I was also reminded of Zoya Akhtar’s Gully Boy at places while watching Photograph. The two films show Bombay quite differently. Gully Boy has an intrusive gaze towards Murad’s house in the slums, while Photographshows the same with a certain restraint. Characters of Safeena (Alia Bhatt) and Miloni can also be contrasted. Safeena’s desires were repressed by her overbearing parents that led to her using violence to channel her aggression; Miloni is also feeling suppressed but it is not clear as to what is causing her to retreat into a shell. The love story of Murad and Safeena was somewhere in the middle; their future is uncertain. They will go onto face objection soon. Likewise, the story of Miloni and Rafi ends somewhere in the middle where their future is unclear. They will also have to face challenges ahead. Similar small scenes also are present in the two films. There is a scene in Gully Boy where Safeena is waiting at the bus stop; a similar scene is seen in Photograph where Miloni is waiting at the bus stop. 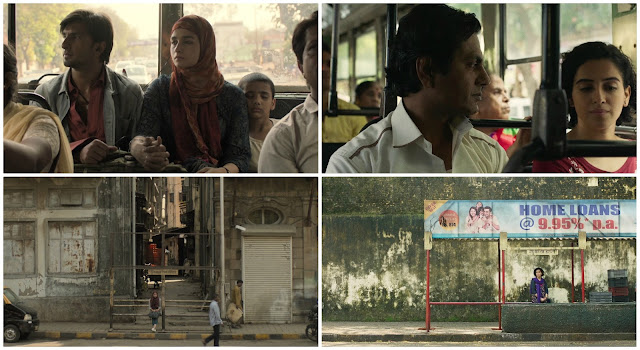 Nostalgia drips in almost every frame in Ritesh Batra’s films. The Lunchbox depicted old TV shows, such as Yeh Jo Hai Zindagi, video cassettes, radio shows, and letters. Photograph shows Campa Cola, softies, kulfi, ice gola, kaali-peeli taxis, money orders, and post offices. “I think we forget things if we have no one to tell them to,” the wise Saajan had written to Ila after taking a trip in an autorickshaw that passed through the alley where he grew up as a child. Perhaps, this explains why Ritesh Batra incorporates these nostalgic elements in his films. And, in the process, takes us all on a path where we also relive our childhood days along with him. After all, nostalgia feels even sweeter if there is someone to reminisce and recollect the photographs of time that is not going to come back again.