Chalchitra Talks: The voice of movies

Back in 2015, while I was doing an internship in Mumbai, someone at a party told me that I looked like Steve Carell. And I replied, “who is Steve Carell?”. The whole room went silent. Everyone turned towards me. Time stopped. “You don’t know who Steve Carell is?”. It’s like I had just insulted the spirit of Versova. I tried to keep a smiling face but I knew that the damage had already been done. This singular event gave me a much needed reality check. I was planning to shift to Mumbai in a year, but I did not know the very language those people spoke – the language of cinema. Sure, I had seen all the mandatory Christopher Nolan and Anurag Kashyap films, but that wasn’t enough.

So when my summer internship got over, I decided to learn this new language by watching one film every day. At first, this process started out of fear. But then, as I watched more and more movies, I started liking the very act of watching movies itself. The curiosity had a compounding effect and it just made me even more curious. After 6 months, when I went back to Mumbai, I was a little more wiser. I could participate in conversations. I had opinions of my own. And I felt a little less ignorant.

By the end of the same year, I had discovered the cinema of Richard Linklater. It was more or less a life-altering experience. And he became the focal point for the rest of my film education. I watched all his films. I watched the films of people who inspired him, and their inspirations too. I started maintaining a film diary in which I wrote down the names of films I watched every month.

After moving to Mumbai in August 2016, I started posting the monthly lists from my film diary online, something which the American filmmaker Danny Sangra inspired me to do. And by mid-2018, I realised that I had watched some 1000 movies in the last three years alone. And just a few months later, I decided to start recommending my favourite films on Youtube under the banner – Chalchitra Talks. 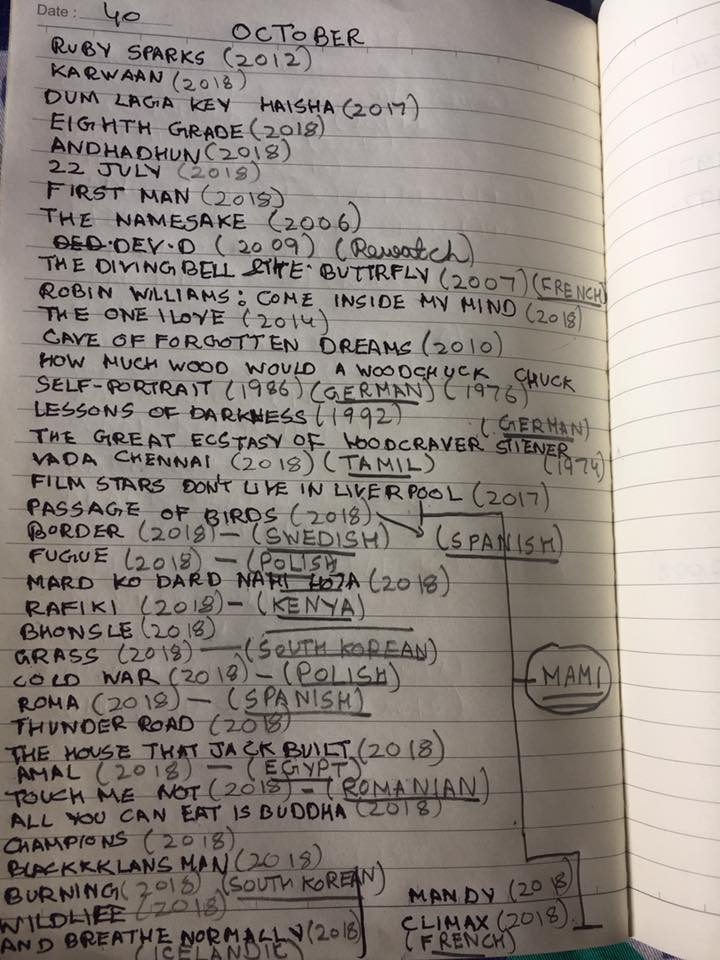 I always wanted to be certain that Chalchitra Talks never feels like work. And for the same reason, I have kept the format of these episodes at their simplest. I shoot this at my home, where we use an iPhone for recording sound, Canon 600d for video, and a table lamp and a laptop for lighting up the face. And once the camera rolls, it’s all about recommendations. I never even introduce myself. I directly give a recommendation, talk about why I liked it, what I liked the most, and I then move to the next recommendation. Mostly these are recommendations from world cinema. I try not to talk about Bollywood films because my knowledge of Indian cinema is still not very polished.

Chalchitra Talks is about to cross 10,000 subscribers on Youtube any day now. I have been consistently releasing these episodes since October 2018 and have already made 30 episodes. I also invite guests from the film industry to give their recommendations from time to time. This channel is getting much more engagement than any of my short films ever did.

Now I have never been very comfortable with my own voice. But after a few episodes, it stopped affecting me. It’s interesting how people start paying more attention to everything once you have an audience. They start appreciating even those small idiosyncrasies which they once did not like. A few days back my dad called me and said that he was reading some of the comments on Youtube and suggested that I should keep longer hair because my ‘audience’ liked that more. It was so hilarious because he was actually being serious. I wish I could have recorded his words because it made me reminisce about all the arguments we used to have when I had longer hair during my college days.

I think there are many filmmakers who like to talk about what inspires them. For a short span, when Damien Chazelle was active on Twitter, he used to recommend some lesser known film every day on Twitter. Guillermo Del Toro does the same each time he comes across a good peace of art. Richard Linklater is doing the same with Austin Film Society, where he presents a film that he likes in front of hundreds of people, and talks about why he likes the particular film and what the audience should look out for while watching it. And even though I am not as accomplished as any of these filmmakers, I like to talk about great art too.  And amidst all of this, there is a possibility that the majority of people who follow Chalchitra Talks might never get to know that I am a filmmaker. But I think it’s okay. Because I get excited about the fact that some people will definitely try to go backwards and discover my other works as well. It’s like Chalchitra Talks is the “Los Pollos Hermanos” where I sell chicken wings, and it enables me to silently create crystal meth at Braille Cam, the platform where I make short films.

When I had written on India Independent Films in April 2017, I had said, “‘Filmmaker,’ ‘Youtuber,’ and an ‘Entrepreneur’ are three different terms for three different things. And things will be a lot easier for you if you know which of the three you want to be. For the latter two, one may have to depend on external factors such as online revenue and virality. But if you’re in it to become a filmmaker, you should have no concerns with all this.”  I am sorry but my opinions have changed. I had misunderstood and underestimated the power of Youtube. I used to think that for becoming a Youtuber, I might have to do things that will not be in sync with my goals. But through Chalchitra Talks, I am able to do something which is one hundred percent in sync with my goals, only with a much larger audience. It’s not that large, but it is large enough that I am targeting to have Steve Carell on the show before the 500th episode. No, seriously. I now know who he is!