While watching the elevator scene in Sriram Raghavan’s AndhaDhun (2018), an idea popped up in my head to document some other memorable elevator scenes in cinema. In Lifted: A Cultural History of the Elevator, Andreas Bernard writes, “The moment where people get stuck in an elevator together is always a moment of truth. Let’s say a couple who has hidden secrets gets stuck together—they confess it. The room, which is so narrow and which is so close, is like a real confessional—a space where you’re forced to say the truth.” We don’t see a lot of that in Hindi films as the elevators (or lifts, as they are often called in India) have been primarily depicted as tiny places where romance, comedy, horror, and sometimes death happens.

One of the most popular portrayals of the elevators in the movies is as places where characters romantically flirt with each other. In Ek Duuje Ke Liye (1981), star-crossed lovers Sapna (Rati Agnihotri) and Vasu (Kamal Haasan) sing and dance in a hotel elevator much to the amusement of other patrons. While going back from a lunch date at a restaurant, Vasu stops the elevator and starts singing Mere Jeevan Saathi whose lyrics were made up of the titles of many Hindi films. The song became quite popular and is still remembered for its creativity. A similar song and dance sequence in an elevator also happens in Pyar Hi Pyar (1969), the only movie of Dharmendra and Vyjayanthimala together. Vijay (Dharmendra) bribes the caretaker of an elevator of a building to stop it when Kavita (Vyjayanthimala) comes for a party there. Trapped in the elevator, Vijay serenades Kavita by singing the very beautiful Main Kahin Kavi Na Ban Jaaon where he croons that he will become a poet in the love of Kavita (whose name also means a poem).

In Kal Ho Naa Ho (2003), Naina (Preity Zinta) introduces her best friend Rohit (Saif Ali Khan) where he is shown to be flirting with a woman in an elevator. However, he is unaware that the man standing beside her is the woman’s husband who obviously is not happy with his shenanigans. The same scene is repeated later in the film when Aman (Shah Rukh Khan) imagines his life as Rohit. In Bachna Ae Haseeno (2008), the philandering Raj (Ranbir Kapoor) makes out with his neighbor Radhika (Bipasha Basu) in an elevator after which he moves in with her. In Sanam Teri Kasam (2016), Saru (Mawra Hocane) is trapped in an elevator with her neighbor Inder (Harshvardhan Rane). Unaware that the person dressed in a bear costume is Saru, Inder starts taking off his clothes till she tells him to stop. In the recent road-trip movie Karwaan (2018), Avinash (Dulquer Salman) bumps into his air-hostess neighbour while coming back from work in an elevator. He tries to speak to her but something keeps happening that prevents him from doing so. 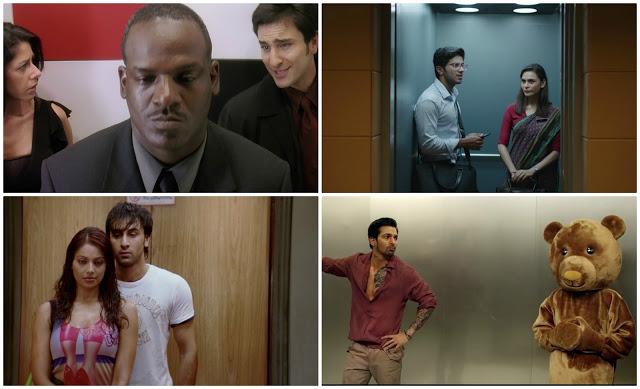 In Dulhe Raja (1998), Raja (Govinda) and Kiran (Raveena) are trapped in a lift and a cockroach shows up giving an opportunity to Raja to flirt with Kiran, giving one of the hilarious scenes in the film. In Ugly Aur Pagli (2008), Kabir (Ranvir Shorey) farts in an elevator and gives a name to his fart smell (not kidding!). Unfortunately, a beautiful girl enters the elevator at that moment and is turned off by the smell and immediately gets out.

In Milenge Milenge (2010), largely inspired by Serendipity, Priya (Kareena Kapoor) and Amit (Shahid Kapoor) talk about the role of destiny in their lives. They decide to play a game where they will enter into two different elevators at a hotel and if they end up on the same floor, then, they would believe that destiny indeed wants them to be together. When they enter the elevators, both of them press the sixteenth floor; however, Amit’s elevator stops on different floors and by the time, he reaches, Priya had already left. In Ek Main Aur Ekk Tu (2012), Rianna (Kareena Kapoor) and Rahul (Imran Khan) meet again in an elevator when they are going to the psychologist. In Happy New Year (2014), there is an entire sequence in an elevator where Charlie (Shah Rukh Khan) and his gang telepathically speak to each other without saying anything.

The elevators play a special role in contemporary Hindi horror films where they are often associated with a supernatural event. In Ek Thi Daayan (2013), the elevator is shown as the gateway to hell. A child reads a book of witchcraft from which he learns the number 666 and uses it to time travel on the apartment elevator to some unlisted floor at the bottom of the building, which is called as the entry to hell. In Naina (2005), after receiving a corneal transplant, Naina (Urmila Matondkar) sees dead bodies everywhere. In one particular scene in an elevator, she is terrified when she is trapped there with a dead body. In 13B (2009), a clue that something is not quite right is provided by the building’s elevator. It never works when Manohar (Madhavan) attempts to ride in it alone and works perfectly fine if there is a companion with him. In Bhoot (2003), the repeated elevator sequences add to the spooky ambiance of the film. In an interesting research paper titled The Security Aesthetic in Bollywood’s High-Rise Horror, Bishnupriya Ghosh elaborates on the role of gravity and the elevators in horror films set in high-rise buildings. She writes, “The elevator in the high-rise horror becomes the metonym for the mechanical and electrical infrastructure constitutive of vertical living. The key sequences depicting the main protagonists’ mental distress introduce gravity as the nemesis of high-rise living. Postproduction shaky zooms at fast camera speeds through corridors and lobbies, and, most often, in plunges down the gleaming, steel-plated elevators create sensations of losing control over height. The fall in the elevator, a staple of high-rise horror in general, counters the earlier sensations of floating but controlled remoteness from the geophysical surroundings. Bhoot and 13B, for instance, incorporate at least six or seven elevator sequences hurtling down to the underground car park; four or five sequences in each film take place there, in those parking lots.“

In the supernatural thriller Talaash (2012), Suri (Aamir Khan) meets the prostitute Rosie (Kareena Kapoor) in a glass elevator where he speaks to her about the accident case that he is investigating. She had provided some valuable information regarding the case. Later, after the truth about Rosie’s ghost identity is revealed, the scene is shown in a flashback as another instance of Suri talking to himself. 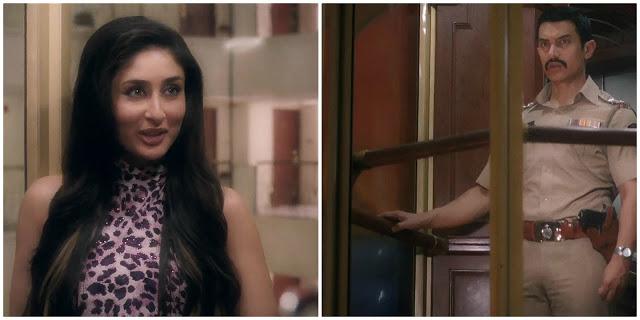 Sriram Raghavan pays homage to one of his favourite films—Elevator To The Gallows—in his delicious thriller AndhaDhun (2018). Manohar (Manav Vij), the inspector having an affair with Simi (Tabu), is called by Sakku (Chaya Kadam) and Murli (Rudrangshu Chakrabarti) to deliver the money in the elevator of an under-construction building. Manohar manages to catch hold of Murli but is trapped in the elevator by Sakku who shuts it down when he is coming for her. Manohar is eventually killed by one of his own gunshots in the elevator. In the new Don (2006), Kamini (Kareena Kapoor) who was working at the behest of the police is kidnapped and killed by Don (Shah Rukh Khan). The police find her body lying between the doors of an elevator that were repeatedly trying to close but could not due to the stuck body.

In Darr: A Violent Love Story (1993), an elevator appears in two crucial scenes. The stalker Rahul (Shah Rukh Khan) follows Kiran (Juhi Chawla) to her apartment in a high-rise building in an elevator. As Kiran stays on the top floor, the elevator becomes progressively empty with only Rahul and Kiran left. At one stage, he plays with her dupatta and attempts to touch her but she gets out in the nick of time. Later, after her wedding with Sunil (Sunny Deol), an angry Rahul attempts to kill them by cutting the connecting wires of the elevator. They are saved but the police officers sent to protect them are killed in the act.

Vijay (Amitabh Bachchan) in the iconic Deewar (1975) meets a smuggling leader Samant (Madan Puri) in an elevator and offers him vital information about one of his business rivals. On being asked the reason for his business proposal in an elevator, Vijay replies, “Suna hai lift ki deewaron ke kaan nahi hote.” In Bluffmaster! (2005), Dittu (Riteish Deshmukh) plays a minor thief where tries to rob Roy (Abhishek Bachchan) in an elevator. He forcefully stops the elevator but manages to get himself out. He then offers to help Roy come out with the intention of stealing his bag. Little does he know that Roy is a master of such tricks and is a bigger conman than Dittu. In Ghajini (2008), Sanjay (Aamir Khan) is trapped in an elevator by Sunita (Jiah Khan) when he comes to her hostel trying to kill her. He is only released when the police arrive at the scene. 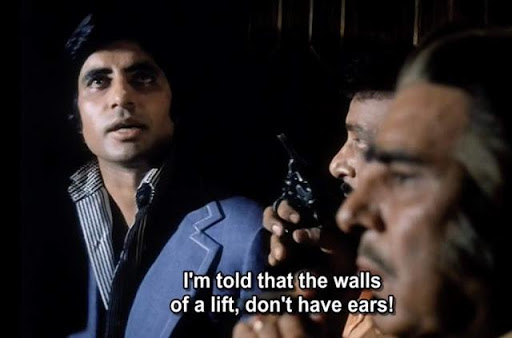 In Aisha (2010), an adaptation of Jane Austen’s Emma, the lift is the place of confrontation. Aisha (Sonam Kapoor) and Arjun (Abhay Deol) have a war of words in a hospital elevator where Arjun accuses her of meddling in other people’s lives. In Badlapur (2015), a vengeful Raghu (Varun Dhawan) is looking for Harman (Vinay Pathak), the man who played a role in the killing of Raghu’s wife and son. In a brilliant scene, Raghu follows him in a glass elevator. Harman seems to recognize Raghu but pretends to behave casually in front of him. In No Smoking, K (John Abraham) sees the same man everywhere after the blast in his car. The man who is the guard at his office is the same one whom he meets in the elevator giving them the moniker Ram and Shyam. In one particular elevator scene in the film, director Anurag Kashyap also makes a guest appearance.

In Tamasha (2015), the elevator scene is used to show the change in the personality of Ved (Ranbir Kapoor). While going to work, like a well-mannered boy, Ved would hold the elevator for a lady every day. However, when he starts undergoing a mental breakdown, he does not wait for the lady but animatedly closes the elevator, leaving her outside. In a memorable scene in Lust Stories (2018), Sudha (Bhumi Pednekar) eats some leftover sweets given to her by her employers while waiting for the elevator, giving us some subtext about the film’s theme.

Film writing and analysis in the West is so good that they already have written something on this topic. The elevator scenes in English movies feel more innovative and diverse than those in Hindi movies. Until that happens in Hindi films, we will have to contend with oonchi hai building, lift teri band hai.

[To read more of the author’s work, log onto his blog here]