Moving with the movies

A Caravan is defined as ‘a vehicle equipped for living in and used when traveling for recreation.’ History defines it as a group of people with a purpose – traders and pilgrims – that travel together across vast expanses of land. And so, as worshippers of cinema, interested in its cultural impact, equipped with a mischievous bent of mind, we at Lost The Plot thought ‘The Film Caravan’ a fitting name for our festival.

The Film Caravan Festival is a traveling film, music and performing arts festival. Our vision is to create and nurture a community of engaged, discerning consumers while providing a platform for young creators to be discovered.

Our tight team of three started planning the first edition of the festival in October last year. Skipping the exuberant chaos of December, we picked the wise month of January to host it. Of course, our very first edition would have to be in our hometown, homage to all the support and good will Pune has shown Lost The Plot across the last 4 years.

While the focus of the event was to bring unique films to larger audiences, we have always appreciated that filmmaking at its core, is a collaborative art form – it draws on the skill and talent of many artists – writers, actors, musicians, painters, cinematographers and brings them together to create something new. We wanted the festival to embody this peculiar aspect of cinema, which is why it features a multi-disciplinary programme, unlike other film festivals. We also hope this will allow creators and curators from different fields to meet, interact and sow seeds for future collaborations.

The idea was to explore storytelling in its myriad formats – through not just cinema but also music and verse, theatre and even haiku! We began reaching out to like-minded organizations in October – the Pune chapter of Sofar Sounds – global champions of intimate gigs featuring independent music; Bullock Cart Poetry, our long time collaborators and the oldest multi-lingual poetry collective in Pune and HaikuJAM, a Bombay based app making haiku poetry accessible. We also had onboard IAPAR, a local theatre organization that produces original plays and works to create safe spaces for the performing arts at the grass roots.

Our friends at the Alliance Francaise de Pune were also conspirators and enabled us to present French films at the festival while the short film segment, which focused on the story of stop-motion through the ages was co-curated by Pune based filmmaker and animator, Rucha Dhayarkar. Recently returned from completing her Masters in Animation, Rucha and I shared a common appreciation for the hard work that goes into the craft of animation and also a firm belief in the medium’s ability to move people without limitations of age, gender, nationality, background or language.

For the very first time ever, a festival was able to recreate the intimate setting of a ‘Sofar show’ – a secret, by registration live gig where the venue is revealed only a day prior and artists remain a surprise right until you show up. Audiences were pleasantly surprised that along with discovering musicians from Mumbai, Kashmir and Shillong, they also got to enjoy an entire day of festival activities.

Bullock Cart Poetry hosted a ‘Mead’ Slam – again, the first of its kind – where the city’s best poets competed for pints of ‘mead’ a mythical, honey based alcoholic potion said to give the drinker the power of poetry and knowledge. Sponsored by Asia’s only meadery – Pune based start up ‘Moonshine Meadery,’ the slam saw poets recite their funniest, quirkiest verses – some even improvised on the spot.

IAPAR performed a 60min play in gibberish – a thoughtful, whimsical play that addressed how violence impacts a child’s life without using formal language at all to tell its story!

The workshops at the festival introduced the basics of storytelling in different formats. Participants got to explore how stories can be told using verse, illustration, haiku or even just sound. We see workshops as a powerful way to convert curious viewers into discerning audiences, thus widening the reach of independent art, one festival edition at a time.

Daytime brought with it much activity, despite the strong winter sun. But the Film Caravan also brings with it the magic of open-air cinema! So as the sun set, dusk fell and the day turned on its head, we unveiled our gigantic 30-foot screen and let the films roll. The Sound Factor, experts in AV installation and our technology partner for the event, ensured that sound & projection quality remained uncompromised even as viewers watched enthralled, under the stars. 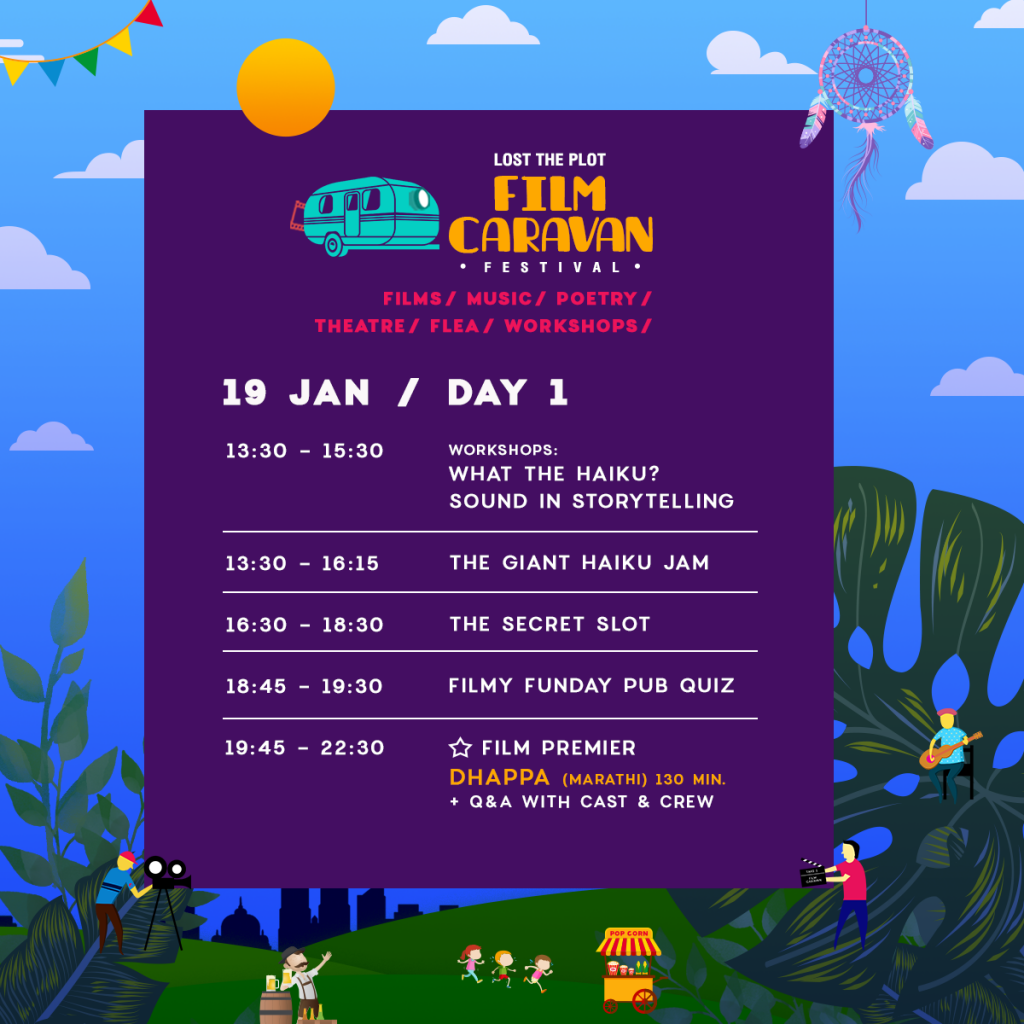 Day 1 was all about the storytellers telling stories that matter. We hosted an exclusive preview screening of the Marathi film ‘Dhappa’ followed by a Q&A with the cast and crew. An empowering film about a group of children who decide to take on India’s political clout, the National Award winner for Best Film on National Integration was a delightful watch. The Q&A, moderated by our friends at the Screengobblr blog, only enhanced the narrative as Akash Kamble, Akshay Yadav and Vrushali Kulkarni from the cast let us in on their motivations, experiences and hilarious behind the scenes stories. 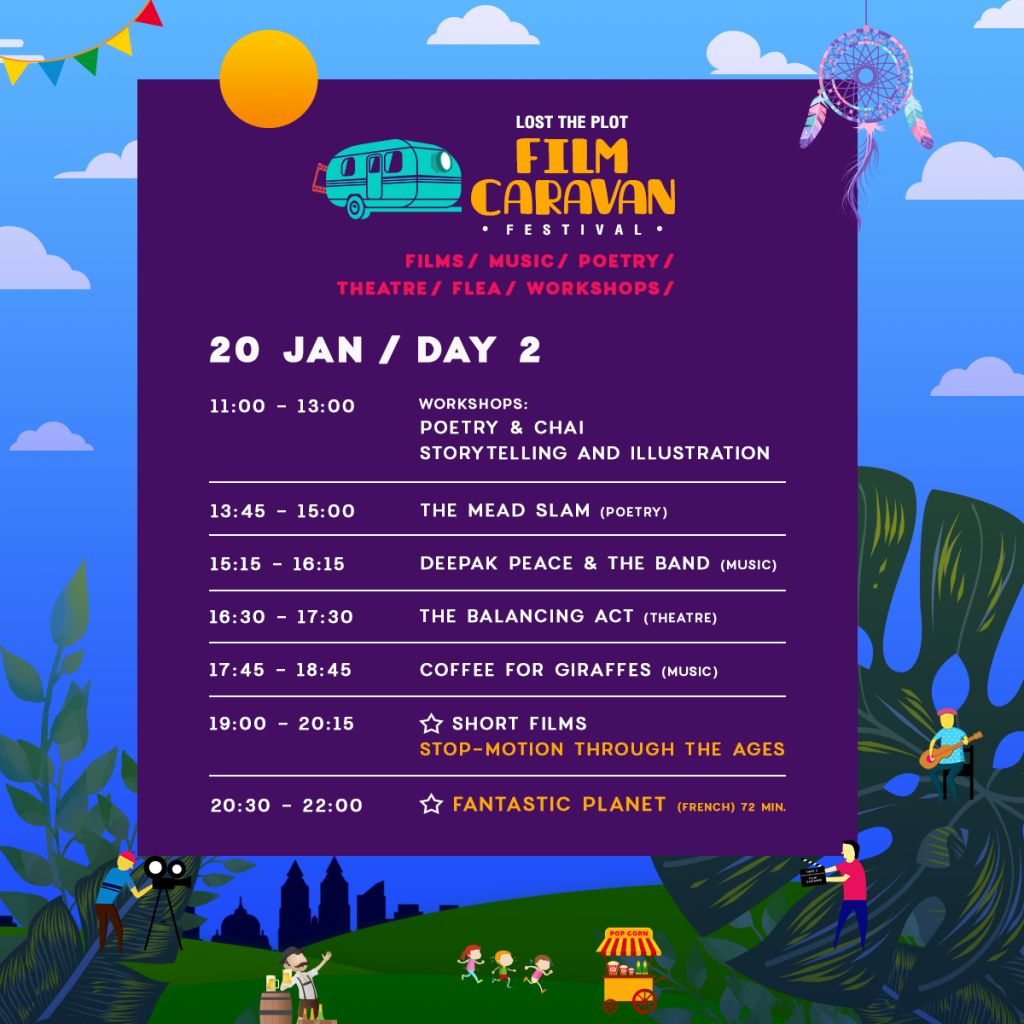 On Day 2, we chose to lead cinema audiences down the rabbit hole to discovery, with the spotlight on stop-motion animation. Our selection of shorts took viewers on a journey of stop-motion through the ages, featuring Indian and International films from 1922 all the way until 2018 before leading them into the spectacular, counter culture French classic that is ‘Fantastic Planet’ – our closing act for the Festival screened with the help of the Alliance Francaise.

An easygoing, friendly environment and quirky décor is Lost The Plot’s signature setting for our events. The pop-up section thus hosted a number of food & beverage brands that are passionate about what they do and view their wares as handcrafted pieces of art rather than products. Local companies with an international approach – it featured craft brews by Great State Aleworks, Independence Brewery, and Moonshine Meadery, premium gin cocktails from Stranger & Sons and delicious grub from Mahlzeit (Berlin Street Food), The Bowl and the Gourmet Men.

Hosting this festival, which saw around 400 people across the two days, would have been impossible without the support of our partners but more importantly without our fantastic volunteer team. Dedicated and hard working, their enthusiasm was infectious and kept our core team bright through the background chaos of executing a large-scale event. Bringing together so many different people, organizations, skill sets and talents under one common roof (or lack thereof) was a most rewarding experience and compared to the months of planning, the two days went by too quickly, albeit in a deeply satisfying blur. And as we take stock of the aftermath, look through photographs and pack up the Caravan, we’re sure that edition two will have much to look forward to – including a wider selection of independent films and a flea market featuring environmentally conscious lifestyle, food and fashion brands. 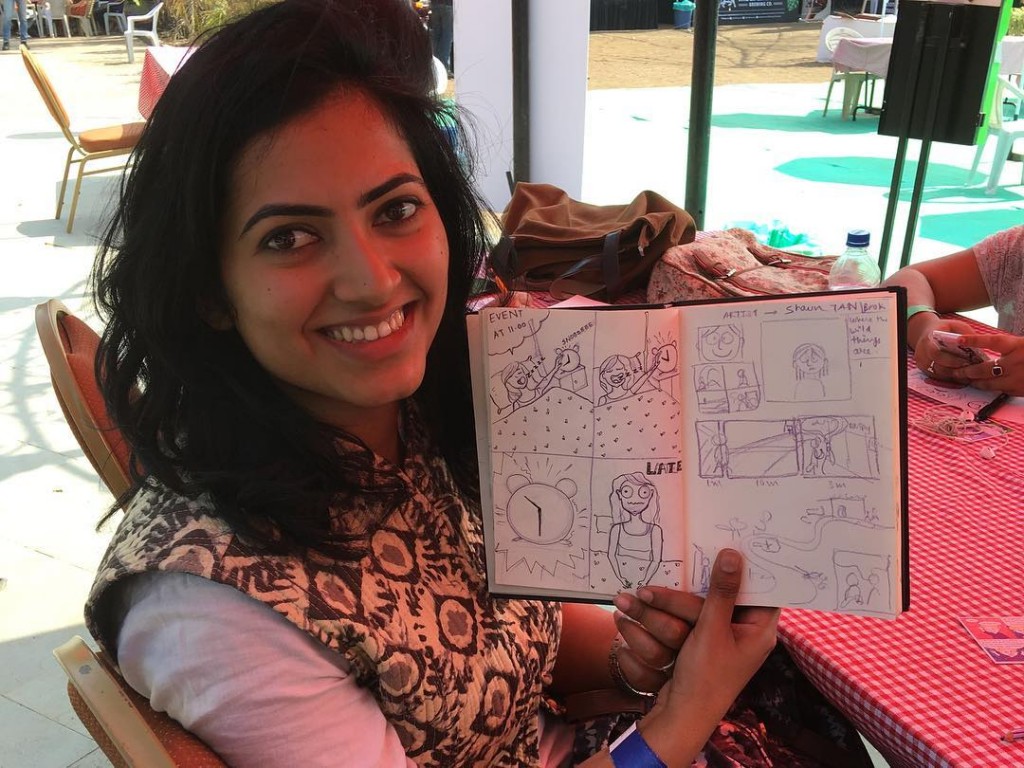