Gulabi Gang: What questions to ask, and when

In one of the earlier scenes in Gulabi Gang, we see Sampat Pal Devi (Gulabi Gang’s leader) sitting among a bunch of women, talking to them and urging them to join the gang. During the course of her speech, she faces the group of women but for a fleeting moment quickly steals a glance at the camera. It’s an important little sequence because the camera suddenly acquires an identity here as its presence has been acknowledged. And this is not the only time in the documentary when the characters become conscious of the camera watching them. In the subsequent scenes, the police inspectors want the camera to stop rolling; a villager keeps looking at the camera when he’s embroiled in an altercation; similarly, another villager stealthily looks at the camera when he’s cornered by Sampat Pal. You wonder how these situations would have played out had the camera not been there. Most of us are fixated on knowing the ‘truth’. You want to absorb these scenes unfiltered, but in some situations it’s quite clear that the responses from people—to varying degrees—come from a certain consciousness that they are being watched. And given you are watching a documentary, which functions by documenting the moment—or ‘truth’, if you will—you want a complete understanding of the situation, but you soon figure out that it’s not going to be that easy.

It’s also interesting to know what ‘truth’ the director is more concerned with. For instance, in one of the scenes, the camera enters a dark hovel, where a girl has died. The death was caused by burning (the suspicion towards her husband is firmly in place). To begin with, the camera performs a perfunctory role—concentrating on the characters speaking—but as the scene acquires a more grim tone, the camera’s role, and subsequently its importance, increases. Will the filmmaker choose to show us the charred body? The scene suddenly acquires another dimension and spawns a different set of questions — something you would probably not be asking yourself in a feature film. Or, the scene where a ‘commander’ of the gang gives us a peek into her personal life and her reasons for joining the gang. She’s close to breaking down and you wonder how the scene would conclude. Would we see her break down ultimately or will the scene give the woman her moment of privacy? In both the aforementioned scenes, director Nishtha Jain shows us what we could have imagined, but it’s to her credit—and to the tone of the film—that those bits don’t play out to shock us or tug at our heartstrings. In fact, it’s quite heartening to see how, in Gulabi Gang, both the form and the content often befriend each other.

The documentary, at various points, mulls over what constitutes the definition of a woman. Especially in this unsparing milieu, which is not only beset by corruption and poverty, but also where being a woman is a challenge in itself. And you can’t help but wonder how this documentary would have turned out had it been directed by a male. Because what’s interesting here is not only the relationships among the various members of the gang—at times marked by bonhomie, at times by hostility—but also the relationship between the filmmaker and the Gulabi Gang members. Consider the scene where Sampat Pal reveals how she formed the gang, or the one where another gang member answers why she chews tobacco. In fact, in both the scenes, the women are not merely speaking to the camera, instead they are confiding in the filmmaker, as if bonding with a friend. The giggle and the deliberate cheekiness in those conversations are quite apparent. It’s the sort of luxury that comes more naturally to the conversation between members of the same gender. 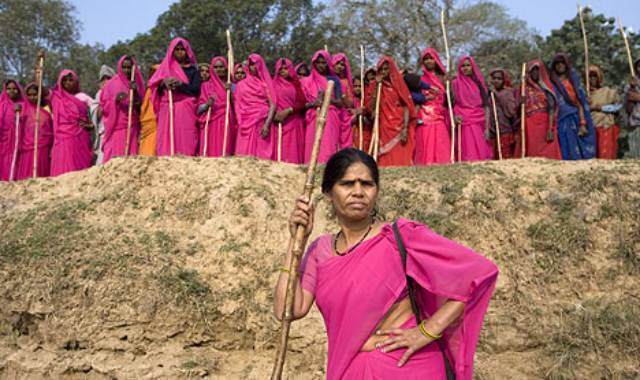 For a film that deals with such grim social realities, its dark humour took me by surprise. In one such scene, where Sampat Pal is talking to the sister of the girl who committed suicide, the girl says her sister died from a “Goli”. Sampat Pal makes sure: “Zehar waali goli?” The scene is both funny and unsettling because in these badlands, “goli” can also mean a bullet (And, sure enough, in one of the later scenes, we see a pillion rider holding a rifle in his hand). There are plenty of scenes like these in the film where the milieu opens its darkness and leads you to a situation where horror and humour convene.

Since Gulabi Gang plays out more like a narrative feature than a conventional documentary, Jain doesn’t hand hold the viewer through the narrative. We are on our own to figure out the plot points and join the missing pieces. In fact, recent documentaries such as Katiyabaaz, Bidesia in Bambai, also unspool similarly. This form suits these documentaries the most; the filmmakers are not being instructional here. Anything new that you absorb in these documentaries is more a by-product of the journey the filmmaker takes you through. You are not told how to interpret the truth. But, having said that, what sets apart Gulabi Gang is the consciousness of its filmmaker, or the fact that she’s present in some of the scenes of the documentary.

In Katiyabaaz and Bidesia in Bambai, the filmmaker is entirely absent from the film (barring perhaps one scene in Bidesia in Bambai where you can hear Sharma asking questions to the migrants), and it’s only fitting because in such a case the narrative remains uninfluenced. But Jain’s presence in a few scenes helps the film more than anything else, because we want someone to ask the questions for us. Take the scene, where Sampat Pal visits the house of the girl, whose husband is suspected to have killed her. Sampat Pal nonchalantly says that the girl’s parents can “compromise” if they want to. That bit is instantly unsettling; the fact that death can even be converted into some sort of a transaction. The scene ends but the question floats in the air and you don’t know what to do with it. But, in the next scene, we hear a female (perhaps Jain’s voice) asking Pal: “Aap kuch compromise ki baat kar rahe the (You were talking about some kind of a compromise)?” And, I am glad she asked the question, because it was gnawing at me. And although it disturbs the aesthetic of the documentary a little, nothing can be more disturbing than not knowing the truth, or knowing the half-truth. Also this is not the only scene where Jain interrupts the characters on camera. And this intrusion—if you want to call it that—not only elevated the film for me, but, in a couple of such instances, I also felt relieved because someone was asking the questions on my behalf. Surely, there are things more important than the sanctity of a narrative.

Gulabi Gang also bares open the conflicts of the people in Bundelkhand. By the time the film gets over, we understand their primary conflict: of choosing between the familial right and the societal right, of standing up against your own family members if they are wrong. That the honour of a family is a concept that’s more often than not misguided. You want to be self-righteous for a moment and tell those people that perhaps the only honourable thing is to do the right thing, even if that means going against the people you have grown up with. In a scene that can only be categorized as horrifying, Husna, a former Gulabi Gang member, looks at the camera and says that it’s perfectly okay for her brother to murder her sister if she has soiled the family honour by falling in love. Jain explicitly asks her, what’s ‘wrong’ in falling in love? And implicitly, how can murder be justified? Husna fumbles for a moment, but finally settles on her answer: “Yehi sahi hai (This is what’s right).”

Husna was a Gulabi Gang member for a substantial amount of time. She was happy with the ideology of the gang till it didn’t conflict with her sense of right and wrong. When the movie was being shot, the number of Gulabi Gang members was around 1,50,000. You wonder, out of those, how many of them are like Husna, who haven’t figured out their ideologies yet? In another scene, a girl lashes out against the fellow gang members because she didn’t get enough support in the election. The constituency had around 900 gang members, but she could only amass around 125 votes. These are uncomfortable questions that the gang members must confront and answer: How much of that 1,50,000 is actually 1,50,000 — or 4,00,000, the current strength of the Gulabi Gang? The questions float unfettered, but someone needs to keep probing. Someone needs to carry the dialogue forward.

[To read more of the award-winning author, log onto his blog here]