Sounds like a diss, right? Happens in abundance when you’re not a professional critic. While this is a harsh dig on anybody who is into offering an opinion, the onset was obvious and foregone.

Twenty years ago, when oblivion and limited exposure was the name of the game, my generation was growing up. We consumed what was being offered to us. In hindsight, when we realize what we’ve consumed, a major portion of the demographic freaks out. Between then and now, we got a vessel, a medium to amplify our voices.

I write about films on social media. I can’t call those reviews because they don’t qualify as the same. I get called varied names ranging from pseudo intellectual ***ch to an entitled, self-absorbed dealer of female flesh. Over the years, it has become music to my ears.

One day, I put myself in those shoes – people with poetic cuss codes. Tried to find sense in their annoyance. I didn’t go Eureka but had quite a realisation.

All of us like to have our voices heard. Spotlight is an emotion. It releases dopamine, makes us feel really good about ourselves. We open that app, be it Facebook or Twitter, to check how many people have offered us attention, again and again. And again.

The online universe has become really bitter. Or has it? There is a counter debate for every debate. There is a question for C when you’re answering A. The level of discourse has gone down to the dumps. We seem to be at each other’s throats all the time.

But, how many of us are actually in for it? Do we really care about the endgame or output? Are we really concerned about a certain topic or is this just behti Ganga mein haath dhona?

To drive my point home, I’ll cite the Anushka-Litter incident. A guy littered on the road. Anushka yelled at him. The former felt ashamed. People took no time to take sides on social media. Everybody looked so concerned. What did it boil down to? The accused had his mother defend his moral welfare and diss Anushka, calling it a PR stunt. Again, people took sides. Yay. So much democracy.

This also applies in films. We have found a voice. We grew up watching critics on television and reading them in newspapers and magazines. Now, we can be that. We have the basic intelligence to reason. Why not?

The best things in life are mostly aspirational. This is highly an Indian phenomenon. We aspire to be something that makes our eyes twinkle. Talking about films reflects our intellect. It makes us stand apart on crowds as the one with a ticking mind. It makes us cinephiles. It releases them dopamine dollops.

This, however, is a double-edged sword. Uncle Ben said, “With great power, comes great responsibility.” This power in the wrong hands brings adverse effects. Pen is mightier than a sword. It can also be a knife if you use the nib to stab someone. Perspective plays a pivotal role here. Opinion does wonders for certain films. Borat released in mere 238 screens but WOM (word of mouth) skyrocketed this film to a cult status and it fetched 2611 screens. Remember Bruno that released around the same time? The film went down into the dumpster despite of being an equally raucous comedy. Back here in the Hindi industry, Jab We Met was about to be pulled off from screens but word of mouth made it a turning point in the careers of every involved in that film.

All this happened before the cyber explosion. Today, we live in a different world. We have 4th generation internet speed, sleek phones and a mind that consumes tonnes of content everyday. We are opinionated. We are more aware than we were a decade ago.

Millions check-in to a movie theatre and describe their experience in as less as a sentence. There are influencers who are paid to be your marketing puppet. There are a thousand voices influencing us everyday. What differs is the level of authenticity. The intent and USP of liking or disliking a film vary with every passing individual. Dear Zindagi was called brilliant cinema by many, whereas that film is basically a breakaway from the routine garbage we are catered. Everybody trolled Race 3 but the film accumulated 140% profit and is a blockbuster. What do we really dig? If our voices were so hell-bent on changing things the status quo would’ve been eradicated years ago.

Here comes the catch. Our attention span is cracked. We are the era of instant gratification. We raise a point and move onto the next hot topic. Everybody raised a finger during Jessica Lal’s murder. Nobody actually went up and advocated against Manu Sharma. Aarushi Talwar just had some protests and candle light marches. Everybody questioned the rapists and their lawyers but nobody pointed out how flawed our judicial processes are and how new amendments should be introduced.

We criticise till we have time. We aren’t directly in contact with the ones offering a certain service or disservice. We raise a voice. Let people know we raised a voice and go back to our cocoon. Our criticism of a film is based on how we think it should’ve been and not on how it actually is. We majorly bash a film. Analysis is rare. And that’s the vogue. Spicy rants go viral these days, yo!

Veere Di Wedding was a bad film. It was thought leadership. It is a part of this rash left vs right ideology running through the country’s veins. There are many such awakening films which put forward a certain burning topic. But cinema is not civil reform. It has never been and will never be a social responsibility. Films don’t change governments. They don’t change systems. They definitely don’t change perspective. 3 Idiots didn’t trigger the entire country to chase its true passion. NH10 didn’t stop foeticide and polyandry or honour killings. PK didn’t put an end to superstition. They just serve awareness at max for those given hours. But popular opinion lifted these films to a holier than thou pedestal. Your friend or bar must’ve told you how good the films are. Peer pressure mein aake dekhni padi hogi.

Critique in our country is like singing or dancing; anybody shows up and brandishes it. What we have to remember is that every art form has an affixed science and grammar. There is nothing such as raw talent. People train themselves in a discipline. This doesn’t mean everyone has to become a critic to offer feedback. But what makes this world a safer place is informed opinion. We read a clickbait and majorly fall for it. This creates a domino effect. Comics write jokes, pages post memes and vlogs. Everybody does something to stay in, stay relevant. So why lag behind in this race? And there we fall right into the pits of influencers who are salivating for our reaction, our click, that one extra hit which would make ’em reach 1 million views. Why else do you think these people cry like crocodiles on Musical.ly? Controversy creates cash. Reactions create controversy.

In this jetspeed world, we are majorly lonely people stuck with our phones, seeking social acceptance. It is easy to get noticed online, and in a world where tangible happiness is the mantra, this intangible happiness matters a lot to many of us. 20 log taareef kare toh accha lagta hai.

But, in sheer oblivion, we forget that every body has a voice. Every voice may not be pertinent. Even this article is an opinion. Credible for those who’d think. Merely a rant for those who’d differ. And I’ll definitely be happy if this spreads. I don’t know how pertinent this is. Years ago, some friends told me I write well and should make this a profession. I’ve been ‘reviewing’ films since 2008 on my Facebook timeline. Haven’t influenced anybody to date.

But I have a voice. When people commend my writing, pat me on the back, encourage me to do more, trust me, bahut accha lagta hai. How informed I am? That’s a question I ask myself everyday. I’m just like the thousands online. I got this portal fairly easy. I am another spoke in this giant wheel. I’m a critic next door. That’s what I think. That’s what most of us think.

But as The Rock says, 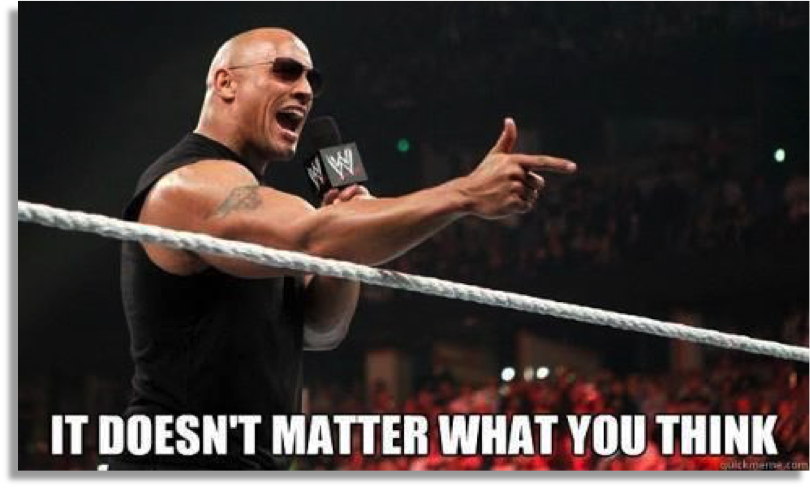