In Omkara, inspired by Shakespeare’s Othello, Omi gifts a jeweled cummerbund, an heirloom, to Dolly, who carelessly drops it. The cummerbund is stolen by Indu who gives it to Langda. It eventually reaches Kesu who gifts it to Billo Chamanbahar. The cummerbund plays an important part in the story as it becomes an evidence of Dolly’s fidelity. In Haider, adapted from Shakespeare’s Hamlet, Arshia knits a red muffler which she gifts to her father. After her father is shot dead by Haider, Arshia is seen unknitting the muffler. A few moments later, she is lying on her bed, with the muffler completely unknit, and the strands of the red wool on her face signifying blood and death.

In Ek Main Aur Ekk Tu, Rahul gets a new best friend in Rianna when she gives him a second-hand film camera as a new year present. It is the best gift he has ever received as he had wanted to be a photographer. On the back of the camera, the words ‘Don’t Worry, Be Happy‘ are written, which form the essence of the advice that Rianna gives Rahul where she tells him that he should loosen up and start enjoying life. In Ae Dil Hai Mushkil, Alizeh brings a cactus plant as a tohfa for Ayan. She says that flowers are overrated but goes on to praise the thorns. “Maarte hai, marte nahi, aur unhe murjhaane ka khauff nahi hota.” Thorns do not need to be afraid of wilting. Alizeh does not want to be a flower of a bouquet but prefers to be a thorn. When Ayan becomes a musical sensation, he is seen around a bunch of cacti. He collects those thorns, and keeps them with him as a remembrance of the pain that his unrequited love gives him.

In Dilwale Dulhania Le Jayenge, Simran had purchased a cowbell on her Europe trip. Raj comes to India to break Simran’s wedding and brings along the cowbell that Simran left back at her home. When he meets Simran’s sister Chutki for the first time, he gifts her a small replica of the same cowbell calling it a little gift for a little bride. In Queen, a naïve Rani shops for gifts for her family in a sex store called Kink Kong in Amsterdam. She gets a dildo for her grandfather as she thinks it is an electric massager and will help in curing her grandfather’s joint pains. In Aligarh, Professor Siras gifts a book of his poetry that he translated into English to Deepu. In Yes Boss, Rahul is the go-to person for any situation for his boss Siddharth. Rahul reminds him that it is his boss’ marriage anniversary and he has already purchased a gift for his wife, but would need money to transport the gift. Rahul brings a big white piano as an anniversary gift to Sheela, his boss’ wife. 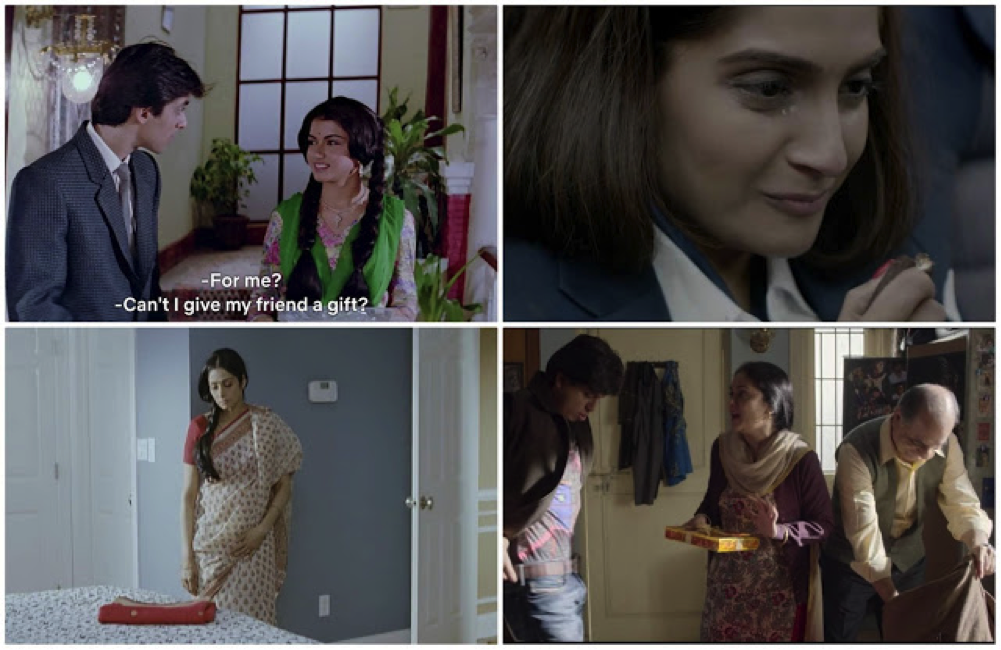 The beginning of relationships is often accompanied by an exchange of gifts. In Hum Aapke Hain Koun..!, Pooja sends a gift to Prem through Nisha. It is a brooch that Nisha puts on Prem’s jacket. Later, Prem brings flowers and chocolates for Nisha when he comes to pick her up at her place. In another instance, at the beginning of a new friendship, Prem gives a cap to Suman in Maine Pyar Kiya. The cap has Friend written on it and has become an icon of some kind. The same friendship blossoms into love at a later point, as someone said in that film that a girl and a boy cannot be just friends. In Om Shanti Om, Shanti gifts Om a souvenir of a man and a woman dancing in a glass ball after he saves her from the fire.

Sometimes, certain food items are also given as gifts. In Fan, Gaurav takes sohan halwa from Ghantewala in Chandni Chowk as a gift for his idol Aryan. His mother had given it to him when he was planning to go to Mumbai. However, Gaurav is unable to give his gift in the melee outside Aryan’s house. Likewise, in Bombay Talkies, Vijay offers a jar of murabba to the superstar Amitabh Bachchan at his house. After much struggle, he finally gets to meet the man who eats half of a murabba. In Pardes, Ganga brings some hot parathes for Arjun on his birthday.

A gift can also be a part of some tradition. In Bajirao Mastani, Bajirao gives his kataar to Mastani. The gift of a dagger was considered akin to marriage in Bundelkhand. Mastani accepts the gift and goes to Bajirao’s palace asking for her rightful place as his wife. Bajirao’s first wife Kashibai had jokingly called his dagger as her sauten.

There have been some instances where people have given expensive gifts, such as vehicles and houses. Harpreet Singh Bedi in Rocket Singh: Salesman of the Year gets a scooter as a gift from his grandfather who spent all his savings for the same. In Baar Baar Dekho, Jai hides his gift of a book when he sees that Divya has got a car as a gift from her father. In Mere Dad Ki Maruti, Tej Khullar buys a new Maruti car as a wedding gift for his daughter son-in-law. However, a few days before the wedding, his son Sameer loses the car when he takes it out for a drive. In Biwi No. 1, Prem gifts Rupali a new house where he can meet her easily.

In Secret Superstar, Najma sells her jewelry to buy the gift of a laptop for her daughter Insia. The laptop becomes a powerful medium for Insia to fulfill her dreams. She uses the internet to upload her videos and becomes a singing sensation across the world. In Kuch Kuch Hota Hai, every year on her birthday, Anjali gets many gifts but the most precious present that she awaits is the letter from her late mother. Tina leaves behind those letters as a way to communicate her story with her daughter. In Hum Hai Rahi Pyar Ke, Rahul brings gifts for all his sister’s children and Vyjyanthi. The kids are not happy with the presents as they wanted something else for them. However, it is Vyjyanthi who makes them realize the importance of gifts and that one should not hurt the feelings of the giver even if you do not like the gift. 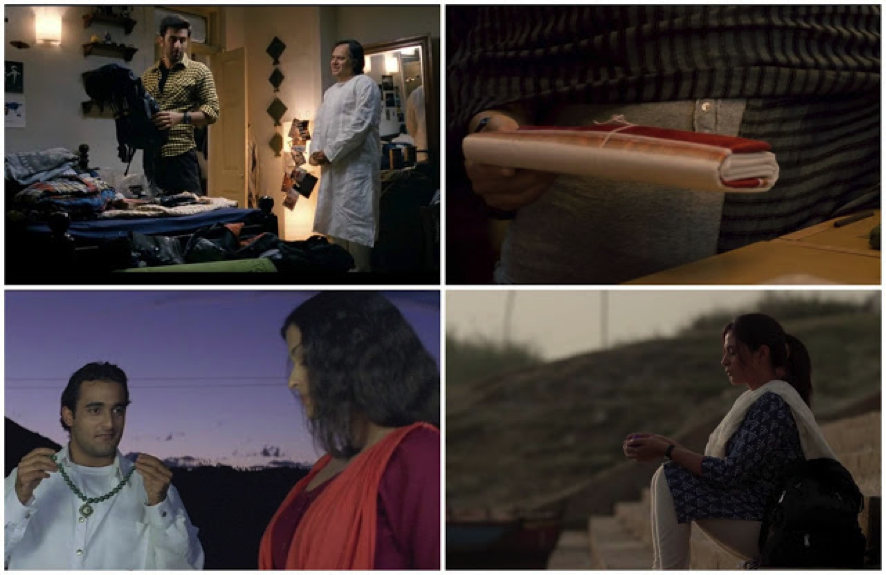 Lovers are the ones who give the most number of gifts in the movies. In Neerja, Jaideep gives a letter to Neerja and asks her to read that letter on her birthday. Along with the letter, he had given her a chocolate cookie. Perhaps, Neerja had some premonition that her life is going to end, which is why she reads Jaideep’s letter before her birthday. She was proposed for marriage, and the sweetness of the chocolate brings her a momentary comfort from the events happening around her. In Tanu Weds Manu, during her wedding celebrations, Tanu asks Manu as to what gift he is giving her. Manu has brought something special which he kept in Tanu’s room. Tanu goes to her room and finds that Manu has given her a beautiful collage of her pictures. She is immensely touched by looking at the gift. In Rehnaa Hai Terre Dil Mein, Maddy gives Reena a small statue of a girl which he thinks is like her.

In Kahaani, Rana, who has a crush on Vidya Bagchi, gifts her a white saree with a red border on the occasion of Durga Puja. In English Vinglish, Satish brings a red saree for Shashi which she wears at her niece’s wedding. In Taal, Manav gifts Mansi a necklace which he purchased from a shop near the temple. When Mansi meets him in Delhi, she breaks the necklace that he gave her. In Rock On!!, Sakshi is purchasing an expensive watch as a gift for her husband Aditya where she runs into his former music-band partner KD at a store. It is from him she learns about Aditya’s past. In Devdas, Dev gifts Paro a gold bangle that his grandmother kept for Dev’s future wife. When Paro meets Chandramukhi, she gives the same bangle to her, because as Dev’s other worshipper, she should have also the right to wear it. 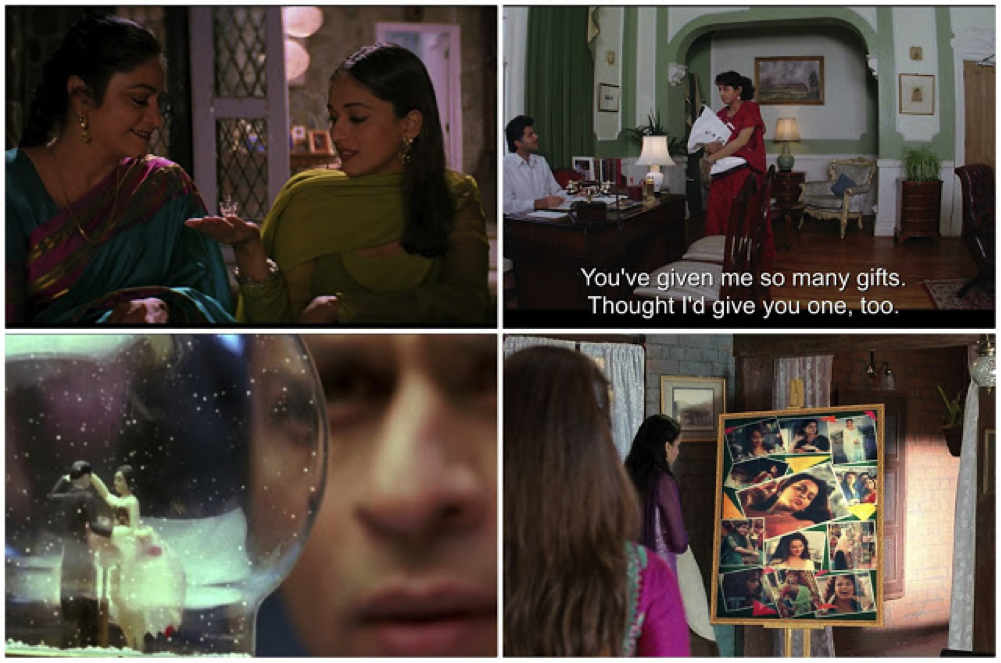 In Raincoat, based on O Henry’s The Gift of the Magi, gifts play an important part in the plot. Mannu and Niru grew up in the same neighborhood and were lovers once. Due to Mannu’s poor financial condition, Niru marries another guy. Six years later, Mannu and Niru are struggling to make ends meet. Mannu goes to visit Niru; they reminisce about the past and make up false stories about their perfect life. In the end, like it happens in The Gift of the Magi, they leave a gift for each other without letting the other person know. Mannu pays Niru’s rent, and Niru gives her gold bangles to Mannu.

Pooja’s Tai gifts her a Ganesh idol in Dil Toh Pagal Hai. Tai tells her that whenever she is stuck in a difficult situation in life, the idol will guide her to make the right decision for herself. It will give her the power to fulfill her dreams. In Lamhe, Viren gave gifts to Pooja on her birthday. She never opens the gifts. When she grows up, she asks Viren to give all those gifts to her from his own hands. Later, Pooja also buys another gift for Viren where she chooses a colorful sweater for him which is not per his choice, yet he wears it. Pooja’s mother Pallavi had also gifted him a traditional royal dress. In Yeh Jawaani Hai Deewani, the always-so-wonderful Bunny’s father gifts Bunny a trekking bag before his Manali trip. He is worried about Bunny going on a trip, but at the same time, he wants Bunny to live life on his own terms. In Black, when Michelle asks Debraj for a gift after she gets an admission to the university, he hands her a stick to tell her that it is the time for her to be independent.

In Masaan, Piyush gifts Devi a tiny box. After the incident with the police, Piyush kills himself. Devi keeps the box unopened till the very end when she submerges it in the river Ganga. We never get to know what is inside the box, but it reminds us that whatever be the gift, it is the feeling behind it that matters more.