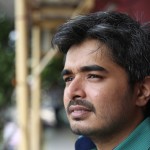 The idea for Bhasmasur came about when I read an article in a daily. Though it didn’t immediately transform into an idea or a film at first, it was unsettling enough and stayed on my mind since.

Bhasmasur is a film about people who exist on the periphery. As we bustle through grand bridges, shopping malls and fancy hotels, rarely do we pay attention to someone like Dhaanu, much less think about what his life might be.

Bhasmasur shows us rural India in the backdrop of it’s majestic landscapes: a story of love and sacrifice.

Once I graduated from film school, I was very dejected with the sort of opportunities I was getting, or the lack of it.

Soon I got in touch with my batchmates and pitched the idea for Bhasmasur, and they were more than supportive and keen to be a part of the film.

With limited resources at our disposal, we completed the film in two years.

The process was long and frustrating at times, it was in these moments of doubt that I got to see the crew getting together and pushing the film ahead with full vigour. I was fortunate to have such people around me.

Dhaanu, a villager, heavily in financial debt, stealthily returns from the city to the village one night. He is hiding from a moneylender, who he owes a handsome sum of money. Pushed against the wall, he decides to sell his donkey, Bhasmasur, in the city, to fetch a good price for the animal. Dhaanu’s son Tipu, who yearns to go the annual fair in the city, shares a very strong bond with the donkey. Dhaanu decides to take Tipu to the city too. The trio set off on a journey from the inlands of Rajasthan towards the city, by foot. Along the journey, numerous events take place, bringing the absent father and his son closer. But, will Dhaanu be able to make this bond last?