While most Indian netizens are tripping over the sudden explosion of new digital viewing platforms, it’s not difficult to see why TV still remains the primary medium for fictional content. It’s not only because of senior family members and housewives’ aversion to technology, or the absence of internet in rural areas. It also has a lot to do with quality. If consumers switch mediums and dump their idiot boxes, the other choice better be worth the risk. While there isn’t yet a profitable economic model in place, literally every small and big production house is jumping onto the digital bandwagon; some of them seem to just want to utilise an alternative unrestricted medium to create shows that are only slightly better than the outdated trash on television.

Most of the stuff over the last year (except the TVF shows) have been derivative, smartassey versions or contemporary interpretations of what Bollywood and Balaji already churn out like factories. In short, this is the beginning, and this platform is only at its embryonic stage. There will be more bad than good – as we’ve already seen – and none of them (as should be the natural expectations) will compete with Netflix or Amazon because of simple economics and numbers.

However, there are a few efforts that don’t deserve to get lost in this clutter. I admit it’s easy for film/TV journalists to get a bit wary when they hear about the launch of a web series; some things are taken for granted: low production quality, experimental writing, actors who aren’t “starry” enough for mainstream cinema, “struggler” character artistes, extended-comedy-skit syndrome, makeshift locations etc. 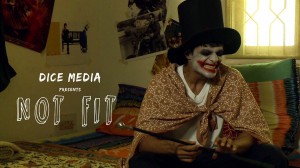 But ‘Not Fit’ — the new series by Dice Media — looks like a show that has understood all these inherent shortcomings and used them to its advantage. The title refers to the uncomplimentary phrase used by overworked (and at times, arrogant and power-drunk) assistant directors when casting for a new role; they simply filter out faces in the waiting room, subject to the film requirement and, occasionally, personal prejudices.
For starters, it explores a fascinating world of deluded Bollywood dreams within the suburban Mumbai lanes of Versova (namely, Aaram Nagar — the ultimate hub of tiny audition studios, production offices, shared flats and shady agents). Every dusty lane between dozens of office-cum-bungalow structures is populated by veteran strugglers, starry-eyed newcomers and starlets. The air reeks of excitement and desperation; there’s a tragicness to their existence of claustrophobic waiting rooms, missed rents and rejected faces. In a way, there’s virtually no design or decoration needed for the makers here; they shoot on location, imbibing the tackiness of the surroundings into their atmosphere.

Secondly, making this as a mock documentary (mockumentary, I believe, is the term) is a smart decision. This isn’t a result of low budgets or lack of resources; there’s a different kind of awkward, tragicomic charm about following a (fictitious) actor around with a camera. One is basically filming the undying quest of an artiste to perform on film. It’s a happy meta irony of sorts; being on screen is what the actor believes he was born to do, yet the omnipresent camera seems to convince him that he hasn’t totally failed.

More importantly, the creator Sudev Nair — who is also the series’ lead actor and the lead within the series called Nero (Neerav Kapoor) — seems to be in tune with the language of this chosen genre. Nair fits the Lokhandwala stereotype in every sense; he wants to be an all-brawn star more than an actor, and finds himself repeatedly in compromised and bizarre situations because of his lack of artistic ability. Six packs aside, his face has a villainous feel to it, which sorts of adds to the goofy, unassuming manner he brings to the role.
Nero is part Michael Scott (The Office) and part Wawrick Davis (Life’s Too Short) — a needy, self-ignorant mix that makes him interesting enough to make a documentary on (if one had to explore the complexities, beginnings and unreal ambitions of people in the line). The latter, in particular, cast a genuinely funny shadow over the workings of showbiz by following a pompous dwarfism-afflicted has-been actor. Nero, too, isn’t a figment of the imagination of someone who hasn’t stepped onto a film set; Nair and co. have breathed and lived the same air — as is evident from the littler moments: Nero living in a rich uncle’s empty flat, the parodying of the many official and unofficial artist “associations”, hyperactive costume designers, actors-cum-brokers, funny-accented audition rivals, the fraudulent pyramid multi-level marketing schemes that out-of-work actors pretend to peddle in their spare time, and the rooftop BYOB parties (also reminiscent of Amit Masurkar’s similarly-themed and very entertaining indie, ‘Sulemaani Keeda’). 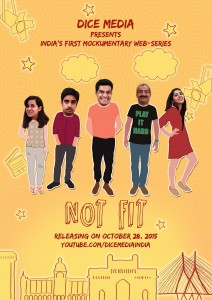 The obvious mockumentary inspirations — The Office, Parks And Recreation, Life’s Too Short, Modern Family — have always operated on a different level of timing, as well as a comprehensible and seamless harmony between writers, directors and camerapersons (not to mention the camera’s zoom and focus controls). Nair and his team decode this theme and grammar quickly, within the first few episodes (each is an average of 15 minutes); there’s a fair balance between the Point-To-Camera portions, the actual narrative and the cutaways, reactions/awareness of characters who behave like they know they’re being filmed.

More often than not, Nero is staring or grinning or smirking or pausing at the camera at the end of every new thread — a theme that he almost pulls off despite his intentional and conscious awkwardness. Slowly, one begins to get familiar with the treatment — which is definitely a layer on its own — and a bucketload of eccentric characters shape the wafer-thin episodic storyline of Nero’s basic journey from loneliness to all sorts of “Misery Loves Company” companions. The actors playing his cousin Robin (Ashish Verma; Jim to Nero’s Michael Scott) and sidekick Jubilant (Gagandev Singh Riar; Dwight to Nero’s Michael Scott) — both prototypes of culturally diverse strugglers — stand out because of the way they uncomfortably fit in. It’s both amusing and sad to see them tap into their last reserves of survival instincts. A few more good-natured cameos and actual on-set pieces could have perhaps lent a stronger personality to some of the more rushed episodes.

The overcooked ‘Freudian Slip’ gag (where characters introspect on the unintentional meaning of their own words) is Not Fit’s version of ‘That’s What She Said’, and there are also a bunch of theatre-versus-film cliches that may only seem unfunny and familiar to those in the know. The use of a background score during some scenes stood out like a sore thumb though; it’s a misfit in this genre. A mock-doc treatment relies solely on its cuts, awkward silences, character traits and the actors’ improvising; in fact, the quietness of it all must serve as an extra layer of anti-social-ness. Perhaps they’re not quite there yet. The slightly farcical and forcefully interactive last few minutes of the season confirm this. But a resolution is always a bit difficult to conjure up after 10 short fluffy episodes, especially when there’s no real guarantee of a next season.

All in all, Nero represents the self-depreciatory, goofy nature that these vapid lanes so desperately need. You hope to see simpletons like him, where you know there are none; they’re invariably the self-preserving, paranoid and dog-eat-dog types, and who can blame them really? He is a fool who uses the camera to demonstrate the denial he is in about his own foolishness.
I quite enjoyed getting to know him — perhaps because I’ve already met him in different shapes and forms. It doesn’t matter whether this is “India’s first mockumentary web-series” or not; it’s definitely a legitimate and well-choreographed interpretation of one.

(You can watch the entire series on Dice Media’s Youtube Page, or on TVF Play)