I was hoping to put the entire interview in one post, but I think we had too much fun talking for close to an hour. I also thought 3,000 words in one page would be overkill. So I’m going to ease you all into this fantastic conversation. Part two reveals how Laura and Meera got the amazing three girls together to star in “Farah Goes Bang”. 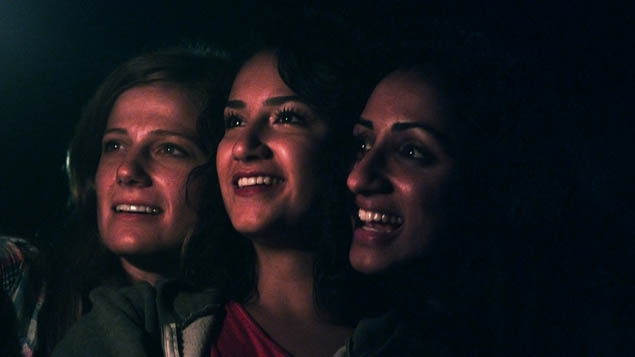 IIF: So if I’m not mistaken, I believe this was for both of you, your first go at a feature film right?

IIF: So talk to me about the growing pains of doing a feature film for the first time.

Goode: (Laughs) How much time do you have?

Menon: (Laughs) Yeah well it was definitely challenging in many regards. I mean I had been making films for quite some time and had gone to film school and had been on a few feature film sets. So I had certainly been around the stuff and I knew the nature of what it was going to be. But that being said, being at the center of that spinning wheel, which is what I believe the director’s position ultimately is on these sets, tests your level of emotion, physical and mental endurance. All of that stuff was absolutely tested. There were compromises made on a daily basis because of the extent to which those things were tested. But ultimately, because of the work you put into it, it’s that much more gratifying to cross the finish line.

Goode: There are so many production stories that we could share. One of them was that we shot for four weeks in L.A. and then for eight days in Wisconsin, where we shot on my family’s lake cabin, which was a really amazing personal experience for me. So I happen to post a Craigslist ad looking for a PA and we happen to get this guy named Jerry who was just an amazing addition to the team. He was a veteran of the U.S. Coast guard and that is the only reason that all of that boat work succeeded, all those canoes that you saw (laughs). He was totally responsible for that.

But he had a quote that I think about everyday that said “the worst day I have on a film set is better than the best day I have anywhere else.” That was just something that echoed in my head everyday during the experience. I mean there were 18-hour days, there were 20-hour days, there were days my feet hurt so bad I couldn’t fall asleep at night. But on every single one of those days, I was laughing with these brilliant amazing people, realizing our dream. So it makes so much of that pain drop away.

As for the producers role in all of this, Meera came into with a lot of experience and I cam into this with zero experience. So I was a virgin on the set of “Farah.” So everyday was about putting one foot in front of the other and trying to guide myself through instinct and hoping I was making any semblance of the right decision. What I would actually liken it to is [a circus]. I have an interesting in-law situation. My husband’s family owns a family carnival on the east coast and I think my father-in-law is like the executive producer of the carnival and I think that was how I felt most days. I was in charge of a carnival with all these things going on with all these spinning machines in motion, all of these people to keep happy, all of these customers to think about and it’s just a matter of keeping the show running. So I felt like the producer of the carnival sometimes in the best possible way.

IIF: That’s a good way to look at it I suppose. So tell me a little bit about the casting process. I think all three of the main characters, they really had great chemistry and it really made all the difference in the movie. I know a little bit about how you found Kiran, cause I spoke to her, but tell me about how you found the other two and how you brought everyone together.

Goode: It’s interesting because the three girls came to us in three very different, organic ways. I loved the way that Kiran came to us and I’m glad that she told you about it because that was the most hustler-ass-shit I’ve ever seen. She figured out the role that she wanted. She figured out a connection to Meera and had the prescience to invite Meera to one of her brilliant stand-up shows. I would characterize it as a very Indian-kind-of hustle and I was super impressed by it and continue to be impressed by Kiran in everything she does.

Nikohl and Candice came to us in very different ways. Nikohl was based in Vancouver at the time. And we were auditioning for Farrah and there is such a paucity of roles for women of color that I think the actress pool sometimes actually shrinks. So we saw a lot of people and then Nicole sent us this video from Vancouver that she shot in her agent’s office on a Tuesday night or something and she just blew us out of the water. She was really in a league of her own. Nikohl is one of those actor’s that can do so much by doing nothing. And that was something, in the first minute and a half of the film, that we saw.

Kandis came to us the latest in the process. We had another actress who was playing KJ who dropped out due to a scheduling conflict and we found ourselves without a KJ three weeks before production. Needless to say, we were panicking a little bit and we basically pulled together a list of our favorite actresses of our favorite indie films in the last year and Kandis was on that list because of a film that premiered at Sundance called “I Am Not A Hipster.” So she came in and auditioned for me and the casting director, Meera actually had to be somewhere else that day.

So she did the scene that you see in the film when she just gets out of jail and finally loses it at the girls, and she reduced us to tears. Our casting director and I actually had trouble stopping crying after the audition. Just to collect ourselves was kind of an effort. I would also call Kandis the least like her character of any of the three girls. I think Nikohl is not very Farrah-esque but I think she’s more like Farrah than Kandis is like KJ. Kandis would not punch someone if you paid her. She’s really an angel from heaven and so I think seeing an actress with that kind of versatility, especially once we got to know her as a person, really, really impressed us. And the relationship that the three girls formed together that you see on screen really happened immediately. That chemistry was instant so we got super lucky with all three girls.