Welcome to a new segment for Brown Hollywood called “Look! Brown people in…” We will be highlighting Hollywood shows, movies, webseries and more that feature South Asian actors and creators prominently.

Offensively hilarious. Those are the two best words I can use to describe the new web series out of Justin Lin’s YOMYOMF Network (You Offend Me You Offend My Family). For those of you unfamiliar with the network, check out this fantastic write up by Slate about it.

The story is about a super top secret elite police squad sent 25 years into the future from 1985 to take on the criminal underworld. It’s about as ridiculous as it sounds and it’s crazy funny. It’s “21 Jump Street” meets “Moonlighting” meets “Arrested Development”. And as I said earlier, it’s as offensive as it is funny (don’t worry it’s satirical…I think). But it’s equal opportunity racism. I think every ethnic group is touched on in some way. If you ever wanted to see a cop procedural where the Asian guy is not the department shrink, then this is the one for you!

Director and writer Gregory Bonsignore has made something that’s quirky, funny, meaningful and somehow oddly comforting at the same time. It’s great to see people of every race defying stereotypes while also embracing them at the same time. Each of the six episodes are fantastic and that’s not just because it has a bunch of brown people in it! 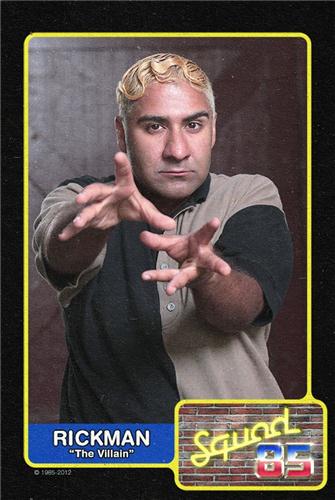 The show’s blond haired despicable villain is Alan Rickman (Parvesh Cheena). Most of you who read IIF know Cheena from “Outsourced” and “…Or Die”, which was also directed Bonsignore. His character is equal parts Dr. Evil, Bane and that blond haired guy Javier Bardem played in “Skyfall” (what was his name again?). Cheena really gets to shine here as he hams it up on screen. He is as absurdly funny as he is evil.

But he’s not the only familiar brown face. Sonal Shah (Sunny from “Scrubs”) plays the memorable reporter with Tourette’s. Much of her dialogue is NSFW but I guarantee you won’t have to play it over and over again to remember it (unless of course you want to). Then there is Rizwan Manji (“Outsourced” and “Charlie Wilson’s War”) who plays the principal of Dukakis High School, where Rickman is distributing drugs to his students. Manji has the perfect demeanor for an uptight, jaded, somewhat clueless and gay high school principal. I swear  I meant that as a compliment. On top of that we have some cameos from Janina Gavankar, Anisha Nagarajan, Guru Singh and more. Danny Pudi of “Community” also plays the mad scientist who sends the squad to the future. But if the after credits scene of episode 6 means anything, I think there is more to this scientist than we anticipated.

You guys can catch all of the “Squad 85” goodness right here. Let’s hope another season is in the works and some networks out there are paying attention to the awesomeness they can add to their lineup next Fall (or Winter, Summer or Spring).