“Patang” is perhaps one of the most genuine films I have ever seen. The movie won awards for Best Director and Best Picture at the SAIFF Rising Stars Awards Ceremony a few weeks ago. It’s a rare, unfiltered look at a world that is new and familiar at the same time.

The story is simple. Jayesh (played brilliantly by Mukund Shukla), a successful businessman in Delhi, returns to visit his estranged family after five years in Ahmedabad for Uttarayan, the annual kite festival. Old wounds and family troubles arise as Bhargava effortlessly weaves the story of six different characters during this celebration.

I’d be interested to actually see the script because it can’t have more than 30 pages of dialogue. The actors perform more with their eyes and less with their voice. As a result, the story is churned out slowly in the midst of the festival. The technique works wonders with a film like this thanks to Bhargava’s direction. His method is something I would call focused aimlessness. Close camera shots give the audience the most personal perspective possible. Every character lives and breathes as a natural entity. Even if we don’t get much back-story to any of the people onscreen, we understand them by the end of it all.

And it’s only at the end that you realize this was a film. It’s easy to get lost in the family discussions as if you are actually in the room. In fact, the Indian family aspect seemed so authentic and familiar that I could have easily mistaken it for one of my family’s home videos (except ours would not look this good by any stretch of the imagination). But don’t interpret that as dullness. I’ve rarely been so glued to a film where not much is being said. 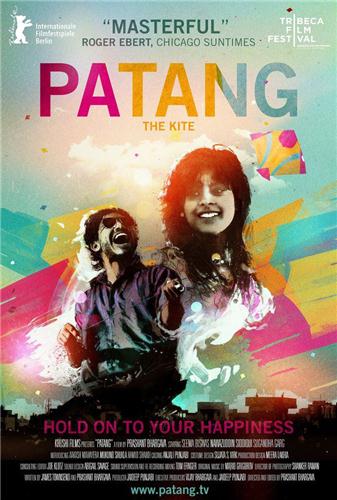 The performances are something else entirely. It seems as if Bhargava gave his actors almost complete autonomy over their portrayals and the results are fantastic. Each of them show a little something special. Nawazuddin Siddiqui and Seema Biswas are particularly noteworthy here.

Those familiar with the indie scene in India will undoubtedly recognize Siddiqui. He has already done some great work in films like “Miss Lovely”, “Dekh Indian Circus” and countless other movies. Here he plays Chakku, Jayesh’s estranged nephew. Chakku is presented to us as bitter and defiant. It was a role that could have easily become a depressed, black-sheep of the family stereotype. Instead, we get someone who is defeated, stubborn, heartbroken and courageous all at once. Siddiqui is, once again, flawless.

Biswas plays Chakku’s mother and is the stabilizing force of the film and family. Her delivery of the final speech to Jayesh is moving and enlightening. Her eyes are the most powerful in “Patang.” We get glimpses of sorrow and laughter without failure, despite what the circumstances might suggest. Bhargava smartly leaves the most poignant moments of the movie in her capable hands.

Before it’s over, you might realize this is actually a commentary on the nature of happiness masquerading as an entertaining family drama. The aura of one specific kite mirrors the family’s journey. It soars, falls hard, gets broken, gets mended and survives regardless of what is thrown at it. How does it manage to accomplish all this? I have my theories. But it’s all relative I suppose, much like happiness.