The South Asian International Film Festival (SAIFF) kicks off tonight with an awards ceremony celebrating the rising stars of South Asian cinema. IIF will be there all week covering everything we possibly can. Below is a press release  with all the nominees and information. The festival is co-sponsored by HBO. 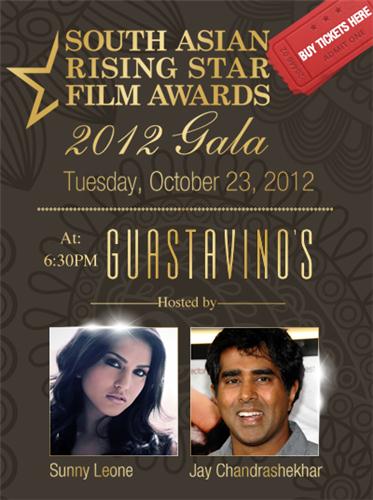 The South Asian Rising Star Film Awards Gala Dinner will be held at 6:30PM on Tuesday, October 23rd, 2012 and takes place at the stunning GUASTAVINO’S, located at 409 East 59th Street at First Avenue (under the 59th Street Bridge) in New York City.

The Ninth Annual South Asian International Film Festival is to kick-off on Wednesday, October 24, 2012 and end on Tuesday, October 30, 2012 in New York City.

The South Asian International Film Festival (SAIFF) is a 501(c)(3) not-for-profit organization dedicated to supporting South Asian/Indian filmmakers in the U.S seeking maximum visibility and absolute distribution. SAIFF was founded in New York City due to the lack of support for many emerging filmmakers and the overall underrepresentation of Indian cinema in a capital that is recognized by the world as the birthplace of independent filmmaking. The Festival is committed to exhibiting films from South Asia (i.e India, Pakistan, Sri Lanka, Bangladesh, and Nepal) and within the Indian Diaspora. For more information, visit: www.saiff.org.

Home Box Office, Inc. is the premium television-programming subsidiary of Time Warner Inc., providing two 24-hour pay television services — HBO and Cinemax — to over 40 million U.S. subscribers. The services offer the most popular subscription video on demand products, HBO On Demand and Cinemax On Demand, as well as HBO on Broadband, HD feeds, and multiplex channels. Internationally, HBO’s branded television networks, along with the subscription video on demand products. HBO programming is sold into over 150 countries worldwide. For more information, visit: www.hbo.com.