Imtiaz Ali, the director of such hits in India like “Rockstar” and “Love Aaj Kal”, was in New Jersey for the weekend to introduce an independent film called “Dekh Indian Circus” at NJISACF. While he was there, he graciously took the time to speak to IIF about the definition of independent films, the challenges of a filmmaker and what audiences expect from their movies. 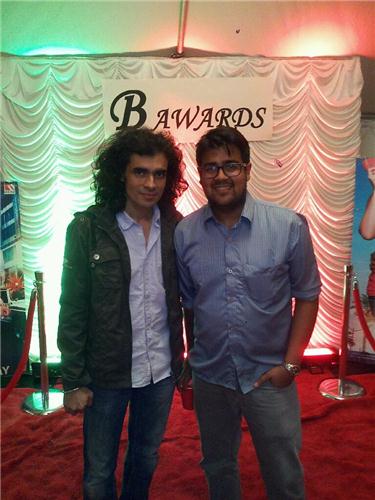 Imtiaz Ali and Paresh Jha after the interview. Ali was in New Jersey for the New Jersey Independent South Asian Cinefest.

IIF: Being such a big director in the Indian Film Industry and working on such huge hits with mainstream actors, what is your attraction to independent films?

Imtiaz Ali: See I think the concept of films, independent or otherwise, in India is a little different from the grammar in Hollywood. I think being independent, and to what extent, is a personal choice that directors have in India. For instance, speaking about myself, I have never attached myself to a studio. And each time, for each movie I collaborate with different sets of people, producers included, to make the kind of movie that the movie needs to be. It’s like each producer has a set of strengths and I feel that a particular film should be with them. So in that way I try to keep independent in that I’m not really “pre-committed” to anything. I think that’s a good model. It works for me. I think it’ll work for most directors.

IIF: So how would you describe the independent film scene in India then from your perspective? Because sometimes in America, anything that is a little dark, gritty or taboo is thought of as independent. I was recently speaking to Srinivas Sunderrajan, the director of Greater Elephant, and he said that sometimes people will do anything unique and call the film independent and proclaim they are in the independent scene. So it seems as if the definition of “independent” is very loose. What are your thoughts on that?

Imtiaz Ali: Yes I think so. Thats what I was trying to get at before. The definition is somewhat undefined when it comes to Indian Cinema. But taking the U.S. meaning of it, you have people who are making films that are not necessarily supposed to be formulaic in Indian cinema. You see more and more movies like that coming up. But not only that, you see more and more movies like that getting successful now. It’s almost as though anything which is formulaic, anything that reminds you of a movie that we’ve already seen in the past 20 years or so is kind of passé. The audience is no longer interested in that so a new thought is imposing itself and more film directors are encouraging themselves to think out of the box.

IIF: Most independent films are generally considered to be on a small budget. Do you think a film can be on a large budget with a huge production studio and still be considered independent?

Imtiaz Ali: See there is financial risk in all movie making. Technically it can be independent cinema, but then what everyone does is they have their own ways of calculating the risk. For bigger budgets, you’ve got to have more detailed calculations. Sometimes producers tend to go with big stars because they feel that will hasten their recovery. Oftentimes that has proved to be wrong as well. But I guess the “non-starrer” Indian cinema is believed to be independent. So it’s a difficult process to get a huge budget for them but I’ve seen cases where producers have felt confident about the subject that they were making and they have invested large sums of money in it.

Imtiaz Ali: See I think as a movie maker, the advantage of a small format is that you can experiment more. You do not have the financial pressure. You can work with smaller camera and smaller units. So that’s the big advantage of the small format. In the large format, usually there is the possibility of a larger audience because that is a distribution setup that is already set up so to speak. So larger numbers of people can come to watch your movies and that is the advantage I see as a filmmaker. As an audience member, for the audience to watch short content, it’s much more convenient. They don’t have to go anywhere to watch the film. They can watch it where ever they are on their phones or computers. And it’s also invigorating. They can see more alternative stuff in the smaller format. But of course, the magic of going to a cinema theater and losing yourself for three hours is what happens with a long format or feature film.

Imtiaz Ali: Well I think that’s happening already. Because some movies that are believed to be alternative or independent or different are already doing much better than the others that are supposed to be more conventional.

Imtiaz Ali: Yes. Many movies like that. And many movies are supposed to be safe options when they begin but are no longer finding the same audience. The audience I think has taken the lead, as far as Indian cinema is concerned, and filmmakers like myself are trying to follow.

IIF: So do you think it’s moving away from the star system?

Imtiaz Ali: Well the star system, as such, is under challenge in a way because high content is getting more appreciation than before. But also, people are becoming bigger stars. Like a Salman [Khan] movie is a Salman movie and people will just watch it. So I think like in any product, in the product life-cycle of Indian movies we have come to a phase where the market has expanded and where different kinds of products or different kinds of movies are getting interest simultaneously. It’s not as though people are satisfied to see one kind of film. If you look at me as an audience member then you’ll see that I watch all kinds of films in the same theater hall. And I think the Indian audience wants different kinds of cinema within the week. So that’s a great thing for us.

IIF: So what are you working on next? What’s going on with your next project?

Imtiaz Ali: I’m writing a story now. So I guess when it gets over I’ll start making it. I don’t have a hard plan as of now. I’m just waiting for the script to complete itself.