By Pankaj Sachdeva
I remember an interview in which director Ashwini Iyer Tiwari had talked about her favorite scene from Hrishikesh Mukherjee’s Abhimaan. She spoke about the last scene of the film where Uma and Subir sing together on stage after going through a conflicting phase in their marital relationship. Ashwini mentioned that she was immensely moved by the performance of Jaya Bachchan. In her latest film Panga, Ashwini Iyer Tiwari remembers Jaya Bachchan again by naming the lead character after her. Jaya Bachchan took a break from working in films at the peak of her career to take care of her kids. She made a comeback to films after a gap of nearly eighteen years in Govind Nihalani’s Hazaar Chaurasi Ki Maa. Panga is also a comeback story of another Jaya (Kangana Ranaut), a top-level kabaddi player, who takes a break in her career to care for her prematurely-born son, and successfully manages a comeback to the sport at the age of thirty-two after an eight-year gap. 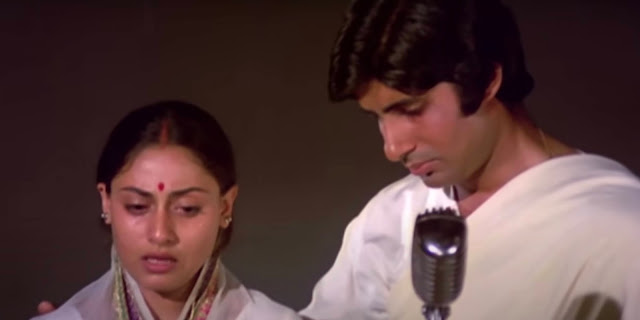 In Shimit Amin’s Chak De India, there was Vidya Sharma, the captain of the Indian hockey team, who went against the wishes of her family to play for her team. Her family was happy with the government flat she initially got them but now they wanted a traditional bahu. In Gauri Shinde’s English Vinglish, there was Shashi Godbole, an entrepreneur who sold laddoos but was ridiculed by her family for not being able to fluently converse in English. She craved respect from her family. “Mujhe pyaar ki zaroorat nahi hai, zaroorat hai toh sirf thori izzat ki,“ she says. In Suresh Triveni’s Tumhari Sulu, there was Sulochana Dubey, a homemaker, whose family completely supported whatever she wanted to do in life but she did not have a specific goal. She wanted to do everything. “Main kar sakti hai,” she used to say. In Panga, Jaya, a former sports player and now a clerk, has a lovely family but what she craves is respect from her self. When she looks in the mirror, she is not happy because of what all she could have achieved in life. When she sleeps, she dreams about kabaddi. Jaya feels that she has lost a part of her. Panga gives her a second chance to get that part back. And, with a combination of luck with having a supportive husband, and through her hard work, Jaya grabs the chance to achieve her dreams. 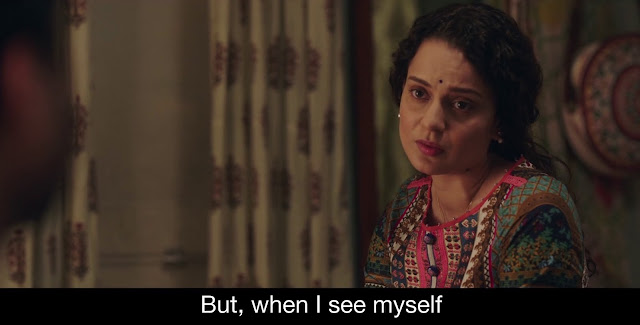 Ashwini Iyer Tiwari has earlier made Nil Battey Sannata which was also based on the theme of dreams. Nil Battey Sannata told us, “Asal mein gareeb wo hota hai jis ke pass koi sapna nahi hota.” Panga believes, “Jo sapne dekhte hain woh panga lete hain.” Both Panga and Nil Battey Sannata are essentially about the dreams of mothers and the lengths they go to fulfill them. What differentiates the two films is about whom the mother dreams about. In Nil Battey Sannata, there was Chanda, a domestic help, who dreamed that her daughter Appu goes onto achieve something big in life. She does not want Appu to be a house help. Appu did not like her mother’s interference in life and felt her mother was imposing her own dream on her. “Khud toh apni zindagi mein kuchh kar nahi payi aur ab apne sapney mujh par thop rahi hai,” Appu says to her mother. In Panga, Jaya wants to achieve her dreams but they are about her own self. She struggles because she cannot come around to the idea of fulfilling her personal dreams at the cost of taking care of her son. “Main ek maa hoon aur maa ke koi sapne nahi hote hain,” says Jaya to her friend Meenu. It is then her family who coaxes her giving the final push she needed to achieve her dream for playing again for the Indian team.

Panga is full of little details. Jaya is still known by her maiden name—Jaya Nigam. Her husband’s last name is Sachdeva, but we never hear Jaya being called by that. Jaya’s mother, played by Neena Gupta, has the same frazzled hair as Jaya. Like mother, like daughter. Life without Jaya becomes a struggle for her husband Prashant and her son Adi and this is seen in the food pictures. The bhindi ki sabji is replaced by greasy aloo ki sabji when Jaya goes away. A perfectly-shaped paratha made by Jaya takes a new shape when made by Prashant that makes their’s son appetite go away just by looking at it. When Adi took part in a sports competition, Jaya was not able to attend it and he is dejected. That is why it important for Adi to be there when his mother plays the game.

There is a lovely moment in Panga that shows how the framing of a scene can add to the narrative. After Jaya decides to let go of the opportunity to play in Kolkata, she is working in the kitchen and the camera frames her in one of the squares of the grills in the kitchen window. Her husband Prashant comes in and talks to Jaya. He is framed in the other square of the grill. As Prashant tries to convince Jaya to go to Kolkata, he gradually moves from his square to Jaya’s square conveying the theme that he has come around to her side. The audience sees this scene from the outside. I had put this point as a tweet and Ashwini Iyer Tiwari saw it and affirmed the thinking behind the scene on her Instagram profile. 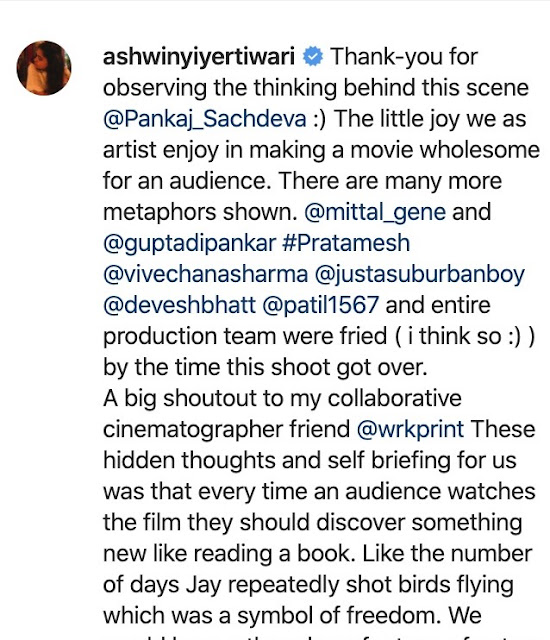 A particular motif that can be seen at different stages in Panga is the presence of shoes. Throughout the film, there are a number of scenes that involve shoes. Early in the film, the friendly neighbor Bhabhi puts to dry a pair of washed red shoes. The locket that Jaya wears also has red shoes. During the training, Meenu offers Jaya a pair of shoes. At another point, the camera focuses on the canvas shoes when Jaya makes her son ready for school. Later, there are many other shots where Jaya takes out her shoes. Jaya and her mother keep saying to Adi, “Joota khayega.” To my mind, this repeated focus on shoes seems to be a kind of message to keep running after your dreams. 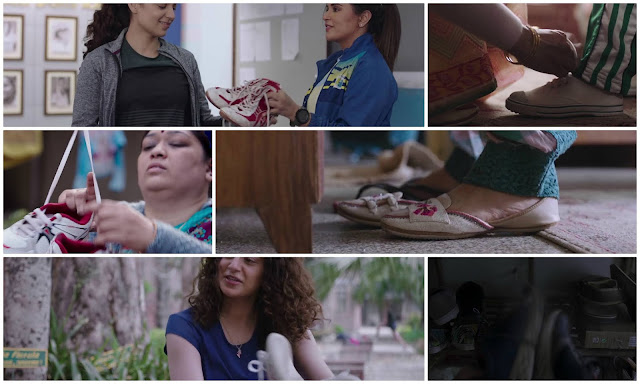 Notice her locket is also a shoe 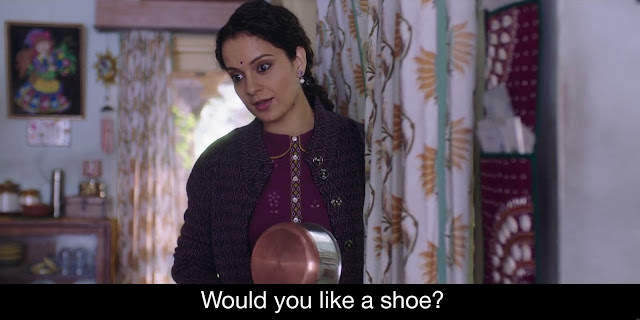 At some stage in the film, Meenu shows Jaya a challenging flip move to escape from the opponent team’s grip. Jaya calls it the Tiger Chan move—a combination that requires the skills of Tiger Shroff and Jackie Chan. Jaya believes that she cannot execute it due to the limitations of her body. But in the final match in the film, she performs the same Tiger Chan flip to win a victory for India. I thought about Dangal while watching this particular scene. In Dangal, when Mahabir Phogat trains his daughters, he teaches them about flipping the opponent in a rainbow-like arc that can instantly award the player five points. Towards the end of the film, Geeta remembers the same technique and performs it in the nick of time to win a gold medal for India. Another aspect that reminds of Dangal is the coach. The villainous coach of Dangal who even locked up Mahabir Phogat finds some kind of redemption in Panga where he is actually supportive of Jaya. 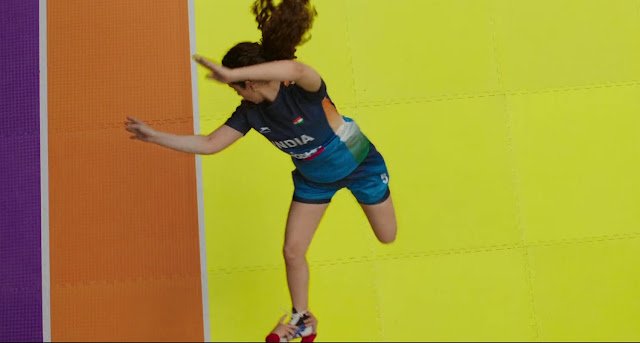 In the second half, Panga slows down a bit. It also feels such because Jaya was not playing, so a sense of waiting crept in as to when will she play. She gets a chance only in the final moments of the film. What keeps the film going is the performances by all the cast members. Richa Chadda is terrific as Meenu. Jassie Gill, who has one of the most infectious smiles, and Yagya Bhasin deliver great performances. But, unsurprisingly, it is Kangana Ranaut who again portrays Jaya splendidly. Her offscreen persona is so different yet she feels much in control in this role.

Jaya works at the railway station, sitting behind the glass walls, selling tickets. But Jaya is not content with that. She wants to travel, too. During the kabaddi matches, Jaya does not play as she is as a substitute. Seeing this, her coworker says, “Apni gaadi outer pe hi khadi hai; platform pe aa hi nahi rahi.” Their train has been in waiting; it is not getting the green signal to come at the platform. Earlier, during one of the training sessions, Jaya’s friend Nisha advises her to hire a personal ‘coach’ again using the analogy of railways. She says when the journey is long and one is strapped for time, they should use a double engine. She asks Jaya to find a double engine that can help her. Meenu becomes that engine for Jaya. Jaya’s husband is an engineer in the railway coach factory, where he builds trains, like the support he gives to Jaya. When the train is ready, Jaya travels alone by herself, on a train, like a train. I think that is the larger point of the film—the importance of a support system to travel on the journey of dreams. Panga may be predictable but it is touches like these that elevate it, making it a memorable one. 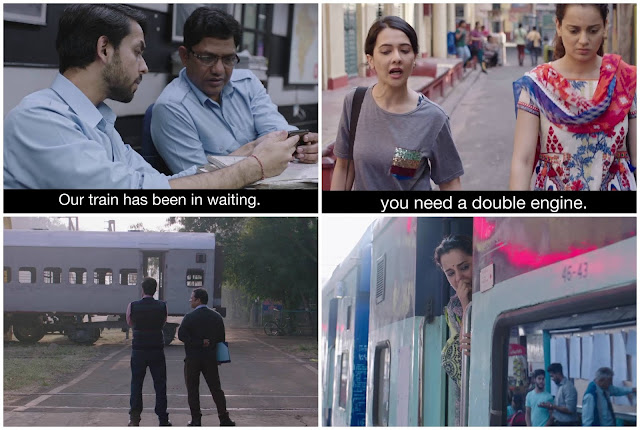