Kanwal Sethi’s atmospheric Once Again is a story of two middle-aged people Tara (Shefali Shah) and Amar (Neeraj Kabi) who fall in love once again. Tara is a businesswoman who runs a restaurant and also supplies tiffins to people. Amar, a famous actor, is one of her clients. Tara and Amar develop a relationship over food and notes they exchange with the tiffins. Tara is a widow who lost her husband years ago and has two children—a son and a daughter. Amar is a divorced man and has a daughter. After the news of their relationship comes out, they face some challenges in their relationship with each other and with their children. The film is an Indo-German production and had a digital-only release on Netflix. 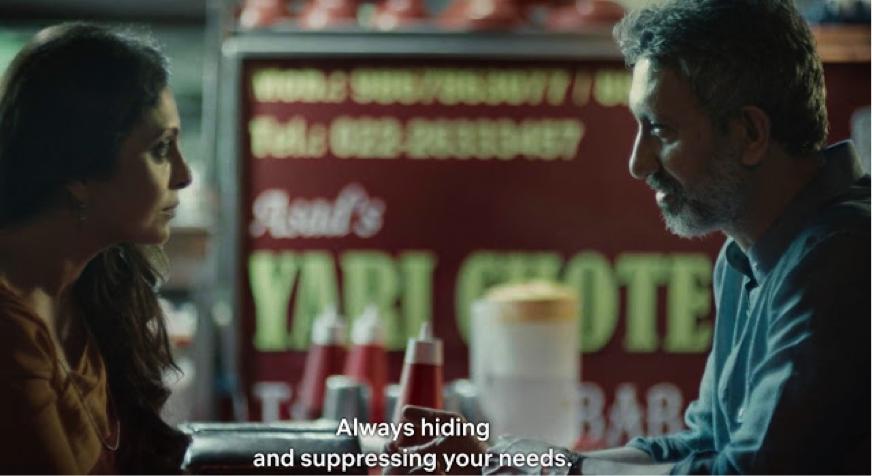 Once Again portrays an old-school romance between Amar and Tara. They have mobiles but prefer to communicate through the landlines. They can send texts to each other but prefer handwritten letters. The kitchen in Tara’s restaurant consists only of traditional types of equipment. When Tara has to grind chillis, she uses a mortar and pestle (a silvatta). When she has to mix something, she uses a hand mixer. When she has to cook fish, she uses a furnace where she puts the raw fish wrapped in banana leaves and covers them with sand. When she sends food to Amar, she uses a Mangalorean-style brass tiffin box. All these elements give a different old-school feeling to the relationship between Amar and Tara. 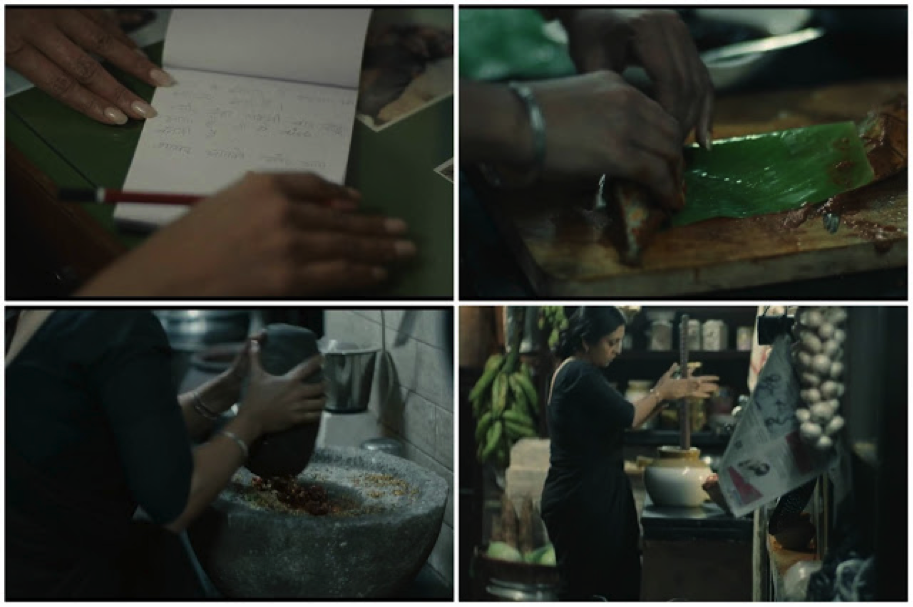 In addition, Amar and Tara keep talking about first times—Pehli Baar. Amar’s first film that gave him his identity as a star was titled Pehli Baar meaning the first time. After Tara meets Amar for the first time, she writes a letter to him mentioning that in her culture, when someone visits them for the first time, it is customary to make a special dish. Later, Amar takes Tara to his favorite spot where he tells her that it is the first time he has come with someone. When Tara takes him on a drive to the streets of Mumbai, she reminisces the first time she came to that place as a kid. They both might be doing some things once again, but it is the first time that they are doing those things with each other. They fall in love once again but it feels like the first time. No wonder Tara likes to sing the lovely song from Barfi!—Phir le aaya dil majboor, kya keeje. Once again, the helpless heart has brought me here. 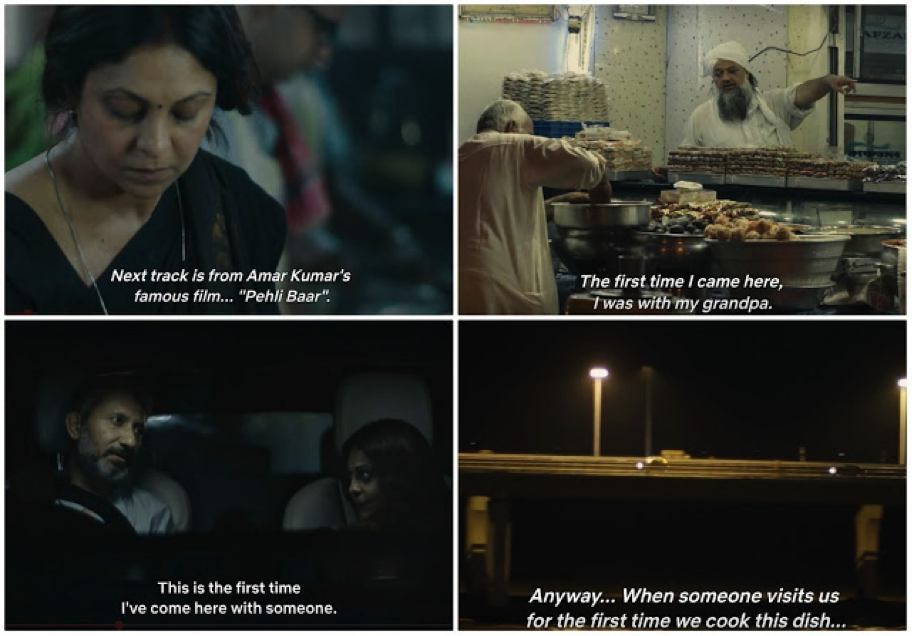 Amar is working in a film in which he is playing the character of a ghost. It is as if elements of this ghost’s story mirror those of real-life Amar’s. When Tara and Amar go on a drive, he tells her that while playing the role of a ghost, he has turned into one himself. At another point, Tara thinks that she saw someone watching her, her daughter replies that it might be a ghost. During a filmmaking session, Amar says that he is not happy with his own dance performance. He feels that the ghost is not dancing freely and looks more like a puppet. He had seen a group of men dancing on the road during a religious procession and wants to dance like them. The actress in his film tells him that he does not understand her role. The filmmaker adds that a ghost will turn into a human only after he falls in love and it is the woman who brings about the ghost’s transformation. During the same scene, Tara comes to visit Amar and he introduces her to his friends as someone who makes food for him. He insults her by reducing her role to that of someone whose only purpose in his life is making food for him. Like Amar does not understand the character of the woman in his film, he does not understand the importance of Tara in his real life. At an early point, Tara and Amar had a conversation where he says, “Khud ko hi dhoond ke kisi ko paya ka sakta hai.” Only when you find yourself, you can find someone else. Tara replies, “Shayad kisi aur ko paakar khud ko dhoonda ja sakta hai.” Maybe one can also oneself by loving someone else. It is this learning that Amar has to realize both in his film and in his life and then only he can transform himself from a ghost to a human. When he finally understands this, Amar dances uninhibitedly with the same boys he had seen earlier during a religious celebration and turns into a human. He realizes his folly and goes to apologize to Tara. He says that he does not want to hide his own self anymore. He has understood what Tara is to him. In this sense, Amar’s character is the middle-aged version of the lost protagonists created in the films of Imtiaz Ali and Ranbir Kapoor. In what is a curious coincidence, the woman who helps Amar find himself here is also named Tara (like Tara from Imtiaz Ali’s Tamasha). 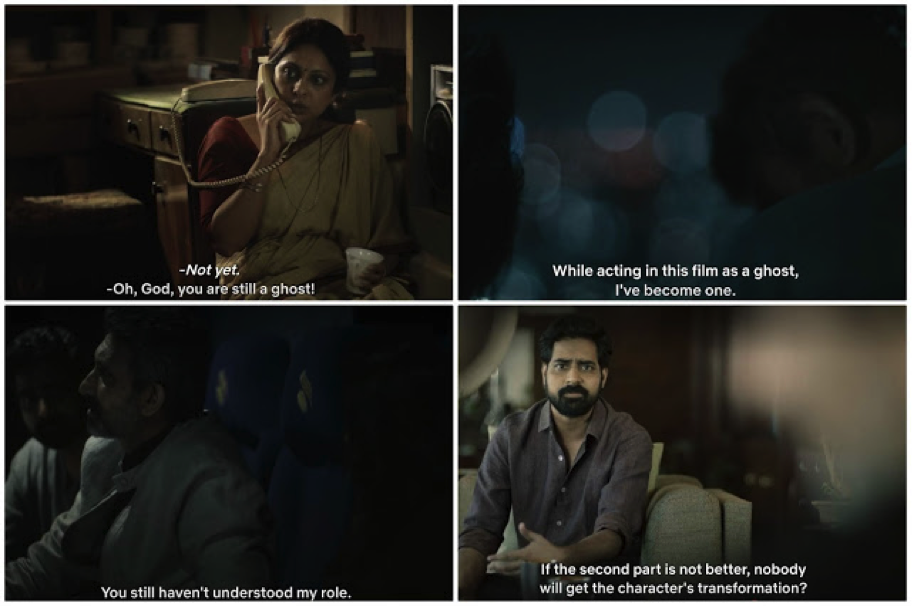 In some scenes of the film, there is a kind of similarity in the actions of Tara and Amar. Early in the film, Tara takes some face cream and applies on her face while standing in front of the mirror before she goes to sleep. In the next scene, Amar is doing something similar where after a night shoot, he sits in front of the mirror and his make-up man cleans his face. In another scene later, it is seen that Amar washes his hands after having dinner and cleans himself, and moments later, Tara does the same after she finishes making the food mirroring Amar’s actions. Further, at another stage in the film, Tara is seen playing with a glass of water, and a few scenes later, Amar is playing with water while sitting near a swimming pool. Additionally, the film shows some similar character traits in Tara and Amar. Both Tara and Amar like ghazals. While cooking food, Tara sings a few lines from the poem Dard Se Mera Daman Bhar De by Qateel Shifai. When Amar is driving, he listens to the poem Main Khayal Hoon Kisi Aur Ka by Saleem Kausar. Tara is afraid of the sea, Amar is afraid of the mountains. 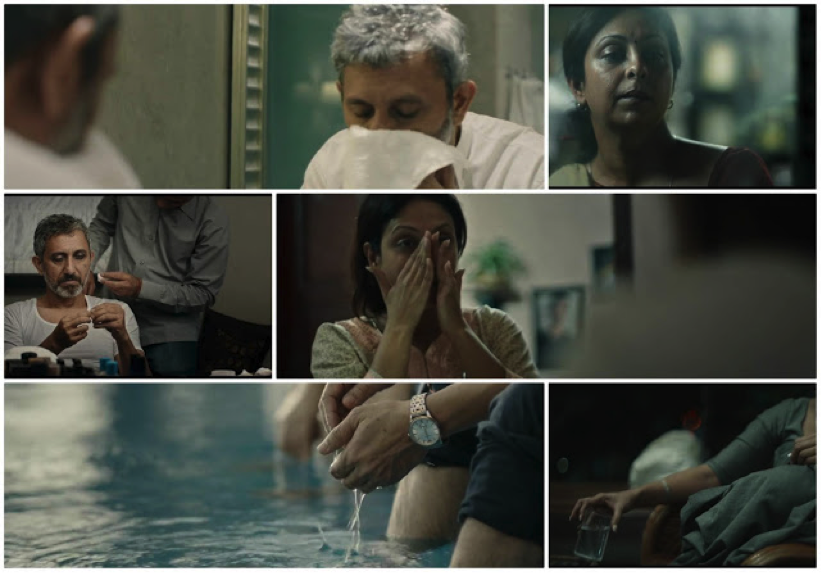 After the death of her husband, Tara gave up everything she liked. She never married again. She runs the restaurant on her own. She never danced again. She tells her daughter that many a time, she thought of running away but did not do so for the sake of her children. Tara suppressed all her desires for all these years. Middle-aged people also have desires but society believes in suppressing them. Her son’s mother-in-law sarcastically remarks that for them, the happiness of their kids is more important than their own. Tara’s son did not like her mother’s relationship with Amar. The daughters, on the other hand, were more open and happy for their parents. Tara was lonely. She found companionship in Amar and liked to talk to him. Being with Amar makes her feel beautiful again. After he gives her flowers in their first meeting and tells her she is beautiful, she comes to the restaurant and adjusts her hair as perhaps after years, someone noticed her. All through the film, she is often found near mirrors and looking at herself in the mirror as if wondering something. After Tara and Amar get physically intimate, she comes home and looks at her naked body in the mirror. Someone touched her after years that brought out her old self once again. She brings out her ghungroos. She was afraid of the sea, but in the end, she goes on the sea as she is no longer afraid of it. Like Amar, Tara undergoes a rediscovery of herself. 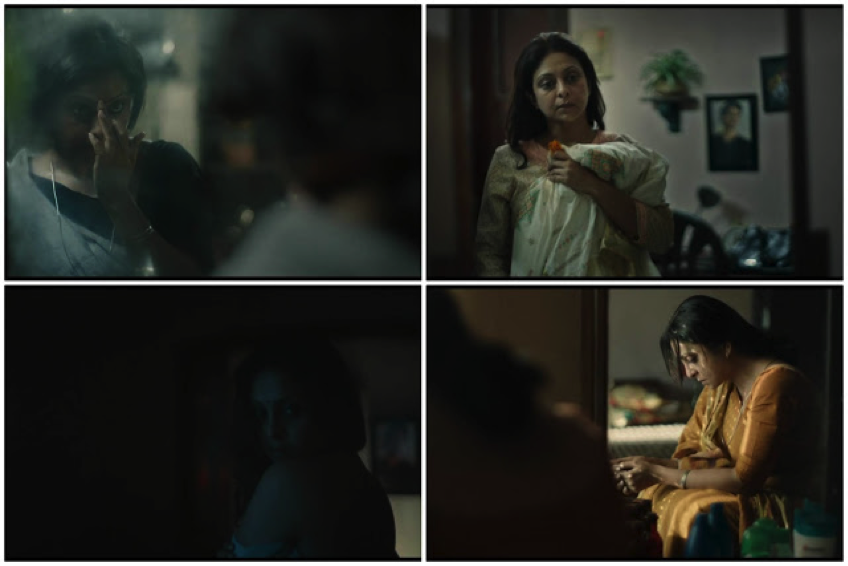 In terms of plot, there is not much happening in the film which causes its pace to drop. There are some long shots, such as characters looking out of the window or driving on the road, which make the film to drag at places. It is largely an atmospheric film. The other characters also are not as well developed. However, it is the performances of Shefali Shah and Neeraj Kabi that hold the film. Shefali Shah has always been such a terrific performer and here as well, she is the best thing about the film. She looks lovely in the film. The sarees, the pencil in her bun, the flowers, the smile—she carries everything with a lot of elegance.

In the opening lines of the film, Amar says that Mumbai is a strange city. The sea seems so close, yet so far. Tara said she was afraid of the sea. The film ends with Amar and Tara on a boat in the sea. They have finally been able to reach the sea that seemed distant or fearful to them. It is not clear where they are going, perhaps it is Manori. But the important thing is that they are together on this journey, much like on the journey of life itself. And, navigating the uncertain waters of the unknown future becomes less challenging with a decent companion alongside.