For the love of “Love and Shukla”

I met Amanda (Mooney; co-writer, producer) a few years back when we shot a documentary project together, just before she shifted to India. At that time, we were both doing a lot of commercial work. She is an associate creative director at Edelman and I was shooting mostly corporates and ads. I had just finished what I thought would be my first feature script, a story called Kailasa, but the process of finding a producer and known actors who’d take a chance on me seemed unending. There were a lot of false starts that of course come with the territory of trying to make anything, especially if you have no connections, no money and nothing but your ideas.

Amanda and I became close friends, and we talked a lot about the stories we hoped to one day have the chance to tell. These conversations always come with a very real fear that maybe you won’t ever be given that chance.

One night, after probably too much wine, we decided that we wouldn’t wait for someone to give us money to make a film. We’d produce a story that we could manage in a small budget with our own savings. I had previously written and made a short film, The Artist, a few years back for a budget of $100 USD that premiered at Busan (Film Festival).

We were completely naive about what it would actually take to make a feature on our own but we just started writing. It costs only a few hundred rupees to buy some printer paper and ink, so that was where we started.

It’s very strange to consider ourselves producers. I had only a little more than what I needed to pay rent at the time and Amanda’s still trying to pay her student loan bills in the US. We placed what many people in the industry would see as a very modest bet on our story, but to us, it was a huge investment. We knew it would probably be an imperfect start and we were sure we’d be rejected from every festival and any chance at a commercial release but at least we’d be making our film.

The story was inspired by a lot of the illl-informed questions we heard so many friends ask about sex and relationships, and an article in Mid-Day about the challenges many young couples face in joint family living after marriage.

We wanted to understand what it would be like to be so inexperienced in sex and relationships and suddenly thrust into what it is supposed to be the most important relationship in one’s life, all while having absolutely no privacy or space as a couple to get to know each other.

We spoke with a lot of people while we were writing. We heard the stories of other auto drivers in the city, and spoke with other couples who lived in small joint family homes after an arranged marriage.

It took us about four months to write our first draft. We cast mostly unknown, first time actors, many of whom were friends from FTII and were kind enough to take a chance on a project like this. For our lead, we always wanted Saharsh Kumar Shukla, one of our closest friends and a brilliant actor who’s been playing smaller roles in films like Highway, Talvar, Rangoon and Raees.

I directed and shot the film at the end of last year, using 1DC, 5D and minimal lights and equipment over a period of about two weeks. We were lucky to have a crew of friends who came on board to help. Our music composer came through a friend of Amanda’s in Europe who agreed to do the film for no cost, only a small share should we ever turn any profit, and we conceptualized and developed the music over Skype.

Amanda, Srijan Chaurasia and I edited the film in my home because we had no money for a studio. 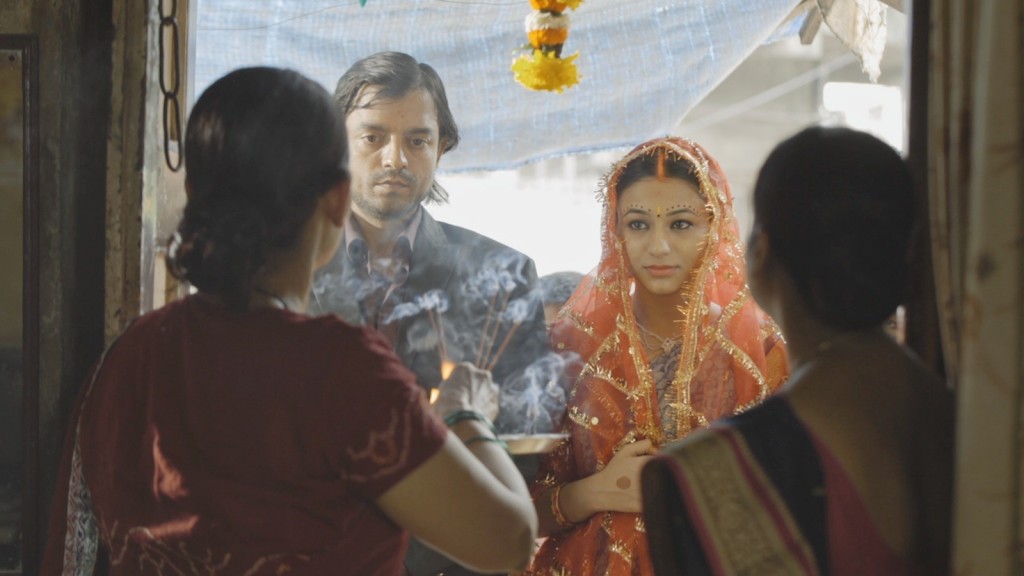 There were so many things that we weren’t prepared for, that put us right on the line of this completely not working. Paul Thomas Anderson gave an interview a few years back and said, “It’s a miracle any time a film is made,” and I think we tested that idea every day shooting without permissions, time or money and every night editing what we’d shot.

We were rejected by a lot of places at first. We didn’t have a studio backing our film who’d push it at festivals, nor did our film have the kind of polish that would easily stand up against larger budget entrants. But, we were really lucky that a few people came forward early on to support us. Ismail Basbeth, my roommate when I was an AFA student at Busan introduced us to programmers like John Badalu, who has been a huge supporter and instrumental to the opportunities we’ve had so far.

Gulbara Tolomushova and Hussain Currimbhoy were other early supporters who did everything they could to help promote our film amongst festival programmers.

We were completely surprised to be accepted by Busan, Tallinn Black Nights and BFI London Film Festival (ultimately we couldn’t screen at BFI because of our premiere status at Busan). We also expected that we’d have low turnout at the festivals, as we’d be competing for audiences with much bigger films. But, we were again surprised by houseful and near-houseful shows and audiences that stayed long after our screenings to ask questions and discuss the story. It was also nice to see that it resonated so well across cultures and ages.

Our NETPAC win in Indonesia was also a huge surprise. I was outside smoking when the award was announced because I was sure we had no chance.

I have no idea what will ultimately happen with our film but Amanda and I have just started researching and writing our second film. We only hope that we have enough success with Love and Shukla to fund that film too.

Shukla, an auto driver from an orthodox Brahmin family, has never intimately known a woman other than the celluloid starlets he watches every day on the 4 inch display of his mobile phone. When his mother arranges his sudden marriage, Shukla and his new wife face the experience of so many couples in Mumbai: a new marriage, no experience in a relationship and a joint family love nest that offers no space for sex, much less a conversation. Their only respite is a line of old suitcases set up by his father to separate them from the family, a cell phone and a city of 18 million eyes.