If I could be given a chance to become a fly on the wall in a film song, Yoon Shabnami from Sanjay Leela Bhansali’s Saawariya will be on my list for sure as I feel it is one of the most splendidly choreographed songs in the last few decades. Words fail me to describe the sheer pulchritude of the song that is so stunning in both its conception and its execution. The song is picturized on the occasion of Eid where Raj (Ranbir Kapoor) plans to tell Sakina (Sonam Kapoor) that he loves her. In the song, Raj sings that the moonlight has never been as ravishing as before, and when the moon saw you (his lover―his saawariya), it got confused. Yoon shabnami, pehle nahi thi chandani. Like the other people who are waiting for the Eid moon to appear, Raj is calling his lover to come out and meet him. The men are looking towards the sky; however, Raj is the only one looking in the other direction. He points to the other men that the moon has appeared but he does not look at it for long because his moon is not the moon of the sky, but Sakina. She had been glancing towards the sky from her balcony (waiting for her saawariya), and at that very moment when the moon emerges, Sakina comes out from behind her veil. Raj is ecstatic because his moon Sakina has appeared, and her beauty makes even the other moon feel shy. The one sight of his saawariya is enough to make him forget the gorgeousness of the celestial moon, and lose himself in her. Kho gaye tujh me hum iss kadar. 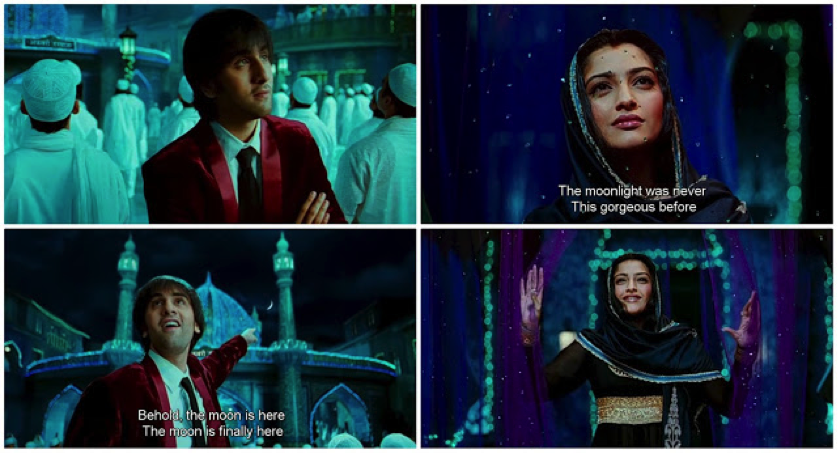 In the song, all the other men are dressed in pure white, but Raj is dressed in a red-velvet blazer making him stand out from the others. The color red is the color of love, and Raj gives a stole of the same color to Sakina, that epitomizes his deep love and affection for her. She accepts the present and wears it, in a way almost accepting Raj’s love assuming her lover Imaan (Salman Khan) is not coming back. However, Imaan arrives and waits for Sakina at the bridge. When Sakina sees him, she runs towards him, and the stole that Raj gave to her falls down from her shoulders, conveying to us the fate of Raj’s one-sided love. Raj’s moon Sakina goes to her saawariya, but his memories of her are enough to make him live through his life 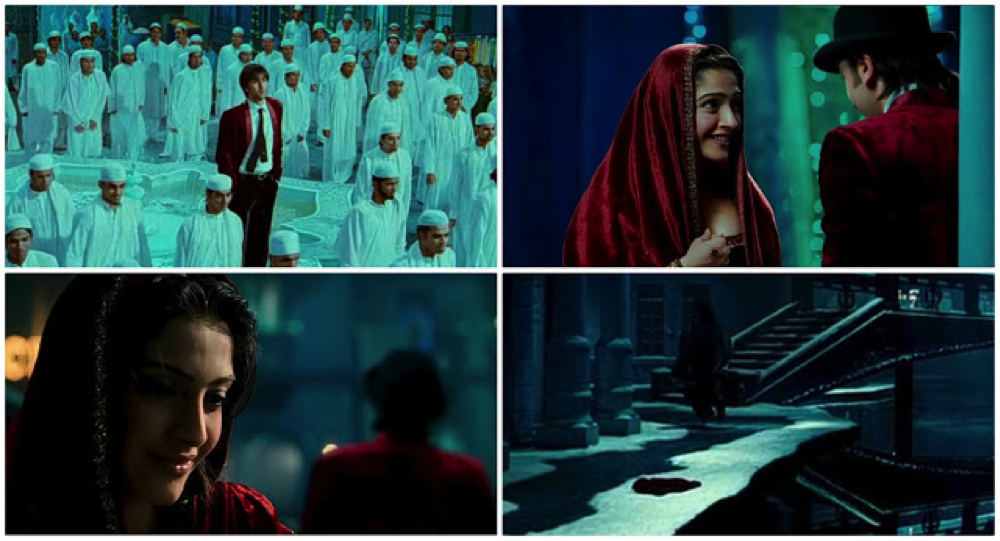 The moon is, in fact, yet another recurring theme in the oeuvre of Sanjay Leela Bhansali. In almost all his films, the moon makes a special appearance of its own. In Hum Dil De Chuke Sanam, there is Chand Chhupa Badal Mein, where on the festival of Karva Chauth, all the women, including Nandini (Aishwarya Rai), are waiting for the moon to come out in the sky. Karva Chauth is the festival where Hindu women keep a fast for the long-life of their husbands and break that fast only when the moon is out in the night sky. Nandini reminisces about her lover Sameer (Salman Khan) with whom she was on this day last year. The women sing, “Aaja re aaja chanda ki jab tak tu na aaye ga. Sajana ke chehrein ko dekhne ye man tarsa jayega.” Come Oh Moon! Show Yourself. Till the time you won’t come, this heart shall be thirsty to see the face of my beloved. Sameer tells them, “Na chanda tu nahi aana. Tu jo aaya toh sanam sharma ke kahi chala jayena.” No, no, Moon, don’t come. If you come, then maybe my love will go away feeling shy. 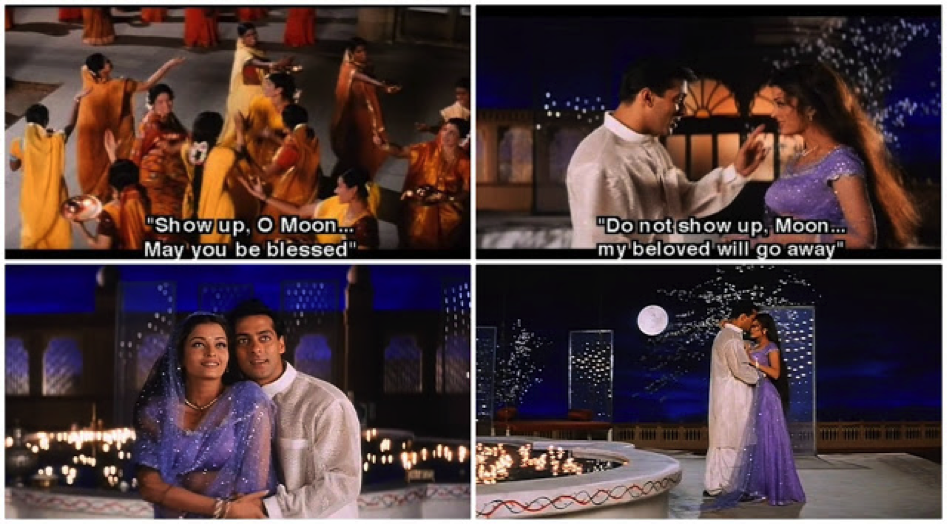 In one of the earlier posts, I had mentioned that Saawariya was a contrast to Hum Dil De Chuke Sanam in which Sakina rejects a musician Raj (similar to Sameer) for a more brooding Imaan (Vanraj). In Hum Dil De Chuke Sanam, Vanraj (Ajay Devgn) takes Nandini back to her lover. In Saawariya, Raj tries to stop Sakina from going to her lover. It is interesting to note that the lyrics of Yoon Shabnami also paint a contrast to Chand Chhupa Badal Mein. In both the songs, people are waiting for the moon to come out. In Yoon Shabnami, Raj sings, “Chaand woh bharma gaya, tujhko dekha toh sharma gaya.” The moon got really confused and felt shy when it saw you (his lover). This is quite the opposite of Chand Chhupa Badal Mein, where Sameer is asking the moon to not come out because then his lover will get shy on seeing the moon. “Tu jo aaya toh, sanam sharma ke kahi chala jayena.” In both the songs, the singer sees his beloved in the chandani―the moonlit night. Chandani raat mein har sajani apne sajana ko dekhe ki. In the moonlit night, every woman shall see her beloved. Yoon shabnami pehle nahi thi chandani. The moonlit night has never been gorgeous before. When Chand Chhupa Badal Mein ends, Nandini holds the sieve through which the women see their husbands to break the fast, but she avoids making an eye contact with Vanraj, because he is not her lover. It is a testament to our syncretic culture that the moon is used by Sanjay Leela Bhansali on two distinct religious occasions―Eid in Islam and Karva Chauth in Hinduism―to convey a similar underlying message. This has also been seen in his other films, such as Bajirao Mastani, where he tries to present the implicit similarity of religions. Usi Durga ki murti ko sajaate waqt hare rang ka chooda, hare rang ka shalo, aur hare rang ki choli pehnaate hai. Durga idols in temples are often adorned in green (the color often used to represent Islam). And, both the songs in the two films have a peacock symbol in them which is another Sanjay Leela Bhansali trademark. His films often contain peacocks. There are peacocks drawn on the walls in Yoon Shabnami; while Nandini sings, “Saawan ki rah jaise dekh mor hai.“ Just like the peacock is in search for rainfall. 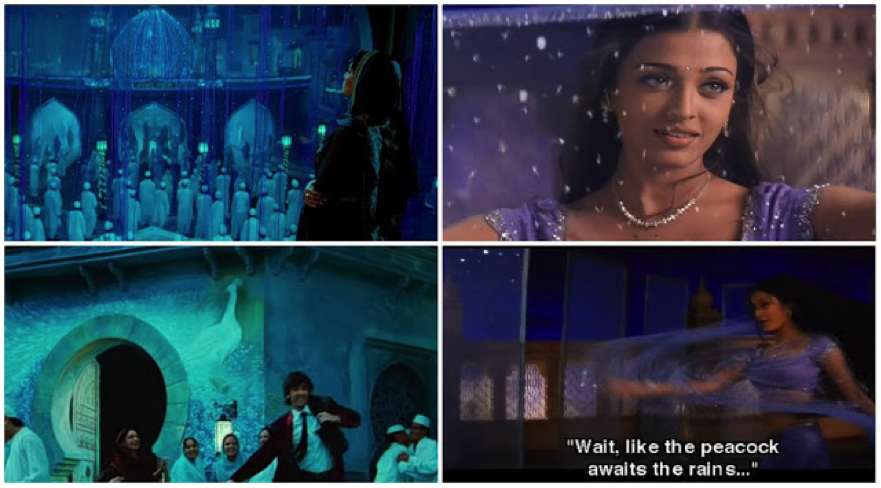 In Devdas, Dev (Shah Rukh Khan) goes to meet Paro (Aishwarya Rai) after he comes back from London. It is for the first time that they both will be seeing each other as adults. Paro is compared to the moon in the film. When Dev enters her room, she does not show her face and tells him that she is like the moon, and she fears that when he will see her, he will become breathless. Dev tells her that even the moon is not as vain about its beauty as she is. She replies to him that it is because the moon has scars, and she is flawless. He goes away from her room informing her that he will see her face at moonrise. In the night, when the moon is out, Dev goes to Paro’s place, where she is sleeping in the courtyard. In a spectacular scene, Dev is stunned to see Paro’s face juxtaposed with the full moon, leaving no doubt that Paro is indeed as celestial as the moon. He smiles to himself after he finally gets to see that luminous face. He takes some soot from the burning diya next to her, and puts it on her lips, giving her a nazar ka teeka to prevent her from any evil eye. Then, there is the song Woh Chand Jaisi Ladki that is based on these scenes in which the lover is yet again comparing his beloved to the moon and is waiting for one glimpse of hers to give succor to his torturous soul. Woh chaand jaisi ladki, iss dil pe chhaa rahi hai. Mera chaand baadalon mein kyun jaake kho gaya hai. That girl, who is like the moon, is gaining over this heart of mine. Why has my moon gone into the clouds and gotten lost? Dev’s other worshipper Chandramukhi (Madhuri Dixit) is also related to the moon as she is named after the moon itself. 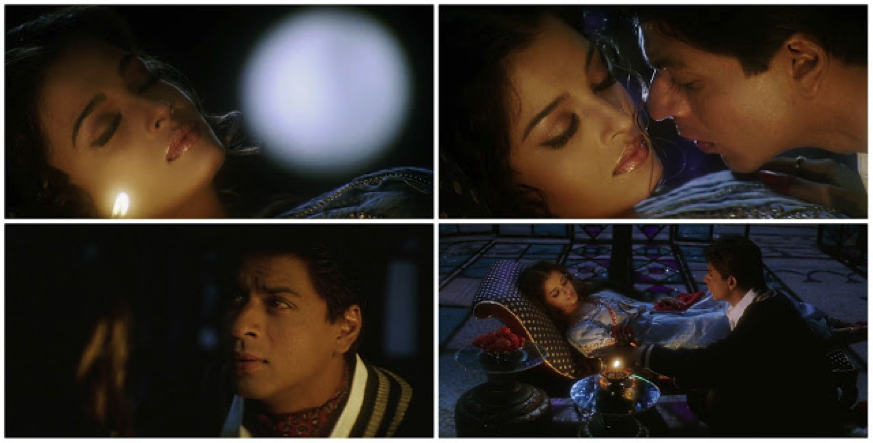 Paro is the moon

In Bajirao Mastani, a desolate Kashi (Priyanka Chopra) is coming to terms with the realization that her husband Bajirao (Ranveer Singh) has found a paramour in Mastani (Deepika Padukone). At some point in the film, Kashi is sitting by herself in Shaniwaar Wada with her gaze transfixed in the direction of the moon. When Bajirao comes to meet her, she tells him that she is observing the moon, which is trying to hide between the clouds. Yeh chaand bhi na, kabhi iss badli ke peeche, toh kabhi uss badli ke. Here, she likens Bajirao with the moon, and subtly makes a statement that he is hiding something from her, and she is aware that he is spending his time with Mastani as well. Later, in the song Pinga, Kashibai compares the arrival of Mastani to the appearance of moon. She sings, “Dekho mere piya ki sanwari, jiya se banwari. Mere angna mein dekho aaj khila hai chaand.” Look at my beloved’s innocent sweetheart. She is at my door like a full moon. Thus, the film again highlights the presence of moon and compares Bajirao and Mastani to the moon. In Marathi culture, the women and the men often wear a crescent moon symbol called a chandrakor on their forehead as well. In Pinga, Mastani also wears a chandrakor for the first time, while Kashibai expectedly wears it throughout the film. 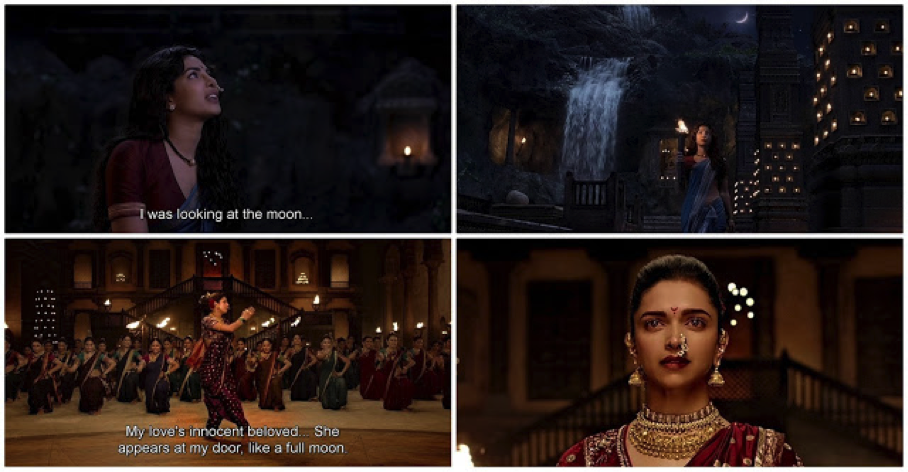 There is something similar related to the moon in Goliyon Ki Raasleela Ram-Leela as well. There is a song Poore Chand in the film that did not make it to the theatrical version of the film. Since the song does not appear in the film, it cannot be said for sure but it can be conjectured that it is most likely sung by Ram (Ranveer Singh) for his Leela (Deepika Padukone). Here, the singer compares the night of a full moon to his lover’s face, and describes the movements of her beautiful face. “Poore chaand ki ye aadhi raat hai. Tere chehre pe aa ke ruk jati hai.“ This is the mid of a full moon night. It comes and stops at your face. In another moon sighting in the film, after Ram and Leela elope to get married, a full moon shines brightly behind as Ram walks towards Leela to consummate their marriage in Ang Laga De.

There is the moon in Guzaarish, as well; however, the context is a little different. While the earlier mentioned films compared the lover to the moon, here, the moon is compared to life itself. The song Chaand Ki Katori calls life as a cup of moon. “Saare taare ek taraf, zindagi batori hai. Chaand ki katori hai, raat yeh chatori hai.” All the stars on one side, have collected the life. It’s a cup of the moon, this night is an epicure. The moon has been a common trope in films; however, it holds a special significance for Sanjay Leela Bhansali, given its repeated sightings in his filmography. There is no doubt that even in his future films that the ever resplendent moon (like the peacock, another symbol of resplendence in his films) would grace us with its presence in some form or the other. After all, a filmmaker known for his magnificent films is an innate partner of that celestial object that is often described as the epitome of beauty in the universe.