Hardik Mehta: Musings of a “Mindie”

From Gossip Girl to Godfather (yes, I used them in the same sentence), the one universal truth we’ve been taught – power and privilege reside in the hands of few. For the unchosen, the options to survive are to adhere, rebel or hold your own ground.

Hardik Mehta is a fine example of how to merge and learn from the “mainstream” and still carve your own niche. He has worked with the likes of Dev Benegal, Pankaj Kapur, Vikramaditya Motwane, Vikas Bahl, and yet the resounding success of Hardik’s shorts and documentary have earned him his own share of laurels.

With an intriguing career path, Hardik’s unmissable desire to explore and evolve is literally the stuff inspirational movies are made of: a die hard cinephile, born in Rajkot, studied Dairy Technology in Anand, struggled at a Dairy in Surat, worked in advertising, pursued Film Studies in Delhi, landed in Bombay to assist established directors to become one of the most promising independent film makers in India.

Here, he shares with us anecdotes from his life, his experiences with mainstream and indie, while dropping valuable pointers on how an outsider survives (and thrives) in Bombay:

Were there unmistakable signs that you were destined to be a film-maker?

HM: My childhood was basically spent watching potboilers of the ’80s and ’90s  – growing up in Baroda, the highlight of middle-class birthday parties was to watch these films. My favourite childhood film was Tridev. My father, a huge fan of Hrishikesh Mukherjee, used to say, ‘Aaj homework nahi karoge toh chalega, kyonki TV par Guddi aa rahi hai’.

During my B. Tech days in Anand, I used to watch a lot of movies. There was nothing else to do in the small town. I am talking about early 2000s when the saying, “In India you first become an engineer and then decide what you have to do with life” was still popular. Your parents might like films of Hrishikesh Mukherjee, but that doesn’t mean they’ll encourage you to join cinema.

After B.Tech, I got a job at Surat Dairy. After working there for two months, I decided to quit, and applied to advertising. I became a copywriter. It’s here that I learned a lot of basics about design, ideas, writing and visualising. I started renting DVDs and watched a lot of world cinema. During this advertising stint, I realised how all the arts – photography, music, writing -converged into the art of making cinema. So I decided to pursue filmmaking. I applied and got through the Mass Communications Course at Jamia Millia Islamia, New Delhi (of course I had to convince my parents why I had decided to study filmmaking). Jamia opened me to a whole new world of documentaries. I started going regularly to the India Habitat Centre for screenings. You can understand that for someone who had grown up on the likes of Tridev and Ghulam, this was a whole new world.

And what brought you to Bombay?

During my course at Jamia, we had a ‘Script to Screen’ workshop conducted by filmmaker Dev Benegal: one that taught us how to turn the written word into a convincing visual. At the end of the workshop, there was a pitching session where I managed to impress Dev. After the workshop, I decided to try my luck and ask him for some work, but Dev said that he will get back. And indeed, he did get back. Somewhere closer to my graduation, it was him who remembered me; he called up my Jamia professor and asked about me. He then invited me to work on ‘Road, Movie’ – a film that he was just about to start with Abhay Deol and Tannishtha Chatterjee . My work was script supervision, a role largely ignored in Bombay Cinema. But Dev Benegal gave it priority, so I had a lot to do.

How was the experience?

The film went to a lot of prestigious film festivals around the world. In India, though, hardly any people saw it. But to me the experience was absolutely worth it. I worked with an extremely talented director, was encouraged by the crew. Otherwise, nobody really gives any bhaav to newbies. Post ‘Road, Movie’, I decided to pursue script supervision, and met other directors. I landed up with Pankaj Kapoor’s ‘Mausam’ – a big-budget Bollywood mainstream film with stars and scale. Again the film didn’t work, but the chance it offered me to watch established technicians at work and hang around with big names, was invaluable. Between Road, Movie and Mausam, there were some rough days, but I learnt how to hang in there.

And the move from script supervision to film-making?

Udaan had released around the same time as Mausam. I managed to connect with Vikramaditya Motwane to work on his next, ‘Lootera’. This time around, my role was more significant. Vikram is reserved as a person, so I had to be quite outspoken. I had to get extra involved, keep asking questions to know what he’d approve of, and to figure out his approach to filmmaking. Lootera was a confidence booster and opened a whole new world to me.

In my opinion, Vikramaditya Motwane is one of the few who makes excellent contemporary Hindi cinema. I worked on the pre and post-production of Lootera. Post production is the best time to spend one on one with the director. You tend to get involved with editing, sound, background music, trailers, promos, colour correction, almost everything. I suppose that’s when he saw something in me to suggest, ‘Why don’t you make your own film?’ I showed him my first short, Chal Meri Luna (2010), and he loved it. He encouraged me to direct another short ‘Skin Deep,’ a story written by him. He had a few 16mm cans left from Udaan and asked me to shoot accordingly. This was 2013, when Naveen Kasturia and Aditi Vasudev were upcoming talented actors. They heard the story and said, ‘let’s do it’.

And then began your filmmaking stint?

Yes. Post my last job as script supervisor on Queen, we shot ‘Skin Deep’ in four days, and the post-production took 6 months. Shorty after its release, I happened to visit some relatives in Ahmedabad where I witnessed Uttarayan (the kite-flying festival) in full swing. I decided to film the festival in the spur of the moment. I shot over two festivals (2014-2015) and by October 2015, ‘Amdavad Ma Famous’, my first documentary, was ready. Since it wasn’t a documentary about social change, or about a particular issue, I wasn’t very confident about it initially. We wondered if the documentary audience would be interested in a young boy’s story during a kite festival. But much to our surprise, it was heartening when Nishant Radhakrishnan, editor of Dhobi Ghat, saw the first rough cut and texted, ‘It is like City of God In Amdavad’. We started sending it to film festivals. It’s now travelled to 75 cities and some major film festivals including HotDocs, PalmSprings, IDSFFK Kerala, Al Jazeera and many more. Still, my fondest memory was at the first screening at the film’s premiere in Budapest. The audience was smiling, but one guy happened to laugh the most. I was trying to understand what made him laugh so much. When the lights came on, we realised he is from India and couldn’t get over the Indian-ness of this film. 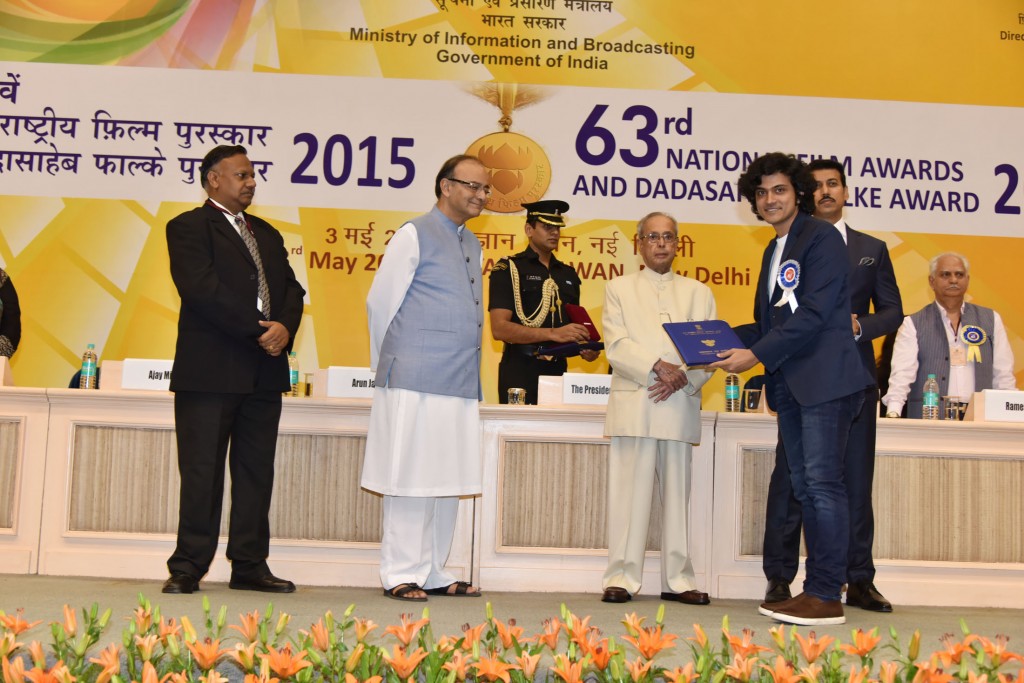 What about the response in India?

It premiered at MIFF (Mumbai international film festival). It drew a decent crowd, but it impressed Anand Patwardhan, who was in attendance. I was quite surprised that a person known to make serious documentaries actually liked ‘Amdavad Ma Famous’. After we won the National Award, Anand sir suggested we do a screening at Prithvi for Vikalp. My wife and I had informed our friends and family; we weren’t expecting a huge turn-out. But once we arrived at Prithvi, we barely made it past the aisle. Some 180 odd people had turned up in a hall meant for 100 people. That screening was incredible, the audience was in splits. There were people like Varun Grover in attendance, who tweeted about it and then the buzz began. 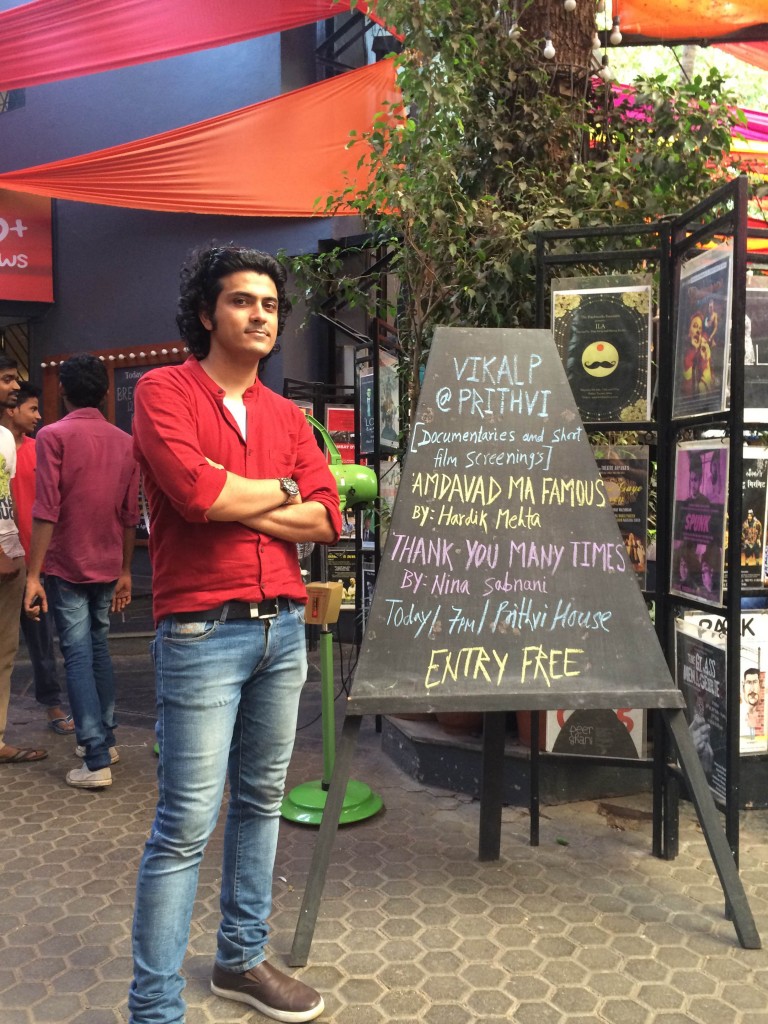 How did ‘The Affair‘ come about?

After the National Award that we received for Best Non-Feature Film, our film was invited to Paris by the French Academy of Cinema (Académie des Arts et Techniques du Cinéma), where every year they invite films and filmmakers from around the world who have received the highest honour from their respective academies or governments. So suddenly our film was amidst some elite company of Oscar, BAFTA and Cesar winners .The French Academy also requested participants to carry another short film about their city/culture that we can showcase there. While I was reading Manu Joseph’s book, an idea struck me about the couples who sit at Marine Drive. That’s what conceptualised ‘The Affair’. After showing it in Paris, when I returned, I showed it to Manish Mundra of Drishyam films and he absolutely loved it, so he decided to put it online. That’s how The Affair made its way to the web. Then it captured the attention of listicle sites and earned buzz with headlines such as ‘Watch this Bombay couple having an affair’.

You have valuable advice to share on distribution and exhibition of independent films.

Well, Skin Deep (2014) was released theatrically across India along with three other short films in an anthology called Chaar Cutting. Our documentary Amdavad Ma Famous (English: Famous In Ahmedabad) has traveled extensively to film festivals across the world and is now available on Netflix in 192 countries and is subtitled in 26 languages. The Affair has garnered over 2 million views on YouTube. But I don’t think I have ever set out making a film thinking ‘mujhe aisi film banani hai aur yahan dikana hai’ – that kind of “plan” corrupts the mind and sets you up for disappointment. My films have charted their own paths. Right now, it’s a great time to make your own film. There are so many avenues to shoot and submit. One has to be really lazy to still ‘want’ to be a filmmaker; the system has ensured you are a filmmaker, just make a good film.

I have grown to love Bombay. I tell my friends when you love a city, the city makes you feel special. I know many people who come to Bombay and start complaining about the struggle, the people, the networks. But once you embrace the city, it starts to look after you. I see it in simple things, when I’m running late and taking a local train to a meeting in town, the city ensures that I manage a FAST local train so that I happen to make it on time. Shooting in Bombay is a challenge, though. You either need to shoot on holidays or wee hours. But I’m a strong believer in Werner Herzog’s ‘grassroot’ style of filmmaking. So for me it’s a ‘just shoot, don’t take any permission’ approach and ‘Ask for forgiveness and not permission’ approach.

Hopefully, a fiction feature with a studio. And another documentary that I really want to make next year.