After winning the Cinematography award at the 2017 Sundance Film Festival, Rahul Jain’s documentary, MACHINES, made its Indian debut at the current edition of the Mumbai Film Festival.

Here’s Abhishek Gautam’s short chat with the reticent filmmaker, whose words seem to be sparse as those in his acclaimed documentary:

Tell us a little about yourself and your filmmaking journey so far.

RJ: All filmmakers are curious about the Human Condition in one way or the other. It is an absolute must. I am a curious being to my core’s deepest cell. Sometimes to my detriment. From a typical conservative Marwari family, and very confused about the extremely contradictory state of things around our holiest of lands, exploring the world through a camera and a cinematic language are a luxury I have chosen to go into. I hope I can be honest to my vision of the world and incorporate a horizontal worldview into my work that makes people think, question and wonder about the rock we live on.

Why did you choose the topic of Machines. I read your maternal grand father had a textile factory, but you could still have chosen a less “political” topic for your first documentary.

You don’t choose a film, the film chooses you. I would have made a similar film in any other factory — albeit textiles are beautiful to look at. I didn’t have any political incentives or motives, and hope one wouldn’t really need to make a film like this, but this is what I see, and this is what I feel, and thus I am compulsively commanded by those impulses as an artist and a human being.

Was it your intention from the start to showcase this stark jarring reality? How did you decide on the narrative?

I went into the unknown with no preconceived notions about what I thought the film was. The narrative found a way through the material we acquired to come to us after a lot of trial and error, and hundreds of permutations. 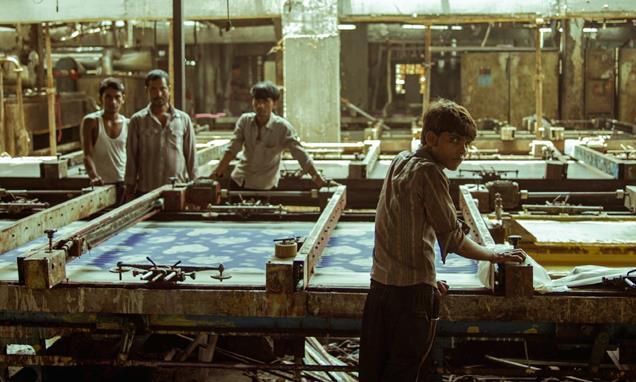 You have used minimal dialogues. Was this a conscious decision to show humans also in a drone like state of machines? You have said you recorded many more interviews. Why choose to show only a few of them?

Because Less is more. I could keep using everything I had, but really tried to rarefy the context coming from the people.

How did you build the trust and comfort factor with the workers and the factory owners to let you show the this harsh grimy reality?

I was able to establish a kind of intimacy by my honest and sometimes opaque exposition. Just like directors direct actors, I was directing my subjects to be as voluble as they could be about what they felt.

Is there some aspect you still wish you could have or should have explored more?

Absolutely, there always is. If any filmmaker makes that film which makes them feel they said it all, then what would they have left to make?

What are your plans ahead?

A few different ideas fermenting inside my head. They pertain to the endemic problems that we all face but not give enough thought to — thank god for art, and perhaps engineers, doctors and scientists?